FiiO’s M11 Pro is a challenging technological tech fest that can do it all – if you know how to do it. Chinese FiiO make a wide range of hi-resolution portable audio players that have come to dominate the market by offering great performance at low price, our reviews have shown. The M11 Pro, I’m reviewing here is the pinnacle – and boy is it complex. What FiiO manage to shoehorn into the Mil Pro is remarkable.

But before the technology, let’s cover the audio. As a high resolution digital audio player (DAP) it can handle all the many digital file types, but there’s quite a lot of emphasis on DSD, or Direct Stream Digital. No doubt that DSD sounds good and is rightly popular with the cognoscenti, but it remains a minority interest. With high data rates and big file sizes it is technologically challenging too; the Mil Pro has been purposed to handle the issues. It has 64GB onboard memory but can read a micro 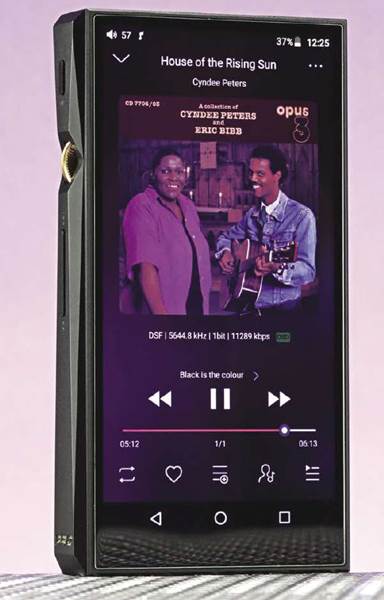 SD card – there is one card slot – up to 2TB. DSD files are large, my test files coming in at 0.3GB (300MB) or so, meaning 200 would fill the internal memory so that external card is essential.

But feet on ground. Most of us will use CD files, perhaps rips of CDs we own, at around 65MB, or even scuzzy old MP3s from yesteryear that are flea sized and can inhabit this player’s internal memory in their thousands. Just to get the Mil Pro into context music file wise.

Playing the music files are two AK4497EQ digital-to-analogue convertors (DACs), one per channel, from Asahi Kasei Microdevices of Japan whom, I suspect, are pedalling hard to challenge EES of California. Their Velvet Sound DACs sound good to me in other products so I expected much here.

And then to the outputs. What headphones can you connect and will it drive a hi-fi system? DAPs have got into a knicker-twist with headphone outputs, trying to squeeze best sound through worst connector – the 2.5mm four pole jack. Impractically small and weak, it’s difficult to wire, breaks easily and is unsuited to real- life use on the move. The Mil Pro carries a sturdier 4.4mm four-pole alternative for balanced audio output, retaining 2.5mm balanced and 3.5mm unbalanced three-pole – the one most people use.

The Mil Pro can be connected to the balanced or unbalanced analogue inputs of a hi-fi system like a CD player, to act as a hi-res digital player, running from internal battery or external USB power (5V). It has an analogue Line output for this, and electrical S/PDIF digital output.

There’s also Bluetooth wireless transmission, with LDAC, aptX and aptX-HD, and SBC protocols, to send music to a hi-fi, and Bluetooth reception so the player can act as wireless headphone amplifier.

The USB output will charge, 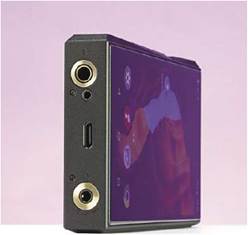 The bottom face has a sturdy 4.4mm balanced output (top), and beside it a tiny 2.5mm balanced output. At bottom a 3.5mm headphone socket also acts as a Line output (fixed volume) and a digital S/PDIF output using a supplied adaptor.

transfer files or photos, or connect as a DAC/headphone amp to receive a stream from a computer, but it was not seen as an input by my Mac or PC, which surprised me; I could not stream out to them. 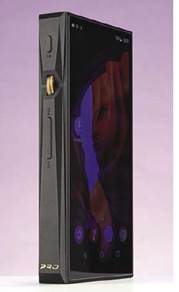 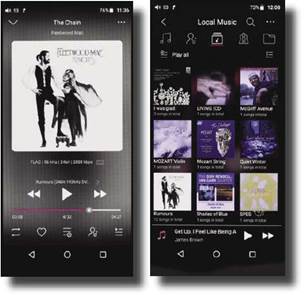 Battery life is quoted as 10.5 hours, the exact figure depending upon screen usage and file size played. Build quality is superb: MII Pro is massively strong.

At left is a neat little rotary volume control, track skip buttons and Play/Pause button, but all controls are available on the screen of course, from FiiO’s music app

The single card slot uses a card carrier, rather than a push-n-click open slot. It’s secure and dust proof, but needs a small tool seen here (supplied) to activate. A paper clip will do.

running on an Android 7 operating system. Other apps can be loaded and the internet accessed via wi-fi for music streaming, including MQA files from Tidal Masters. You get a Google Chrome web browser too.

FiiO’s music app was clear and text easily legible on the bright, high resolution screen. As is common with complex players like this there are two Settings (gear wheel) menus, one in the basic OS, the other in the app. and on the Mll Pro both are crammed with options, including DoP over S/PDIF which I thought was impossible because of low data rate in this 1980s technology.

In the basic OS there are six low pass filter options, low and high output, USB DAC/storage and much else. Irritating was the need to manually update the system when music files were loaded.

The music player app screen options were many and poorly ordered I felt. Highest priority (default) was Last Played – useful only if you want to play recent tracks repeatedly. Another touch-selection in a top menu is needed to access the usual track, artist, album and folder listings, of which the last is what I use, with its individual tracks and folders of tracks, but this demands yet another selection to choose the storage used. I prefer to see this listing as a priority, as in many players, not way down the menu stack, available only after repeated selections.

There is a Back button but no Forward button to move through these menus. Having found a track and pressed play it takes another selection to raise the Play screen with track info, but this is not available in the default Recently Played menu. It takes another four selections to raise this screen – laborious. I found the app’s user interface hard work, more so than FiiO’s simpler players.

The computer interface uses a symmetrical USB C socket and USB2 protocol, invoking the usual Android loader on my Mac but linking straight into Windows 10 on my PC, as usual.

Sound quality of the M11 Pro was on the warm and full bodied side, with powerful bass. I selected the ‘Short Delay Fast Roll Off’ filter to get energy into high treble. Think: a powerful but easy going sound.

This was in itself not untypical of the AK4497EQ Velvet Sound DAC, that mimics the ESS Sabre 32 Series DACs.

With a wide variety of review tracks I know well and use consistently the M11 Pro sounded strong and forthright. The pounding synth drums of Safri Duo’s Samb-Adagio had both strength and pace, if not quite the grip of Audiolab’s mains powered M-DAC+ that I used as a reference, hooked up to the Mil’s S/PDIF output – but that is to be expected.

Sinead O’Connor singing Foggy Dew had The Chieftains behind her sounding large, bodhrans having good slam, pipes and whistles shrill and vigorous. I fancy the Mil Pro is a tad stronger at the bottom end than many players in my recall, getting close to M-DAC+ – which is good going.

Not being a great fan of headphones for ultimate listening, I connected the balanced output into the McIntosh MA352 amplifier I review this month and compared CD rips on the Mil with the original CDs spun by an Oppo BDP-205 player also connected up through balanced cables – and they were reasonably close (through Martin Logan ESL-X electrostatic loudspeakers). There was some slight loss of definition and grip from the Mil Pro running from battery but it still thundered when necessary – yet could capture delicacies in Dadawa singing Canton Story.

I played a full range of music files types, including massive DSDs like Cyndee Peters singing House of the Rising Sun (DSDl28) that consumes a breathtaking 0.5GB; no MP3 flea here but a DSD elephant – and it sounded as liquidly smooth as DSD does, which is why the Mil Pro focusses on this file type. Send it out through balanced analogue outputs of the Mil Pro and you have one amazing sound source.

FiiO have even addressed the difficulty of using a portable as a stand-alone player by developing an app for control from the ‘phone: remote control in effect so you don’t have to jump up and down to select tracks – as I currently do when using our Astell&Kern AK120 as a digital file source.

A player like the Mil Pro is a tech tour-de-force and takes some understanding. The breadth of options makes it quite heavy going and the user interface menus were not to my liking in sequential arrangement; 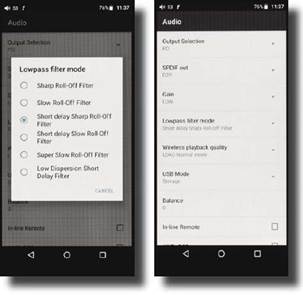 At left is the filter menu with six options. They affect CD file playback most, Super Slow Roll Off giving a warm sound. At right is the Audio Settings menu in the app.

lots of unnecessary button stabbing. But the screen is superbly clear and bright, easy to visually comprehend and enjoyable.

Sound quality wise there is little to say here other than you get superb quality from all outputs. FiiO have strong technological grip: all their claims were fully supported by measurement – and by listening. Making the Mil Pro a remarkable tech fest at a price that is almost absurdly low.

Via the 3.5mm headphone output, frequency response with 192kHz sample rate PCM rolled down above 64kHz (-1dB) to the upper theoretical limit of 96kHz (as shown). The six filters affect 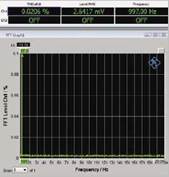 hi-res little, but with CD the Slow filter rolled down output above 15kHz and Super Slow above 8kHz, the latter being audibly obvious as warmer sound.

The balanced output delivered a massive 5V; Line Out 2V the same as a CD player. Both gave same low distortion and high dynamic range as headphone output.

Output from the 3.5mm stereo headphone jack (unbalanced) was 1.3V (Gain at Low) and 2.6V (Gain at High), both more than enough for shattering volume from headphones. High is for insensitive designs.

Measured performance was superb in all areas. The M11 Pro has no weak points.

Challenging in its complexity - not for the faint hearted but worth hearing, especially with DSD.

1 new from $949.00
in stock
Check Price
Amazon.com
Last Amazon price update was: January 16, 2022 11:38 pm
× Product prices and availability are accurate as of the date/time indicated and are subject to change. Any price and availability information displayed on Amazon.com (Amazon.in, Amazon.co.uk, Amazon.de, etc) at the time of purchase will apply to the purchase of this product.