This is not a Rega cartridge as I know them; I was taken aback. The Rega sound is dis­tinctively mild – but not so here. This cartridge is a small change of tack, to use a nautical term. Not so big as to threaten the boat: “a course correc­tion” so as to say. 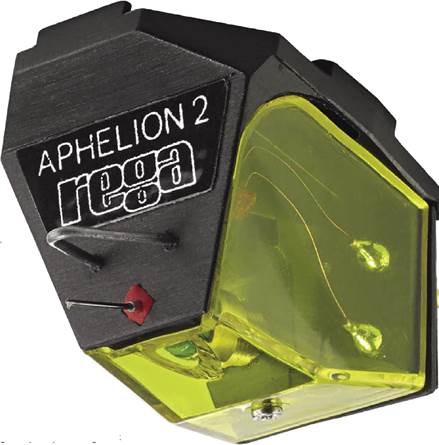 I’ll get straight to the point: the Aphelion 2 doesn’t display the Rega sound as I know it – or have known it. Which is a bit of a surprise because Aphelion 2 has plenty of competition in this price band and needs a unique selling point, but I found it similar in balance to others. It is less expensive than our reference Ortofon A95 but a tad more expensive than Cadenza Black both technically similar to Aphelion 2 in the use of a boron rod cantilever.

However, there is a wild card in all this: Rega’s three-point fixing arm, to which the Aphelion 2 is ideally suited of course (unlike rivals). If you already have a Rega arm or are thinking of getting one then Aphelion 2 awaits, assuming you are willing to spend so much on a pickup cartridge.

I have always been a Rega arm man since owning and using an RB300 – and remain so after reviewing their Planar 10 turntable (March 20 issue). Use in a Rega arm is a strong pull toward Aphelion 2.

What is Aphelion 2? It is Rega’s own in-house designed and assembled high flyer that comes with a light, stiff and strong boron rod cantilever fitted with a Line contact diamond stylus. This is right on current technological trend, boron cantilevers coming from an outside global supplier (who I have yet to identify) that I suspect supplies all cartridge manufacturers, since manufacturing such a specialised miniature part is all but a weird thing to do. But the point is these cantilevers are popular with manufacturers, they have significant strengths and Aphelion 2 uses one. I regularly hear one in the Audio Technica OC9X SH I use frequently for review purposes.

The light weight of boron helps keep tip mass in check which in turn improves high frequency tracking. That said, top level torture tracks induced slight mis-tracking with Aphelion 2 (see Measured Performance), where others clear them. But to put this into perspective, these test tracks are above what you’ll find on any commercial LP especially nowadays as modern cutting lathes are held in check by sophisticated electronics to avoid such modulation levels.

Boron then helps Aphelion 2 track well in the mid-band and at high frequencies, bringing a sense of steady confidence to high level vocals with sibilance in particular.

Whether a boron rod cantilever is strong enough not to bend or snap I do not know! Luckily I have not had that experience in all the many cartridges I have reviewed. Guess there’s a limit somewhere but likely a boron rod will be more durable than an aluminium tube.

The Aphelion 2 body is machined from aluminium and as our pictures show there are three threaded fixing holes. Two are set half an inch (12.7mm) apart as usual, allowing the cartridge to fit any arm, the third can be used only with Rega arms that have three-point fixing. The idea here is not just to clamp the cartridge more securely, but also to make rigid the whole headshell assembly, reducing

the vibration headshells exhibit, so

Rega supply three short hex head bolts and – unusually – a small torque wrench to tighten them, possibly to avoid the alloy threads being stripped by those who over-tighten.

Weighing just 6gms, this is a very low mass cartridge – at the limit of what most arms can balance out. Most should just manage it.

Rega do not supply accessories such as tracking force gauge, stylus brush or a range of screws. Screws supplied are short M2.5s suitable only for their own arm; custom headshells that come thicker – especially when made of hardwood – will need longer screws.

It did not take long when listening to Hugh Masekela’s Uptownship, on Hope (180gm), for my listening notes to remark on speed of hand drums and general rigid clarity, with fine bass definition. As the hand drums kept going I could detect this cartridge has a boron cantilever. There was a hard edge to each transient and a 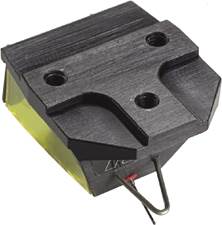 slightly mechanical sound. When I told Ortofon I preferred the tapered aluminium cantilever of Cadenza

Bronze to the boron rod of A95 they 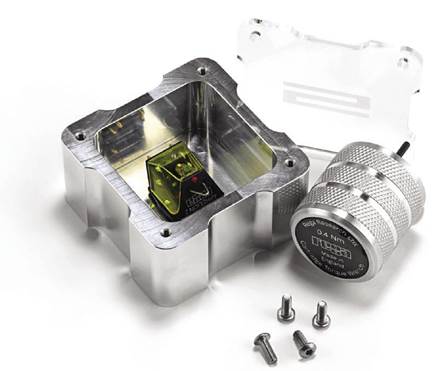 Aphelion 2 comes in a sturdy machined alloy case, complete with torque wrench to ensure the attachment screws are tightened by the correct amount.

A95 and OC9X SH. Being an engineer I should enjoy this sense of precision – but a bit of romance in the sound always helps methinks.

In the case of Aphelion 2, that runs flat to 20kHz and peaks a little, there was vast insight and detail, with a smidgeon of treble brightness on outer grooves. Bear in mind here our cartridge was new. As a stylus wears chuckled and said I liked a ‘romantic sound”. Boron is preferred by manufacturers.

So there you are: forget romance here, we are talking about cutting edge speed in the sound, or put another way excellent time domain definition. However, materials have signature resonant properties that are easily identified by the ear and the hand drums had not only hard edged transients that I knew came from boron, but there was a coolness in the sound I also know from

“we are talking about cutting edge speed in the sound, or put another way excellent time domain definition”

From Uptownship the striding bass line was firm and solid in our SME309 arm – and doubtless better in a three-point fixing Rega arm since this fixing method improves definition all-round. The Aphelion has an icily clear mid-range that made Masekela’s vocals shine out and cymbals were conspicuous, yet they had a lovely sonorous quality. I was pinned to the seat, blasted backwards! Well, when volume went up. Think speed and dynamics, with a sense of solid, well defined bass that we all like to hear shaking the room.

This is no sonic wimp of a cartridge, yet it is well controlled in its behaviour. There is no warmth; it is brutally honest about what is in the groove: technically correct. Forget about the easy tone of yesteryear.

Introducing yesteryear! I’d noticed ticks and pops came out like rifle shots, as they do from modern MCs, so wondered how a cartridge like 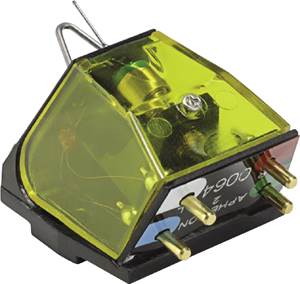 Colour coded rear connection pins are unobstructed by bodywork, making for ease of connection. The generator assembly can be seen inside.

this would play old records. On went All Your Love, from Blues Breakers (Decca, 1966) and no problem; I just heard all the restrictions of a recording of that time: pinched and coarse midrange mainly. Clapton’s guitar work was vivid and John Mayall’s distant vocals discernible.

Noise was more evident in a heavily played track, Out of Reach, from World of Blues Power (Decca, 1969) where the gloriously atmospheric vocals of Peter Green and his beautiful guitar work – second after Hendrix in my view – came over clearly, regular groove noise from heavy playing not being made intrusive. RIP Peter Green. 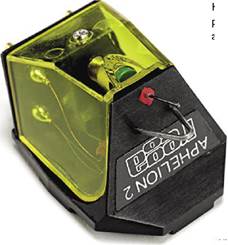 The body is compact in shape and light in weight – just 6gms.

Bringing me naturally to classical on LP where noise is a major point of complaint. Spinning the lovely 2L (Norway) LP of Marianne Thorsen playing Mozart violin concertos I was taken more by insight into the Trondheim Soloists behind her than ticks or pops. Opening lower strings sounded fruity on track one and when Marianne Thorsen’s violin suddenly entered proceedings it was startlingly clear and forward. A tad cool perhaps, but vivid.

The term “cool” that I kept writing in my notes became more defined with Mark Knopfler’s True Love Will Never Fade, from Kill to Get Crimson (180gm). This is a full bodied recording Aphelion 2 cooled by removing its sense of warmth (OK, a logical inevitability!). I got to hear Knopfler’s fluid fingers, strummed and plucked strings ringing out sharply and clearly; you get to hear it all with Aphelion 2.

On to the subject of inner grooves. Playing Time to Say Goodbye, from Two Countries One Heart (180gm), a fine audiophile recording from Hi-Fi Direct of Italy, Rosella Caporale’s sustained crescendo, almost in the run-out groove, was piercingly clear and stable; no sign of mistracking and good insight too.

Of course, I had to spin The Big Band Sound, from the Syd Lawrence Orchestra – an extraordinary recording – and Sing Sing Sing showed

The boron rod cantilever carries a line contact stylus. Above is a guard. From above it can be seen clearly when cueing.

just how fast and controlled Aphelion 2 is. Trumpets were vivid and with hard edge, the brass section generally dominating. The glorious drum solos were solid and clear too, but I wished for a bit less top-end emphasis to better hear this drum work.

With its machined aluminium body and three-point fixing Aphelion 2 should be used in a Rega arm with three-point fixing head shell, to heighten the intentional drama within its design. It is fast, hard of tonality but desperately insightful, firing music out like precision bullets. Certainly a cartridge to be auditioned, it is cooly capable and dramatic in revelation.

Our analysis of the Rega Aphelion 2 (JVC TRS-1007 test disc) shows frequency response runs basically flat from 20Hz to 20kHz. However, there is a +2dB peak in output around 12kHz, enough to give some brightness in high treble. Lack of an upper midband roll­off means there will be a strong sense of insight and detail. The stylus traced inner grooves well, with minimal loss of -1dB in upper treble (red trace), barely noticeable in use.

Tracking of 300Hz test tones on CBS-STR112 test disc was very good, the Aphelion 2 clearing a high 63 muy m lateral track at 2gm down force (recommended) but staring to mistrack at 90 muy m – but it stayed in the groove. At 1kHz (B&K2010) where acceleration is higher and tip mass more influential a high 20cms/sec band was cleared but the highest 25cms/sec track caused mistracking, but again the tip stayed in the groove. Some cartridges clear these top bands more confidently but the Aphelion 2 is unlikely to mistrack in use.

Distortion measured a respectable 1.3% on lateral modulation against a typical figure of 1%, so close. On vertical modulation the figure was a low-ish 2.6% due to a measured vertical tracking angle of 25 degrees (DIN 45-452 test disc). Optimal is 22 degrees and the Aphelion 2 got very close, making it a low distortion cartridge in overall terms.

The Aphelion 2 measured well all round, except for low output. Frequency response suggests strong midband information retrieval and some high end brightness. 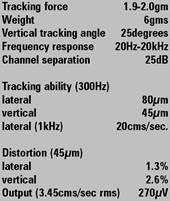