SANT’AGATA POWERS ITS BABY BULL TO 470kW COURTESY OF THE PERFORMANTE POWERPLANT, BUT ALSO PROMISES A CHASSIS TO MATCH WITH NEW ALL-WHEEL STEERING. Read our LAMBORGHINI HURACAN EVO Review.

His HAPPENS OFTEN in car company land. A whiz-bang new halo model emerges and then, what feels like only a year later, the base model is facelifted and gets all the goodies of the previous halo car, which now seems a bit dated. Coincidence? More like cleverness – car companies know what they’re doing.

Case in point: the new Lamborghini Huracan Evo. More than the Huracan’s biggest update since its launch in 2014, the Evo is a Performante in everything but name – and one other major exception which we’ll get to. That means it’s in with the Performante engine, the most aggressive iteration of the Lamborghini/Audi 5.2-litre V10 yet. A redesigned inlet tract and higher-lift intake cams with titanium valves – and presumably some ECU fiddling – combines with the existing 12.7:1 compression ratio and 8500rpm maximum engine speed lor a fairly staggering 470kW at 8000rpm and 600Nm at m, up 21kW/40Nm on the outgoing LP610-4. The seven-speed dual-clutch paddleshift transmission remains though in fairness it had little room for improvement, while the big news in the chassis department is the fitment of the Performante’s trick rear-steering system. Lamborghini, meanwhile, has ditched the previous letters/numbers naming convention – to make the cars more marketable, it says – so you and I would be the only ones calling it the new LP640-4.

That, of course, was the Performante’s name under the previous naming convention, yet the Evo differs in one significant way and it’s not just the lack of super-sticky Pirelli P-Zero Trofeo R tyres – no, don’t think your Evo is going to set a 6:52.01 around the Nordschleife, unless you retrofit the Performante’s Aerodinamica Lamborghini Attiva (ALA) active aerodynamics, of which the Evo misses out entirely.

The aero has indeed improved, says Lamborghini, thanks to restyled front and rear bars – which inject a bit more sin into the Huracan’s overall vibe – and a subtle yet obvious, almost ducktail-like rear lip spoiler. In Evo guise, and certainly in our test car’s Bianco Icarus Metallic paint, there’s a new – to our eyes – almost Countachness about the Huracan missing in the previous design. And that’s even if you ignore the awful body-coloured, white rear diffusor – one aero element that does borrow heavily from the Performante – which looks, from some unfortunate angles, like a nappy.

Inside the tweaks are minimal, limited to a new 8.2-inch touchscreen atop the centre stack which now contains all infotainment and air-con controls. As we pick the car up, we’re told, almost proudly, that this system was designed by Lamborghini – not Audi – which would go some way to explaining why it’s fiddly, not the last word on intuitiveness and a bit annoying.

Meanwhile, not that it would register for those in the market but the price has crept up from $428,000 to $459,000, or a seriously pricey $520,461 if you tick as many options as the Lamborghini public relations team did for this particular car. Which had just 146km on the odo when we picked it up, making MOTOR the first outlet in Australia to drive it, and with just a 500km limit. Needless to say, the run-in period was very brief.

And limited, mostly, to Melbourne’s Monash Freeway as we guided the pristine nose of our baby bull south-east towards Warrugal – and the twisty road playground that lies nearby. Specifically, Grand Ridge Road, a 25km stretch of quiet, undulating twisties linking the even quieter locales of Hallston and Ellinbank. The thinking being, faster sweepers should play to traditional Huracan strengths of speed and stability, while some tighter corners could help show off the new rear-wheel steering. Or so the theory went.

The first thing you notice about the Huracan – once you’ve

Thanks in part to cylinder deactivation and stop-start, the big atmo V10 is Euro6 compliant. Impressive! 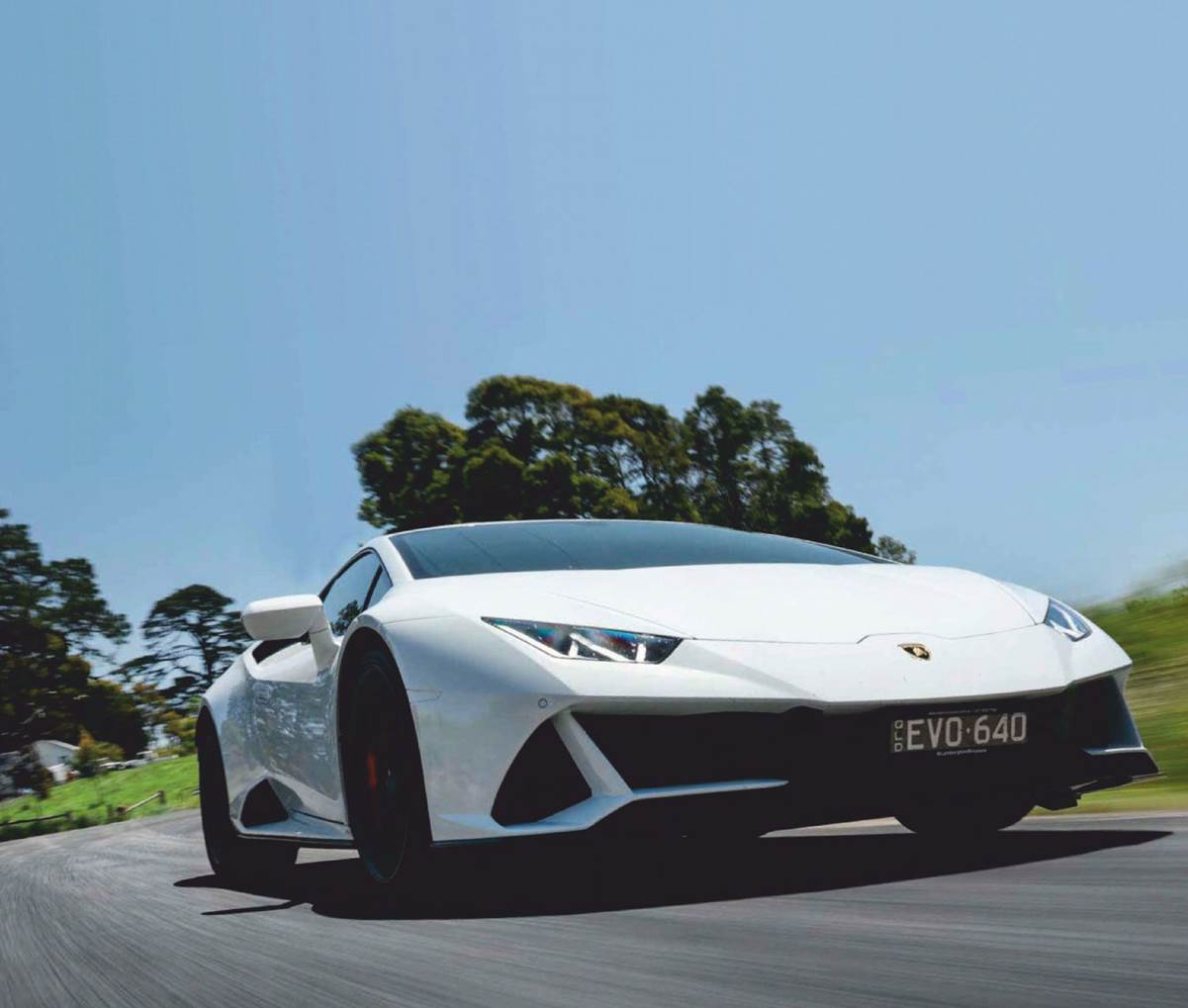 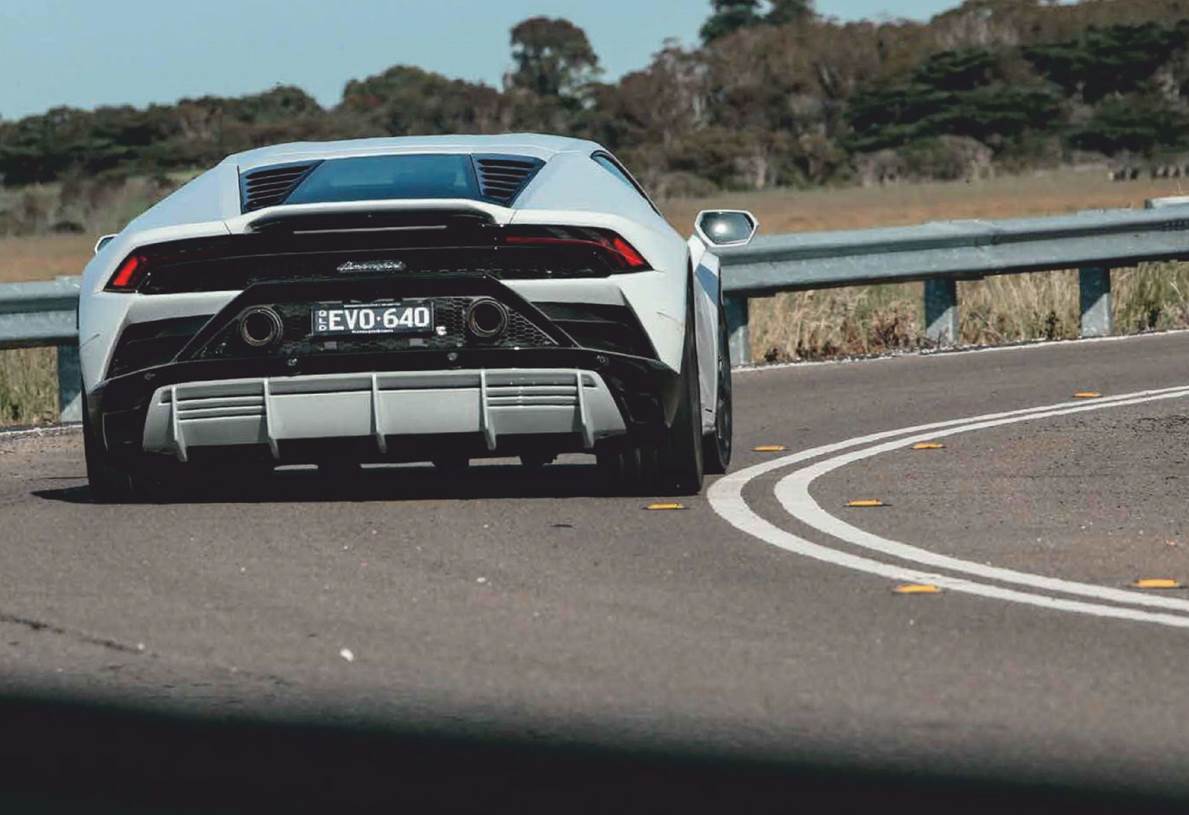 FIRST AND SECOND GEARS ARE PROCESSED RAPIDLY WITH

gottenusedto the curious, slightlyhigh-feelingseatingposition, somewhat of an illusion created by the low windowline and dash – is, as ever, the engine. Oh, the engine.

In the most behaved mode Strada (Street), you’d have no idea of the ferocity that lies just centimetres from the back of your head, the powertrain shifting you along effortlessly, smoothly and quietly and on supple adaptive dampers with a more-than-acceptable ride quality. The width and value of the car are always in the back of your mind and aside from also some fairly big tyre noise – and seats that have a bit of a time limit – the Huracan is as liveable and daily driveable as supercars come. The indicators even make sense after a while, being a stubbly thumb-controlled left-right switch on the left steering wheel spoke, even if the idea isn’t quite as well executed as Ferrari’s, which puts a button on each side of the steering wheel.

Scroll the drive mode selector – which is a red toggle on the base of the steering wheel – through to Sport and even Corsa (Race) and the Huracan may as well be a different car. Ahead of you, the clear, bright TFT instruments transform from big 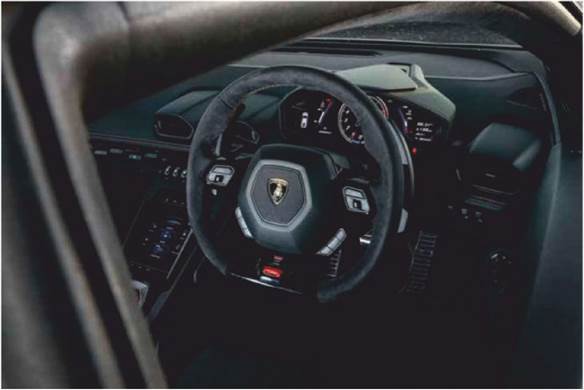 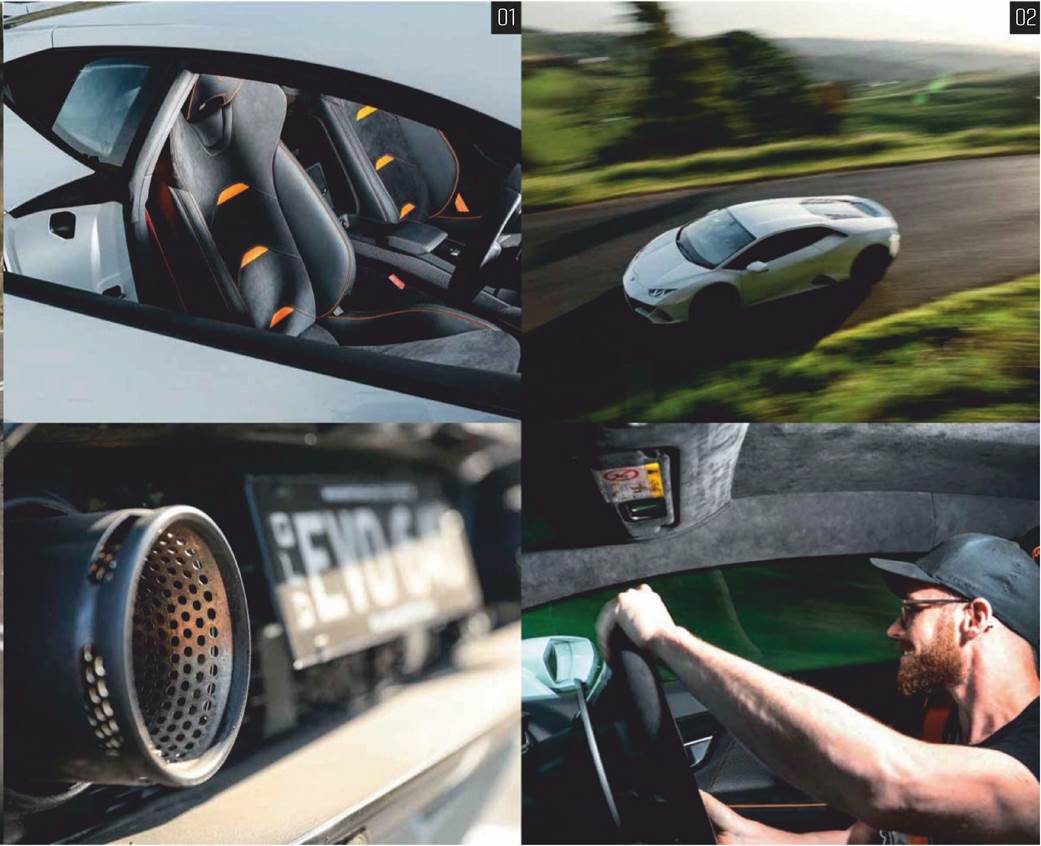 Seats look cool and are supportive but a little firm; will have you squirming after a long stint

Rear-wheel steering has made the biggest difference to the way the Huracan drives. It’s very noticeable

tachometer to full, race-spec rev counter, complete with giant gear indicator. The idle speed increases, as does the amount of decibels coming from behind you, as the Evo crouches down into the pounce position ready for your next command.

If you’re in a supercar posse you might have a silly mate with a McLaren who’s only too eager to tell you just how fast his carbon-tubbed, latest twin-turbo purchase is in a straight line. And he’d be right, they’re fast. So are Ferrari 488s; and 911 GT2 RSs. But the Huracan Evo proves the atmo engine ain’t getting left in anyone’s dust, if nothing else just because of its twin- clutch launch control and all-wheel drive.

As you might imagine with a car with 470kW, the Huracan Evo is brutally fast. First and second gears are processed rapidly with zero wheelspin, howling revs and linear power translating to clean acceleration. And all the while making a noise like the sound deadening has been sucked through a hole in the rear firewall. How they can make a car this loud, legal, is amusing, the Evo even more aurally aggressive than the previous Huracan (which was no wallflower). Notably the hilarious pops and cracks on the overrun, which are so loud they are felt percussively through the seat just as much as they are heard with your ears.

Sadly we were unable to test the Evo on our drag strip but past experience with Huracans and R8s – even rear-drive ones – suggests its claims aren’t the stuff of fiction. Zero to 100km/h takes just 2.9 seconds, says Lambo, and 0-200km/h 9.0sec – improvements of 0.3sec and 0.9sec over the outgoing LP610-4 respectively. Owing to the linear way it accrues speed, and with minimal all-wheel drive fuss – rather than the explosive, coming-on-boost, bursting-into-wheelspin rear-drive thrust of its turbocharged rivals – the Huracan Evo is somehow not quite as exciting in a straight line as its rivals, but it’s still as fast as you’ll ever want. And it sounds as good as you’d ever want, the V10 making a racket that will echo through the ages.

The Huracan, and R8, have obviously always been about that engine. About the powertrain, really, as the twin-clutch ’box deserves just as much praise. And if you could try to understand Lamborghini’s focus in updating the Huracan, you might say it’s tried to elevate the chassis and handling to get at least close to the magic of that which lies amidships. 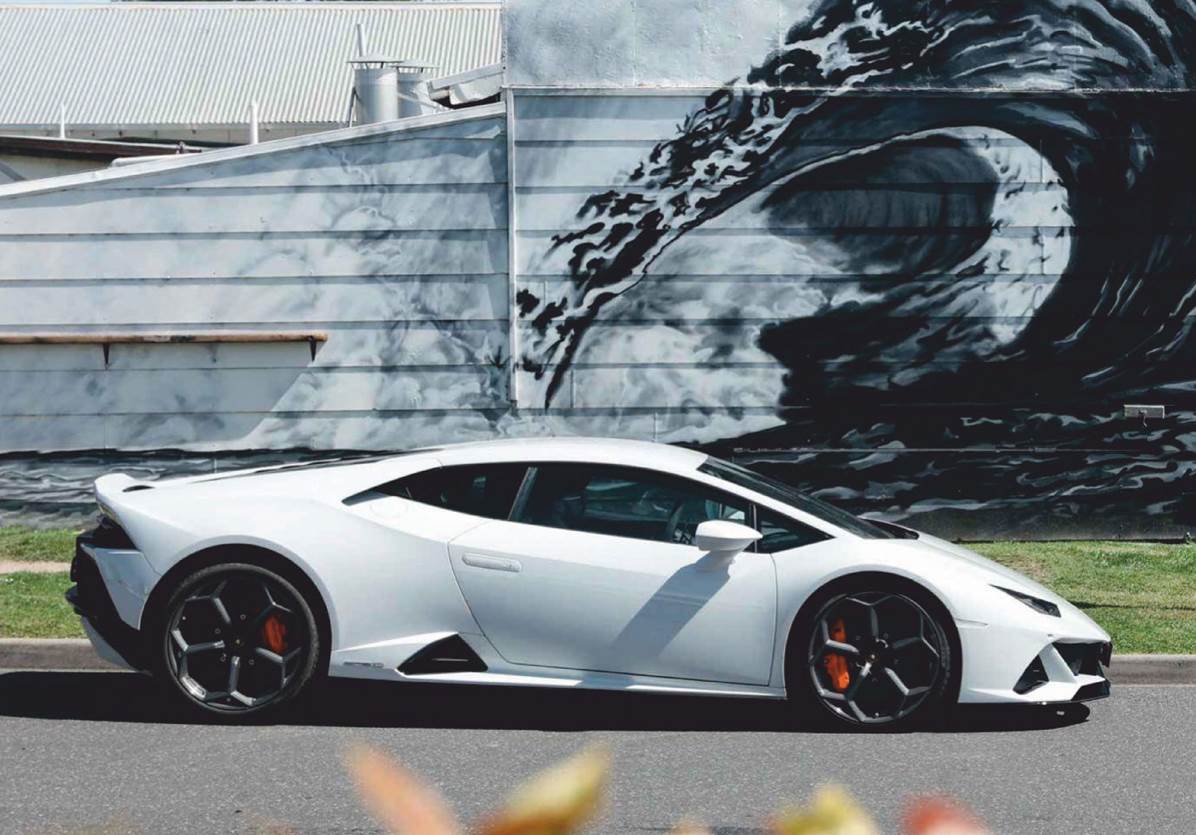 Based on the feeling of driving it, if we had an Evo we’d fit P-Zero Trofeo Rs… for research purposes

The rear-wheel steering goes some way to achieving that. Unlike, say, a Porsche 911 rear-steering system – which blends invisibly into the dynamic sum of the car – the Huracan’s system is very obvious in its operation. Almost too much so. There’s an acclimitasation period as you keep turning too much into corners, only to unwind a little bit of lock. But once you get used to it, only small steering inputs are required – making driving a Huracan fast a tiny bit easier. It comes to the fore in the slower corners where the point of rotation feels more rearward than before, letting you carry more and more speed without fear of the car pushing wide. It’s quite a unique feeling if you’ve never felt it before.

As for the high speed stuff, it’s hard to know what difference the rear-steer has made as it wasn’t exactly a nervous-feeling car at bigger velocities to begin with. Feeling rock-solid planted and giving total confidence at higher speeds has always been a Huracan virtue.

It’s curious playing with the Evo’s myriad electronic modes, too. Corsa is almost too aggressive for the road. The rear- wheel steering becomes hyper-sensitive and the transmission develops an artificial thump as you go up the gears, which is a bit unpleasant. Sport is very much the sweet spot, the transmission a lot smoother, the rear-steering not as aggressive, the damping a bit softer with more compliance. There is no customisable Ego mode in this car – which is a curiosity – so you’re restricted to Sport mode which is no hard thing – it’s perfect for the road.

It has to be said, though, the rear-wheel steering hasn’t

really imbued the Huracan with a new dynamic magic as we may have been quietly hoping. Beyond a doubt the Evo is spectacularly capable – the speeds it will comfortably permit down a twisty road are nothing short of ludicrous – but the chassis, the front end and the steering, still exist in the very long shadow of the powertrain. It’s a fairly hard thing to measure up to – the engine is one of the greatest ever made.

We wouldn’t argue for a second either that the Evo would be riotously good on a track, where what is almost a slightly under-tyred feeling would translate into huge fun. Power oversteer is possible, too, some rear-drive characteristics emerging in first and second gear. But as it stands, on the road, some classic, at times scary mid-engine dynamics (the harder you try to drive around the relatively narrow 245mm front tyres on the brakes, the more aware you are that there is a huge lump of engine right behind you) limit you to driving the Evo in one way. And that’s enjoying the acceleration, noise, gearbox and brakes – of which there is no doubt plenty to enjoy.

Instead, for us the Evo is a preview of a car that’s still to come, and one that makes us salivate like a hungry hound at a butcher’s window: the rear-wheel drive version. The LP580-2, the 426kW version of the previous Huracan, was one of our favourite cars. And so the prospect of an even more grunty, cheaper, Performante-powered rear-drive Huracan Evo is something that Excites Us A Lot. We don’t even know if Lamborghini is going to build one, but we presume they will. And for MOTOR readers, it will be worth the wait.