Born for the rally stage, the Audi quattro and Lancia Delta Integrale led a new genre of performance car whose outrageous pace could be enjoyed whatever the weather. Read our AUDI QUATTRO 10V review.

It’s not always being first that makes the difference, but being the first one to really make a difference. Technically, Audi’s quattro (with a small ‘q’ when applied to the car, rather than the transmission) wasn’t the first fast four-wheel-drive coupe, a fact that’s unlikely to dim the celebrations of its 40th anniversary this year. The Jensen FF, an all-paw evolution of the V8 Interceptor, got there almost 15 years earlier, but sold in tiny numbers and was killed off in 1971. A decade later, though, it was Audi doing the exterminating, using a similar concept to destroy the two-wheel-drive competition in rallying, changing the face of the sport – and the sports car – for ever.

But if it was Audi that got the four-wheel- drive rally car ball rolling, leveraging the technology from its Iltis off-roader to create an epoch-defining loose-surface weapon at the behest of Porsche 917 creator Ferdinand Piech, it was Lancia and the Delta that picked it up and ran with it. The Italians notched up six World Rally Championship manufacturer titles to Audi’s two, and three drivers’ championships to Audi’s two, in the 1980s and early ’90s.

Though definitely cut from similar cloth, quattro and Delta never really crossed swords on the rally stage (see p100). Despite continuous evolution that gave us the short-wheelbase Sport quattro and culminated in the shovel-nose E1, the quattro’s star was fading towards the end of the Group B era. The Audi had been conceived under the old Group 4 rules and was struggling to cope with bespoke Group B supercars such as the Peugeot 205 T16 and Lancia Delta S4, mid-engined machines that shared little more than a name with their road-car cousins.

Sadly, Group B was banned for the 1987 season, partly in response to Henri Toivonen’s 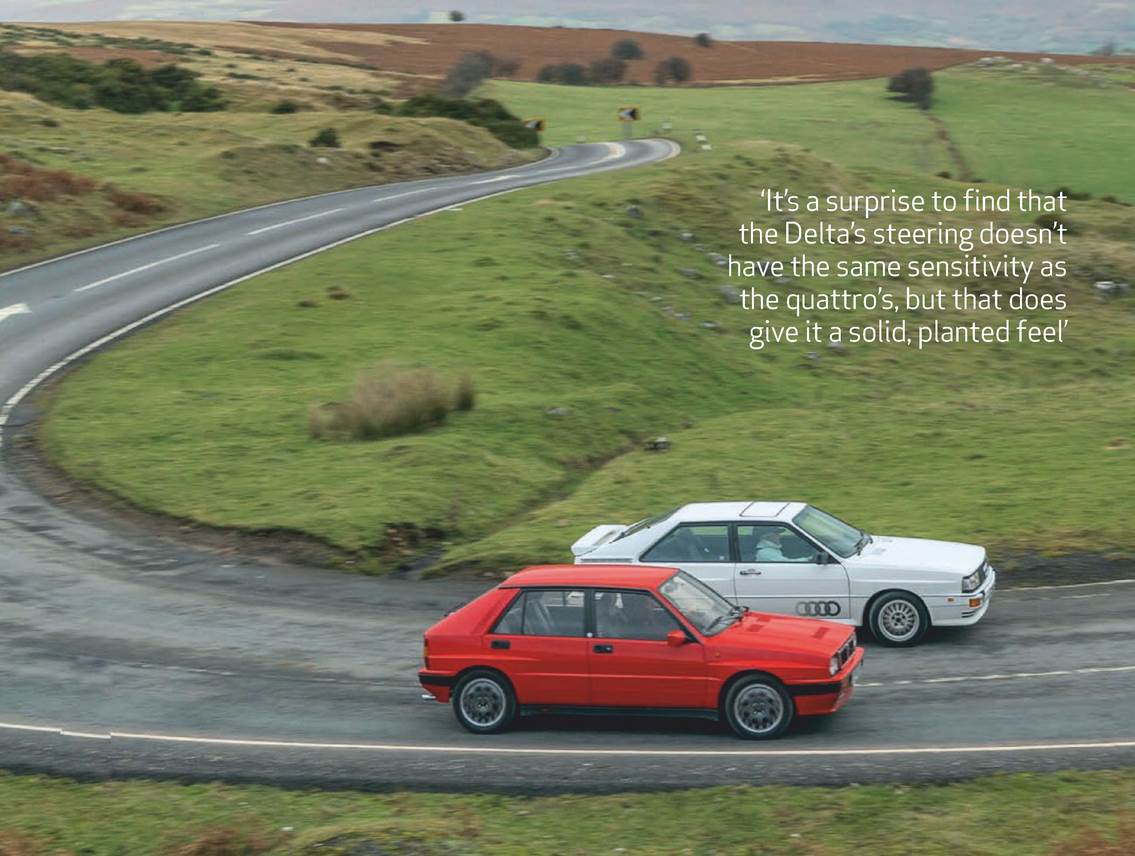 “It’s the sight and sound for me,” says engineer and confirmed quattro nut Darron Edwards. “I remember watching them rallying on ITV’s World of Sport and instantly wanted one. I wouldn’t care if it did 0-60mph in 12 secs, I’d still want one”

In fact, he has four: an early left-hand- drive car that’s about to undergo a major restoration, a black WR, an early Group 4 Rally replica, and this white car. A two- previous-owner WR, it’s all original and has just 64,000 miles on its digital clocks.

“It used to be tricky to get parts” says Edwards, who bought his first quattro in 1992, and now spends much of his time repairing them for other enthusiasts. “Before the internet really took off you were at the mercy of rip-off specialists charging fortunes for parts. Now you can source spares from all over the world”

“I always had a thing for 1980s turbo cars” says Steven Jeffery-Bradley, as he tries to explain why a man who services and repairs Mercedes cars for a living is so smitten by a bright-red Italian rally weapon. “I’ve had Escort and Fiesta RS Turbos, an Uno Turbo, a Renault 5 GT Turbo, and I’d had my eye on this Delta Integrale for a while”

The owner had no intention of selling, but when he passed away in 2015 Jeffery- Bradley stepped in rather than see the rare 8v fall into unsympathetic hands.

Not that it was pristine as bought. “You name it, we’ve had it fixed” says Jeffery- Bradley. “A top-end engine rebuild, plus brakes, suspension, a rear-axle rebuild and a full respray. I wasn’t even sure how much I’d like it when I bought it because I couldn’t drive it. But I’d never sell it now. I don’t think my son would forgive me, anyway”

tragic death in a Delta S4 on the ’86 Tour de Corse. But when the rally world regrouped for ’87 under the new Group A rules, it was Lancia again that was making headlines, this time for all the right reasons and with a car that, in common with those early quattro rally machines, was incredibly close to the regular production car that you could buy from your local dealer.

Three decades on, the roadgoing quattro and Integrale push the same emotional buttons and cost similar money. They’re similarly quick and their permanent four-wheel-drive transmissions give them the ability to tackle any weather conditions. But which makes the best four- wheel-drive, four-season daily classic? We’ve brought two relatively early examples of each together to the Brecon Beacons in Wales, not far from the old RAC Rally route, to find out.

In the red corner is Steven Jeffery-Bradley’s eight-valve Lancia HF Delta Integrale. In the white corner, Darron Edwards’ 10-valve quattro. Both look suitably tough, with their boxy wheelarches stretched to house bigger wheels on the competition cars. But it’s the Delta that nails the stance, its 15in wheels stuffed tight into each corner, leaving no wasteful overhang. The Audi looks a little over-long and under-wheeled in comparison, its proportions hinting at the mechanical layout it inherited from the 1978 80 saloon, which marries a north-south engine and front-wheel drive. What you can’t see is just how far forward beyond the axle line the five- cylinder engine lies, or the clever centre differential bolted to the back of the gearbox featuring two shafts, one turning within the other to deliver drive to all four wheels without the need for a bulky transfer box.

We’ll take the birthday boy first. The ‘Ur’ (German for original) quattros divide into three eras, known as WR, MB and RR. WR carried the 2144cc 10-valve in-line ‘five’, which was superseded by the 2226cc MB for 1988, still making the same 197bhp but fitted with hydraulic valve lifters and more sophisticated fuel injection for cleaner running. In 1989, the final, most desirable RR version arrived, its four-valve head helping lift power to 217bhp.

Edwards’ car is a WR, but by the time it was built in 1986, quattros had swapped the early quad headlights in favour of a pair of modern, 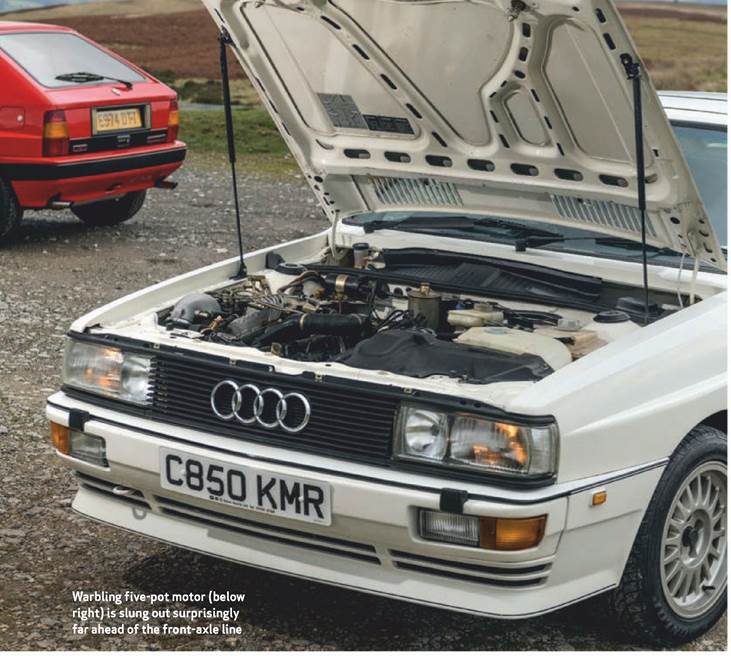 flush-fitting rectangular lamps. The skinny 6x15in Ronal wheels (or optional 7x15in Fuchs) were also binned in favour of an 8in-wide set that are a happier fit in the arches, but cause all kinds of unhappiness when it’s time to shop for new rubber thanks to their unusual 215-section tyres.

But the most important change for British buyers came in late 1982, a year after the UK introduction, when Audi began offering the quattro in right-hand drive.

There’s no doubt the familiarity that comes with sitting on the right of the car helps you hit it off with the quattro from the start. Other aspects, also familiar, are less endearing: some of the switchgear feels better suited to a Yugo than a car costing almost as much as a 911 Carrera when new (not that some Porsche dash bits from this era were anything to write home about).

You sit low, the long bonnet unfolding ahead beyond a surprisingly raked bit of glass. All cars built after ’83 got a digital instrument binnacle; green at first, then orange on later cars. It must have seemed trick at the time, but it’s not nice to look at even if you don’t mind these things: a contemporary Vauxhall Astra GTE’s digital instrument pack is easier to read at a lick.

But the quattro, even this early 10v car, is so much faster than a humble hot hatch. Trickle along with the engine off-boost and the famously warbly five-cylinder soundtrack is strangely muted. Dip into the throttle pedal’s arc and the initial response is impressively sharp, though there’s little in the way of actual energy until the turbo wakes up, whereupon you’re hurled forward to the accompaniment of an induction and exhaust that suddenly find their voice.

With the turbo blowing the WR surges up hills in one long lunge, dispatches dawdling cars without even considering a downchange in the 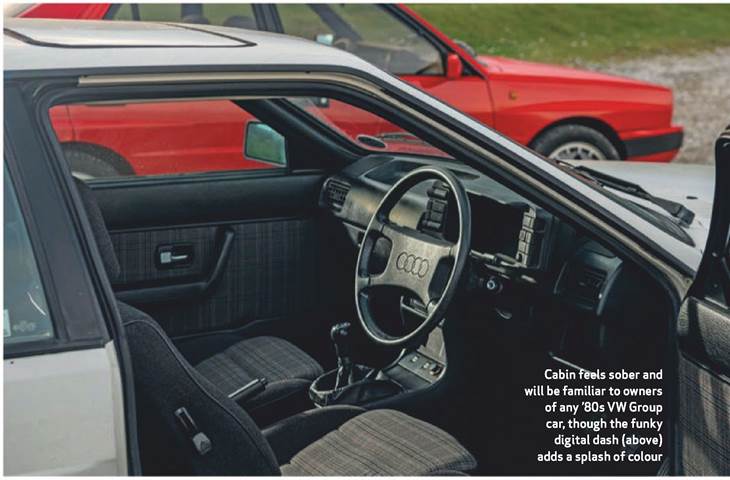