Port-powered’ DAC/ headphone amps, intended to bring the sound quality of smartphones and tablets closer to that of dedicated music players, are nothing new. In recent years we’ve reviewed several of these devices, which may be practical options for listeners intending to travel with as little electronic baggage as possible. Whenever a spot of music is fancied, plug the DAC into your smart-device.

The headphones, in turn, plug into the DAC rather than directly into the device’s own sound system. Note in any case that some smartphones no longer make provision for analogue headphones, their rationale being that the user would be reliant on Bluetooth or transducers that plug into the phone’s USB or Lightning port. The latter have miniature DACs and amps built in. As they – and, for that matter, audiophile-standard mobile 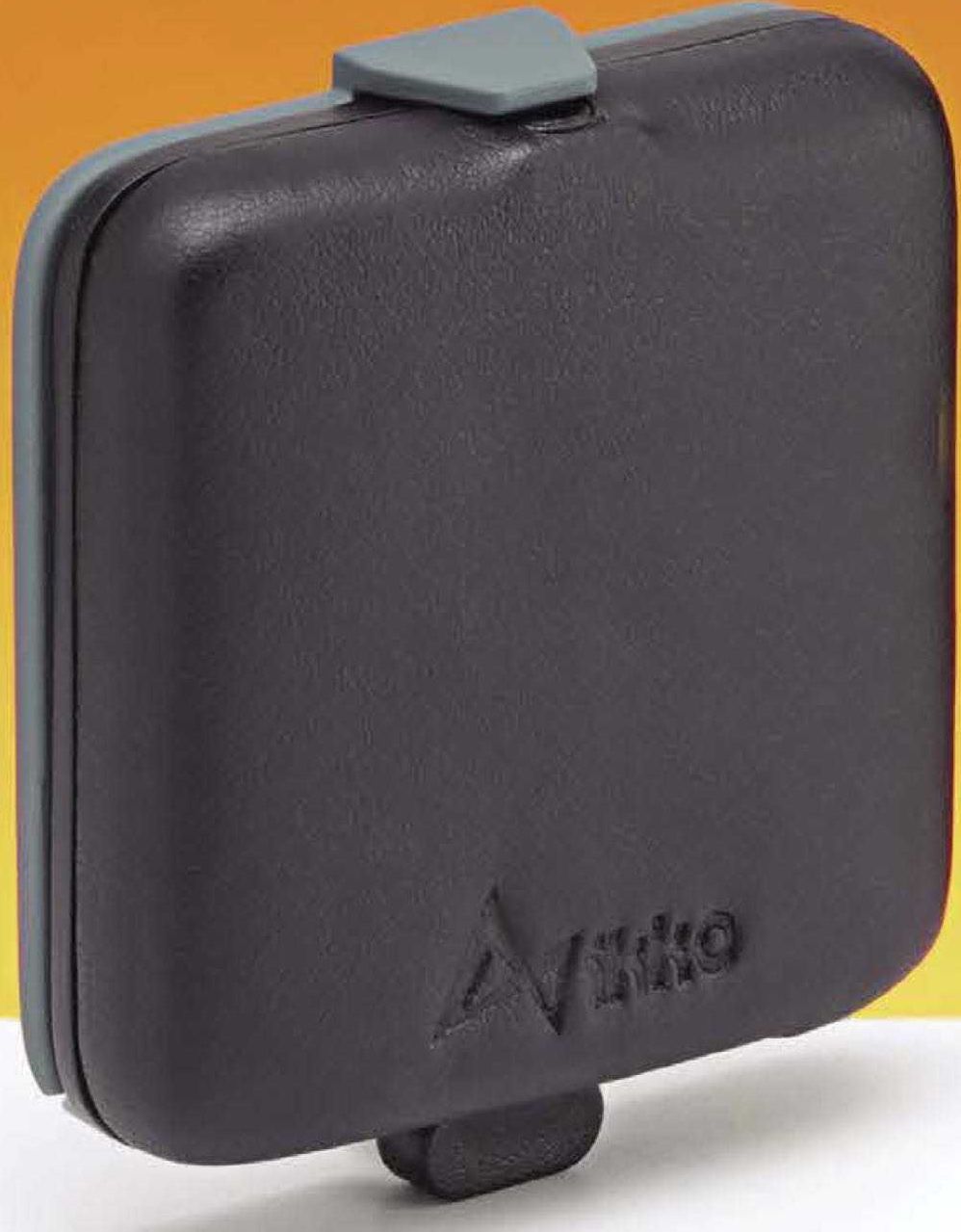 ‘headphone DACs’ – draw power from the host device, they can impact battery life.Those who rely on their phones, but can’t guarantee the availability of a power source for charging, should unplug the DAC whenever it’s not required.

The ITM05 Music Patch, from Chinese manufacturer Ikko, is quite a distinctive take on the headphone DAC concept.A small lozenge that’s fastened to the underside of your smartphone with self-adhesive strips (two sets are supplied), it would be positioned near the base – where you’ll usually find the phone’s charging port.

This mates with a retractable cable stub built into the Music Patch; USB-C (Android) and Lightning (Apple) versions are available, and it’s important to choose the correct one when ordering (each is available in black or white).

You can unplug the ‘stub’ when the Music Patch’s services – and battery drain – aren’t required, but as the 23gm device is semi-permanently attached to your phone it always has to be carted around with you.The case may be padded, but its limpet-like presence can be felt as a ‘pregnant bump’ when carrying it on your person. My advice is to attach the device to a phone case instead; the stub can easily-accommodate it.

When high-quality music isn’t required, simply swap the ‘Patched’ case for one that isn’t. Phone cases are cheap enough, after all.

Usefully, the Music Patch caters for both balanced (2.5mm) and unbalanced (3.5mm) headphones.The 3.5mm socket is positioned at the charger end of the device, meaning that the headphone plug/socket is at risk of damage, if you don’t remember to turn your phone ‘upside-down’ before stowing it in a pocket.The phone’s screen will usually *flip’ automatically to accommodate this; mikes aren’t guaranteed to follow suit – bear this in mind, if calls are expected.

No such problems with the 2.5mm socket, which is positioned at the opposite end of the case. Using balanced phones is therefore the best option in practical terms, as the connector is not only facing upwards but further protected by the body of the phone.

Driving the headphones are amplifiers with some impressive ‘paper’ specs. For the Music Patch, Ikko claims a total harmonic distortion (THD) of 0.0008% and l22dB signal-to-noise ratio. On the other side of the amps lurks a pair of Cirrus CS43198 DAC chips – one per stereo channel. According to importer Advanced MP3 Devices, the Music Patch supports 32/384 PCM and DSD256; whether you get their full potential or not depends on the connected device and playback software.

As your phone’s USB/Lightning port would be permanently-occupied if used to Ikko’s expectations, a ‘replacement’ socket is provided for charging and phone accessories.There’s no volume control on the device itself, the phone’s being used instead.

The Music Patch worked first time with my Google Pixel 3a Android smartphone, a dim LED confirming activity. Music was thereafter diverted to my headphones – I tried Dan Clark Aeon 2 Open and Focal Clear Mg models (both via unbalanced connections) during the review 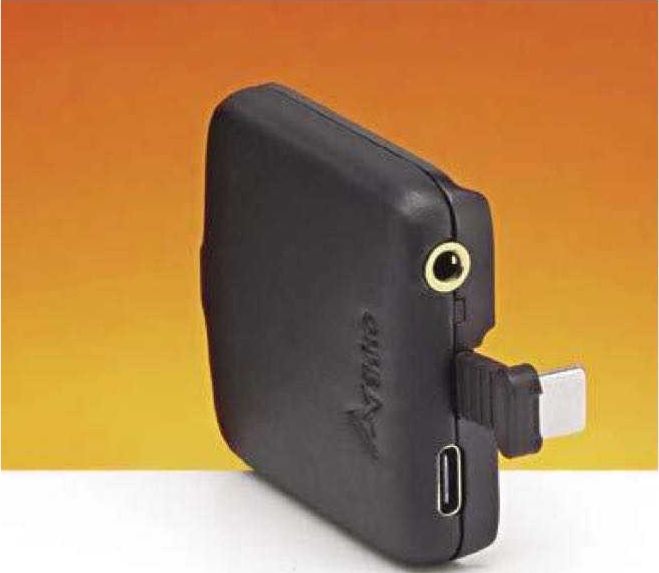 The 3.5mm headphone socket is positioned aiongside the connector stub, at the base end of the Music Patch. Both face downwards and are at risk of damage.

period. Music, in lossless form, was played using the native Google software and VLC. I also found that the Music Patch worked with a Dell Latitude 7290 Windows 10 laptop, no drivers being required.

USE AND SOUND QUALITY

Clarity is a definite strong point, certainly at sensible listening levels; the CS43198 may be a budget DAC, but it’s evidently well-implemented here.The textures of the hard-panned Moog call-and-response in Joni Mitchell’s The Jungle Line were evident, as was the delicate acoustic guitar that strums through Edith and the Kingpin – another track from the exquisite Hissing of Summer Lawns album.

Switching genres, it was easy to make out the structure of a sampled percussion loop lurking in the background of Underworld’s 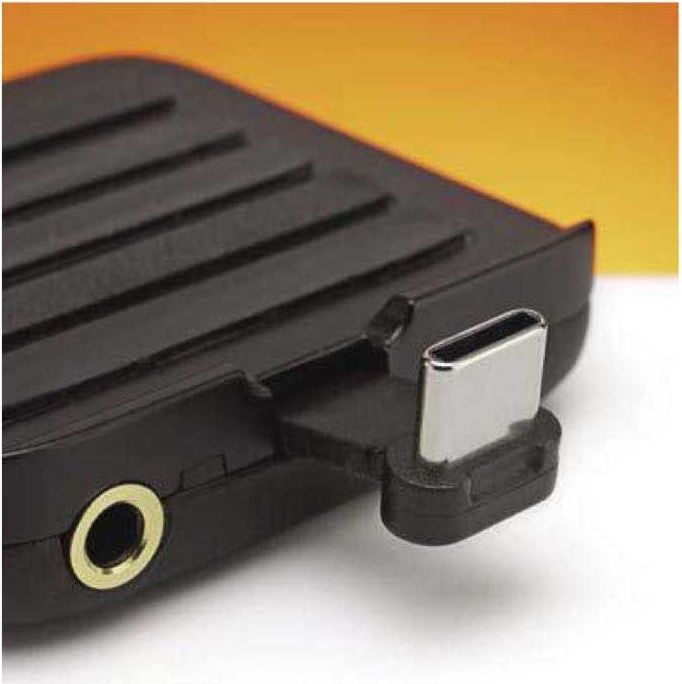 This cable stub mates with the charging/accessory connector at the base of your phone – it can be extended by as much as 10mm to accommodate different case depths.

Jumbo (Beaucoup Fish). I was also taken by the open and wide stereo image that’s imparted to orchestral music – my familiar Noseda/LSO recording of Britten’s War Requiem, for example.Thanks to the Music Patch, I’ve never heard this music sound so convincing via my Pixel 3a, the onboard sound system of which doesn’t – as with most commodity smartphones – meet hi-fi standards.

Unfortunately, strong bass can overwhelm this little device. Listening with the relatively inefficient (94dB/1 mW) Aeon 2 Open ‘phones I found that the lower registers of Black Box Recorder’s distinctively-deadpan Uptown Top Ranking cover and the danceable electronic pop of Calvin Harris’s Bounce both took on an unpleasant muddy complexion if the volume was turned up. It appears that the Music Patch doesn’t have integral DC-DC converters to widen the headphone amp’s voltage swing, presumably to minimise power consumption. The output spec – 2. IV for unbalanced, 2V for balanced – would appear to bear this out (the USB-C or Lightning ports of mobile devices can only supply 5V to connected gadgetry, like the Music Patch).

As the Music Patch has no integral battery (an Ikko selling feature, would you believe?), its reliance on your host device for power has an obvious effect I estimate that the battery life of my Pixel 3a was almost halved, when listening to music at a comfortable level though the Aeon 2s; there’s an improvement if headphones of higher sensitivity (e.g. the IO4dB/lmW Clear Mg) are substituted. Bizarrely, plugging a charge cable into the unit’s ‘loopthrough’ USB-C port switches playback to the phone’s own audio system before charging begins.The unfortunate upshot is that you can’t listen through the Music Patch and charge simultaneously – a bit of a downer, should your device’s battery start flagging halfway through an album.The spec claims that such activity should be possible, and so maybe a quirk of my phone is to blame. 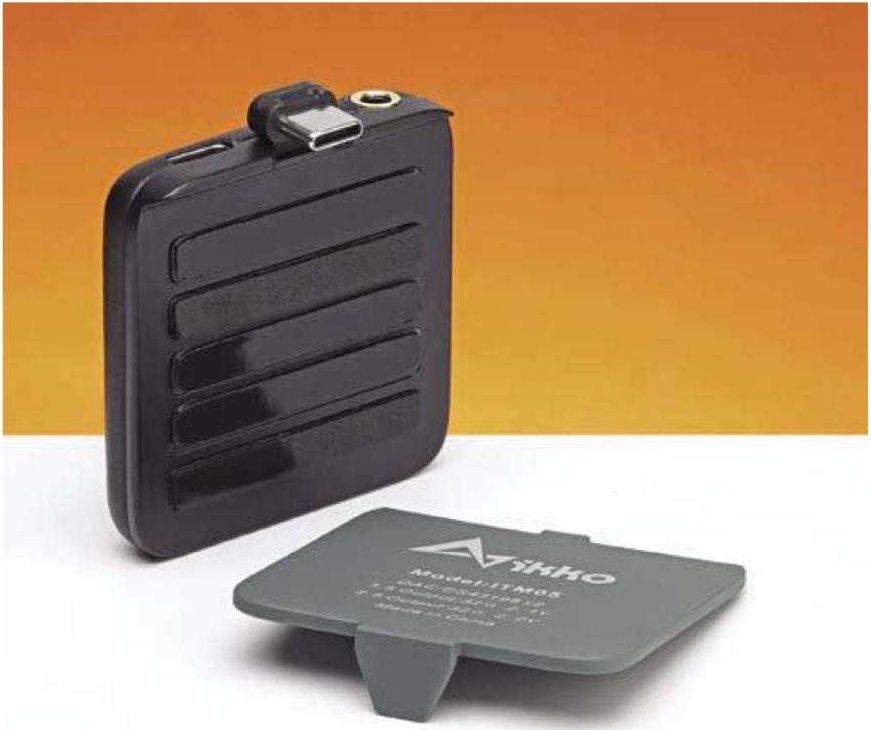 Self-adhesive strips attach the Music Patch to the back of a smartphone; a spare set is supplied. The unit can get warm after long use, but the adhesive isn’t affected.

One has to congratulate Ikko for daring to be different – and, on the whole, succeeding. Most of the Music Patch’s design limitations can be circumvented through careful use. It can sound very good indeed, bringing the mediocre audio performance of the average smartphone up to a far more musical standard. However, the use of efficient headphones or lEMs is recommended. 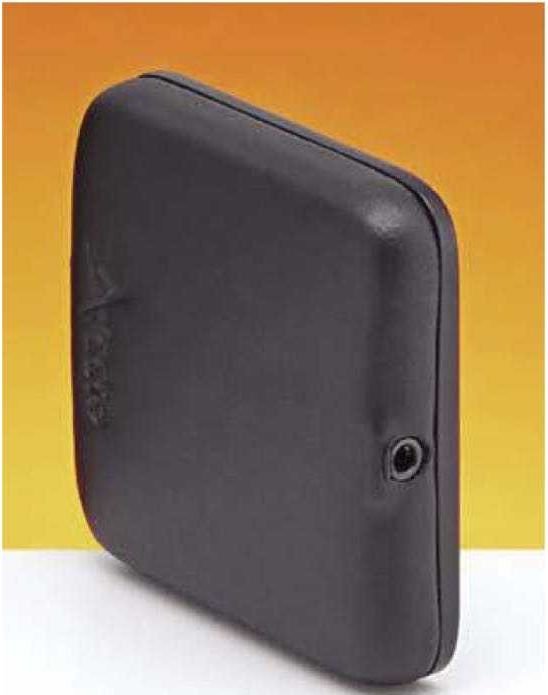 A 2.5mm 4-pole socket is provided for balanced headphones, positioned at the opposite end of the Music Patch to the ‘stub’. It’s protected by the ‘phone body.

A quirky design that's intended to become a semipermanent part of your phone. It can work well, but is not without issues.

£495.00
Added to wishlistRemoved from wishlist 0

$200.00
Added to wishlistRemoved from wishlist 0