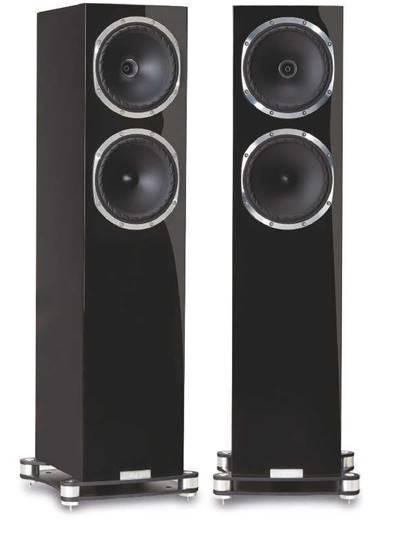 A young loudspeaker company can dream of endless innovation, but it can’t hope to roll out freshly designed new product forever. With proprietary tech, model span and price boundaries established, there comes a point where the potentially open-ended process of evolution begins. For Fyne Audio, the launch in 2020 of the F502SP we’re reviewing here was its very own ‘return to go’ moment.

From a standing start in 2017, the fledgling operation, formed by key personnel from a recently bought-out Tannoy, hit the ground running and extended its portfolio to seven model

lines in under two years – remarkable, and certainly enough ‘all pockets’ breadth to stand comparison with veteran British rivals like B&W, KEF and Monitor Audio.

Echoes of Tannoy were, perhaps, inevitable and nowhere better illustrated than the point-source IsoFlare driver that has been utilised in the F500-series from the beginning. The series designs also showcased an advanced type of downward-firing BassTrax ‘tractrix’ bass reflex port, the name referencing a mathematically derived, cone-shaped diffuser that outputs more evenly than a conventional port and is less fussy about speaker positioning.

SP stands for Special Production and, if you haven’t guessed already, it predictably involves ‘trickle-down’ tech and tweaks. I’ll get back to that. In its fundamentals, the F502 is essentially unchanged. It’s a large but not obtrusively bulky floorstander with what initially appears to be just two drivers. Look closer and you’ll see the 502’s 25mm magnesium dome compression tweeter sits in the throat of the 200mm multi-fibre coned IsoFlare point source driver, joined below by an all but identical 200mm multi-fibre mid/bass driver (sans tweeter). Both main drivers use the FyneFlute variable geometry rubber roll surround to provide a more effective barrier for the cone’s energy, and a cleaner, more precise sound.

The idea behind the SP treatment is to ship much of the next-tier F702’s (HFC 450) sonic talent downstream to the less expensive F502. In essence, this means the SP gets the F702’s rigid multi-fibre drivers, tweeter and advanced crossover as well as its heavily engineered aluminium, split level plinth that works in conjunction with the BassTrax tractrix profile bass diffuser. The drivers and crossover are connected with upgraded silver-

From start to finish the F502SP sounds beautifully open, expressive and lucid

plated Van den Hul wiring while the cabinet panels use denser MDF and are lined with three damping materials to control resonances.

The object of the IsoFlare driver is to get as close as possible to a point source where the mid/bass driver shares a common centre with the tweeter. This should enable superior stereo imaging, especially off axis. The targeted ideal outcome is that sound is produced as if emanating from a single point in space.

The driver’s moving parts are built around a rigid cast aluminium chassis, which is good for damping out unwanted vibration and resonance, while the vented rear chamber in the tweeter’s Neodymium magnet is said to place low-frequency resonance well below the crossover region. Addressing potential distortion higher up the frequency range is the tweeter’s rigid magnesium dome, claimed to push the initial break-up mode well beyond audibility. The tweeter has a wave guide pole piece claimed to deliver an: “incredibly even, full-range frequency response”

and outstanding, pin-point imaging waveguide that has been designed to deliver a flat frequency response.

The BassTrax Tractrix system uses a downward-firing port in conjunction with a cone-shaped diffuser, the aim being to achieve full 360° dispersion of the wavefront and, with it, better room integration and more placement options. This is good news for those with small rooms, as the sound is less influenced by boundary proximity than rivals with rear-firing ports. The SP benefits from the full aluminium sandwich plinth Tractrix profile bass diffuser developed for the premium F1 series re-engineered to precisely tune the F502SP cabinet.

The cabinet is finished in high-gloss black or white as standard, with the option of a deep gloss lacquered walnut veneer. But all F502SPs get a diamond machine-cut finish on their aluminium driver chassis.

Though close-to-wall placement in a small room isn’t out of the question, the F502SP is a substantial tower that prefers some air to breathe properly and so it’s a fair bit of free space and my larger room that get the gig, supporting cast including Pro-Ject’s The Classic Evo turntable (HFC 462), Chord Electronics’ Huei phono stage (HFC 459), Audiolab’s 6000CDT CD transport (HFC 447) Chord Electronics’ Hugo TT2 DAC (HFC 459) and Hegel’s H120 integrated (HFC 460).

I’ve had a number of big-sounding floorstanders in here of late. My resident Falcon Acoustics RAM Studio 30 (HFC 442) – about the same size and price as the F502SP – gets the job done with majestic authority, effortless 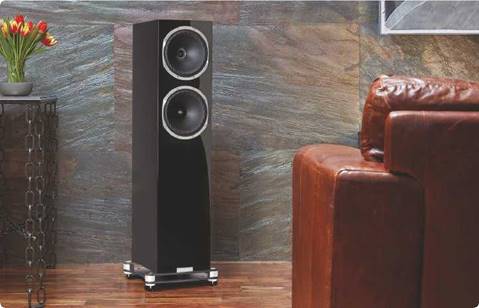 The elegant cabinet is large but unobtrusive 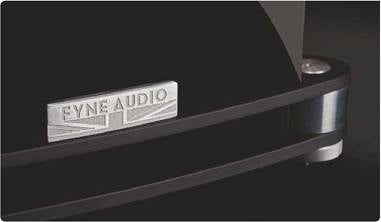 poise and an abundance of couth. Audiovector’s elegant QR-5 brought an airy soundstage, plenty of bass and refined treble extension to the party and Monitor Audio’s more affordable Bronze 500 (both HFC 468) impressed with sheer sonic bang for buck and a canny ability to entertain.

Perhaps the Monitor Audio is the most appropriate warm up act as the F502SP takes that crowd-pleasing energy, ramps up the colour, luxury, clarity, spirit and sense of fun, and runs with it. As I’ve found with more modestly priced Fynes, neutrality isn’t necessarily a guiding principle, whereas distilling the music seems to be a natural gift. The SP is cut from the same cloth, but with the advantages of big-boy bandwidth and resolution, not to mention arguably the most solid and precise imaging I’ve heard in the room – a convincing vindication of the isotropic driver topology, I guess.

Hankering for some ‘cosmic’ funk as only Edgar Winter can deliver, Jasmine Nightdreams’ Sky Train streamed from

Tidal sounds fresh, incisive and dazzlingly clear with oodles of inner detail and solid, well-shaped bass. My favourite Jools Holland collaboration – with Taj Mahal singing Outskirts Of Town – builds superbly to its balls-out climax, TM beseeching any future offspring to all: “Look-look-look like him”. This can often be a little overwhelming for some smaller speakers that struggle to separate out the competing elements and allow enough dynamic headroom for the song to swell. No problem here. From start to finish, the F502SP sounds beautifully open, expressive and lucid with clean, extended upper frequencies that are naturally textured and free from grain, intricately detailed yet gloriously unforced, the Fyne drawing colour, emotion and ‘substance’ out of the slightly grey recording.

Clearly, Fyne Audio continues to go from strength to strength. The F502SP is a tremendously talented floorstander with a huge sound and formidable powers of musical communication. If you’re scratching your head about the big price hike over the regular F502, try to arrange an audition of both. I think you’ll be pleasantly surprised •

Apart from the models already mentioned, there are two price rivals that really should be on your shortlist. Monitor Audio’s Gold 300 (HFC 453) is a little pricier, but like the Fyne is beautifully built and has a muscular sonic presentation capable of musical thrills. Smaller and simpler but no less potent, Spendor’s splendid A7 (HFC 440) has a slightly lighter touch, but is a fast, dynamic and fabulously engaging listen.