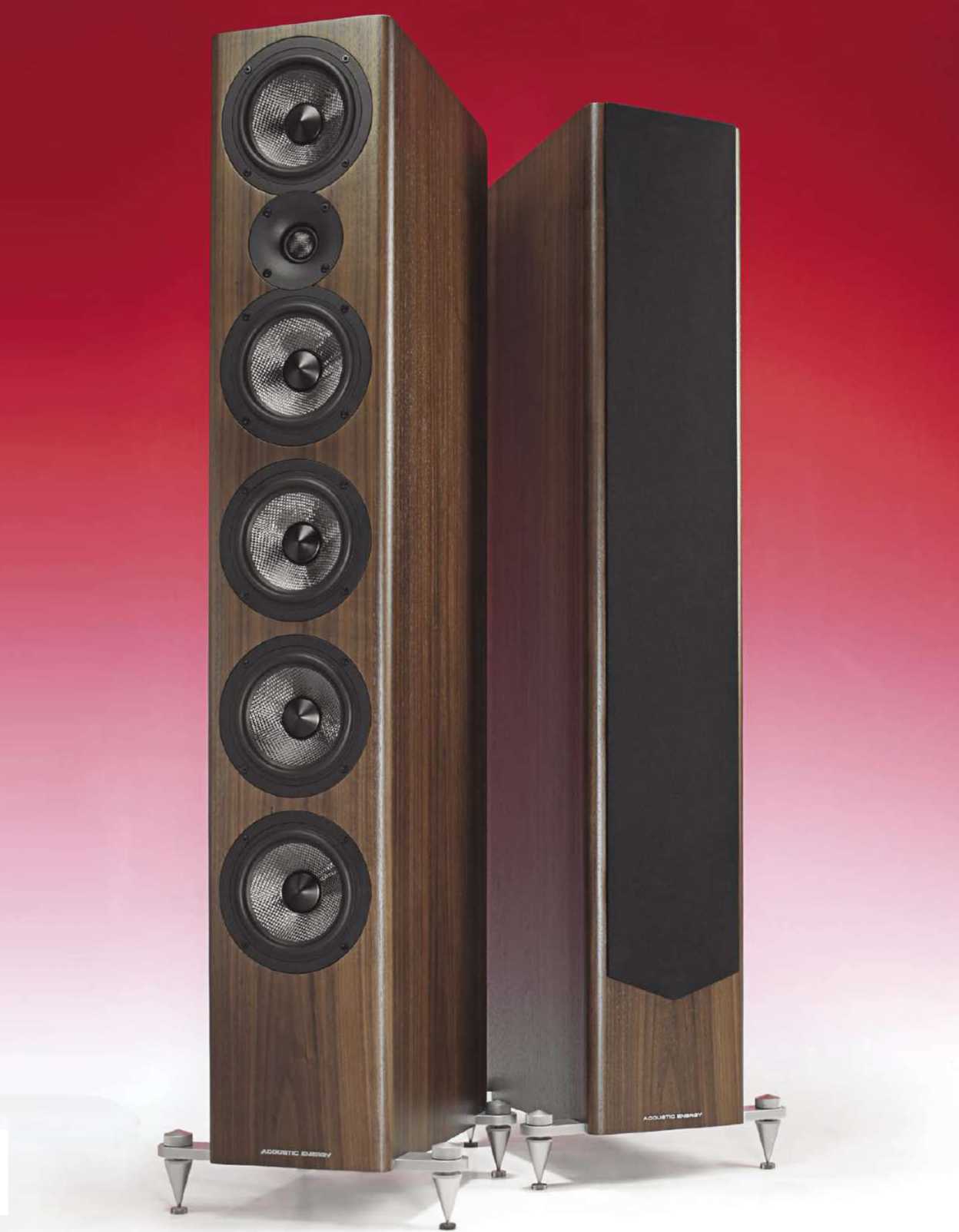 Acoustic Energy don’t get it wrong. What they deliver I have found over the years is a loudspeaker that’s exciting yet accurate – just as founder Phil Jones intended. Not a fiddled contrivance. And that’s how their new top AE520 loudspeaker I’m reviewing here – panned out.

The AE520 is large – and just look at those drive units. An array of carbon fibre cones amounting to six in all. Looks good – but there’s more to it. The large cabinet and multiple bass drivers – the three lower ones – all suggest this range-leader will deliver bass, and it did. They’re all carbon fibre so the sound will be cohesive, not changing character from metal dome to paper for example.

The units above and below the tweeter form what’s termed a D’Appolito arrangement around the tweeter, for smooth vertical dispersion. They work across the mid-band, from 370Hz to 3.5kHz. Leaving three carbon fibre drivers to handle lows and bass below 370Hz, loaded by a large cabinet with rear slot port. Since each cone is claimed to 5in diameter, together they have the cone area of a 9in bass unit – large and able to move air. That’s a snap summary of what is offered in the AE520, something you can see in our pictures.

Standing 1130mm tall, 185mm wide and 320mm deep the AE520s are large, but the smooth American Walnut wood veneer of our samples made them look reasonably unimposing. At a weight of 30kg apiece they were not so easy to move, and there are aluminium out-rider feet for stability, fitted with adjustable spikes. Surprisingly, there is just one pair of terminals at rear, eliminating the possibility of bi-wiring. Grilles are held on by magnets, so easily removed.

A nicely built and finished loudspeaker all round.

With high power handling from no less than six drive units the AE520s were an obvious candidate for power – so that’s what they got courtesy of Musical Fidelity’s M8xi (600 Watts) also in this issue. However, I did also use our Creek Evolution I00A with its easier going sound, allied to strong bass (it was a major difference).

Loudspeaker cables were Chord Company Signature Reference, a neutral but ‘quiet’ and revealing cable. Signal source was our Oppo BDP-205D Universal player spinning CD and connected by optical digital cable to the M8xi.

The AE520s are relatively dry sounding and a little bright with grilles off. But then again they are also dramatic and I stumbled away from them a bit shaken – after using the Musical Fidelity M8xi at 6am in the morning when the office building and street outside were deserted. That’s when volume could be turned up – as these ‘speakers demand – and I was quite literally shaken by tracks like Safri Duo’s Samb Alegro where the pounding synth ‘kick drum’ was moving my body and the settee upon which I sat. Probably at that point there was around 100 Watts going into the ‘speakers on peaks -perhaps more – but they sounded supremely relaxed, totally unfazed.

What I was assessing by doing this was bass quality and potential bass distortion (doubling). And the outcome was both thumbs up. What the AE520s offer is even, well damped and controlled bass that comes across as correctly in balance yet of superb definition. No boom, no waffle – just brutal low end power able to move the body. Not quite big Tannoys, I thought to myself – but close.

But I haven’t said anything yet, because the Acoustic Energys were impressive for many reasons. First is that they deliver a very large sound stage, with pin-point imaging. The dominant saxophone in the Pink Panther theme (CD) had height to it as well as width, and it was almost casually plucked from the background. I thought to myself “line source” and although technically they are not a classic line source their sound does have height, width and scale. The choir behind Mercedes Sosa singing Misa Criola had similar scale, and it was clearly behind Mercedes Sosa’s vocals, giving good resolution of backward layering. This was helped by a dry, clean sound free from colouration. I was greatly impressed by this: the AE520s have the sort of line-source presence of our Martin Logan ESL-X hybrid electrostatics. It adds to drama. 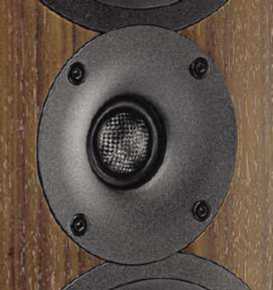 Go the tweeter’s role in the scheme of things was made clear and forceful via the M8xi, his guitar strings cutting out like razor blades. Superb speed and definitive attack but arguably a bit beyond real. I listen to my son playing acoustic guitar and it doesn’t sound like this. It’s fast but not challenging – and there’s so much more timbral richness and colour.

Connecting up our Creek Evolution I00A amplifier produced a dramatic change, beyond what I was expecting – suggesting transparency and insight from the ’520s. Now there was an easier and more mellow sound, lacking fierceness. However, gone was the slam and visceral speed of the M8xi, also its cohesiveness when working from internal DAC. So amp. matching to this revealing loudspeaker is an important issue.

The rear carries a slot port to reflex load the three bass units. One pair of terminals only, making bi-wiring impossible.

Also, I went from listening without grilles initially to using them and this did help slightly to reduce sharpness.

It eventually struck me that these are loudspeakers that would do justice to, and benefit from, connection to our Icon Audio Stereo 30 SE valve amplifier – and so it was. The sound deepened, became more organic and flowed better: it’s a good loudspeaker for valves.

With its vertically high, focussed sound stage and enormously deep bass Acoustic Energy’s AE520 comes over as dramatic. A slightly dry balance makes it work better at high volume than low volume I found; it cruised along imperiously with the wick turned up.

Excellent transparency highlighted amplifier differences quite alarmingly, and bright amplifiers I would say are best avoided, although others may think differently. This all depends upon what sort of sound you like: no doubt that with Musical Fidelity’s M8xi power amplifier the AE520 was dramatic-to-frightening, according to volume control position! This is certainly a loudspeaker worth auditioning; just

The two top units are bass/ midrange drivers covering 370Hz-3.5kHz, in D’Appolito arrangement around the tweeter.

bear in mind that to hear down to its very-low lower limit of 30Hz you need a room at least 18ft long, speakers at one end, ears at other (high pressure points). Then the settee will move – and bits of your body with it.

The Acoustic Energy AE520 has almost peculiarly wide bandwidth, one of the widest and flatest of any loudspeaker.

The large multi-driver cabinet reaches very low, essentially flat down to 30Hz our analysis shows. That compares to 40Hz-50Hz of most. The slot port (red trace) peaks narrowly at around 30Hz and the impedance trace shows it is tuned to 36Hz (centre of the dip). As there is no broad bass peaking, bass will be strong and deep but not overemphasised. There may be over-drive in small rooms however (below 14ft long); it takes a room 18ft long to fully support 30Hz.

Frequency response extends smoothly up to 20kHz with a small dip at crossover (3.5kHz) to the tweeter. With grilles off the tweeter comes in hard above 5kHz and this will ensure some brightness; there’s +2dB lift at 7kHz as shown. However, the grille flattens this to give a correct result, so there is some adjustability here.

Sensitivity was high at 88dB sound pressure level (SPL) from one nominal Watt (2.8V) of input (90dB quoted). Good – especially when considering this is a relatively high impedance ‘speaker, measuring 7.5 Ohms with pink noise. Around 40 Watts will be sufficient for high volume in most rooms, with 100 Watts to go extremely loud.

This is a cleverly engineered loudspeaker in classic AE fashion. It has very wide bandwidth yet is accurate. A very good set of results. 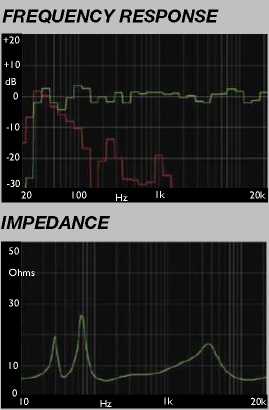