This Danish brand, new to the UK, has made a name for itself on the Continent with its passive-to-active speakers. Read our System Audio Legend 40 Review.

The 1994 Keanu Reeves movie Speed rewrote the Hollywood rulebook when it came to action cinema. System Audio’s Legend 40 is not quite as disruptive, being a three-way floorstander with a mid-level price tag, but it too has a focus on speed. ‘A System Audio speaker is much faster than a conventional loudspeaker’, boasts the Danish brand.

Time to buckle up, then…

The brand will probably be unfamiliar to many UK audiophiles, as it only recently arrived in the UK via distributor Karma AV, but System Audio has a history going back to the 1980s. Founded by musician (and company head) Ole Witthoft, it now sells a trio of speaker ranges – the affordable Saxo, premium Legend and the active Legend Silverback, plus subwoofer, centre channel and on-wall variants.

The Legend 40 tower auditioned here is priced at £ and, as with all of the company’s models, is available in either a satin black or satin white finish.

Unusually, the speaker has an upgrade path from wired passive to wireless active. Should you wish to at a later date, System Audio will retro-fit its rear- mounted amplifier/DSP module, effectively turning the Legend 40 into its Legend 40 Silverback [see boxout, p55].

When it comes to driver implementation, System Audio boasts of an ‘holistic approach’. The tweeter, midrange and bass units in its Legend family were designed ‘in one coordinated process’, says Witthoft. ‘We focus on building a uniform sound character while making sure we spend resources on features audible to the user.’ Continuing the holistic theme, the speakers are hand-built in Denmark, one employee working on one speaker from start to finish.

The Legend 40 drivers are, from top to bottom on the front baffle, a 25mm tweeter, 135mm midrange, and two 135mm woofers. The mid and bass drivers use a woven fibre cone chosen for its combination of low weight and high damping, supported by a rubber surround with in-built resonance control rings.

They appear to be identical, but lengthier voice coils on the woofers, which patrol frequencies below 400Hz, enable a longer throw. The two bass units work out of a rear-firing port, the combination good to a claimed 30Hz [see PM’s Lab Report, p57].

The cabinet’s MDF front baffle is 29mm-thick, set on a 5mm walnut inlay, while the curved sides use six layers of pressed 3mm MDF. Internally, an 18mm MDF plate separates the midrange and bass drivers into separate chambers.

RIGHT: 135mm woven-fibre midrange [top] and two 135mm bass drivers look identical but the mid unit has a shorter (lighter) voice-coil. The tweeter with DXT lens/waveguide was developed with the Danish patent holder

System Audio says its Legend speakers represent a ‘world’s first’, as they can be upgraded to active/wireless operation through the addition of its Silverback amplifier/electronic crossover module and Stereo Hub. For the Legend 40s, the former splits a claimed 300W of amplification across the drive units, and introduces DSP that results in a boosted low-end performance down to an anticipated 20Hz. The Silverback module caters for analogue line and digital network sources, but for greater wireless freedom System Audio’s Stereo Hub uses WiSA technology (not your own Wi-Fi network) to support 192kHz/24-bit streams. The hub also includes a range of inputs including analogue line, and digital optical/coaxial, USB and HDMI. Additionally, it integrates Apple AirPlay, Chromecast, Spotify Connect and Bluetooth. The Silverback’s WiSA connection also means it’s compatible with other WiSA streamers, such as Primare’s SC15 Prisma.

the costlier Legend 60 adds two more 135mm bass drivers – and certainly merits the brand’s ‘slender’ description. It’s therefore a speaker that will please anyone seeking some hi-fi discretion (but probably not those who want a design statement), and with the black magnetic grilles in place, my satin black sample seemed to almost disappear from view.

System Audio expects its speakers to appeal to the spatially challenged, and this is emphasised by a recommended placement of just 15-35cm from the rear wall – in fact, it suggests the Legend 40 is suited to close-to-boundary placement, another string in its living room-friendly bow.

The modest 19.5kg weight and manageable dimensions also mean that experimenting with positioning and toe-in is pain-free.

The use of lightweight driver materials in the pursuit of ‘speed’ is repeatedly in evidence when listening to the Legend 40s. They seem to relish the rhythms of music and quick-fire instrumentation, resulting in a clear, dynamic presentation. And the slim form doesn’t equate to a lightweight sound. Bass extension is pleasingly deep and tracks that demand soundstage width and depth are well-served.

Load up ‘Cream’, from Prince’s 1991 album Diamonds And Pearls [Warner 7599-25379-2; 44kHz/16-bit download] and the Legend 40s quickly gets into the funk/pop groove. There’s appreciable snap and clarity to bass and drums, and you get the sense that the speakers’ driver quartets are operating in total harmony. This piece calls for space between the instruments, and these floorstanders oblige. The stop/ start ability of the woofer and midrange drivers leaves bass notes and wah-wah guitar sounding wonderfully tight, and works wonders with the staccato vocal.

It’s such a dextrous performance that I dug out Machine Head’s ‘This Is The End’ [Unto The Locust, Roadrunner Records RR7702-2], which rampages at a furious pace and underpins razor-sharp thrash guitar riffs with 16th note kick-drums. It doesn’t so much tumble from the Legend 40s as march out like a well-oiled regiment.

Norah Jones’ jazz-tinged debut album Come Away With Me [Parlophone; Tidal Master] offered a change in pace. The title track’s softened composition makes little use of the Legend 40s’ rhythmic attributes but, instead, showcases their ability to resolve subtle detail. The reproduction of Jones’ vocal.

Her midrange is soft but well-rounded, her voice cracking gently as she ventures higher. She’s put firmly in the spotlight, close-mic’d but with a very slight reverb, while soft percussive brushing is as eloquently conveyed as the piano accompaniment. These speakers seem neither overly warm nor unduly bright – just clean, incisive and typically able to get the best from high-quality recordings.

From Jones’ acoustic double-bass to the synthetic low-end of Hans Zimmer’s original soundtrack recording for Blade Runner 2049 [Epic 19075803092]. The Legend 40s put in a commendable effort with the dramatic low-frequency rumbles

of the opening instrumental, finding textural details and conveying scale. Yet they fall short of unearthing the ominous, almost terrifying depth that beefier loudspeakers can, reaching the limits of their driver design and cabinet volume.

That said, this System Audio pairing has the knack of sounding bigger than you might imagine, and can image precise details as well as creating a fluid, forward-feeling wall of sound. AC/DC’s ‘Hell’s Bells’ [Back In Black; Columbia 510765 2] sits in the former camp, with a relatively sparse mix that places

LEFT: The two bass drivers work out of a rear-facing port below 400Hz, the sealed midrange between 400Hz-2kHz and the treble above. The three-way, 4th- order crossover is not split, so bi-amping/ bi-wiring is not accommodated

its twin guitars left and right, cymbal crashes mid-right and a kick-drum emanating dead centre. Brian Johnson’s tobacco-torn vocal then pushes through from behind. However, with the double whammy of Pink Floyd’s ‘Breathe (In The Air)’ and ‘On The Run’ [Dark Side Of The Moon; Tidal Master], the Legend 40s have to become more involved to capture the dreamy nature of the first recording, sending flange guitars soaring and giving body to organ notes, and then integrate seamlessly to hold ‘On The Run’s signature stereo pans in check. It’s a thrillingly evocative performance.

With their entirely unfatiguing sound, my listening began to resemble a kid at the pick and mix counter, and regardless of track I always found an attribute that made me sit up and pay attention, be it Adele’s mesmeric vocal in ‘Hello’, the foot-tapping rhythm of The Hollies’ ‘Long Cool Woman In A Black Dress’, or the sweet but raspy harmonica in Bruce Springsteen’s ‘Nebraska’. And while the clean, revealing nature of the Legend 40s means they deserve a diet of pristine recordings, even a low-fi Spotify stream of Johnny Winter’s rough-and-ready ‘Self- Destructive Blues’ warranted a thumbs up, with its blues solo given authentic crunch and bite.

The Legend 40s are an impressive landing into the UK market for System Audio. From slender, non-descript cabinets comes a performance that’s always descriptive of the music, whether it calls for delicate, detailed highs, a midband capable of softness and steel, or nuanced, unflustered bass. If you seek rhythm, control and slick imaging from cabinets that won’t dominate a room, this is a fine place to start.

A four-driver, reflex-loaded three-way It may be, but the Legend 40 remains compact as floorstanders go, so even with a 4ohm nominal Impedance its rated 90dB sensitivity looks very optimistic. My measurements suggest a figure some 2.5dB lower Is more realistic – taken either at 1 kHz/1 m/2.83V or as a mean from 500Hz-8kHz. SA indicates a minimum 3ohm/140Hz Impedance for the Legend 40 and this was matched on test at 2.9ohm/130Hz – this plus relatively big swings in phase angle from +40° to -63° make for a very tough load through the bass region. Weedy amplifiers need not apply… Distortion, principally 2nd harmonic, Is <0.5% through bass and midrange (re. 90dB SPL/1m) while an Increasing 3rd harmonic pushes this up to <1% through the treble – all worthy figures nonetheless.

Forward frequency responses measured at 1m on the tweeter axis [see Graph 1], showed a pair matching error of 2.3dB between the two cabinets due to a dishing In output from 1.3kHz-4.3kHz from one sample [red trace]. Output picks up through presence and treble with modest +2.8dB response errors, although the grille [blue trace] produces cancellation notches at 4kHz and at 13kHz. The step In response at 1.2kHz correlates with a driver breakup mode [see Graph 2] and is close to the 4th-order 2kHz mid/treble crossover. Corrected nearfleld bass measurements, with no boundary reinforcement, show a similarly steep LF roll-off below 100Hz [green shaded area] – the two bass drivers peak at 117Hz and the port Is tuned to a much lower 40Hz, so the modest 50Hz bass extension (-6dB re. 200Hz) will be much Improved by near-wall positioning. PM 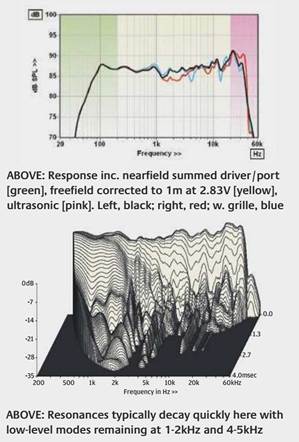 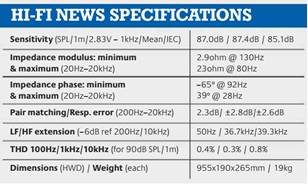