From a new and extended Raidho family these Scansonic floorstanders now benefit from the ‘GamuT touch’. Read our Scansonic MB5 B Review.

We’ve been here before, reviewing the Scansonic MB5 speakers three years ago [HFN Aug ’17]. However, collective amnesia has not set in, for despite the MB5 B looking near enough identical in its choice of black or white silk finishes, it is in fact a new version of the design, reworked by chief designer Benno Baun Meldgard. Hence the ‘B’ suffix on the new model.

And that’s where the intrigue really starts for, as you’ll read in KH’s Lab Report [p49], while everything about the new speaker looks the same, from the cabinet to the drivers, the measured performance suggests we are looking at two completely different models. In practice, the MB5 B has lower sensitivity, a re-shaped frequency response, and better bass extension but with higher distortion. Fascinating…

Meldgard was previously chief designer at another hi-fi brand, GamuT [see boxout, p47] but fast forward to today and Raidho, Scansonic, and GamuT are all now owned by Dantax A/S, a company started nearly 50 years ago in Pandrup (the North of Denmark’s Jutland peninsula), which is where it’s still headquartered. You’ll pass a well-known hi-fi name with alarming frequency when travelling about here – DALI, Dynaudio, Jamo and of course Bang & Olufsen are among the leading lights.

There’s necessarily some pooling of talent, as is the case with Dantax, which started out buying in components when it began production in 1971, before acquiring the celebrated driver brand ScanSpeak in 1977. OK, it later sold that operation off to another company, which still hand-builds ScanSpeak drivers in Denmark, but you get the idea: audio manufacturing runs deep around here.

Back to the MB5 B, and the publicity tells of ‘an all-embracing upgrade’ for the MB range, which originally took its name from designer Michael Borresen, who was responsible for Raidho’s speakers, and then the launch of the MBs as a more affordable take on the same technologies. Meldgard, having arrived with GamuT, has made significant changes to the six-strong lineup from the standmount MB1 B through to the range-topping MB6 B with its array of six mid/bass drivers. Meanwhile the simplified version of the Raidho ribbon planar tweeter is retained without revision. This bespoke driver uses a Kapton/alloy sandwich membrane just 20 microns thick, weighs just one gram, and is sandwiched between powerful neodymium magnets.

The midrange and bass drivers – the MB5 B has a total of four 115mm units, between which mid and bass duties are split – use a die-cast aluminium basket for rigidity and retain their carbon cones, but have been treated to a new low-loss spider in their suspension. These features, plus the powerful magnets, combine to offer a claimed improvement in both dynamic handling and bass response.

The company says this also helps reduce the running-in required before the drivers perform at their best, though it also suggests that during break-in you ‘don’t hold back on the volume as it is the movement of the drivers that makes the speakers come to life’. Editor PM follows up on this in his listening notes [p47]. Of equal significance is the redesigned crossover, better integrating the drivers that are also ‘time-aligned’ by the gently angled baffle.

Now there may be some semantics escaping us here, as we think the cabinet principle is unchanged between the two generations, but apparently ‘the previous acoustically vented cabinets have now been replaced with a ported cabinet… tuned for optimal impulse response’. This is said to improve the ease with which the speaker can be positioned in the room. Either way, the trio of ports sitting above

RIGHT: The 115mm carbon-fibre mid units and pair of 115mm bass drivers look identical to those in the MB5 but now feature new suspension systems. The ribbon/planar tweeter is retained as are the stabilising alloy outriggers

the single set of speaker terminals are beautifully sculpted into the narrow ‘spine’ of the tapered cabinet – it’s a very elegant solution [see pic, p49].

That sleek-looking enclosure, built from ‘high density MDF’ (should that be HDF?) has also been modified to optimise air-flow, allowing a reduction in the use of internal damping. Also in the quest for ‘better coherence and dynamics’, the cabinet is shaped to avoid internal reflections and standing waves, and is braced to reduce vibrations. Meanwhile the top-plate and front baffle are treated to carbon- fibre inlays, albeit purely for cosmetic reasons. The speakers sit on smartly finished aluminium outrigger feet, which are fitted with substantial, easy to adjust, blunted spikes.

Scansonic is very particular about the placement of its MB5 B floorstanders, writes Editor PM – ‘far apart (9ft) but close to the listener… plenty of toe-in… at least 3ft from rear walls… will tolerate being a few inches from side walls…’. And this advice is well worth heeding for these rear- ported cabinets, however well-braced and limited in internal volume, start to join in if the speakers get a sniff of a rear wall.

Add to this the long run-in time of the reworked bass drivers – the new suspension still seems reluctant to relax – and you’ll probably find the MB5 Bs happiest at least 1m into the room. In previous generations it was the planar magnetic tweeter that took its sweet time to come on song, but with Benno’s Bs it’s all about the bass.

For example, the deceptively simple and thoroughly charming Kate & Anna McGarrigle’s French Record [Hannibal HNCD 1302; 44.1kHz/16-bit] was mired in low frequency fluff until the speakers were pulled far further into the room than I’d typically place my significantly larger B&W 802 D3s [HFN Dec ’15]. Nevertheless, with bass, organ, tuba and drums all part of this contemporary folk mix there’s a lot of grumbling detail to untangle.

Once bathed in fresh air, the MB5 Bs made more than a passing gesture at unravelling ‘Entre Lajeunesse Et La Sagesse’, one of many collaborations with Canadian poet Philippe Tatartcheff and a joyous, spicy folk instrumentation now released to raise a smile from this locked-down listener.

Partnered with Constellation’s Inspiration Monoblocks [HFN Oct ’19], the MB5 Bs also delivered more than a few moments of startling reality – Christian McBride’s double-bass affording a magnificently deep and thunderously resonant foundation for the opener to Diana Krall’s Love Scenes [Universal Music/ Verve; 96kHz/24-bit]. Percussion, save for piano, is absent and guitarist Russell Malone’s rhythm figures verge on the subliminal, but this is all part-and-parcel of the vibe to Ms Krall’s fourth album.

Such is the grip and sheer power of the MB5 B’s delivery you’ll be tempted to turn up the volume and wallow in the presence in what might otherwise have been background, late-night listening.

So, these Scansonic speakers are designed as a junior version of the Raidho range, originally designed by the same hand but now re-tuned by the former head designer of GamuT. So how did we get here? Well, having sold off its ScanSpeak factory in Denmark after 20 years of ownership, Dantax was co-operating with overseas partners to develop and manufacture products until in 2009 it took over Raidho, and more recently launched the Scansonic brand as a more affordable counterpart to the Raidho line.

And GamuT? Well, the two companies didn’t quite merge. As the Dantax announcement of 2015 put it: ‘After some years of weak results, the bank and the board of Gamut A/S have decided to liquidate the company, and Dantax Radio A/S has purchased all the assets. Dantax Radio has also hired Gamut’s chief designer Benno Baun Meldgard, who is known as one of the very best designers in the industry. The amount of the investment is only a modest amount.’

And the original designer, Michael Borresen? Having parted from Raidho along with colleague Lars Kristian Kristensen who originally brought Borresen onboard at cable brand Nordost before they created Raidho, he now runs speaker company Borresen Acoustics. Yes, still in Denmark.

LEFT: The narrow, tapered cabinet profile dictates the use of multiple reflex ports while the reworked crossover still only offers one pair of 4mm cable terminals and no bi-amping/wiring

Frankly, this system can reproduce a visceral weight, power and sheer musical presence that eludes many far bigger floorstanders.

If the original MB 5 would sound effortless, calm and perhaps a little creamy then the MB5 B stands ready to bring more energy, vigour

and chest-pounding vitality to the music at hand. Perhaps the ‘B’ should be retitled ‘D’ because while this reworked version looks identical, when played hard it reveals itself to be a sonic doppleganger. OK, so the MB5 B is no evil twin, but it does play Mars to the MB5’s Venus…

The ribbon-esque treble unit, unchanged here, sounds deliciously open and extended without a hint of brightness. There is still plenty of ‘air’ but absolutely no coarseness or brittleness, qualities that feed all the way down through mid and bass to ensure the MB5 B creates large and unforced soundscapes.

In conductor Andrew Litton’s hands, Stravinsky’s The Firebird [Bergen SO; BIS-1974, 44.1kHz/24-bit] is appropriately fleet of foot and the MB5 B expresses this very fluid­sounding recording with a light touch. The string pianissimi in the ‘Berceuse’ are realistically feathery just as the appearance of Kastchei’s monster guardians is accompanied by an appropriately menacing onslaught of percussion.

As I have already indicated, slide these slimline floorstanders into just the right spot and their profile diminishes entirely, leaving a wonderfully unfettered and captivating musical performance. Once the MB5 Bs are on song, you’ll be hooked and listening for hours…

It is very rare to come across two loudspeakers that look ostensibly identical and yet measure and sound like two entirely different models from two unrelated brands. Such is the gulf between the MB5 and GamuT-inspired MB5 B. Not that the MB5 was anything less than a fine speaker, but if it was merely a good design waiting to become truly great, then it's the MB5 B that provides the necessary flourish.

Scansonic specifies a 90dB sensitivity for the MB5 B, and that fits well with the 89.8dB we recorded from the MB5 [HFN Aug ’17]. But we recorded much lower figures this time, the industry standard pink noise figure of 86.1dB and ‘music’ figure of 85.9dB indicating that an 86dB specification would be more realistic. The treble responses/sensitivities of the 5 and 5B are similar, but it’s as if the output of the bass/midrange unit has been slugged in the 5 B. Unusual as it is to specify impedance as ‘<4 ohm’, it’s a neat way of incorporating minimum impedance and nominal impedance in a single figure (nominal being 1.25x minimum). But Scansonic’s 4ohm minimum is significantly higher than the 2.8ohm minimum modulus we recorded. Impedance phase angles are well controlled but even so this low modulus results in a minimum EPDR of 1.6ohm at 35Hz, with another dip to 1.8ohm at 107Hz, so the MB5 B rates as a more than typically difficult load to drive.

Forward frequency responses [Graph 1, below], measured at 1m at tweeter height, show a distinctly shelved-up treble and sufficient variability to record response errors of ±4.8dB and ±4.1dB respectively, which are a little on the high side. Pair matching error is poor at ±3.2dB over the same 200Hz-20kHz frequency range, although the largest disparities are quite narrow-band at 3kHz and 8kHz. Diffraction-corrected nearfield bass measurement recorded a bass extension of 54Hz (-6dB re. 200Hz), which is not atypical for smaller floorstanders. As we often find with planar tweeters, high frequency distortion was 10x higher than typical of the best dome tweeters. The CSD waterfall [Graph 2] indicates a few treble resonances. KH 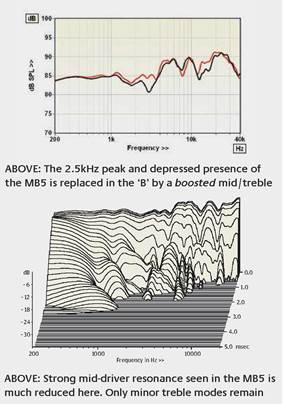