Q Acoustics has produced a handful of flagship Concept speakers over the six years since the range became available, but none has reflected the ‘concept’ name quite as much as this newest addition to the line-up. 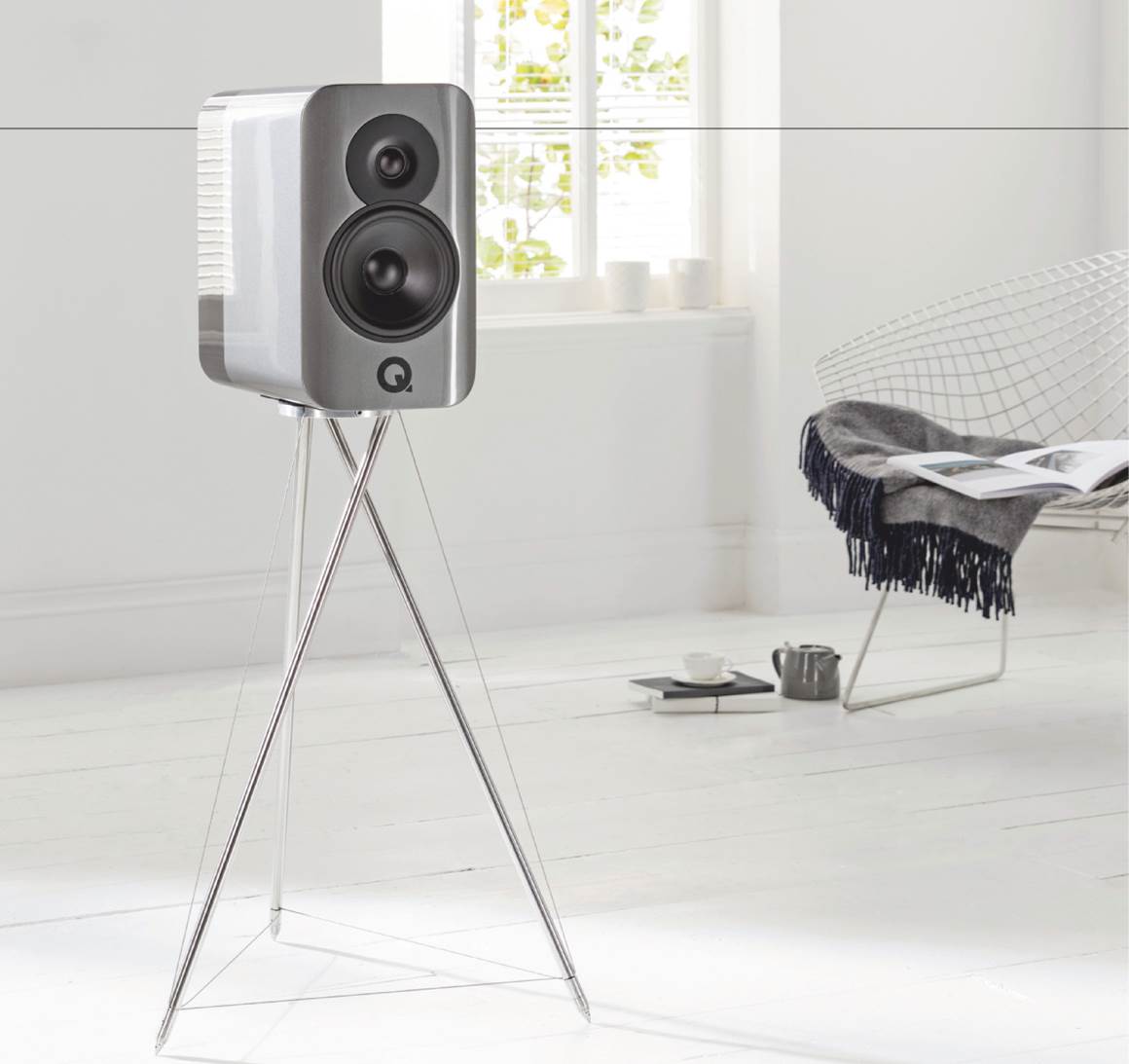 The Concept 300 stand-mounters not only build on the innovative driver and cabinet technologies introduced by the Concept 20s, 40s and 500s, but also widen their focus beyond the speaker boxes to the stands. The spindly-looking tripods upon which these speakers sit would not look out of place in a modern art exhibition, but they were designed exclusively for the Concept 300s and are included in the price.

It should be obvious, but to ensure they perform at their best, speakers actually designed for stand-mounting should be placed on stands— and at this level, it’s an absolute must. Q Acoustics’ engineers felt they could improve on conventional solid stand designs, the idea being that such stands, with their relatively large surface areas, have significant acoustic footprints, and transmit a lot of sound into a room.

In a bid to support the speakers better, the futuristic-looking three-pronged prism stands apparently apply Buckminster Fuller’s 1960 works on ‘tensegrity’ (‘tensional integrity’) to the loudspeaker domain, according to Q Acoustics. It says that how the principle of tensegrity applies to the Concept 300 stands is that the stand’s self-supporting structure is made up of elements either in compression (the load-bearing aluminium rods) or tension (the steel cables) and aims to reduce the transmission of external vibrations through its small surface area and high strength-to- volume ratio. Each speaker has a spring-loaded plate built into its base and the tripod stand bolts onto this. Any vibrations in the springs are converted into heat by a special damping material.

Q Acoustics says that its research into the vibration of speaker stands showed that the conventional stand designs it evaluated vibrated three times as much at frequencies higher than 300Hz than its own tripod design.

Once they’re set up, you might initially be tempted to approach Q Acoustics’ Concept 300 speakers rather cautiously, as you would expensive items in a china shop, but it turns out that they’re actually reassuringly stable. Their suspension means there’s a fair amount of give but when we put one to the test by giving it a fair bit of ‘push and shove’ the structure remained upright throughout.

The Concept 300s are not simply existing speakers on new stands. Their 165mm diameter paper-coned bass/midrange driver features a newly- developed rubber surround rather than the popular (but prone to disintegration) foam that is often used as a cost-saver, and a magnet that has been enlarged over the Concept 500 design to help control the cone and improve the efficiency of the single driver in a smaller cabinet. The new driver also has a voice coil that is 35mm in diameter—quite a bit larger than the usual 25mm diameter voice-coil one would normally expect to find on a driver of this size. 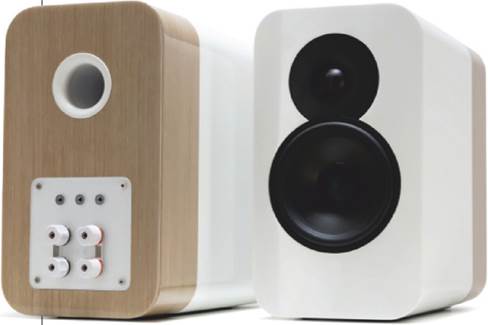 THE CONCEPT 300 ALSO USES A NEW 28MM SOFT-DOME TWEETER THAT INCORPORATES THE WIDE-DISPERSION TECHNIQUE AND DECOUPLED ISOLATING MOUNT DEVELOPED FOR THE CONCEPT 500.

Q Acoustics says the Concept 300 also uses a new 28mm soft-dome tweeter that incorporates the wide-dispersion technique and decoupled isolating mount developed for the Concept 500. The latter protects the tweeter from vibrations generated by the mid/bass unit. I am a great fan of isolating tweeters in this fashion, because the performance of a tweeter can be dramatically altered by cabinet vibrations. By way of example, consider this extreme example: To deliver an audio signal at 10kHz, a tweeter dome has to move back and forward ten thousand times every second, and this forward/ backward movement amounts to only a few microns of travel. So if a loudspeaker cabinet is also vibrating at 10kHz (sympathetic vibration caused by the tweeter itself), and it goes ‘backwards’ at the same moment the tweeter’s dome goes ‘forwards, the dome’s net movement would be zero, so you wouldn’t hear anything at all. Q Acoustics is far from being the first speaker manufacturer to isolate a tweeter from a front baffle… but it must be said that the practise of isolating tweeters from baffles is not yet common, (though increasingly so in recent years) because of the increased costs involved and the additional difficulties it creates during the manufacturing process.

The Concept 300s make use of Q Acoustics’ cabinet innovations too, ensuring they contribute as little as possible to the overall sound. As with the Concept 500s, the Concept 300s employ P2P (point-to-point) bracing, which adds support to the parts of the cabinet that need to be stiffened to make them quieter. A soft, non-setting decoupling material, called Gelcore, sits between the cabinet’s three layers of MDF. Any vibration transmitted through the layers is simply dissipated into heat within the gel.

On the outside, Q Acoustics has maintained its traditionally clean, contemporary and minimalist aesthetic, and while the stands may divide opinion, the speaker cabinets are beautiful. At 400mm deep, their large overall footprint is exacerbated by the fact they sound best when positioned a little out in the room, but because they look so good, and are so beautifully finished, the fact that the Concept 300s are so visually obvious in a room is a positive, rather than a negative.

Q Acoustics has at least tried to disguise the depth of the cabinet by applying a panel of wood veneer to the rear end of the otherwise gloss-painted finish. The sample pair I was loaned for review came in a ‘white gloss with pale oak’ finish, but there are also ‘black gloss with deep rosewood’ and ‘polished tourmaline with ironwood’ options available.

To avoid screws loosening over time, the Concept 300’s drive units are held in place from the rear with tension-retaining spring bolts that Q Acoustics says will maintain their torque. The bi-wirable terminals can accept bare wires, spades or banana plugs, and a jumper’ above them allows you to alter the output level of the tweeter by ±0.5dB to adjust for speaker position, room conditions and/or your own personal preference.

IN USE AND LISTENING SESSIONS

I reviewed the Q Acoustics Concept 300 speakers in a system where they were driven by a Gamut D3i preamplifier and Gamut D200i power ampli­fier, with the music source being a Naim server. The aural pay-off from all the work that’s gone into the Concept 300s’ cabinets was immediately clear. There’s certainly a sense that you aren’t listening to how the cabinets sound. The quiet­ness of the cabinets can be felt physically through the lack of vibration during playback, and audibly by means of the impressive outright clarity and transparency of the 300is’ sound.

The consistency of the sonic character of the 300is compared with other speakers from Q Acoustics is also very reassuring. 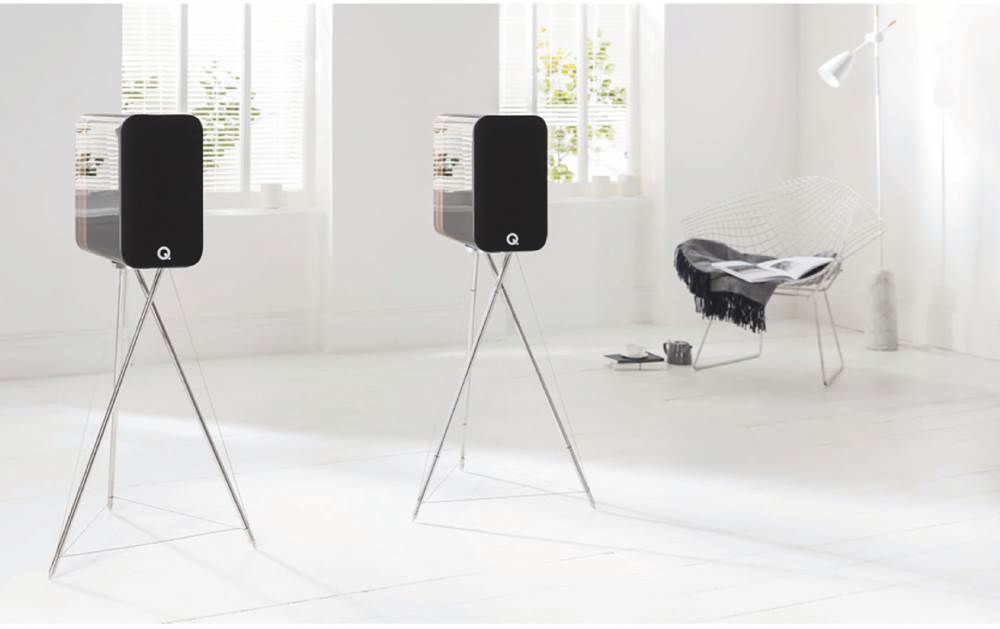 There’s all the refinement and warmth I’ve come to expect from the current Q Series speakers, presented on a wide-open soundstage that’s just as familiar in its impressive breadth and spaciousness.

Bass is surprisingly abundant for a stand-mount design—especially one with a single, relatively modestly-sized bass/midrange driver—and is also unwaveringly taut and rich in character. The Concept 300s have no trouble anchoring a cello or driving a beat-led composition. Frequencies higher up the scale are no less deserving of praise. The midrange is refined and clear, the treble biting yet measured. When I played Aldous Harding’s Blend, for example, her room-filling vocal has a velvety texture through the Concept 300s, its tenderness preserved and its nuances plain to the ears. Meanwhile, the acoustic plucking has a portly presence that’s equally tangible. Switching to Radiohead’s Reckoner I could almost pinpoint the cymbals and shakers, as the elaborate density of the track’s composition works in the Concept 300s’ favour and shows off their strengths.

Frequencies higher up the scale are no less deserving of praise. The midrange is refined and clear, the treble biting yet measured.

The polite beginnings of the guitar line, followed by Yorke’s graceful vocal, all feel at ease, able to outstretch without bumping into each other. It’s a scale of sound, coupled with a ruthless organisation, that makes Dynaudio’s Special Fortys, which would be an obvious competitor, seem almost compressed in comparison—their soundstage not quite so profound, nor their presentation as cultured.

But while I am accustomed to Q Acoustics speakers favouring warmth and refinement over outright liveliness, the Concept 300s fall short of the Special Fortys when it comes to rhythmic drive and dynamic expression. At this level, I would expect more. Playing Drake’s Headlines, the Special Fortys immediately reacted with enthusiasm. They hot-footed the synths with a militant timing and an almost habitual cohesion that’s missing in the Q Acoustics. Neither did the Qs quite hurry things along or grip a rhythm as well despite the fact that they respond with greater calculation, unrivalled breadth and a textured warmth that fleshes out the midrange. Yet dynamically, while far from static or uninteresting, they fail to soar.

The Q Acoustics Concept 300 loudspeakers are innovative stand-mounters that technologically and sonically are set apart from a lot of similarly- priced competition.