Pro-Ject has updated its Classic turntable with a selection of new improvements. Ed Selley gives it the runaround. Read our PRO-JECT THE CLASSIC Evo Review. 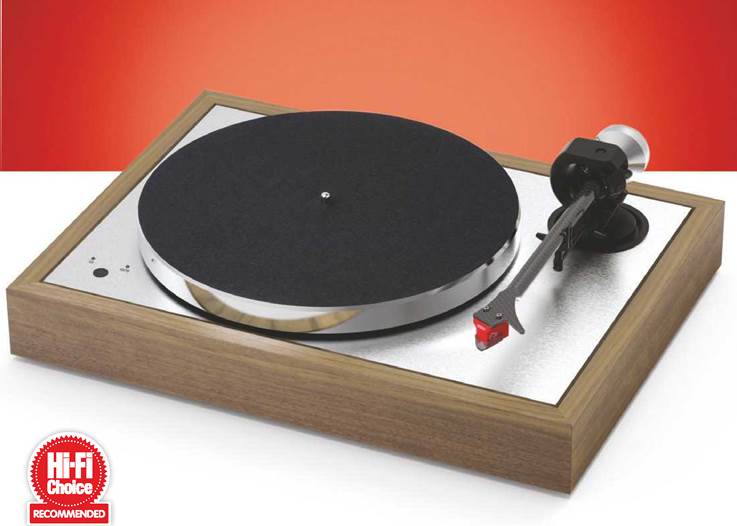 Pro-Ject’s turntable range is so comprehensive that it’s not an understatement to suggest it has a model for every occasion. Even allowing for this, it has from time to time released a product that feels like it came into being purely because the company felt like making it.

Built to celebrate the manufacturer’s 25th anniversary, The Classic was a fine example of this. Pro-Ject already had some strong turntables available at similar prices, but The Classic offered an altogether different aesthetic to any of them.

Now, The Classic has grown into The Classic Evo, delivering a selection of improvements without changing the overall design principles. Although it shares almost no parts in

common, the design of the Classic formed the basis of the limited edition The Vienna Philharmonic Recordplayer, which suggests that there was more to give from the basic design. It utilises a suspended sub-chassis which, while dating back over 50 years, has some advantages to this day. By keeping the motor detached from the playing surface, it’s possible to reduce noise and interference compared with designs that have the platter and motor attached to the same assembly. The downside is that traditionally the two separate chassis needed a complex suspension to keep them apart – making for an arduous setup process.

Pro-Ject has managed to neatly side step this by using a sextet of Thermo Plastic Elastomer (TPE) spheres, which offer the isolation needed without the attendant complexity. The plinth of The Classic Evo comes out of the box in a single section that requires no further adjustment. This is the same as the preceding model, but the first of the changes to the new Evo spec is what slots into it. The sub-platter is now made of the same aluminium alloy as the main platter, which rests on it via a layer of TPE damping. This effectively controls resonance between the two sections and results in an impressively inert playing surface.

The AC motor that acts on the sub-platter is the same as before and uses a 15V DC power supply that converts to AC on board the Evo – a process that Pro-Ject says makes it more resistant to sources of external noise. There is an electronic speed control offering 33, 45 and 78rpm via a pair of speed selection buttons.

The other areas that have undergone a major change are the tonearm and cartridge. The former is the latest-spec version of the 9in carbon fibre arm. Taking a thin-walled aluminium tube, it’s wrapped in carbon fibre weave to add strength and rigidity. The bearing housing has been updated and there is a chromed counterweight that is damped with TPE. This is an upgrade from the original, but some of the idiosyncrasies remain. The anti-skate mechanism is on Pro-Ject’s standard line and weight system, but the correct setting point for the supplied cartridge is tucked well underneath the bearing housing, which is pretty fiddly. Adjusting the tracking force is straightforward, though.

The supplied cartridge is the Quintet Red – the most affordable member of Ortofon’s Quintet range. It has a bonded elliptical stylus combined with a coil that acts on neodymium magnets. These are placed in a thermoplastic body, which comes pre-mounted on the arm. This is a substantial step up from the 2M silver

The Evo is the very essence of an all­rounder regardless of the style of music the original was fitted with, although it is available to special order without cartridge too.

The styling is unchanged from the original and this is no bad thing. The Classic Evo is an unashamed homage to turntable designs of the past that is done with a pleasant lightness of touch that means it doesn’t feel totally derivative. There is an argument that the carbon fibre arm feels a little incongruous against its retro lines, but it remains one of the major points of the brand identity which helps it to work. You might also argue that the vivid blue LEDs on the speed setting controls would have looked better in red, but this is by no means the end of the world. 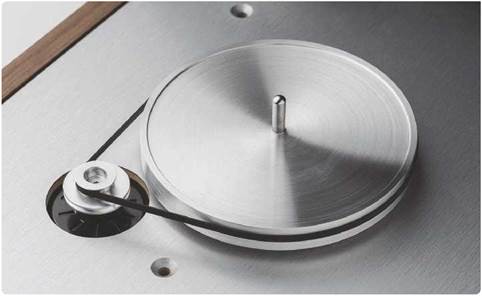 The sub-platter is made from the same material as the main platter, which rests on TPE damping

The electronic speed control offers 33, 45 and 78rpm at the touch of a button

The build quality is very good too. The platter is exactingly built and the wood finish of the plinth is pleasing to the eye. A choice of walnut and Eucalyptus finishes are available (the ‘Rosenut’ of the original Classic has been dropped) and both look smart enough. The price of the Evo may have risen to £, but given the raft of improvements it offers to the specification it still looks and feels worth every penny.

There’s a useful element of practicality to it, too. A lid is supplied as standard (although, as with the original, it sounds better without it) and while The Classic Evo is a fairly substantial turntable, it has a perfectly manageable footprint. Quibbles over the anti-skate aside, it is easy to extract from the box and set up and should not prove challenging to anyone with even a modicum of experience of such things.

Connecting The Classic Evo via the supplied interconnect to a Cyrus Phono Signature (HFC 408) demonstrates that the virtues of the original have not been lost in the update. This is still a dead quiet turntable at idle with no sign of hum or unwanted motor noise. The pitch stability is completely rock solid.

These are the fundamental building blocks on which the Pro-Ject bases its performance and very good ones they are too. Beginning with Poppy Ackroyd’s utterly beguiling Resolve, it shows this off to great effect. Chock full of the sustained piano notes that are a torture test for vinyl, The Classic Evo ensures that it never becomes the focus of your attention. The wonderful track Quail – which combines Ackroyd’s piano with Jo Quail’s cello with stunning impetus – is presented with an effortless appreciation of space and scale. That low noise floor ensures that even the quieter passages are packed full of the detail and dynamics that renders the two musicians a believable presence. Meanwhile, when the scale of the music expands, there is no appreciable sense of compression.

Sticking with ephemeral beauty but upping the amount of low-end welly behind it, Goldfrapp’s Silver Eye demonstrates that The Classic Evo has excellent low-end extension. The pounding Systemagic has a bass weight that can be felt as much as heard and great integration with the upper registers. It is here that the Pro-Ject starts to demonstrate a degree of character to its performance. In some cases, ‘character’ is shorthand for ‘flaw’ but not here. Despite the absence of springs, there is a flow to it that is 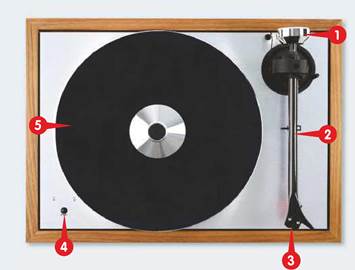 more in keeping with a suspended turntable. It surges through uptempo music with an energy that keeps you listening and engaged rather than being simply a passive observer.

The more intense the music, the more compelling this effect becomes. Hollywood Nights the magnificent opener to Bob Seger’s Stranger In Town is almost visceral in its intensity. Seger’s vocals are the main draw, but they never over power the fantastic drumming from Charlie Allen Martin and the soulful turn from the piano. The performance is evocative without being nostalgic and it is borderline impossible to sit there passively while it happens. You could reasonably

argue that there are more studiedly neutral sounding-devices out there for similar money, but The Classic Evo has fun down to a fine art.

In the absence of the original, it’s hard to make an absolute call on the effect of all the updates, but the revised sub-platter does seem to impart more propulsive force to The Classic Evo and elements of its performance have more in common with larger models, with their very heavy platter arrangements. Compared with them, The Evo then trades off the last ounce of bass weight, but gains an ebullience that the flagship models sometimes lack. The other area where there is a very significant step forward is the tonal realism on offer and this is largely down to the cartridge. The Quintet Red exhibits some traits in common with almost all Ortofon designs. It sits gently but firmly on the brighter side of neutral and though in some circumstances would result in a performance that is edgy, especially with poorer pressings, here those adverse qualities are almost completely avoided. The relationship between arm and cartridge is at a level that rivals many one-brand combinations and, so long as things are setup correctly, it delivers a sparkling performance.

If you give it a really top-quality pressing, in my case the wonderful re-issue of Dead Can Dance’s Spiritchaser, the level of detail and sheer tangibility that The Classic Evo delivers is truly outstanding. Brendan Parry and Lisa Gerrard are a palpable human presence in the room and the little details that make them come to life are something that the Pro-Ject works effortlessly into the mix. This is a very wide production and the turntable manages to capture this width and make sense of it. The rapid panning left and right of certain percussion effects is readily apparent and very well handled.

Trying to wrong foot The Classic Evo is not a simple task. If your listening habits are predominantly small-scale acoustic works, it can sometimes let some of the energy it brings to more forceful pieces to bear here too. Bill Fay’s gorgeous Countless Branches is given a little more energy than it strictly requires to sound right, but there’s a degree of subjectivity to this. Fay’s distinctive, plaintive vocal turn is outstanding, however, and it is effortlessly supported by the small-scale instrumentation. If – as is the case for me – artists like Fay make up a small part of a rather more sprawling selection of styles and genres, it is less likely to be an issue but for specialists this is certainly something to consider.

The Pro-Ject, complete with cartridge comes in at £ less than the Rega Planar 6 (HFC 453) and Ania moving-coil cartridge (although buying the Rega without a cartridge and fitting it with the same Quintet Red closes that gap considerably). In performance terms the Planar 6 has the edge over the Pro-Ject, but it is close. Cumulatively, it makes The Classic Evo look very strong value for money.

Pro-Ject has not traditionally been about over specialising, though. The Classic Evo is the very essence of an all-rounder; a turntable that will deliver a performance that achieves a degree of emotional connection regardless of the style of music. It does this while asking commendably little of you in return. It presents perfectly sensible measurements for a phono stage, seems usefully immune to outside influences affecting the playing surface and the lid ensures that it is usefully dust-free when you come to use it again. It could be argued that the design doesn’t exhibit the same level of flexibility in upgrade terms as some rivals, but given that the package itself is fairly compelling that’s not too much of a concern.

There wasn’t a huge amount wrong with the original iteration of The Classic, but in its Evo form, Pro-Ject has managed to extract more performance from the basic turntable without affecting the things that it already did so well. This is a well-priced, well-made and very handsome record player that delivers a consistently satisfying musical performance with a wide selection of material. Pro-Ject’s ongoing mission to produce a turntable for all seasons continues apace and when the results are this impressive, I don’t see any reason why it should stop now

PROS
CONS
User Rating: Be the first one!
SaveSavedRemoved 0

This first widget will style itself automatically to highlight your favorite product.