On the pace and with plenty of power, Luxman’s PD-151 turntable impresses Noel Keywood. Read our LUXMAN PD-151 Review.

Long ago I owned a fascinating turntable, one that sucked my LPs flat onto the platter. Warps were demolished, the cartridge tracking vinyl vacuumed flat to a metal base. Needless to say, it sounded dif­ferent and – sort of – better. It was a Luxman PD300 vacuum deck. The Luxman PD-151 belt drive turntable I’m reviewing here is remi­niscent, having the same solid build and fine finish – if without vacuum hold down. It’s expensive and there’s plenty of competition – from Technics and Rega for example.

Sucking an LP onto the platter gave a solid, stable sound alright, but 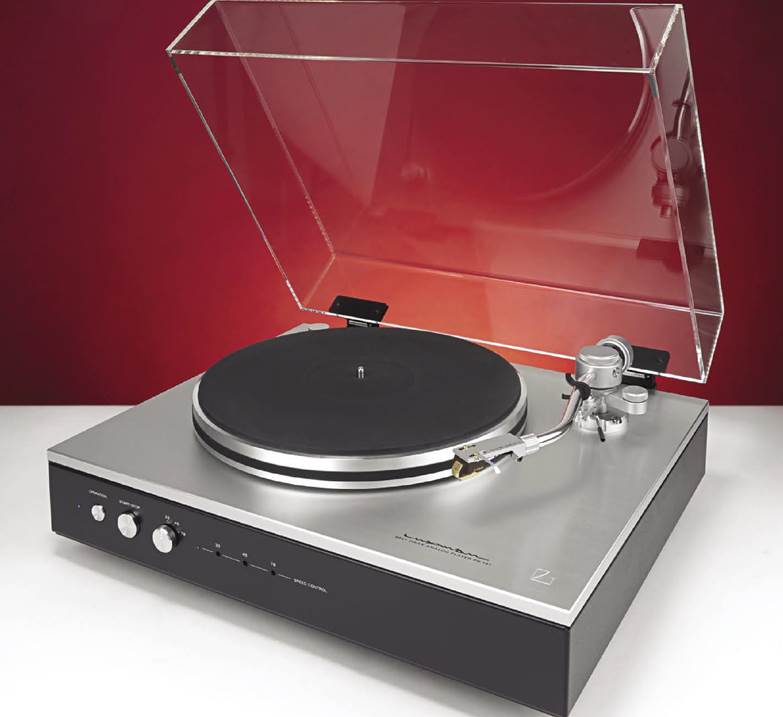 if I played Side A repeatedly, Side B became seriously noisy. Ticks and pops became overwhelming on the vacuumed side. End of this idea. With their new PD-151 Luxman keep to conventional, no vacuum pumps here! Instead the PD-151 rests LPs on a thick rubber mat, sitting atop a very

Luxman’s magnesium alloy removable headshell that uses a standard bayonet connector. It does not come with a cartridge.

This deck uses belt drive to the platter’s rim and because of its weight Luxman provide two handles to lift it onto a large diameter (16mm) stainless steel main bearing shaft. Drive comes from a brushless d.c. servo motor, ‘servo’ meaning it has electronic speed control.

There are three speeds, 33rpm, 45rpm and 78rpm, with adjustment of each available on the front panel. A single small LED indicator lights steady green when speed is correct, flashes green when slow and flashes blue when fast. I’m uncertain why this is necessary – perhaps some users want pitch control to make their own subjective judgement of correct pitch from an LP, or more likely 78rpm shellac disc. Our review sample held a steady green, but it ran a little (+0,5%) fast as delivered all the same – more on this later.

As you can see the PD-151 comes with its own arm. The headshell uses 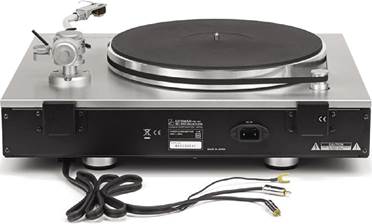 The platter is driven at its rim by a flat ground belt, with exposed motor pulley at rear. The power supply is internal, so no external wall-wart supply here.

a conventional bayonet fixing for easy cartridge changing, necessary if you want to swap into and out of playing 78s, although I cannot help feeling this new design fad isn’t going to affect many people since 78s are fragile, easy to shatter and need a special large diameter stylus.

Luxman’s arm is an S shaped tubular type that looks conventional but under test behaved better than expected (see Measured Performance). There is no auto-mechanism of any sort, such as auto shut off for example, it’s a DIY jobbie where the arm is placed over the LP and lowered by a damped cue platform, being 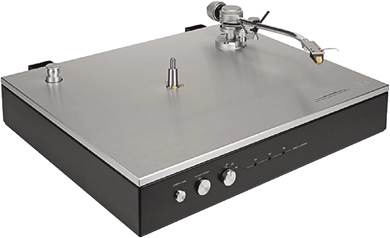 The centre spindle and arm are locked to a massive alloy base plate 10mm thick.

similarly lifted and returned to rest at end of side.

Lux products are beautifully made and finished, this arm working with smooth precision. You get a 4gm-12gm cartridge weight range – more than enough for all cartridges – calibrated counterweight to apply down force, and anti-skating dial that will suit up to 3gm tracking force. Unusually for a fixed arm, this one has height adjustment of 38mm-60mm, a wide range.

The PD- I5I is large, very large. With 10mm machined top plate and sturdy plinth, weight is 15.7kg, so a strong shelf is required. Width is 465mm and depth 393mm but with lid open 440mm. That makes a 16in shelf necessary – deep. The four rubber isolating feet are height adjustable, so the platter can be set level with a spirit level (not supplied). As always, the hinged lid requires top clearance to open, here being 480mm. And best kept on since it is very heavy to prevent sound reaching the arm. The power supply is on-board, not from an external wall-wart, so 230V a.c. only from an IEC mains connector.

I decided to fit an Audio Technica AT- OC9X SH Shibata tipped moving coil (MC) cartridge to the PD-151. It’s a recently introduced modern design, with flat frequency response and great high frequency focus and insight from a well-aligned stylus of sophisticated geometry. Why do I say all this? Because when listening to a turntable the cartridge comes between the two of us, shall I say, so its influence I have to take into account.

Selecting 45rpm, I put on a Mobile Fidelity re-master of Dire Straits ‘Brothers in Arms’ for a bit of classic Rock – and both Walk of Life and Your Favourite Trick slipped by nicely. The first track made obvious that the PD-I5I maintains a solid grip on pace but was eager to get through things. Then I remembered that it was set just a trifle fast and perhaps I was hearing this, although a small 0.5% error is barely detectable. I re-set speed to be exact and it still sounded temporally eager, which was fascinating.

Many hours and LPs later the property had become firmly entrenched in my listening notes: the PD-151 not only has rigid timing but is pacy and clean, with no time domain blur or overhang. Although Mobile Fidelity LPs spin at 45rpm it was when it put on Alison Goldfrap’s 45rpm 12in disco single Ride A White Horse that the sonic picture came into full focus. Cut at very high level this little slab of vinyl is meant to pull the house down – and it did! Luckily, I played it on a quiet Sunday when there was no one else in the building and found myself turning volume right up, the sound was so clean and confidently composed. The sudden change of pace from long into to vocal backing was rifle bolt hard and the lovely Ms Goldfrap started singing about the white horse that Bianca Jagger apparently rode into a NY disco (I’m a mine of useless facts – and also showing my age here!).

The Luxman was so powerful, clean and pacy I started to hear echoes of Garrard 401 and could 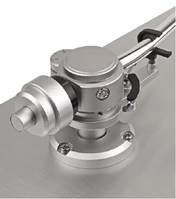 A beautifully finished conventional arm located firmly on the solid base plate.

not help ruminating about what was going on. Massive main bearing – tick. Massive platter – tick. Heavy, rigid base plate supporting that bearing and platter – tick. Good arm able to convey the dynamics that spring from such a heavily built assembly – tick. There was a sense of almost eerie power that I get from my Garrard.

Also, the PD-151 was quiet. Setting the arm down there was little vinyl noise and between tracks it was seemingly silent even with volume right up.

What role did the OC-9X SH cartridge play in all this? It’s a fast sounding cartridge and here its solid alloy body was locked into a stable platform, contributing to the sense of speed and precision I heard, and also dry, tight bass. Our Ortofon Cadenza Bronze delivered greater bass punch than the OC-9X when I bolted it in, plus a little extra space around images, but not the precision treble of the AT’s Shibata stylus.

So, think dynamically powerful and fast paced, clean and punchy. With a broad sound stage and stable images there was little to complain about from the arm, although our Rega and SME arms manage better lower midrange image placement and stability with tracks like Hugh Masekela’s Uptownship from his Hope LP. They put a solid lock on hand drums in particular, something the Luxman arm didn’t quite manage. But then few arms do, because they don’t use the tapered tube of a Rega or SME. The arm got close all the same: it was both dynamically vivid and clean in its sound, as measurement suggested. 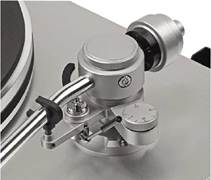 A damped lift/lower system and bias adjustment dial are fitted. The arm rest lacks a lock.

I always got the impression someone was listening at the Lux Corporation. My PD300 vacuum deck was sonically ‘different’ and the PD-151 is also impressive. Strongly paced and with vivid dynamics, it came at me with the peculiar sense you get from a Garrard 401 that you are going to be steamrollered. It has dramatic sound that’s for sure. Totally conventional in outline, you don’t get anything other than solid engineering but it works supremely well to deliver a great sound. 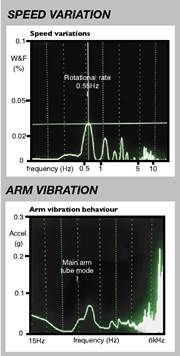 The small variation of speed (3Hz) was impressive for belt drive, where a wander of 15Hz around nominal was possible with a.c. synchronous motors. The PD-151 uses a modern servo-locked d.c. motor and it holds speed very well. As a result wow measured a low 0.08% (DIN unweighted) and 0.05% (DIN weighted), sinking to 0.03% with Japanese JIS weighting. This is close to Direct Drives, showing the PD-151 is very speed stable, due mainly to its heavy platter and large diameter main bearing that suffers less precession than smaller diameter shafts. Our spectrum analysis of wow and flutter components shows low variation at basic rotational rate (33rpm/0.55Hz) with little above this frequency.

For a parallel sided aluminium tube the arm was surprisingly well behaved. Our analysis with a Bruel&Kjaer accelerometer on the headshell shows small activity at 180Hz (main bending mode) with a large peak at second-order (360Hz), but both resonances are well suppressed. The headshell gets lively above 3kHz.

Sound with an iron fist - from a solidly built and beautifully finished turntable.