Ortofon updates its flagship offering of eight years ago to take vinyl performance to a new high. HFC comes along for the ride. Read our Ortofon MC Anna Diamond Review. 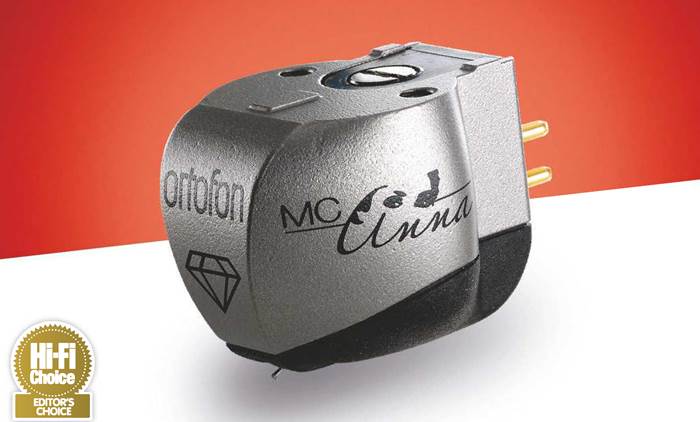 When manufacturers have a product range quite as far reaching as the one that Ortofon offers when it comes to cartridges, they tend to very quickly run out of names. Sure, you can go with colours – I give you 2M Blue 100 (HFC 435) and 2M Black (HFC 434) – musical terms – check out the company’s Rondo, Cadenza and Quintet ranges – or even a combination of the two – MC Quintet Black S (HFC 425) or Quintet Blue (HFC 389) anyone? While such mundane monickers are all very well for the budget end of your output, when it comes to the real cream of the crop you need something a little bit more exciting. Hence the company opting to name its exclusive range after iconic individuals such as composers (the Kontrapunkt Bach series) and former employees – Ortofon MD Erik Rohmann (the MC Rohmann) and engineer Per Windfeld after he departed following 30 years of service (the MC Windfeld). With this in mind, when the company was developing its flagship moving-coil offering eight or so years ago, it was opera diva Anna Netrebko that it turned to for inspiration. Described as a virtuoso whose performance displays a formidable technical arsenal of endless versatility, the comparison seemed perfectly fitting.

Jump forward to 2020 and the MC Anna is back in its Diamond guise and if initial impressions are anything to go by, not a lot has changed. As the name would suggest, the new update ditches the original rigid boron cantilever in favour of an even more rigid diamond rod. Meanwhile, the

Playing a vital role in the performance of any pick-up, the cantilever is a key interlinking suspension component – connecting the stylus at one end with the moving coils at the other – and consequently needs to be as stiff, light and non-resonant as possible. In an ideal world, it would be both infinitely stiff and of vanishingly low mass. In reality, however, this is highly unlikely so the stylus, cantilever and coils not only have a finite inertia, but the rod itself has a series of bending and twisting modes that interfere – or at the very least modulate – the motion of the coils relative to the stylus in the groove. The same types of resonance that appear in tonearm tubes also occur in cantilevers – admittedly, at a much higher frequency. In an attempt to improve the communication between stylus and coils, brands like Technics eschewed hollow alloy cantilevers in favour of titanium and then in the late seventies, boron.

While boron is generally considered to be perfectly adequate in this department, Ortofon notes that diamond’s crystal structure and inherent hardness makes it the natural choice to improve on these areas even more. It’s certainly not a new idea but as the high price tag underlines, it’s a costly one when it comes to manufacturing.

Offering the closest possible match to the angle of the head on a record cutting lathe, the cantilever works in conjunction with the Replicant 100 diamond stylus to provide a supremely long contact area with the groove. Meanwhile, Ortofon’s noted wide-range armature damping system – first witnessed on 1979’s MC 20 Mk II and now a staple of the company’s MC carts – is onhand to control cantilever movement, thanks to a small, heavy platinum disc that’s sandwiched between two rubber absorbers of differing elasticities.

While the likes of Lyra tend to employ a skeletal approach when it comes to the body of the cartridge, Ortofon has instead adopted a Selective Laser melting process (known as direct metal laser sintering) to weld fine particles of titanium together – a single layer at a time – to construct a single-piece

body. The obvious outcome is a structure that is not only strong and stiff, but Ortofon also counts a complete lack of resonance among its positive characteristics.

Completing the picture, the bottom cover assembly is constructed from Thermo-Plastic Elastomer (TPE), claimed to provide additional damping properties. As with the original MC Anna, the diva’s signature and a decal of her eyes are on the side of the body, while a reminder that you’ve splashed out on Ortofon’s most advanced pick-up to date – a small diamond – appears on the front under the company logo.

Weighing in at a sizable 16g, the MC Anna Diamond requires a tonearm with medium-to-high effective mass. It has a quoted compliance of 9cu and is claimed to track optimally at 2.4g. Output is said to be 0.2mV, which is low for a modern moving-coil.

While I can’t profess to be any kind of expert when it comes to operatic divas and their output, if Ms Netrebko is anywhere near as good at warbling as the MC Anna Diamond is with the Michell GyroDec turntable and Rega RB300 tonearm we partner it up with, she must have one hell of a set of lungs. Sure, a £ price tag is not 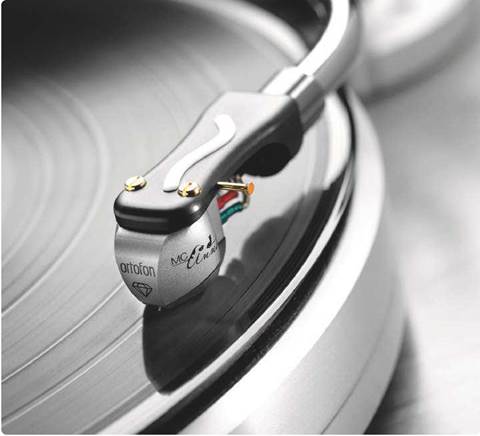 to be sniffed at, but this is one of the very best moving-coil cartridges to pass through HFC in quite some time. In short, it excels at pretty much everything it turns its hand to.

If forced to be super pedantic, we might suggest vinylistas that maintain that analogue sound should be sweet, warm and romantic might want to look elsewhere as the MC Anna Diamond does not attempt to add or subtract when it comes to what’s imprinted in the groove. Instead it simply communicates what’s there with mesmerising imaging capability,

sublime clarity and insight and a supreme sense of the recording’s dynamics. Add to the mix fine detail retrieval the likes of which we’ve never experienced anywhere else, and you’ve got a pick-up that can squeeze out vast amounts of information from even the dullest of recordings.

A criticism that’s frequently levelled at vinyl is that it can sometimes sound rather vague and diffuse in the way that it goes about reproducing the recorded acoustic. The Ortofon shatters this idea, showing just how precisely things can snap into focus when a serious cartridge is employed. 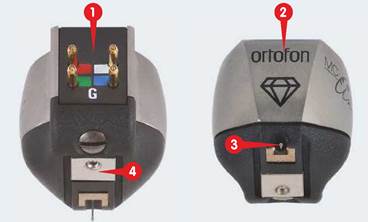 It’s like that moment when the optician swaps out the blurry lenses for your new prescription during your eye test and everything suddenly becomes crystal clear.

An early eighties pressing of Cocteau Twins’ Victorialand perfectly underlines the point. Though Lazy Calm is a delightful example of the band’s swirling, ethereal guitar-based rock, it generally tends to sound rather opaque and fluffy on all but the very best carts. And yet the MC

Anna Diamond picks through every single element of the mix, positioning the different multi-tracked guitars so precisely that they could have their own GPS coordinates. Meanwhile the keyboard that normally gets lost in the sonic mush becomes vast in scale, pushed out far left and right in the soundstage to create an almost cavernous effect.

Moving to something with a bit more get up and go and slipping Buzzcocks’ Harmony In My Mind onto the platter is akin to listening to the original studio master tape. As the stylus locks into the groove and painstakingly traces every tiny modulation, the detail that’s transmitted bellies the age of the recording. No matter how old or slightly soft around the edges a piece of vinyl is, the results are exactly the same every time.

Moving onto dynamics, the MC Anna Diamond reveals explosive ability. The adeptness with which it effortlessly traces the difference between the gently brushed snare – of, for example, Kitty Daisy and

Lewis’ Ain’t Always Better Your Way from the Mick Jones-produced album The Third – and the full ferocity of Keith Moon bashing seven bells out of his kit in Baba Riley from The Who’s Who’s Next, is simply breath taking. Better still its aptitude for seeking out all of the ‘gaps’ in the music is unrivalled. In short, the loud bits go loud and – you guessed it – the quiet bits ebb away into eery inky black silence. The result is that even relatively light, easy-listening

In short, the MC Anna Diamond excels in pretty much every respect material – such as The Bee Gees’ Spirits Having Flown – from the long player of the same name – flows beautifully. Despite the fact that the track has a shuffling, quiet verse that slowly builds to a heavily modulated crescendo in the chorus, the MC Anna Diamond ensures that the verse remains tremendous fun to listen to. Able to gracefully pick apart all of the different strands of the mix, it provides a crystal clear rendition of both the solo vocal that runs through the verse and the big falsetto harmonies, that the

Gibb brothers were so renowned for, in the chorus.

Cerrone’s Supernature late-seventies disco cut is captured with dizzying resolution. So translucent is the midband that it’s possible to focus to the back of the soundstage and pick out the myriad production effects. The arpeggiated keyboard enjoys new levels of clarity and the rich bass synthesiser at the lower end sounds mellifluously liquid. Completing the picture, there’s a delicate filigree quality to the hi-hats that’s in direct contrast to the splashy tizz that lesser MC designs throw up.

Where cost really is no object in the search for the outer limits of LP replay, DS Audio’s DS-W2 ‘optical’ pick-up is in a class of its own. Inside the

cartridge body light from an LED shines on a photocell which generates an electrical current. This output is modulated by the rear of the moving cantilever interrupting the light beam, directly reflecting the passage of the stylus through the analogue groove. It sounds… like nothing else!

As Ortofon’s flagship moving-coil offering, the MC Anna Diamond has plenty to live up to and it’s far from cheap. However, it effortlessly shatters all expectations with a performance that is among the very best that we’ve heard. From its stunning design and impeccable engineering to the way that it drags even the dullest recordings into sharp relief, this is a very special pick-up indeed. Proof if ever it were required that when done properly, vinyl can sound simply heavenly

The pinnacle of what moving-coil has to offer, a stunning - albeit expensive- vinyl solution