The Tractrix curve of the famous Klipschorn delivers benefits in both home cinema and stereo applications, as the punchiness and clarity of the sound from these RP-600 speakers prove. Read our Klipsch RP-600 Review.

Klipsch has been in the loudspeaker business since 1946, when founder Paul Wilbur Klipsch developed his famous ‘Klipschorn’, which took advantage of horn-loading technology to improve both low and high-frequency performance while at the same time using it to increase dispersion and reduce distortion. Horn-loading a loudspeaker can do all this so, not surprisingly, it’s been a part of Klipsch’s technological ‘DNA’ ever since.

On the Klipsch RP-600, horn-loading is used to improve the performance of the company’s proprietary 25mm diameter titanium-diaphragm ‘LTS’ (Linear Suspension Travel) tweeter. The horn geometry is also Klipsch’s own ‘Hybrid Cross-Section Tractrix’. The word ‘Tractrix’ is just a description of the geometry of the horn’s curve: another word for it is an equitangential curve, and this curve shape was first used in a loudspeaker by English engineer Paul Voigt.

The beauty of the Klipsch’s Tractrix horn is that whereas the more commonly used exponential horn shapes have resonances caused by reflections at the mouth of the horn that in turn colour their sound (giving rise to that ‘horn sound’ so detested by audiophiles), the Tractrix horn has almost no resonances, and therefore does not colour the sound. The lack of resonances is due to the fact that the soundwaves are virtually hemispheric as they go through the horn and as they exit it. Like all horn designs, the Tractrix also enables much higher efficiency than would otherwise be possible, as well as much lower distortion (because the driver doesn’t have to work as hard). However, the Tractrix shape has another benefit, which is that its dispersion pattern is perfectly suited to home theatre applications, because both horizontal and vertical dispersion are carefully controlled and identical: something that’s true of no other horn geometry. But although it’s perfectly suited to home theatre applications, it’s equally well-suited for two-channel listening.

The bass/midrange driver in the Klipsch RP-600 is rated at 165mm diameter, but like most manufacturers, this is the diameter of the mounting holes. The moving diameter of the cone is 140mm, the cone diameter is 117mm and the Thiele/Small diameter is 132mm, for an effective cone area (Sd) of 140cm2. The cone is dished and made from a material Klipsch calls ‘cerametallic’. According to Australian distributor QualiFi, this material is made of two layers of ceramic separated by a light metal substrate. The cone is made by first forming the cone shape in aluminium, after which a unique patented process is then used to ‘grow’ a skin of alumina on each side of the aluminium core. The resulting laminate is less dense and less brittle than traditional ceramics, yet at the same time is significantly stiffer than both metallic and non-metallic cones… plus it has the practical advantage that its properties are not affected by humidity or moisture.

Klipsch says an important technical advantage of the cerametallic cone over a standard metal cone is that while metal cone drivers are superior to paper, polypropylene and paper cones across their operating band because they operate as perfect pistons across that band, they have deleterious resonances at higher frequencies. Coating a metal cone with the ceramic material almost doubles the speed of sound through the cone, which in turn moves these resonances much higher in frequency, where they can be effectively ‘removed’ by the crossover network.

Whatever the practical and technical advantages of the cerametallic process, it certainly makes for a beautiful-looking cone, giving it an attractive coppery sheen. The beauty of the cone — and the almost equally good-looking Tractrix horn above it — might tempt you not to use the protective grilles, but we’d recommend you do, about which more in a moment.

The bass reflex port at the rear of the Klipsch RP-600 is very unusual because it, too, is Tractrix horn-loaded, with Klipsch saying that this design allows “the most efficient, fastest air transfer from the cabinet, which reduces port noise for punchier low frequencies.” Below the port are dual speaker terminals, enabling bi-wiring or bi-amping, should you wish. They’re housed on a plate that’s cosmeti­cally similar to the port.

You can order the Klipsch RP-600 in three different finishes: Ebony Vinyl, Walnut Vinyl and Piano Gloss. The Ebony and Walnut models have satin-painted baffles with a scratch-resistant finish, while the premium Piano Gloss cabinet has a seamless finish thanks to being hand-sanded and hand-polished. The piano gloss finish does, however, command a $ premium on the price, bringing the RRP up to $ per pair if you choose this finish.

The ‘RP’ in the model number indicates that the RP-600 is part of Klipsch’s ‘Reference Premiere’ line, which currently comprises no fewer than 16 different models including five floor-standers, four bookshelf models, two bipolar surrounds, and no fewer than five centre-channels, so you can see that the line was designed with home theatre applications in mind.

Klipsch has been an American company since its beginning in 1946, but in 2005 it purchased Danish brand Jamo, and in 2006 it purchased Canadian manufacturer Audio Products International, which sold speakers under the Mirage, Energy and Athena brands. Then in 2011, Klipsch was purchased by Audiovox Corporation (itself owned by Voxx International). Although Klipsch speakers are designed and engineered in Indianapolis, almost all models — including the RP-600 — are manufactured in China.

One interesting thing we noted right at the start of our sessions is that we had to turn our amplifier’s volume control up to almost the usual setting in order to achieve the ‘standard’ sound pressure level we use when reviewing products. This would seem to indicate that although Klipsch states the sensitivity of the RP-600 as being 96dBSPL, it’s actually only a little higher than average… something we confirmed by A-B’ing it against other speakers we had in for review at the time whose efficiencies we knew. So Klipsch is either being overly optimistic about the RP-600’s efficiency. or measuring it a different way than is usual. That said, the Klipsch RP-600 was still more efficient than most other speakers using the same cabinet volume and driver diameter, which means you’ll get maximal performance from your amplifier, and it will always have plenty of power in reserve to ensure realistic dynamics.

The rear-firing port means you will have to play around a little to get the right balance of bass. We found that on stands, around 30cm from the rear wall was the position we liked most. Mounted on a shelf, around 15cm out seemed best. Significantly, the dispersion of the Tractrix horn means you can place the RP-600s on their sides, which is a significant advantage if you are shelf-mounting. It’s presumably because of this mounting option that Klipsch supplies small ‘stick-on’ feet, so you can put them where you want. If you do mount them sideways, you have the choice of putting the Tractrix horns to the ‘inside’ or the ‘outside’. Use the system that gives the best stereo imaging at the listening position.

Properly positioned, but without the speaker grilles fitted, our first session also revealed the sound to be a little forward in the high frequencies. You may like the punchiness this gives to the overall sound, but if you don’t, do what we did and listen with grilles on, which brings it back to a neutral presentation. (It also helps if you don’t angle the speakers to face the listening position, which we’d done initially but quickly undid.)

Prepare to be surprised by how ‘big’ the soundstage is. The RP-600 is a ‘peppy’ speaker with impressive dynamics. Play some James Morrison and you’ll hear what his trumpet sounds like when he’s playing live, with a real ‘bite’ to the sound. Listening to his first album, ‘A Night in Tunisia’, titled for one of his heroes (he later became the first Australian to perform with Gillespie) via the RP-600s was a revelation.

Prepare also for the clarity of the Klipsch RP-600s with vocals. Their delivery of Ali Barter’s waif-like voice on her album ‘Hello I’m Doing My Best’, was superb, replicating the unusual tonal qualities of her voice to perfection. And it’s not only highlighting her vocals that the Klipsch RP-600s do well, they also do an outstanding job delivering the sound of all the instruments on this album. Barter’s husband (Oscar Dawson) was responsible for this album’s sound, and you can hear that she didn’t give him the job just to keep it all in the family.

Bass response — as you’d expect of such small loudspeakers — is not overly extended, but there’s more than enough bass to satisfy, and it’s clean, impressively-solid bass that will respond well for anyone who wants to crank up the volume by remaining tight and tuneful even at elevated levels.

The fit ‘n’ finish of the Klipsch RP-600s is superb — along with the ‘feel’. just run your fingers along the throat of that Tractix horn!—and the sound will speak for itself when you hear it. At this price, you’d be mad not to give them an audition. 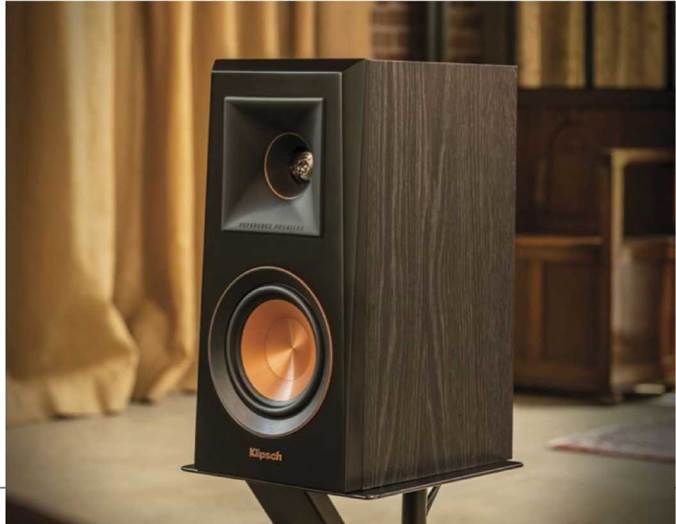