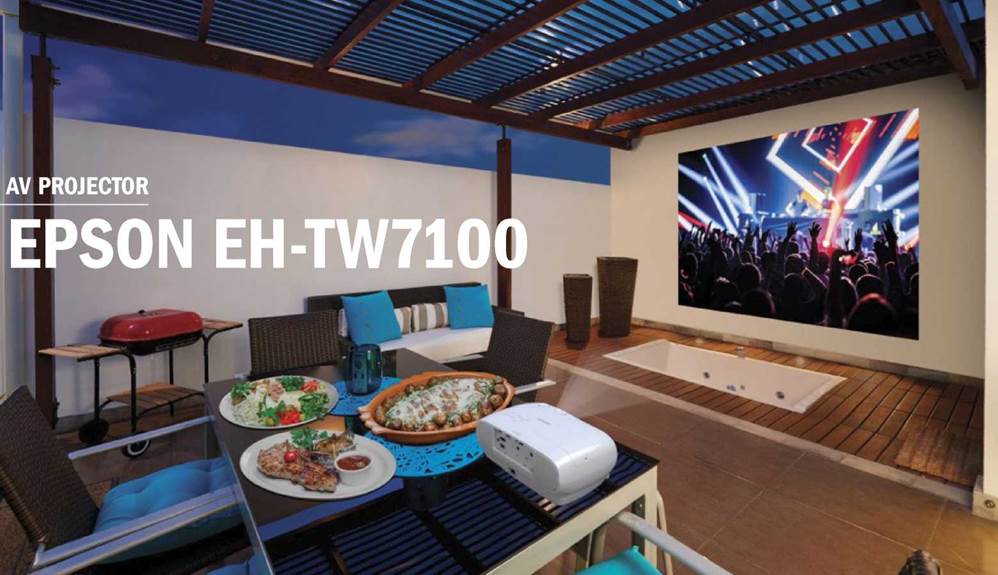 There are such things as native 4K UHD projectors, which have the full 4K’s worth of pixels on a single chip. But these remain expensive, and are often physically large. In the sub-$ AV projector market, pixel-shifting is the way to go if you want to achieve UHD resolution. Which brings us to the new Epson EH-TW7100 with its 4K Pro-UHD feature, complete with a dedicated 4K Pixel-Shift processor.

The Epson EH-TW7100 projector is an attractive and curvy design in white. That means it’s well suited to blending in with most ceilings when mounted thereon, upside-down, though is less suited to darkened dedicated theatre rooms where you’d want everything to be black. So this is more one of those intermediate designs, bringing some features from semi-portable models into the home theatre.

For example, it incorporates a pair of stereo speakers on the rear. Epson says that these are each provided with ten watts, but neglects to mention their size. Peering through the grilles, we’d estimate them at 75mm. Consider these for very casual use only; we always suggest that a big picture deserves at least a medium-sized sound.

For those not going the usual route of an AV receiver, you can use the 3.5mm analogue audio output to feed an external sound system. Or, indeed, the built-in Bluetooth to feed the signal

to external speakers or headphones, bearing in mind the always present possibility of latency (delay) when sending audio via Bluetooth.

But let’s get back to the main game, which is presenting a large, theatre-sized image on a screen. The Epson EH-TW7100 uses three full-HD polysilicon TFT active matrix LCD panels, each 15.5mm wide. It seeks to achieve higher than full-HD resolution by means of pixel shifting. Unlike some other techniques, this one involves shifting only diagonally to two, rather than to four, separate positions per frame.

The front of the projector provides advanced optical control. The zoom range is 1.62:1 and both vertical and horizontal lens shift are provided, allowing distortion-free alignment of the picture with the screen. All the controls are manual. For a 100-inch (2.54-metre) diagonal image, the projector needs to be placed between 2.95 and 4.77 metres from the screen.

Pro tip: UHD Blu-ray discs usually employ 10 or more bits, but only ever 4:2:0 colour resolution, so if your player gives you the option, consider choosing lower colour resolution to allow greater bit depth to come through. This is by no means uncommon with display devices.

There are two USB sockets. One provides power for whatever needs it, such as a Google Chrome device. The other is for use with Epson’s Wi-Fi dongle. It you purchase that extra item, it allows you to mirror stuff from a phone or computer to the projector.

And there is, of course, the aforementioned 3.5mm analogue audio output. That provides a stereo version of whatever sound is delivered to the projector over HDMI.

Installation was straightforward on our ceiling mount, thanks to the two-dimensional lens shift and a good zoom range.

One of the higher-impact improvements in Ultra-HD Blu-ray over standard Blu-ray isn’t so much the difference between 3840 x 2160 pixels compared to 1920 x 1080, but rather the difference between 10 bits compared to 8. Eight bits can describe 256 levels of something. Ten bits can discriminate 1024 levels. Ultra-HD discs with HDR have 10 bits per colour per pixel. Regular Blu-ray has eight bits per colour per pixel.

Now, eight bits per colour per pixel permit 16.7 million colours, which would seem to be more than enough. But if some colour or brightness gradient is of the same colour mix, it isn’t defined by millions of levels; indeed, not even by thousands. It’s defined by those 256 levels. That’s why you sometimes see colour and brightness banding on DVD and Blu-rays, both of which are locked into eight bits.

So, deciding to take the night off from analytical thinking for one evening, and seeing as how this reviewer has started reading the Harry Potter novels for the first time, we indulged in a re-watching of the first movie ‘Harry Potter and the Sorcerer’s/ Philosopher’s Stone’ on Ultra-HD Blu-ray. The opening minutes take place at night on Privet Drive, somewhere in England. The street lights, before Dumbledore steals away their illumination, provide a smoothly graduated white-to-black atmosphere over much of the screen. There were no discernible boundaries.

Would the 8-bit Blu-ray look the same? (And remember, the LCD panels Epson uses in the EH-TW7100 are capable of 10 bits.) Switching discs we expected some hint of visible lines through 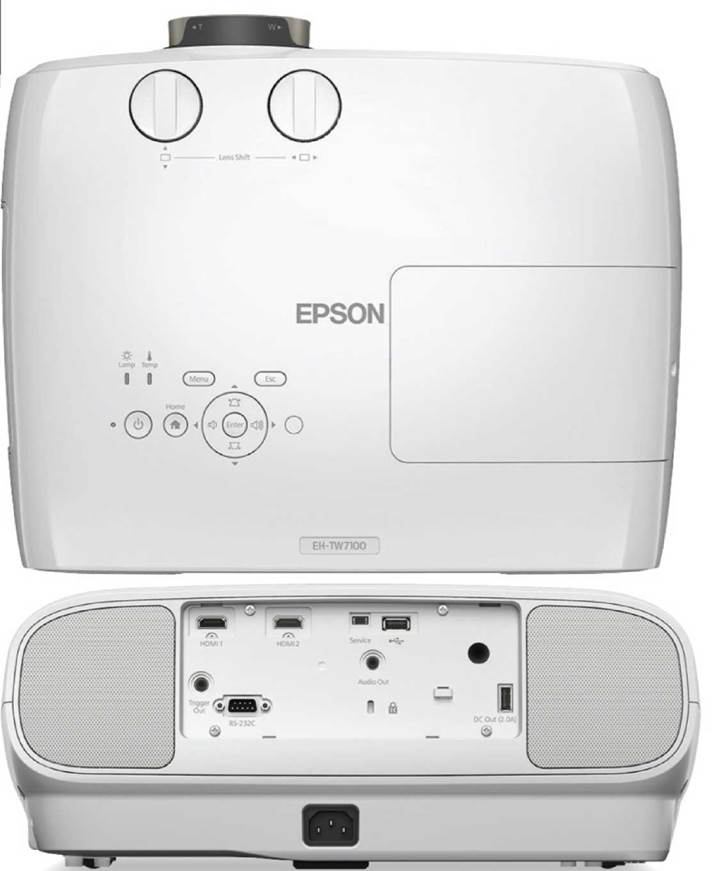 ► Two HDMI inputs are supported by USB slots at the rear, one of which can provide power for a media stick. There are built-in speakers, though we’d recommend a larger sound system.

the gradients. But there weren’t. That’s not to say that there weren’t differences. On the Blu-ray, the blacks seemed to crush together a little more, losing some detail at the low-brightness end of the scale. But the most surprising difference was Professor Dumbledore’s face, even though it mostly occupied only a very small portion of the frame. On the standard Blu-ray it was redder and blotchier. On the UHD Blu-ray, it was smoother and noticeably more natural.

Now let us consider brightness and contrast. Not so long ago a decent home theatre projector brightness was still less than a thousand lumens. This one claims 3000 lumens, both for white and for colour. What does that mean?

Well, here’s one thing. Look at the image above right, a photographic detail of the centre of our standard UHD test pattern. This we use to try to avoid expending a thousand words describing what we saw. A summary of the thousand words shortly.

But check the the saturation of the red, green and blue elements of the picture, the contrast against the white. Pretty good, we thought. But here’s the thing: the screen was under the full glare of two 36W fluorescent tubes just a couple of metres away. Normally we switch them off for this photo, but for this one? It looked too good to redo in the dark.

Don’t get us wrong; never willingly watch a movie on a front projector in a lit room. You must necessarily lose an enormous amount of detail in all dark scenes. But that doesn’t stop us from being impressed. And it reminded us that perhaps five years ago Epson started banging on about how its projectors were as bright in their primary colours as they were in white. We understood Epson’s facts (it’s a result of their 3LCD system as opposed to other projection methods using colour wheels). But here you could really see and accept the effect as real.

Now, back to that resolution. You can inspect that image for yourself. Remember, each bar of colour consists of 12 coloured (or black) lines. The lines are each one pixel high or wide. The ten inner lines are separated from each other by one pixel of white. The outer lines are separated from the inner lines by two pixels of white. That’s not what we see here. We see separation of the outer bars, which is resolvable at 1080p. The ten inner bars are represented by a crosshatch. Something more than 1080p is going on, but not actual UHD.

This projector has a kind of trade-off between processing options and power. For example, it can do frame interpolation motion smoothing on 1080p and lesser content, but not on Ultra HD. If you switch on 4K enhancement for those lesser resolutions, you no longer have the motion smoothing capability.

But in fact the motion smoothing with 1080p/24 was… well, something we’d avoid. It has three levels: Low, Medium and High. Low didn’t seem to do anything with our usual Blu-ray test clip. Medium did a superb job of smoothing the judder during the Chicago flyover at the start of Chapter 21 of ‘The Fugitive’. And when Harrison Ford walks in front of a steel girder shortly thereafter, with no heat-haze around him, Epson looked to have it nailed. But a moment later he’s on a pay-phone (1993, remember) in front of another girder with prominent rivets. That girder is holding rails for a train. The train passes from left to right and the rivets jump around, confused about where they’re supposed to be. Motion smoothing is probably best left off.

Epson projectors used to have both auto and forced deinterlacing settings. They seem to have abandoned the force-film option. So if you feed this projector an interlaced signal, you can choose from ‘Off’, ‘Video’ or ‘Video/Film’. That last auto system was fairly mediocre. On our standard test clips, it accidentally chose, way too often, video when film would be appropriate. It often flickered between the 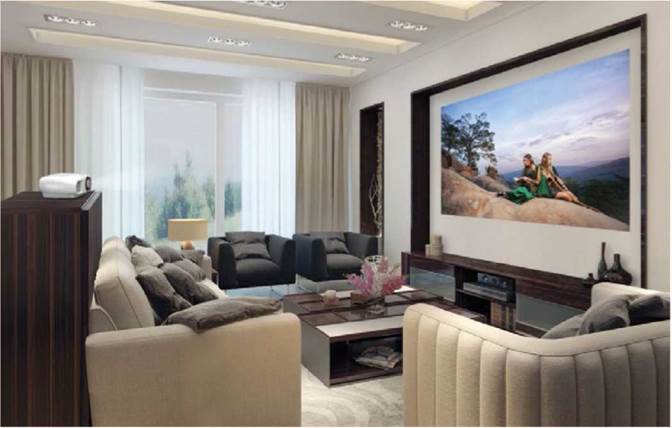 two modes very quickly. The waistcoat worn by Manuel the valet in the DVD version of ‘Gigi’ frequently tricked the projector into video mode, resulting in nasty moire patterns jumping in and out of existence.

Likewise, on 1080i/50 clips from ‘Miss Potter’, the hard stuff was wrongly treated as video when it was film, but even the scrolling credits at the end, which are generally well-handled these days, were also wrongly treated as video sourced, leading to the cross strokes on little characters chittering into and out of existence during their travels upwards across the screen.

Solution? Convert to progressive scan earlier in the chain, if your source allows, and does better. At least experiment with your other devices.

We wanted to get that out of the way because of something that was astonishing, first noticed it on that ‘Gigi’ clip, and then on others. Feed this projector with 576p material, and it does such a good job on upscaling to the projector’s resolution that it almost looks like the source material is full-HD. When Manuel’s waistcoat wasn’t flickering, it was detailed and clean and sharp. Likewise for other PAL DVDs.

And at the other extreme, the very best quality UHD Blu-ray content is superbly rendered, and particularly ‘Billy Lynn’s Long Halftime Walk’, which is held on the disc and delivered by this projector at 60 frames per second. Despite any 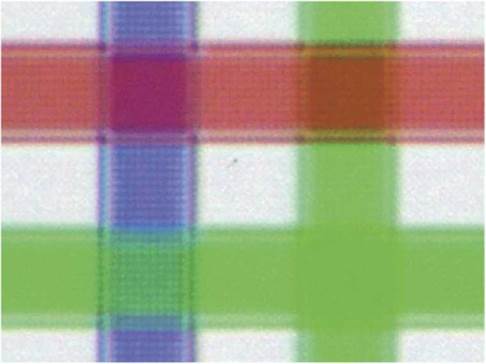 reservations about true UHD delivery by this projector — and we have noted in the past that the resolution advantage of UHD isn’t all that obvious even on displays that can clearly resolve it — ‘Billy Lynn’ looked glorious. The higher frame rate tends to deliver a subjective boost in sharpness.

As usual, the UHD resolution delivered by Epson’s pixel-shifting of lower-resolution panels remain unconvincing. But in terms of the overall inage quality, deinterlacing aside, this is an excellent home theatre projector at a sensible price.

Brightness: 3000 lumens (both white and colour)