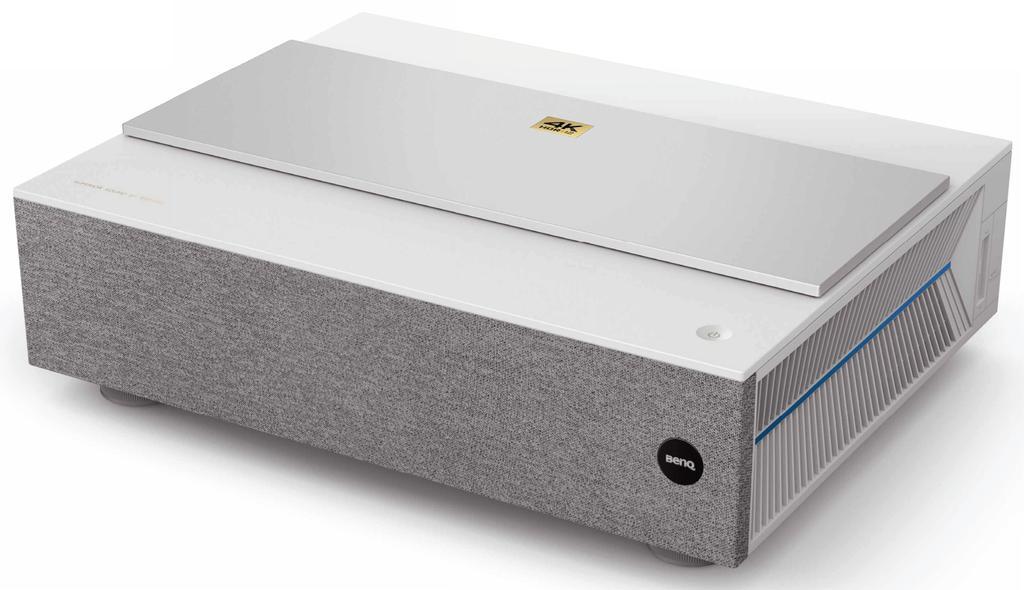 The BenQ V6050 comes in an elegant black casing, while the possibly more living room-friendly white version is called the V6000. There is no difference in technology. In the front, under the fabric cover, two speakers provide good sound, which is miles superior to the internal audio systems of most TVs.

There are two HDMI inputs on the back (facing the screen), a digital audio output, and the obligatory RS232 jack for controlling screens, curtains, or other peripherals. The two USB sockets on the side are intended for external media. The BenQ V6050 makes a statement regarding ease of use and quality as soon as it is switched on: a metal cover quietly whirs open to reveal the mirror optics. It protects the optics from dust and other mischiefs when the projector is off. As soon as humans or animals get a bit too close to the opening, the laser also switches off automatically, so it doesn’t hurt the eye. The remote control also has a highquality build and a generous button layout. 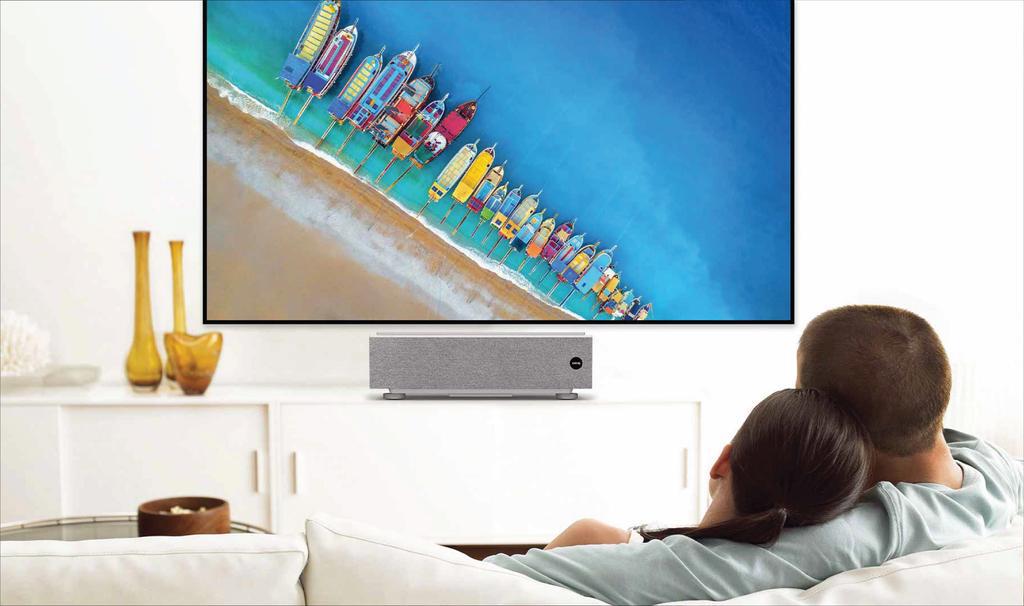 To achieve an image diagonal of about two and a half meters, which corresponds to a 100-inch TV screen, the distance between the V6050 (or rather its optics) and the screen is only about 63 centimeters. Like all ultra-shortthrow projectors, the BenQ should be perfectly aligned in front of the screen – if it’s out of place by just a few millime ters, it will directly affect the image geometry severely. To prevent the problem, there are two extendable rails on the side facing the screen. In addition, the V6050 can be leveled using adjustable screw feet, which makes the work of the final keystone correction easier; only fine-tuning is required here.

The sound to the picture

As mentioned, sound plays a more important role with the V6050 than with most large-screen TVs. Few know that BenQ also has some expertise in audio. 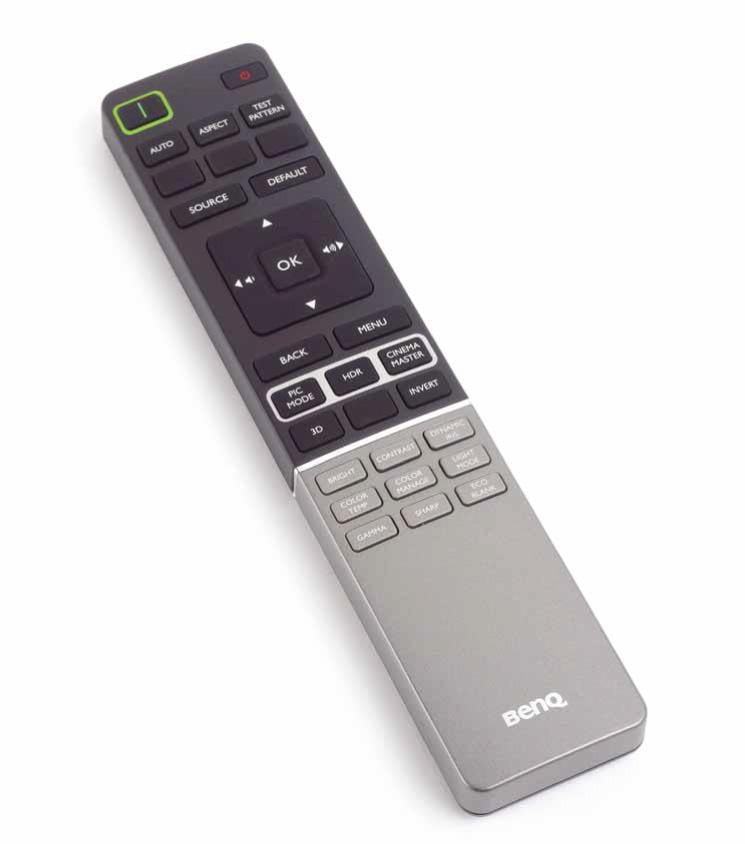 The fact that this expertise comes to bear in the V6050 is not only evident from the Trevolo logo on the casing, but especially from the sound. You can also adjust the sound individually in the menu. This can either be done using the five presets Standard, Cinema, Music, Gaming, and Sport, or with the help of the 5-band equalizer, which is available in the user preset. Either way, the speakers‘ potential in the V6050 is enough to fill a medium-sized living room with sound.

If you want more, you can use the digital output to control an external sound system, which can be anything from a proper soundbar to a full-blown receiver. 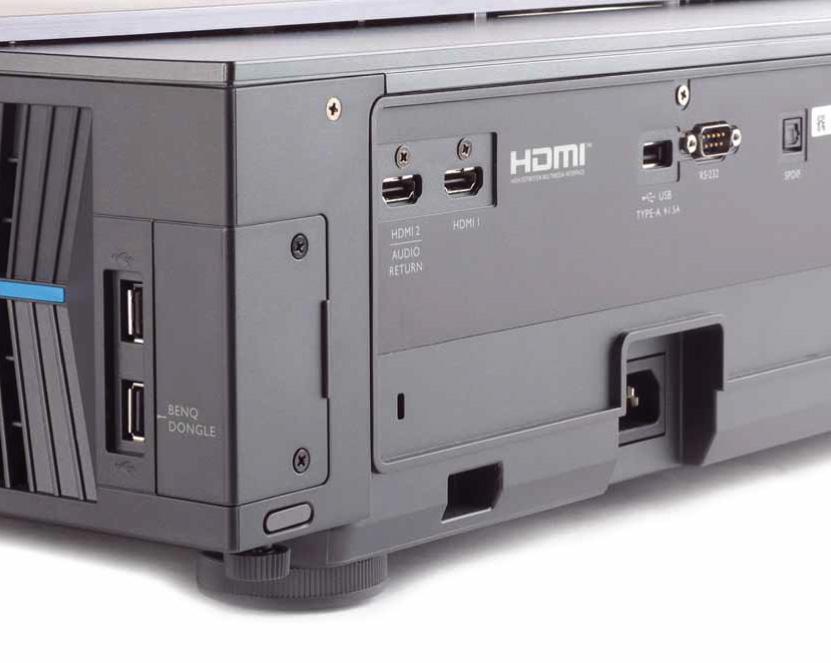 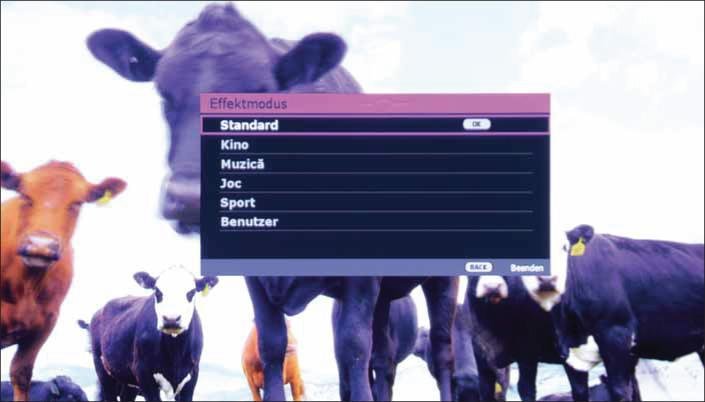 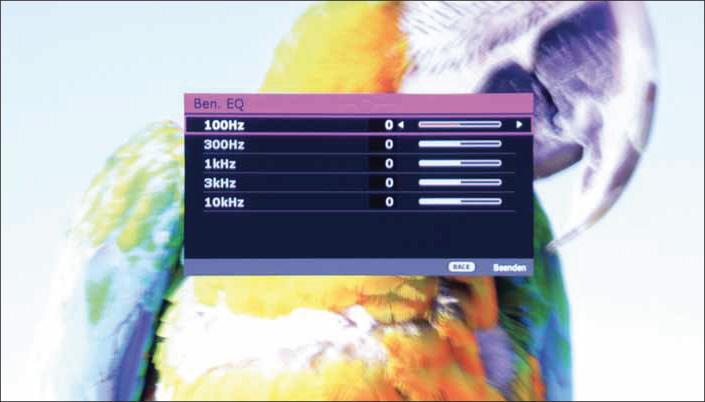 Once the V6050 is correctly aligned, only the picture needs to be adjusted in contrast and color fidelity. In our test device, the picture mode was set to „living room,“ and the laser was in bright standard mode. The picture looks correspondingly bright and cool, but the measurement still shows a good overlap of the HDTV standard color space. Even though a color temperature of around 7,000 Kelvin is okay in a typical living room, we are more in the mood for a cinema-like movie experience. For this, we set the picture mode to „Cinema REC.709“, the HDTV standard color space REC.709 is already defined here. Now we just put the laser to Eco mode and the color temperature towards „Warm.“ A measured 6,000 Kelvin and a 100% coverage of the standard color space prove us correct. With a rich 1,600 lumens in Eco mode, the projector conjures a brilliant picture on the screen, even in a bright living room. 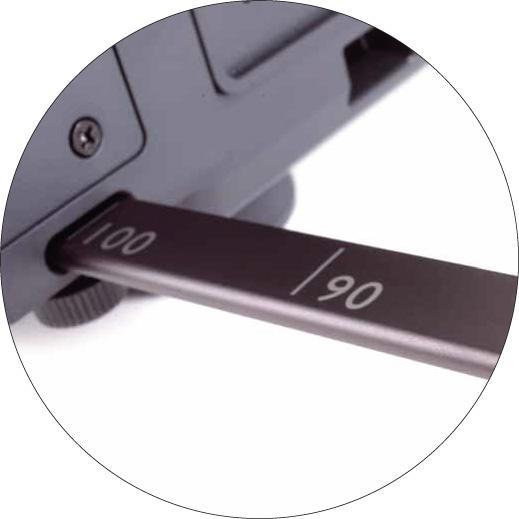 When fed with HDR signals, the V6050 automatically sets the corresponding picture mode „HDR10“. The gamma value is fixed here, and we can now turn on the „Large Color Space“ setting in the menu. Our measurement shows that the extended D65 P3 color space is completely covered. The gamma values follow the prescribed PQ curve as closely as possible. In the end, this ensures an increased contrast range, just as required for an HDR production. 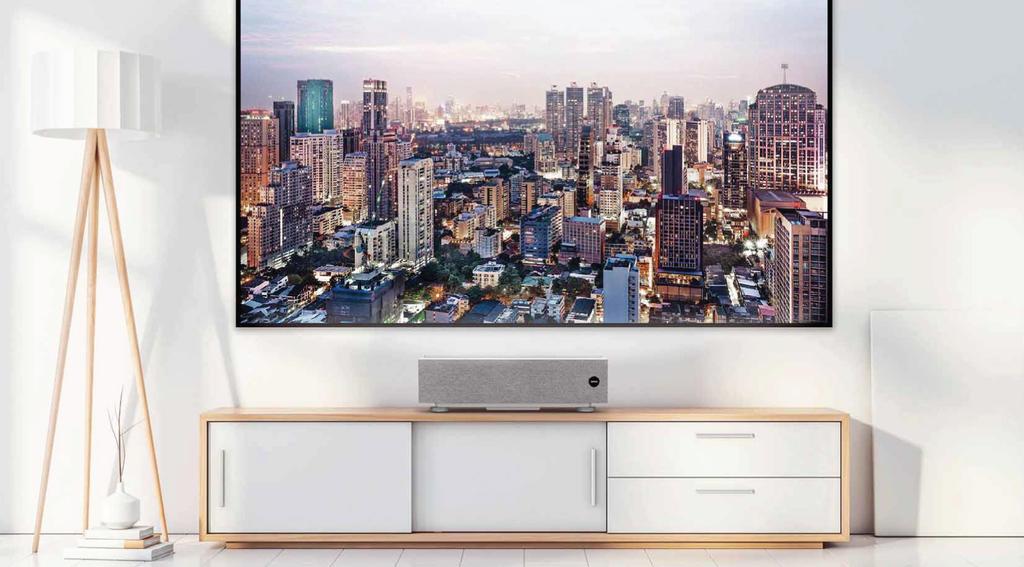 With the V6050, BenQ has brought a very special ultra-short distance projector to the market. The laser light source’s high luminous efficiency and color fidelity make it a genuine alternative to the big TV. Unlike these, it can also score with authentic soundbar sound. 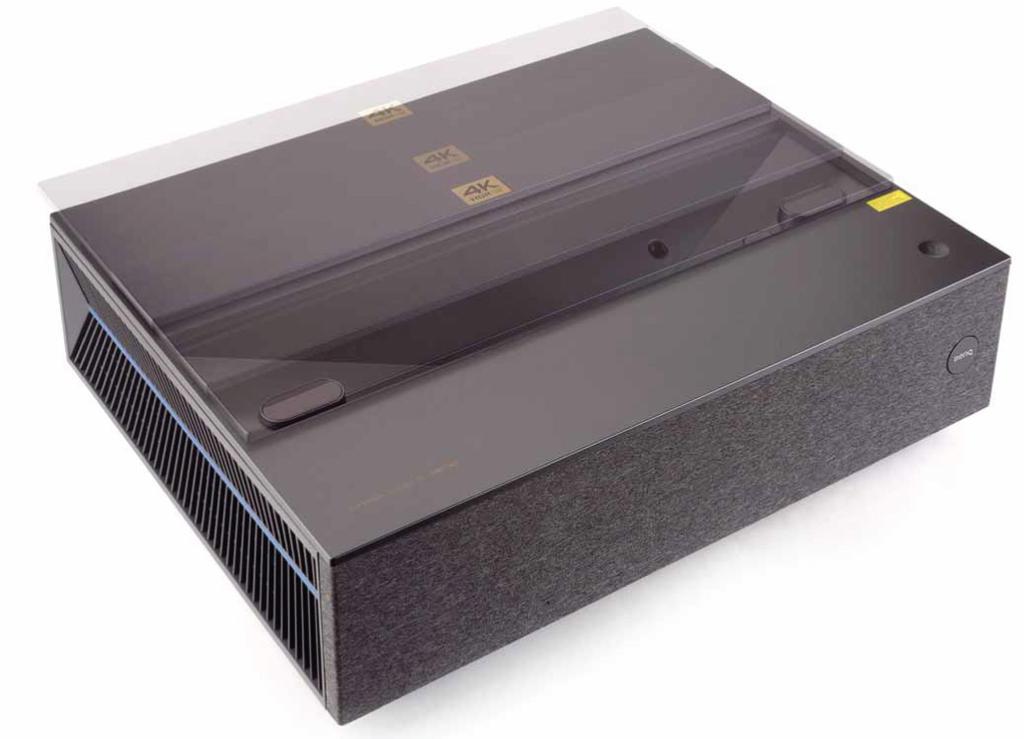 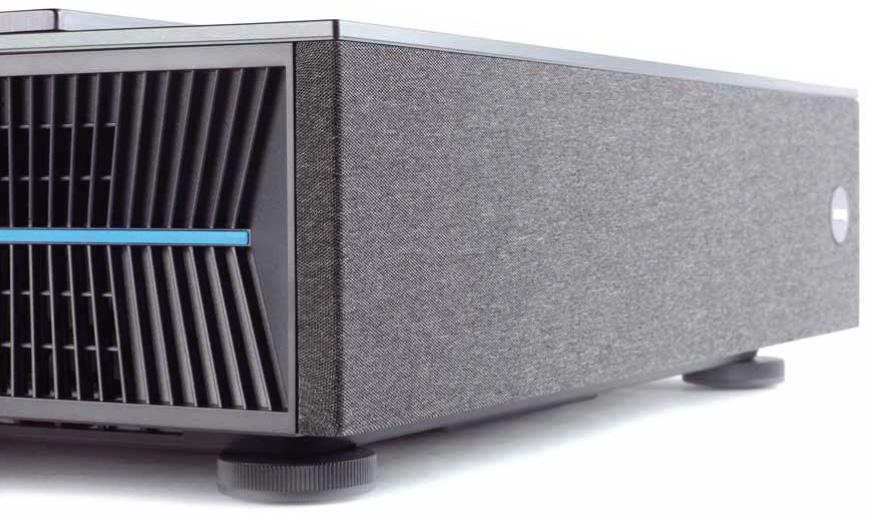 The BenQ is delivered in „living room“ picture mode, the color temperature is set to „cool,“ and the laser is set to the bright, normal position. As expected, the color temperature is slightly above the desired 6,500 Kelvin, which is quite common in the living room A. The HDTV standard color space is mainly covered; the white value tends towards blue B. The color deviations are relatively high overall C. The gamma curve corresponds to a straight line, which speaks for a low definition in very bright and very dark parts of the picture D.

The BenQ has a picture mode with the descriptive name „Cinema REC.709“, which is also supposed to cover the standard color space REC.709. After an initial visual inspection, we set the laser to Eco mode and the color temperature to „warm.“ It is now 6,000 Kelvin across all brightness levels A. The HDTV standard color space is now almost perfectly covered; only magenta tends towards blue at 100% saturation; below that, everything is fine B. The color deviations are now much smaller C. The gamma value now reaches a satisfying 2.1 and follows the prescribed curvature D as far as possible.

If you feed the V6050 with an HDR signal, the corresponding picture mode „HDR10“ is automatically set. The gamma value is also selected automatically. We left the color temperature at „normal,“ and we can now turn on the „Large Color Space“ setting in the menu. By this, BenQ means the D65 P3 color space. The color temperature of just over 7,100 Kelvin is similar to the „living room“ setting A. The extended D65-P3 color space is completely covered, but cyan and magenta move towards blue with increasing saturation B. The color deviations have increased strongly again C. The gamma values follow the prescribed PQ curve D quite well.

Lumen (according to manufacturer) 3000

Price Replacement lamp does not apply 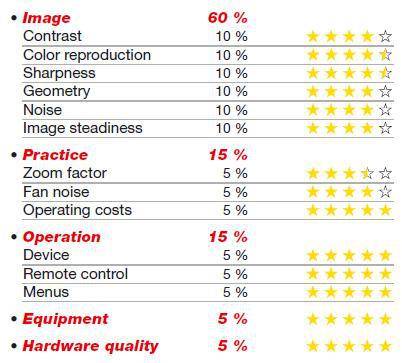 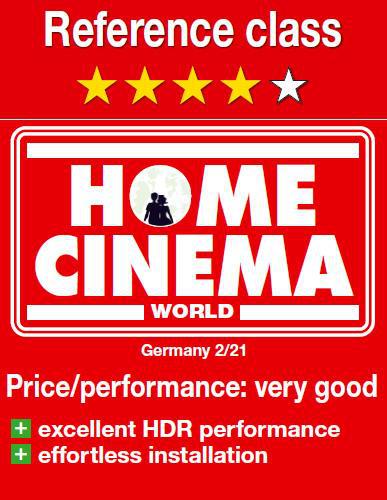