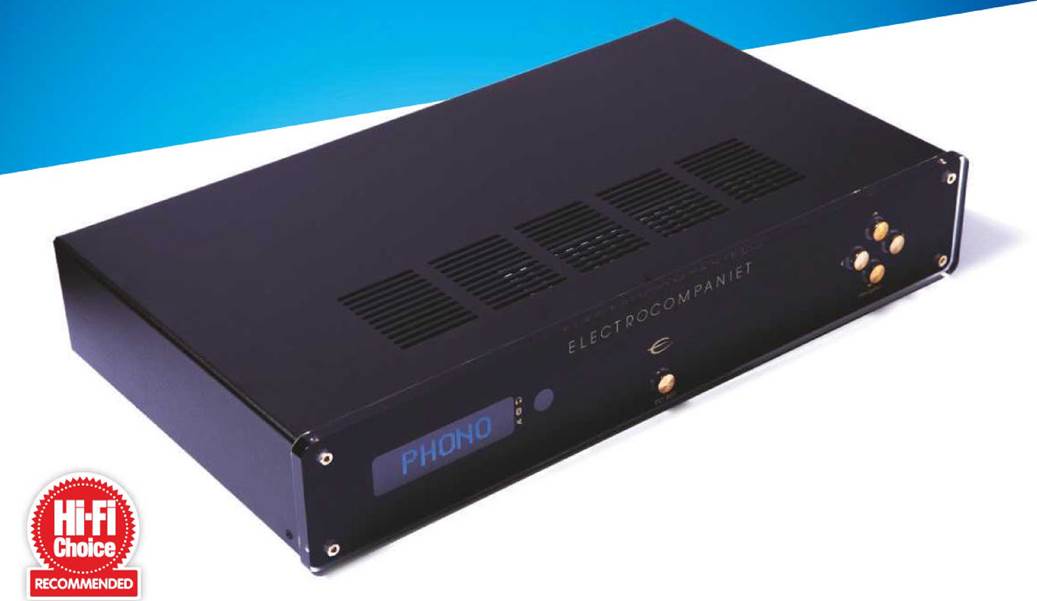 Is it possible to get hooked on a look? Absolutely.

And, as you might expect, Scandi designers have the knack of tempting us with eye appeal alone. Take integrated amplifiers. Whether it’s Hegel’s stone-cold sober industrial functionalism or the surgically clean lab chic favoured by Primare and Copland, they’re all riffing on a less-is-more theme – spare, cool and tasteful.

But it’s remarkable what subtly tweaked proportions and a sprinkle of bling can do to raise the aesthetic ante. Proof? Norwegian high-end practitioner Electrocompaniet has been stealing the scene for nearly five decades, its fusion of black, gold and a billboard-sized logo serving as an iconic visual constant through a history encompassing massive initial critical acclaim, a reputation for top-drawer sonics bolstered by a thumbs-up from Michael Jackson’s studio engineers, an arguably risky shift of emphasis towards multi-room lifestyle speakers and, latterly, a return to its purist roots as evinced by its current core lineup of ‘Classic Line’ amps, CD players and streamers.

Smitten audiophiles, perhaps hitherto put off by the lofty price tags, will be interested in the company’s new entry-level integrated, the ECI 80D. It sits comfortably outside the budget sector but the promise of a genuine high-end EC

goodness, including on-board DAC, in a slimmed down and less expensively pitched package is certainly enticing and hot competition for Scandi rivals Hegel’s H190, Primare’s I25 Prisma (HFC 461) and Copland’s CSA 100 (HFC 465).

Quantitatively, the headline specs are more or less par for the course – 80 Class A/B Watts per channel into 8ohm (2x 150W into 4ohm) – but Electrocompaniet has chosen to forego the full wi-fi network support you’d get with the Hegel and Primare for basic Bluetooth aptX HD streaming from iOS, Android and PC. On the other hand, it incorporates a high-quality MM phono stage and headphone amp, much like the Copland, but with both 3.5mm and 6.35mm jacks located on the rear.

Digital inputs run to a pair of coaxial and three optical. These are joined by two RCA line-level inputs and, if you want to use the ECI 80D purely as a preamp, there’s also an RCA pre-out pair. Disappointingly, the sole USB socket is a service port and not for hooking up a laptop. While we’re on the niggles, the supplied remote isn’t up to much and I have to squeeze the button battery cover to get any of its basic functions to work. Whether it’s a ploy to get you up close and personal with the amplifier’s quartet of rather gorgeous gold navigation/volume buttons on the right-hand portion of the fascia or a means to allocate more of the development budget to the electronics I wouldn’t like to speculate, but it is a disconnect with the quality and style of the rest of the amp.

That said, the ECI 80D is properly, seductively handsome, its slim profile accentuated by the fact that it’s 36mm wider than the full-width separates norm. Far from bulky, it’s almost half the depth of Primare’s I25 Prisma. It’s hard to single out the most distinctive aspect of the look, but the 10mm-thick acrylic panel that covers the facia has to be a contender, likewise the large, super-legible, fluorescent blue-over- black graphics of the display on the left – which show volume level and, where selected, the sampling rate of an incoming digital signal. Judging by the photos, it looks just as special with the recently introduced optional white finish. The white variation carries a £ surcharge; that comes with silver buttons as standard, gold available on request.

Whereas many audiophile savvy manufacturers source their off-the- shelf Delta Sigma DAC chips from ESS, AKM or Cirrus Logic, the ECI 80D gets the somewhat less trendy PCM1789 from Texas Instruments – good for up to 24-bit/192kHz, but not the heady multiples toted by the aforementioned alternatives. Fear not, says Electrocompaniet’s Sales Director, Lasse Danielsen, what really matters is the implementation and analogue circuitry – a familiar refrain we’ve no quarrel with.

When Electrocompaniet hit the scene in the early seventies, its mission was to show that a transistor-based amplifier could not only match the warmth and naturalness of the best valve designs but also better them for tonal accuracy. The company believes its brand of Class A/B amplification is a timely foil for the increasing number of Class D designs, offering a warmer and more refined balance.

The one asset you can’t measure with hi-fi is likeability, yet it’s obvious listening to Dream from Shawn Mendes’ Wonder on CD, that the ECI 80D has it in spades using its own on-board DAC. If it isn’t conspicuously 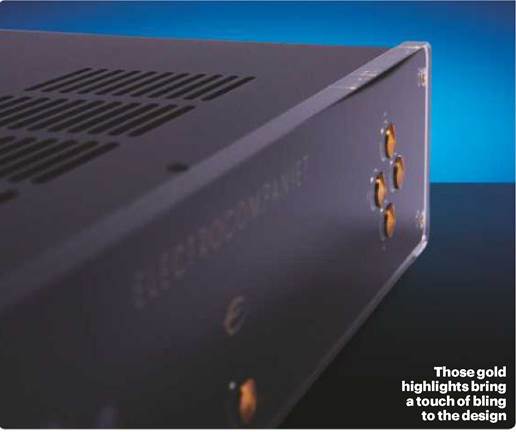 fast or especially grippy, you’re barely aware without reference to the Hegel and Primare, both of which exhibit a strong temporal character. But the EC is tonally and harmonically richer as well as sounding deliciously fluid and supple, and such things tend to connect just as easily and powerfully with all kinds of music. The densely layered and slickly produced Mendes cut is delivered with detail deftly integrated into the larger musical picture rather than acutely analysed

and an elusive sense of body and inner texture – tellingly apparent in the vocal – that leaner and more agile sounding amps often diminish. Perhaps predictably, routing in the Hugo 2 for decoding duties sharpens up timing and micro-dynamic acuity but the easy comfort and colour still remain intact.

Pitting the ECI 80D against the Hegel H120 (both amps’ internal DACs engaged) folds down to the EC sounding equally muscular and dynamic but rosier and more romantic and the Hegel marginally cleaner, tighter and more athletic. The Primare is a different animal again, further ramping up the energy, articulation, insight and control – especially in the bass – but with an altogether cooler and drier tonal balance that is nonetheless capable of greater discrimination and contrasts. Both the Hegel and the Primare can sound more urgent and exciting in extremis.

In the end, though, the EC has a certain ease and low fatigue livability on its side that gets under the skin. Teamed with the potently expressive but un-finnicky JBLs, there’s airy soundstage expanse and an easy-going generosity to the sound that gifts the charged live ambience of The Clark Sisters’ soulful gospel (Blessed And Highly- Favoured from Live – One Last Time, streamed from Tidal) huge presence and tingle factor without ever lapsing into ragged excess.

Including Bluetooth, a phono stage and headphone output that, again, seamlessly dovetail with the cosy tonal temperature of the amp, the ECI 80D presents a very particular, but coherently resolved idea of solid-state amplification to the world that should win it many friends

Not an amp to float everyone's boat, but if you get it little else will do

I’ve already touched on how the ECI 80D squares up to its Scandinavian rivals from Hegel and Primare, and the good news is that between them there’s a wide choice. Though, arguably, none quite nails the ‘perfect all-rounder’ brief. If style and a spacious, sonorous sonic demeanour are high on your list of priorities, the Electrocompaniet more or less chooses itself.