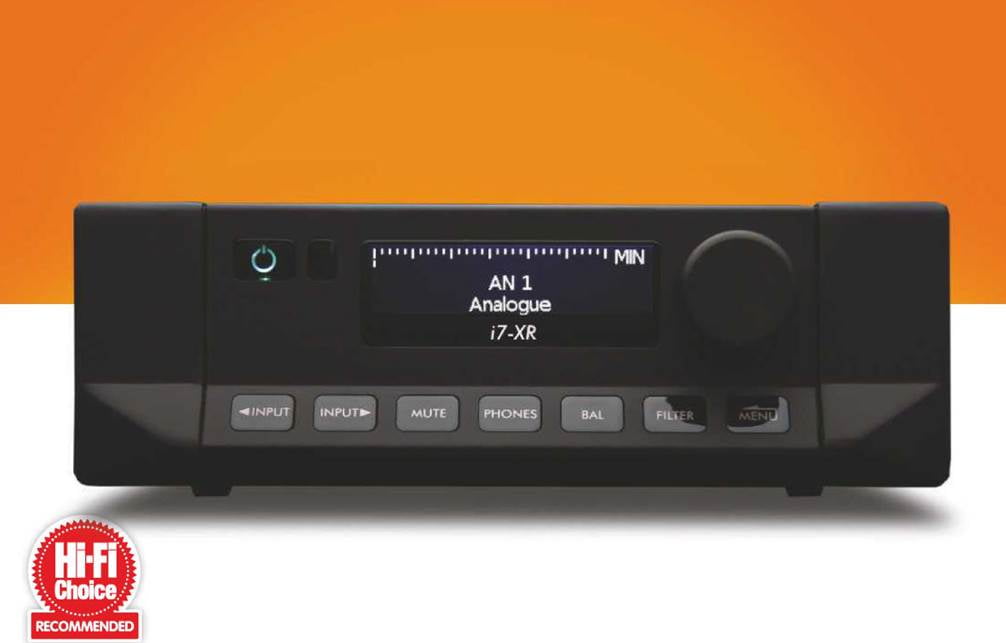 In recent years, the bulk of activity from Cyrus has been directed at the ONE series of amplifiers, but with every new permutation it has shifted its attention back to its higher echelon products. The XR Series is a complete new range designed to complement the existing 6 and 8 components. Cyrus is making considerable play of the fact that its engineers have been allowed to select designs and components they want without having to work to a budget. The new models – which Cyrus describes as a ‘first wave’, suggesting more are due – includes a CD player and transport, preamp, external PSU and two integrated amplifiers – the smaller of which is the i7-XR seen here. The specification of the i7-XR is entirely in keeping with what you

might expect from an integrated amplifier in 2021. Four analogue RCA inputs are partnered with a moving­magnet phono stage and there is also a digital board with two optical, two coaxial and a USB input. Cyrus has long been adept at packing a surprising number of inputs into a small space, so the choice of connections here is not that much of a surprise. What is worthy of note is the level of performance on offer.

Take the digital board. This is the second generation of the QXR DAC platform, able to handle sample rates up to 32-bit/768kHz and DSD512 via the USB input and, while Cyrus states that the coaxial connections top out at 192kHz, my tests suggest they are perfectly capable of handling 384kHz. Even with the recent surge in digital capability, this is still state of the art. You can also adjust the filters for the first time on a Cyrus product with seven different options available.

The amplifier section is also technically impressive. Cyrus describes the response as: “ruler flat” for 100kHz and there are no aberrant changes to the phase or other unwanted behaviour anywhere else in the audible frequency range. The amp is Class A/B rather than the Class D the company has used with some success in its ONE series. Power is quoted at 52W into 6ohm, but Cyrus says the real-world performance feels burlier than the numbers, thanks to an over specified power supply section.

The preamp is also improved, with relay switching and an enhanced gain stage. As well as the four analogue inputs, the phono stage is a new design compared with previous internal units. Cyrus says it takes thinking and technology from the Phono Signature (HFC 408), which remains an absolutely barn-storming phono stage and augers well for good performance.

What Cyrus has managed to do with the exterior of the i7-XR is arguably as impressive as the work that’s been done under the lid. The metalwork is materially identical to the older amplifiers, but thanks to some clever tweaks it feels much more modern. The first is that the i7-XR is finished in a ‘phantom’ black that is a good deal darker and more contemporary than before. This has been combined with a new display and touch controls that cumulatively help it feel bang up to date while retaining the company’s identity. The interface is good, too. The controls are responsive and the display easy to read. Combined with the good remote control handset, this is a very pleasant amp to use.

Of course, it is still a Cyrus. The headphone socket on the rear panel is going to be entirely decorative for many owners depending on how the amp is placed. The speaker terminals now accept 4mm plugs, but still need to be hollow ones in order to work – which may mean that purchase of an i7-XR also requires you to budget for a cable change.

Cyrus’ claim that the i7-XR will feel more powerful in use than the 52W output might suggest is borne out during listening. Connected to PMC’s twenty5.23i, a speaker that isn’t a tremendously challenging load but benefits from being well driven, the amp never feels strained and there seems to be plenty in reserve even at healthy listening levels.

Initially using the i7-XR via the USB connection from a Roon Nucleus+ (HFC 439), the integration between the digital and analogue sections is exceptional and the presentation is an enticing balance between liveliness and warmth. A 16/44.1 FLAC of Martha Tilston’s Nomad almost flows from the speakers. Tilston rarely needs help sounding anything other than magnificent, but the Cyrus does a good job of capturing the ephemeral edge to her voice. It would wrong to say it sounds warm, but it never seems to struggle to reveal any warmth from a recording.

It does this without losing the ability to deliver an edge when called for, though. The ballistic live finale from Wild Beasts’ Last Night All My Dreams 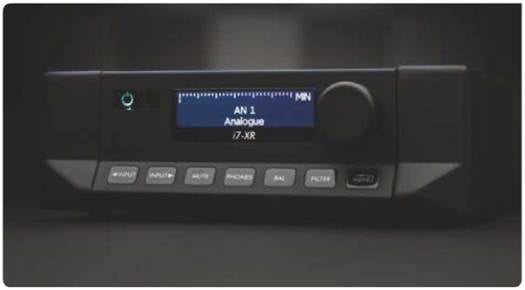 Came True is rendered with all of its controlled fury intact. The delivery of the two live vocalists is brilliant. Their interplay and supporting instrumentation is effortless and helps to recreate the essence of the live performance. What also helps is that both the bass extension and levels of detail and control are superb. There are amplifiers at similar money that

can use the PMC to hit harder, but the dexterity the Cyrus possesses is an acceptable by-product of very slightly pulling punches.

On a hunch, I change the PMC out for the slightly more ruthless Focal Kanta No1 (HFC 454) and it demonstrates not only that the Cyrus is civilised enough at the top end, but that some of the effortlessness that’s there with the PMC disappears as the more demanding Focal finds some of the limitations of the amp’s performance. Confirmation that the QXR digital board is rather good comes when I swap in a Chord Qutest (HFC 436) into one of the analogue inputs. The Chord has an edge over the board, but it’s a points victory rather than a knockout, suggesting Cyrus’ effort has paid off.

The work that’s been done on the phono stage is no less impressive. Connected to an AVID Ingenium Twin (HFC 379) with Rega RB330 and Goldring 2500 Cartridge (HFC 434), there is a significant amount of gain available but never at the expense of unwanted noise – which remains low to the point of non-existence even with levels up high. By the time you reach the price point that the i7-XR pitches into, you can reasonably argue that moving-coil support is an option but the performance on offer here is extremely good.

‘Extremely good’ is a fairly neat shorthand summary of the i7-XR in general. What Cyrus has done here is very impressive because this is still unquestionably a Cyrus amp. It looks like one, feels like one, has the features we associate with the company and keeps that usefully compact form factor. Importantly, though, it does all these things better than before. If this is what happens when the engineers are let off the leash, I look forward to seeing what they come up with next

The Cyrus weighs in at roughly the same price as Naim’s Nait XS 3 (HFC 459). The Naim is fractionally more powerful and sounds fabulous, but the refinements to the Cyrus have closed the gap. It’s hard to ignore how much more the i7-XR is capable of doing for the same amount of money, though. Cyrus has clearly been paying attention to what the competition has been up to and this new amplifier looks ready to challenge the best in the field.

£299.95
Added to wishlistRemoved from wishlist 0

Exposure 3510 Review: Back tracking to the future