You know a particular model has been successful for a company when it introduces a ‘Signature’ version, so we expected great things of B&W’s 702 Signature. And we weren’t disappointed. Read our B&W 705 Signature Review.

The most obvious difference between the ‘ordinary’ 702 S2 floorstander from Bowers & Wilkins and this newly released ‘Signature’ edition is the cabinet, which features a new veneer for the company, exclusive to these new 700 Series Signature models. But it wouldn’t really be a true ‘Signature’ model if B&W’s engineers hadn’t also improved the sound quality over the standard model. Given the success of the unadulterated original, what performance have the UK engineers managed to achieve from the Signature?

Bowers & Wilkins says that it has achieved the sonic improvements by upgrading the crossover network with higher-quality components, including bypass capacitors sourced from Mundorf. They also signifi­cantly increased the voltage rating of the low-pass section’s bipolar capacitor.

The new Signature veneer, meanwhile, is Datuk Gloss, an ebony-coloured wood created by specialist Italian wood company Alpi that not only looks fantastic, with no two models sharing the same grain pattern or figuring, but which is also guaranteed to be sustainably-sourced. Bowers & Wilkins then improves on Alpi’s achievement by adding nine clear finish coats, including multiple lacquers, to add a deep, lustrous appearance to what was already a superb finish.

Two further cosmetic changes that are quite minor, but at the same time quite obvious, are that B&W’s unique ‘tweeter on 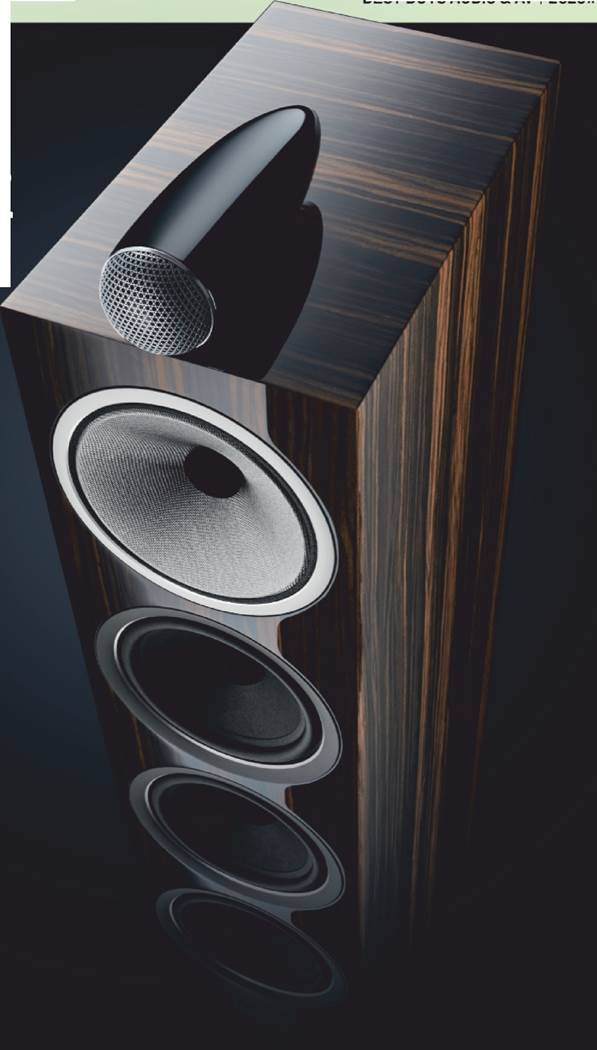 top’, which we’ll talk about later, now has a silver grille rather than the previous black, while the equally unique FST midrange driver now features a bright metallic trim ring.

The 702 Signature’s tweeter is mounted at the front of a jet-engine-like black-painted aluminium housing which, although it weighs a kilogram and is completely rigid and totally non-resonant, is nonetheless isolated from the cabinet beneath it by a flexible mounting.

B&W started positioning its tweeters like this way back in 1977, when John Bowers and his research team discovered that the frequency response errors and phase irregularities produced when a tweeter was mounted on a baffle disappeared when it was instead mounted in its own enclosure located separately from the main cabinet.

The 25mm dome diaphragm contained at the front of the housing has what B&W calls a ‘carbon’ dome and a unique construction whereby the front portion of the dome is formed from a 30-micron-thick sheet of aluminium onto which an ultra-thin carbon coating is applied by vapour deposition. This is attached to an inner section of carbon 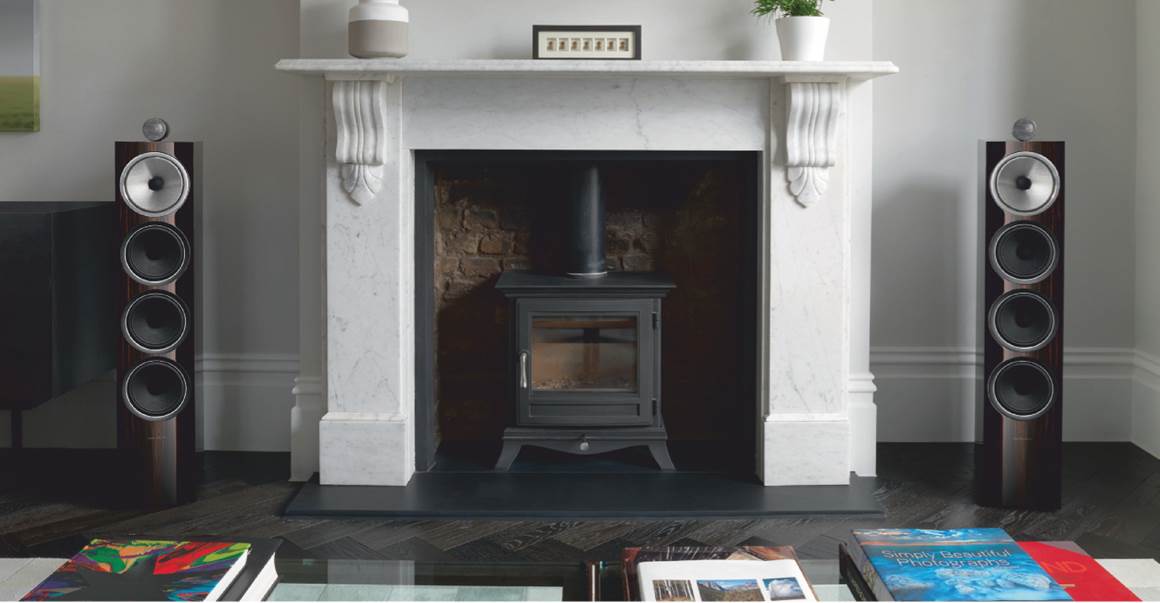 material that’s 300-microns thick and profiled to match the curve of the main dome. This construction means that the dome’s first break-up mode is up at 47kHz. B&W says this level of performance lies midway between that of the aluminium double-dome used in its 600 Series speakers and the diamond domes used in its top-line 800 Series.

As for that ‘unique’ FST midrange driver, it is truly unique because, unlike all other coned midrange drivers, it does not have a flexible suspension, hence B&W’s description of it as a ‘Fixed Suspension Transducer.’ Instead of connecting to a flexible ring of rubber or foam that moves up and down in sync with the cone, the cone is instead terminated by a very narrow polymer ring that stretches and contracts to accommodate the cone’s movement. B&W says this improves transient response and, because the foam ring does not reflect energy back across the cone surface

The new Signature veneer, is Datuk Gloss, an ebony­coloured wood created by specialist Italian wood company Alpi that not only looks fantastic but is also sustainably-sourced… in the same manner as a roll surround, also reduces dynamic distortion. The FST’s cone is made from a woven composite fabric B&W calls ‘Continuum’.

As with the 702 S2 on which the ‘Signature’ model is based, the FST driver has a tuned mass damper (TMD) — cleverly disguised as a ‘trim ring’ — around the periphery of the chassis where it meets the front baffle. And despite this appearing to be solidly mounted to the front baffle, the 702 Signature’s FST is isolated from it by isolastic mounting hardware, so cabinet vibrations cannot affect its performance.

The 165mm diameter cones of the three bass drivers on the 702 Signature use a triple-layer ‘sandwich’ technique which B&W originally developed for its 800 Series. Two outer layers enclose an inner layer, with the outer layers on the cones of the 702 Signature’s drivers being made from paper and the inner layer from expanded polystyrene (EPS). The company says that the multi-layer construction technique avoids the abrupt transition from pistonic to break-up mode behaviour that usually impairs the openness and neutrality of conventional drive units.

The 702 Signature’s bass reflex port is located on the rear baffle. Although the port tubing is made from a smooth-surfaced material, the flared exit is made from a dimpled polypropylene material that minimises turbulence as the air exits (and enters!) the port. B&W calls this port design ‘Flowport’. Below the Flowport is the speaker terminal plate which has four large, multi-way terminals to allow bi-amping or bi-wiring. If you don’t do either, you’d leave the flat bus-bar connecting plates in place under the terminals.

Although it’s a ‘Signature’ model, B&W has tastefully not included an actual signature (regrettably, neither John Bowers nor Roy Wilkins is with us anymore). Instead, on the rear panel there’s a discreet ‘platinum’ metal badge with the lettering ‘702 Signature’ and ‘Bowers & Wilkins’ printed below it. Nice.

Tall, heavy speakers with fairly narrow cabinet dimensions have a relatively high centre of gravity, which would make them tip relatively fairly easy had not B&W supplied a very substantial base-plate which can be attached to the speakers before installation.

The rear-firing port means that the speakers’ bass response will be affected by the cabinets’ proximity to the rear walls, but it will also be affected if you elect to install the foam port plugs that B&W supplies, which are two-stage types so you can block off the port completely, half-block it or, of course, not use the plugs at all. B&W’s Owner’s Manual has a good description plus three very good (and very accurate) graphs showing the effects these configurations will have on the bass response.

We found that no matter where we positioned the speakers in relation to the rear wall, or what port configuration we used, the bass response from the B&W 702 Signature was impressively extended, so that with music, it obviously stretched right down to the lowest note on a piano (27Hz), while with movie sound effects, it went even lower. It also went loud! We were able to achieve room­shaking levels when playing Bach’s Toccata and Fugue in D Minor.

The bass tonality was also wonderful, with beautifully rich-sounding ‘Ds’ at the bottom of the runs and resonating chordal sound at the conclusion of the arpeggios.

The rich bottom-end sound of the B&W 702 Signature also worked wonderfully well for all musical genres. Kick drum sound was full-fledged and meaty, double-bass and electric bass sounds were rendered rich and full, with nice detailing.

Bass response was perfectly matched to the midrange response, so that the two combined to present a gloriously full sound-stage extending right across the space between the left and right speakers. Listen 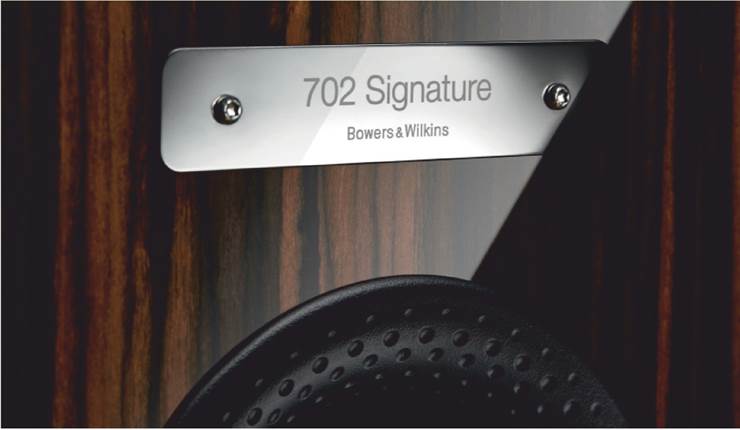 to Claudia Tellini sing her multi-tracked interpretation of Roger Waters’ classic Pink Floyd hit Money (from Stazioni Sonore’s ‘Who’s Got Its Own’), which has everything from solo vocal to speech to scat as well as ‘harmony’, and you will appreciate how B&W’s FST delivers the sound of her voice to perfection, as well as being able to admire the perfection of her articulation and pitching.

We’re huge fans of getting tweeters away from front baffles, indeed away from anything that could possibly affect the motion of their domes — and thus their sound quality — but the sweet, pure and uncoloured treble sound we heard from the B&W 702 Signatures wasn’t just down to the fact that the tweeter here is physically isolated and radiates its sound without any interference from the main front baffle: it’s also down to that new carbon-dome tweeter.

A great way to test the ability of any tweeter is to play the title track of Norah Jones’ ‘Day Breaks’ where the tweeter has to handle simultaneously cymbals, violin, pedal steel guitar and Hammond B-3 organ along with the harmonics of the soprano sax… it can get very busy, and if the tweeter is not up to the task it will sound congested and mushy. The B&W 702 Signature’s carbon-dome tweeter handled all these sounds in its stride, while still maintaining that sense of ‘air’ around the highs that only the finest tweeters can manage. The resolving power allowed us to hear each sound in its own acoustic, with the tonalities of the individual instruments separated from each other. If you listen, make sure you pay attention to the sound of the harmonics of the higher notes of Jones’ piano on the following track (Peace) as well as the higher harmonics of Wayne Shorter’s soprano sax.

The best thing about Bowers & Wilkins’ 702 Signatures is that everything you play through them will sound great, because they make music sound richer, more musical, more exciting: in a way, almost larger than life, yet at the same time not, because they also deliver true-to-life sound, albeit without monitor-like accuracy. As to whether you think it’s worth paying the premium over the B&W 702 S2 to gain the improvement in sound quality, the exclusivity of the Datuk Gloss finish and the cachet of owning a ‘Signature’, that will be a matter between you and your wallet.

£329.00
Added to wishlistRemoved from wishlist 0