There’s a certain amount of extra-curricular activity that can come with using a valve amp. As with their fellow stalwarts of hi-fi – turntables – valve amps present opportunities for setup, tweaking, and maintenance, and for some that’s part of the appeal. Balanced Audio Technology’s new VK-80i integrated, however, is intended to be ‘plug-and-play’, and provide a user experience more in line with its own solid-state models than some hot bottle contemporaries. All the thrills of the tube sound without the fuss? Where do I sign?

The VK-80i is also out to deliver the ‘sound’ of a pure triode amp without the low power breathlessness. So, in place of classic 300B triodes, the quartet here are ‘signature’ 6C33C-B tubes – also used in its reference REX 3 power amplifier – set in a push-pull configuration.

This Delaware-based company, now in its 25th year of manufacturing fully balanced amps, rates the VK-80i at 55W/8ohm, albeit with distortion of 3% THD at full throttle [see PM’s Lab Report, p57]. By way of contrast, the higher-spec REX 3 promises 2x80W or 160W in bridged mono mode. Of course, that range-topping amp also totes a £ asking price and doesn’t provide the system-streamlining features of its integrated cousin.

CHIP OFF THE BLOCK

The VK-80i doesn’t quite have the muscular looks of the REX 3, as it’s a ‘mere’ 41cm deep, as opposed to 60cm, and less than half as heavy, but shares much of its design language. The amplifier’s main chassis is pleasingly slim, and manages to pull off the trick of making it look easier to accommodate than it actually is. With output triodes in place, plus the four 6SN7s used in the line/preamp stage, the height approaches 20cm.

Behind the row of 6C33C-Bs sit two circular transformer modules that take the shine off the amp’s otherwise elegant styling. And with no protective cage for the hot-running tubes (idle power consumption is 470W), you’ll want to ensure children and pets are kept well away. This amp is very much a case of look, but don’t touch, and one that demands breathing space.

Fitting the valves is an easy process and setting up speakers and sources is straightforward too – for the latter, choose from the VK-80i’s single balanced XLR input, or trio of unbalanced RCAs. One wrinkle, however, is the amplifier’s unusual configuration of speaker binding posts – there are dual sets, with labelling denoting which should be used with notionally ‘High’, ‘Med’, and ‘Low’ speaker impedances [see PM’s boxout, p55]. 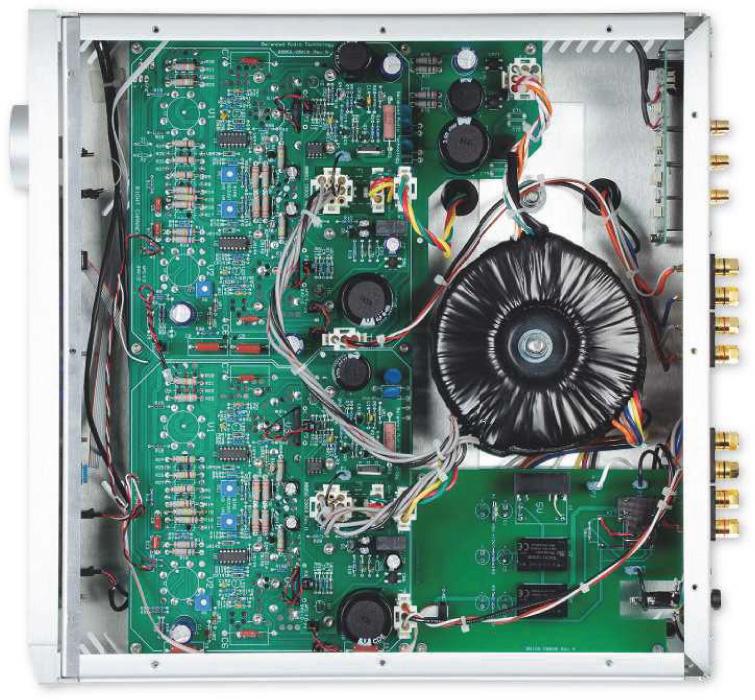 As the presence of multiple speaker outputs doesn’t exactly scream plug-and-play, it’s up to two features of the VK-80i to emphasise its accommodating nature. The first is its ‘intelligent autobias circuit’, which removes the need to manually set tube bias. The second is what BAT calls its ‘fuseless design’ technology, where thermal and electronic protection circuits replace all but the main breaker fuse demanded by regulation.

The thermal protection, says BAT’s founder/chief engineer Victor Khomenko, removes the chance of ‘over-stressing’ the unit. ‘Since our amplifiers don’t clip in an obvious, unpleasant way… people sometimes run them into their red zone, without realising it. The thermal protection guards against this.’ Meanwhile, output tube current is continuously monitored and the channel disabled above a prescribed limit. Khomenko believes this protection circuit, while avoiding the need to replace blown fuses, is also ‘sonically transparent’. 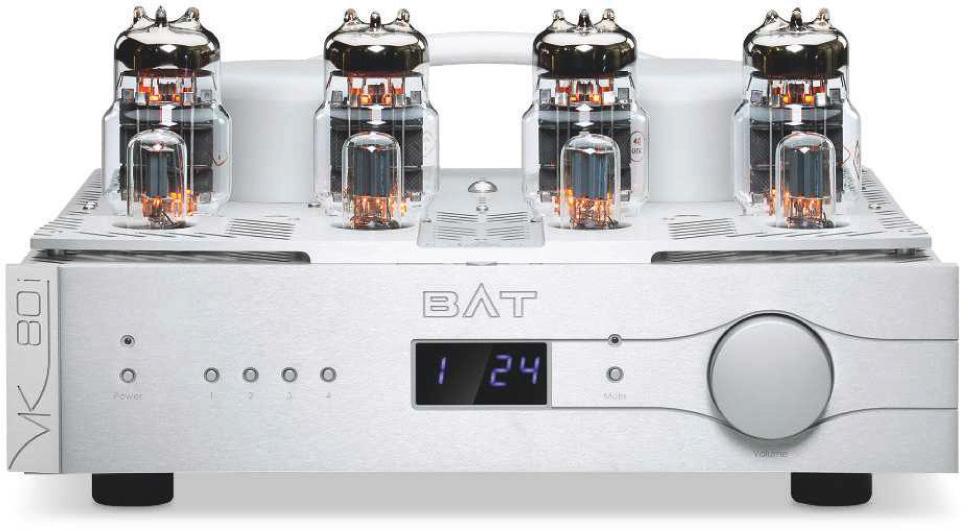 The simplicity of the VK-80i’s preamp section is reflected on its front panel. The small display window signifies input and volume, the former by number (there’s no option to rename sources here), and adjacent to this are small buttons for input selection, plus the amp’s resistor-ladder volume dial. The supplied all-metal handset is similarly light on functionality [see pic, p57], but therefore easy to get to grips with. Use it for source selection, volume, mute and fade, and adjusting the brightness of the amp’s display.

Once its tubes are glowing the VK-80i puts on quite the show, but it took me a while to fully appreciate its talents. This isn’t an amplifier with an obvious, deliberate tone or voicing. As with the company’s earlier £ VK-3500 hybrid amp [HFN Sep ’21], there’s no sense of artificial warmth here. Nor is there an extravagant bass. What the VK-80i does, instead, is pepper you with details, often so subtly that at first you don’t realise. It’s articulate and revealing without shouting about it, super-smooth when needed, grippy and controlled when push comes to shove. It’s an exhilarating listen, although not a monster amp, so partnering speakers should be chosen with care.

With David Gilmour’s ‘A Boat Lies Waiting’ [Rattle That Lock, Columbia; 96kHz/24-bit], the VK-80i almost delivered more delicacy than my ears could process. The piano sounded resonant and natural, while the track’s background ‘seaside’ effects were conveyed with a gossamer touch. The multi-tracked vocal then seemed to just ooze from my speakers, phrases arriving and departing with astonishing fluidity. It’s an attribute that’s quite hard to effectively describe. Musical? Naturalistic? Intimate? Take your pick.

Where there’s space in the soundstage, and real fidelity, the VK-80i is in its element. Tony Bennett and Lady Gaga’s ‘Cheek To Cheek’ duet [eponymous, Streamline Records/Columbia; 96kHz/24-bit] emphasised their vocal talents – Bennett’s tenor was rich and slightly heavy, Lady Gaga’s higher registers enjoyed a smooth edge, and both sat forward from the muted, jazz nightclub piano accompaniment. Meanwhile, with Mexican acoustic guitar duo Rodrigo and Gabriela’s cover of Metallica’s ‘The Struggle Within’ [The Metallica Blacklist, Blackened BLCKND050], the VK-80i’s resolution proved immaculate, delineating every picked string and patted guitar body and having the speed to keep pace with the fretboard wizardry. The ambient soundstaging was sublime also, with a deep, bassy solidity to the kick drums that gave them scale, while the string instruments snapped into tight focus across the stereo spread. 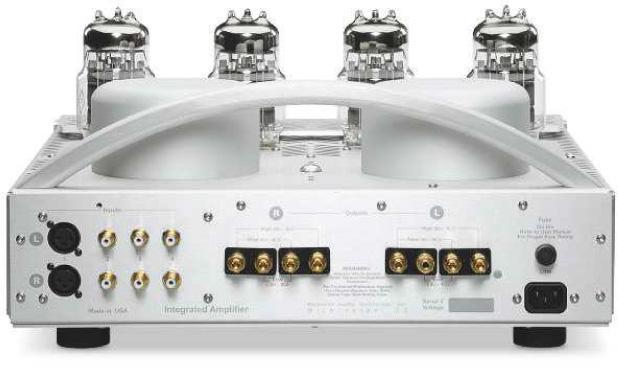 The more I listened to the VK-80i the more I loved it, although my sessions weren’t without moments where track and amp didn’t see eye-to-eye. ‘The Parchment’, from Iron Maiden’s recent Senjutsu release [Parlophone 0190295015947], began promisingly, the VK-80i hammering out the song’s relentless drum patterns and sounding sweet as honey with the synthesisers, but the closing quarter of this 12-min prog epic could have done with more dynamic attack.

So, is this amp a no-go if you like to rock out? Not necessarily. Budgie’s rapid-paced 1973 track ‘Breadfan’ [Never Turn Your Back On A Friend, Noteworthy Productions NP4] was delivered with jagged guitar textures and a brilliant sense of timing, while ‘Odna’ [Slovo, Napalm Records NPR 371], from Russian folk metal outfit Arkona, benefitted from the VK-80i’s superb control and nuance.

This is a composition of deliberate contrasts, ranging from repeated bagpipe refrains to crunching, distorted guitars and guttural roars, and while the VK-80i seemed more comfortable with the woodwind elements, there was no denying that its midrange heft and clarity worked wonders with the more chaotic moments, and helped disentangle music from mayhem.

Where the VK-80i does give way to other amplifiers is, not surprisingly, in terms of power. It still keeps bass in check and has reasonable grunt, but where you might want puppyish energy you get something a little more reserved. I found it fared better with Monitor Audio’s sensitive Silver 500 7G floorstanders [HFN Oct ’21] than my regular B&W 705 S2 standmounts. However, neither sounded underfed with Michael Jackson’s ‘The Way You Make Me Feel’ [Bad, EPC 504423 2], which showcased a wide soundstage, luxuriant synth notes and a groove to the rhythm section that was impossible not to tap along to.

In practice, the all-tube VK-80i’s ability to snap into a vocal or punch out a rhythm doesn’t translate to real stomp and aggression. Rather than race out of the traps like a greyhound, this amplifier gallops like a thoroughbred.

By way of comparison, BAT’s own VK-3500 has more headroom, more power and a livelier demeanour, but isn’t as assured in its rendering of tone. The price difference between them isn’t vast, so I’d recommend auditioning both to see which flavour you prefer. Either way, just be prepared to fall in love.

BAT’s revamp of its integrated amplifier stable continues in style – the VK-80i is a remarkably insightful listen, with an enviable talent for delicate detail and butter-smooth soundstaging. Power-hungry loudspeakers might be better served by the stablemate hybrid VK-3500, but tube devotees will cherish this amp’s way with music, and will likely find it more than juicy enough for their existing setup.