There are many things happening now that I never imagined 25 years ago – not least the vinyl revival and the fact that DAC separates are now so central to hi-fi systems. Another thing that I truly didn’t envisage was the return of the Japanese consumer electronics giants to the two-channel stereo market. There was a period around the turn of the millennium when it looked like big companies from Japan were getting out of hi-fi, leaving the market to smaller specialists. Now though, they’re seriously back in business – as Yamaha proves here.

A few years ago, the company made a major push into the market, offering precisely the same blend of quality and value that it did way back in the seventies when the hi-fi market was at its peak. Even more surprising is that its new products are styled in a remarkably similar way – which shows the crisp timelessness of those original amps, tuners and cassette decks. The company has just launched three new integrateds – the A-S1200, A-S2200 and the A-S3200 that you see here, plus the matching NS-3000 speaker. These join the recently introduced top-end 5000 pre-power products, meaning the company offers the full ‘train set’ of audiophile hi-fi separates now.

In my experience, Japanese products tend to offer a contrasting blend of strengths and weaknesses to British ones. Because of their larger production volumes, economies of scale sometimes mean that slightly more expensive components can be used – although this is often spent on the casework instead. UK designs are usually the brainchild of one gifted individual, whereas Japanese ones tend to be done more by committee. The result is that one breed is not necessarily better than the other, but they are invariably different. The A-S3200 is a textbook example of a traditional large, full-feature integrated from the land of the rising sun. Unlike so many of its price rivals, it’s totally devoid of streaming or even DAC functionality. This is an unapologetically old-school integrated, complete with MM/MC phono input and headphone output – almost as if this brave new world of networked digital audio had never happened. Personally, I rather like it like that – because most people who are serious about the subject will already have their favourite DAC and/or streamer, anyway.

The A-S3200’s bass is big and solid, but importantly has next to no overhang 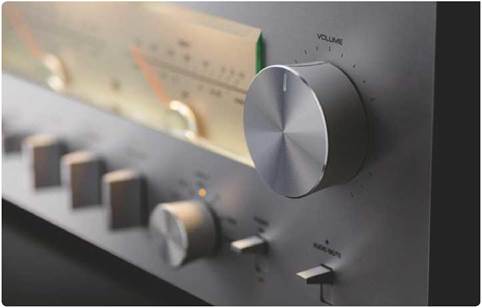 Tactile controls reflect the level of care take on every element

On the outside, we’re treated to a characteristic Yamaha fascia panel in beautiful brushed aluminium, complete with the sort of switchgear it was using four decades ago, and two large, brightly lit central power meters. In the seventies people scoffed at these because they weren’t particularly useful, thanks to the slow ballistics of the needles, yet they’re a lovely retro touch – and the A-S3200’s meters have a switchable peak mode. Despite this amplifier having a plethora of features, its fine

A textbook example of a large, full-feature amplifier from the land of the rising sun ergonomics are such that the front panel doesn’t feel excessively crowded. It’s available in a choice of black or silver, with polished piano black sides; the quality of finish is absolutely superb for the money.

A front panel headphone socket is offered, complete with ‘trim’ level control. There’s switching for two sets of speakers and a choice of peak or VU settings, plus a dim function. The usual bass, treble and balance knobs are present and correct (with centre detents), and there’s a large volume knob to the upper right of the fascia with a lovely butter­smooth action. The main input selector offers a choice between two unbalanced RCA line inputs, two balanced XLR ins, CD, tuner and phono. The ‘main direct’ function bypasses the volume control, plus preamp out, line 2 out and headphone socket – effectively turning it into a power amp. There’s also an MM/MC phono preamp selector, to the right. A muting switch completes the picture.

Yamaha claims a punchy 100W RMS per channel into 8ohm and 150W into 4, for this Class AB design – which is more than most people will ever need. The power comes not via discrete transistors, but as is the usual practice these days, MOSFET power modules. Interestingly, the phono preamplifier does use discrete transistors, and is very neatly laid out in a separate circuit board using good-quality components. It would have been so much easier and cheaper for Yamaha to have simply fitted a basic op-amp to do this job – so it shows a commendable level of seriousness about vinyl. 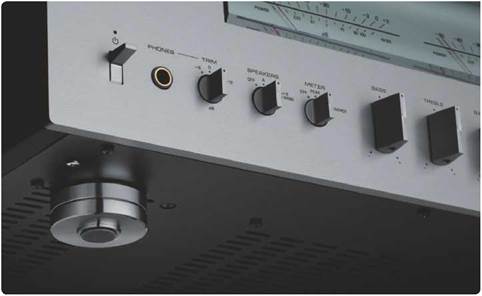 Standout facets area crisp, detailed and precise midband along with effortless and authoritative power delivery. For example, feed the Yamaha with some punchy eighties pop from Duran Duran, and Last Chance On The Stairway comes over in a really commanding way. Although not the sort of programme material you’d immediately classify as ‘audiophile’, this is still a well recorded track from the twilight years of analogue. There’s a lot going on, including a gutsy bassline and an energetic midband. Even at highish levels, driving my big Yamaha NS-1000M loudspeaker, this amp doesn’t flinch; its bottom end is powerful and expressive, and never shows any sign of running out of puff even at high volumes on crescendos.

Although the A-S3200 never sounds edgy or volatile, its clean and forensic midband is subtly tonally ‘well lit’. Heavily modulated nineties electronic dance proves more palatable than expected; Nookie’s The Sound Of Music doesn’t assault my sensitive earholes anywhere near as much as some amps I’ve heard, the sound presented with grip, bite and flare-flapping bass.

Another key attribute is the expansive soundstaging; it’s able to recreate a cathedral-like recorded acoustic, if that’s what was originally committed to tape in the studio. Large scale classic rock such as Los Endos by Genesis really fills the room. The soundstage pushes very wide left to right, and is decently three dimensional too. Better than many, the A-S3200 is able to set up a big sound. I am struck by the size and width of Phil Collins’ drum kit, with epic pan rolls that punch through the complex mix. Steve Hackett’s legendary guitar noodling is also a joy, sounding vital and alive.

Rhythmically the Yamaha is a battler. It doesn’t quite have the fluidity and lyricism of some similarly priced tube amps, but still makes music engaging and lively. This is achieved in two ways; firstly its midband has formidable transient speed, with a great rhythmic snap to the proceedings. Secondly, the bass is big and solid, but importantly has next to no overhang. There’s none of that spongy sensation that gives a pleasant bloom to proceedings, yet which slurs one note into the next. For these reasons, I find subtle pop songs like The Dolphin Brothers’ Catch The Fall sound surprisingly infectious through this bruiser. This big integrated amplifier is fast, detailed and lithe enough to make even relatively intricate music sound like it has a raison d’etre.

This accomplished performer succeeds through its breadth and depth of ability, rather than exceeding in one particular area. It’s a highly capable all-rounder, and many will love its snappy sound and gutsy demeanour. The only downside is its presentation lacks the more gentle, fluid character of some similarly priced valve amps and solid-state designs. As ever, this comes down to taste – so prospective purchasers should audition it if at all possible. Factor in its superb build, neat styling and overall air of quality, and I can’t help but be seriously impressed. Although expensive, the A-S3200 offers fine value for money

Check Price
Amazon.com
Last Amazon price update was: August 14, 2022 5:38 am
× Product prices and availability are accurate as of the date/time indicated and are subject to change. Any price and availability information displayed on Amazon.com (Amazon.in, Amazon.co.uk, Amazon.de, etc) at the time of purchase will apply to the purchase of this product.
MORE DEALS

Naim’s Supernait 3 (HFC 456) is a quintessentially British design that lacks both a DAC and streaming. It goes further by not having any tone controls, and sports just a basic MM phono stage and a power rating of 2x 80W RMS into 8ohm. It sounds more naturally musical than the Yamaha; despite lacking some of its punch it’s still lots of fun to listen to. The big Naim is more fluid, with a much bouncier bass and a more lyrical midband. However, the A-S3200 has a tidier, more precise and controlled musical character.

SFH: The new lineup of A-S3200, A-S2200 and A-S1200 integrated amplifiers follows in the footsteps of the C-5000 preamp and M-5000 power amplifier, released late 2018. Premium hi-fi has always been recognised as the best way to experience music at home. Yamaha has seen a consistent interest in this and it accounts for over a quarter of our global business.

It was designed by a team of Yamaha engineers, comprising of four electrical, two mechanical and one software. As we had already learnt a lot from the development of the C-5000 and M-5000 pre/power setup, the A-S3200 took one year and three months to create.

Where is it manufactured?

It’s made by Yamaha Electronics Manufacturing in Malaysia; this is just one of many Yamaha factories worldwide, responsible for audio equipment and service parts, which we own and operate with Yamaha staff to ensure the highest quality control standards are met. Being a large and historical company such as Yamaha brings benefits in terms of research and development, specialist manufacturing and the inheritance of knowledge. We have high-powered computer simulation facilities and a number of in-house specialist manufacturing resources readily available – such as woodworking, tooling, metal processing, product process and others. This gives us the ability to turn an idea into reality with very little outside help. Our knowledge of audio spans over 60 years, over this time we were able to collect valuable experiences and expertise within this field. 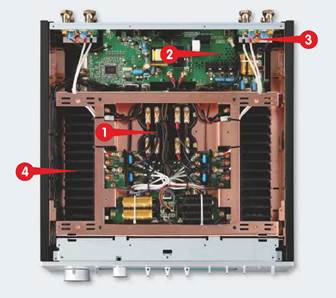 There’s sometimes a tendency in the West to look at big Japanese companies as faceless corporations, with little in the way of charisma. Yet Yamaha is very much the reverse of this. It has an illustrious history, starting when founder Torakusu Yamaha repaired a broken reed organ back in 1887. He then built his own, and founded his company Nippon Gakki Co. Ltd. 10 years later, selling musical instruments. Yamaha was fascinated by Western science, as well as music theory and tuning, hence adopting three tuning forks as its logo.

After over half a century specialising in musical instruments, Yamaha entered the hi-fi market in 1954 and one year later Yamaha Motor Co. Ltd. was set up. This was a period of huge growth for the company, and by the early seventies it was also a semiconductor manufacturer. That decade was a period of great innovation for Yamaha’s hi-fi division with the launch of the groundbreaking NS-1000 loudspeaker range and the B-1 V-FET power amplifier in 1974. The size and diversity of Yamaha confers great development resources, and Simon Feben-Harknett says that the new A-S3200 takes advantage of precisely these: “We can bring a Yamaha perspective on how music should sound. As a musical instrument manufacturer, we know music from the moment it’s created by the artist.”

£299.95
Added to wishlistRemoved from wishlist 0

Exposure 3510 Review: Back tracking to the future