Precision engineering specialist SME builds one of the world’s most desirable turntable packages. Prepare to be amazed… Read our SME Synergy Review.

With most all-in-one, ‘starter’ turntables coming in under the price point – some much less – it’s more than a little surprising to see specialist manufacturer SME introduce its own take on the format with a price tag that comes in at a little under £.

Formed back in 1946, the company has a reputation for excellence. This isn’t just for sound, but in respect of build quality too and despite a change of ownership, we expect nothing less than genius from its Synergy offering.

The package comprises a compact new motor unit based on the Model 15, with a special tonearm that closely resembles a Series IV This comes pre-fitted with an Ortofon MC Windfeld Ti moving-coil cartridge, and there’s a bespoke integrated 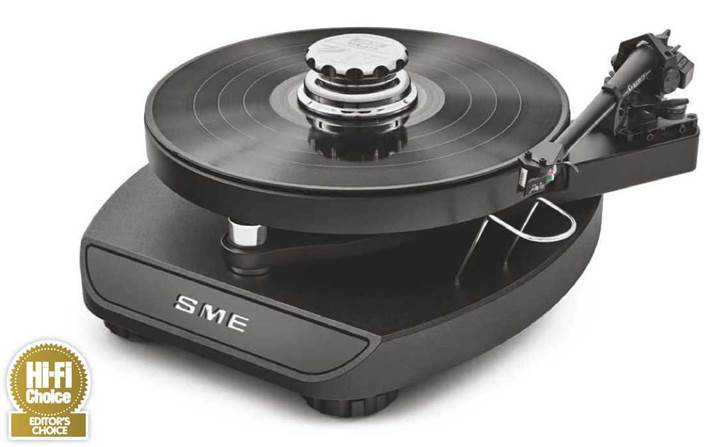 phono stage by Nagra, with all the wiring done by Crystal Cable.

SME’s CEO Stuart McNeilis explains: “It is aimed at customers seeking a turntable solution which is factory configured, setup and ready to play… The partners we selected match the stringent ultra-high quality and reliability disciplines of SME. It was critical to partner with like-minded high-end audio manufacturers with an impeccable track record.” This is made even more seamless because the company’s UK distributor (Padood) also imports Nagra – so it’s keeping things very much in the family.

It’s part of a strategy by McNeilis – a former aerospace man, appointed as SME’s head honcho by owner Ajay Shirke’s Cadence group – to grow its precision engineering side in a range of

sectors from Formula One to medical and high-end automotive. That’s why it has taken the decision to get a UK distributor for its audio side, so that the company can concentrate on design and manufacturing rather than selling. Currently, about 60 percent of SME’s business is hi-fi, whereas just a decade ago about 70 percent was precision engineering.

If you’re a fan of the brand, the Synergy will seem very familiar, yet strangely different. As you’d expect, it plunders the SME parts bin extensively – but that’s one hell of a parts bin. The deck looks like a Model 15 that’s shrunk in the wash. The motor is a derivative of the one found in the Model 20, the bearing is from the Model 15, but re-engineered to work effectively with the new subchassis, and the platter is shared with the Model 15. The result is a small, compact turntable that starts with an aluminium base unit that has rubber isolators inside three pillars, to decouple it from its surroundings.

It sits on three adjustable feet. The upper tier carries the arm mounting, bearing assembly and inner platter; the motor is decoupled from the chassis by rubber bands.

There’s also an electronic speed control unit that’s housed in a one-piece CNC machined case, and gives microprocessor-controlled speed via a closed loop servo system, with 33, 45 and 78rpm with +/- 0.01 percent fine pitch speed adjustment. It spins the 4.6kg platter up to speed quickly, and is topped by a special mat. The phono preamplifier is built in, but has a separate power supply (not shown) attached to the deck via its own cable.

The arm is basically an SME Series IV, but with new Synergy livery on its lightweight diecast magnesium tube. It gets special Crystal Cable Monocrystal internal wiring and phono cables. The arm bearings are superb, with a lovely feel when hand cueing, thanks in large part to the 10mm ABEC 3 ball bearing races. The yoke is mounted to the 23mm diameter heat-treated, ground and honed steel pillar, with a pair of 17mm ABEC 7 ball bearing races, widely spaced to resist tilt.

The highly capable Ortofon MC Windfeld Ti moving-coil comes pre-fitted and aligned, so all you need to do is take the stylus guard off and you’re good to go – something that even I can manage without breaking anything. What strikes you about the Synergy is that there’s something almost magical about the sound – cue up your favourite record and you can’t help but be amazed. You’re instantly aware that you are listening to a deck that is totally top tier; everything about the package’s performance is of an extremely high order, with nothing to fault and almost everything to love. Scritti Politti’s The 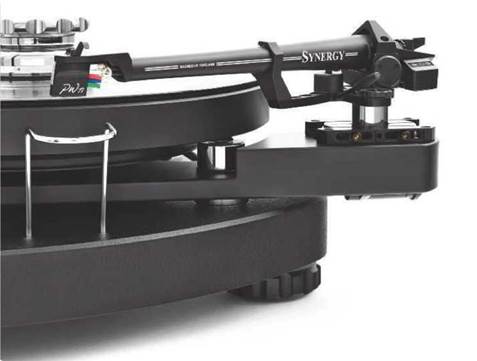 Word Girl is a whimsical eighties pop song that isn’t particularly well recorded, but the way the SME handles it is impressive. It has a wide, spacious and three-dimensional soundstage with accurate image location, a fulsome tonality with more guts than you’ve a right to expect for the era, plus a relentlessly propulsive musicality. Above all, though, is the sense of polish and precision to the whole production, which makes me want to keep on listening all night long.

Serious vinyl spinners always do soundstaging well, and this new SME turntable package duly delivers the goods. The Scritti Politti track comes right out of the speakers to meet me, filling the room with a supremely confident and stable sound, acting as if it owns my listening room and I am lucky to have been let in to hear it. I’ve heard rival high-end turntables do slightly better in terms of scale from left to right, but the Synergy shows excellent depth perspective and places instruments with rifle-bolt precision within the soundstage. Individual elements of the mix sound so secure they could have been nailed to the wall.

Moving to Change’s A Lover’s Holiday,

I am struck by the sheer smoothness, sweetness and polish of the package. This is a classic disco track from the seventies with actual acoustic instruments and the SME really brings their timbre to the fore, giving a largely translucent rendition of the record that has just a touch of extra warmth thrown in. Some of this elan is recognisably from the tonearm, which has an exceptionally solid low-end response that underpins the bass drum and bass guitar with more guts than you’d expect. At the same time, it shows great polish in the treble, rendering the hi-hat cymbal work with a delicious slickness that one rarely hears, even from high-end vinyl. All this makes for a powerful, barrel-chested and opulent sound, with an ever so subtle sepia tint for good measure.

Musically, the SME takes the rhythm by the scruff of the neck and delivers it right at you. The Teardrop Explodes’ Reward is a frenetic early eighties indie-pop stomper, and the Synergy steamrollers it along with super-fast attack transients – doubtless down to the motor unit’s fine speed stability and the tonearm’s grip – and the very lithe sounding Ortofon MC Windfeld Ti cartridge. It is real foot-tapping stuff, but interestingly the deck remains in complete control at all times. In conjunction with excellent dynamics – it’s easy to hear the music’s subtle accents as well as track serious level changes – the result is a gripping and highly engrossing sound.

It’s very easy to love SME’s Synergy; you can spend more on separate deck/arm/cartridge/phono amp combinations, but the jury’s out on whether the sonics of this package can be beaten at the price. I love its no-nonsense styling, its physical compactness, the superlative build and its overall sound. If you’re lucky enough to be able to afford it, SME’s Synergy package is an essential purchase for all types of vinyl fans.