Called Debut because this turntable is a starter package. It’s simple in outline, harking back to earlier times in some areas, yet with modern updates to wring the best from LP.

What you get here is a three-speed turntable, that switches from 33rpm to 45rpm with no need to belt-change. It will spin old 78rpm shellacs, but this does require a belt-change. As an all-in-one package it comes with a budget Ortofon 2M Red moving-magnet (MM) cartridge fitted, there’s an elegant hinged clear acrylic dust cover and a wrapped carbon fibre tonearm – very modern. However, whilst the arm avoids using a traditional aluminium tube, 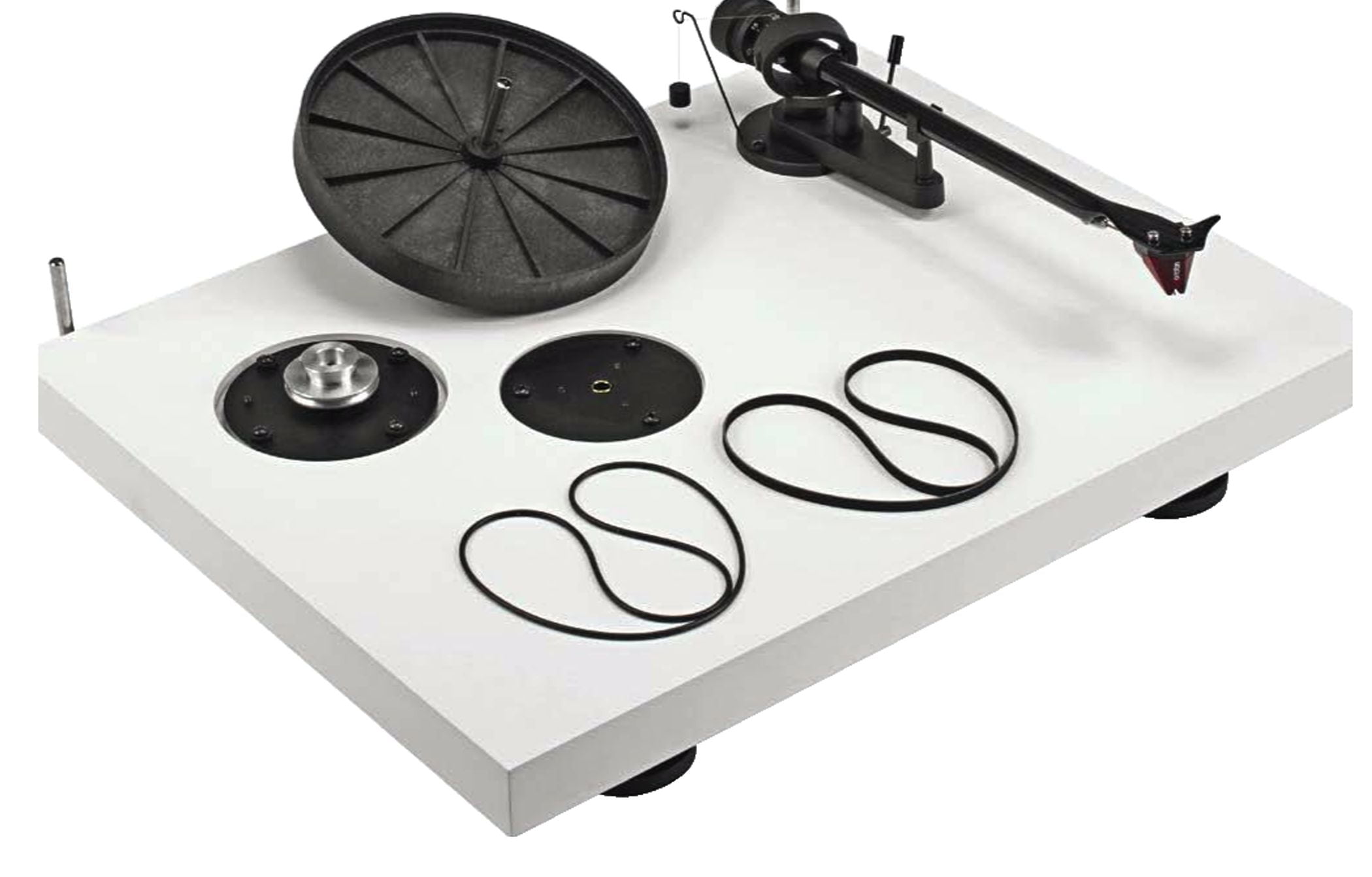 A sub-platter is driven by a precision flat belt for 33rpm and 45rpm speeds, switch selectable at front – beneath the plinth. A simpler O ring belt (left) must be fitted to spin 78s. 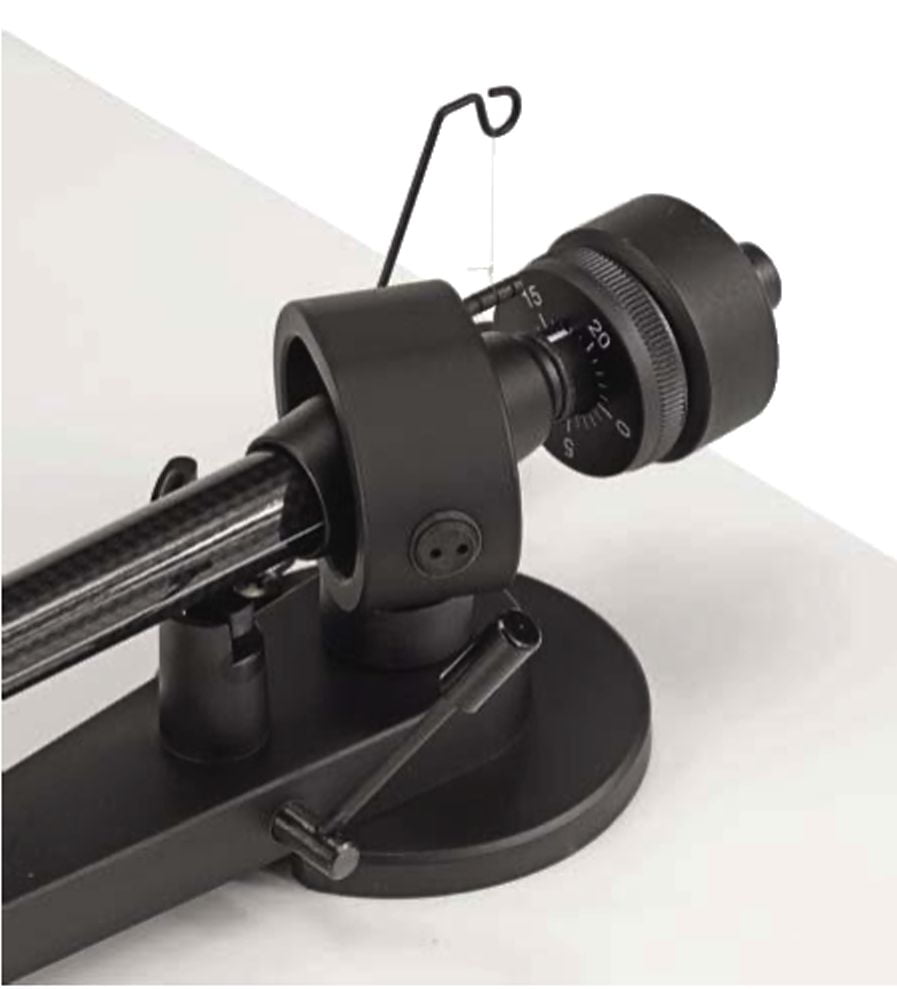 The arm has a damped cue platform with fever, a calibrated rear counterweight and simple weight-end-thread bias that passes over a wire support.

to eliminate tuning-fork style tube resonance, it is trad, in other ways to keep construction simple and inexpensive.That means a bag of bits and a small set up procedure, but no big problem here for most users I feel.

The drive system, like the arm, is also a hybrid of old and new. There’s tried and trusted belt drive from an a.c. motor to the platter hub, but the motor is fed by an internal electronic power supply to avoid mains fluctuations. Nowadays a common idea and one that works well, since the internal power supply is fed low voltage (15V) d.c. from a small external wall-wart power supply unit, switch-mode of course. This means the turntable is not mains earth connected, point being the possibility of hum from an earth loop is eliminated.There are no high voltages in the turntable either: put it in a tub of water and you won’t get a shock – to illustrate a point!

Slightly irritating here was the very short (120cm) power lead of the supply that will demand an extension lead in many systems I suspect.

Whilst a measly short power cable might seem like penny-pinching, Pro-Ject still manage to supply an attractive vacuum formed clear acrylic dust cover, that moves on friction hinges. It can be slipped off the hinges if preferred, as can be necessary in a shelf system where space between shelves is limited.

The simple MDF plinth also has three height-adjustable feet so it can be perfectly levelled, as a turntable needs to be if the arm is to perform as expected.

The power rocker-switch is hidden underneath the platter at front left and is easy to get at A small d.c. power inlet hides underneath and the signal cable outlets are easily accessible at rear, together with an earth terminal that must be used, not for safety but to earth internal metal parts to avoid hum pickup from possible induction into them. All standard practice nowadays and a very good methodology too. 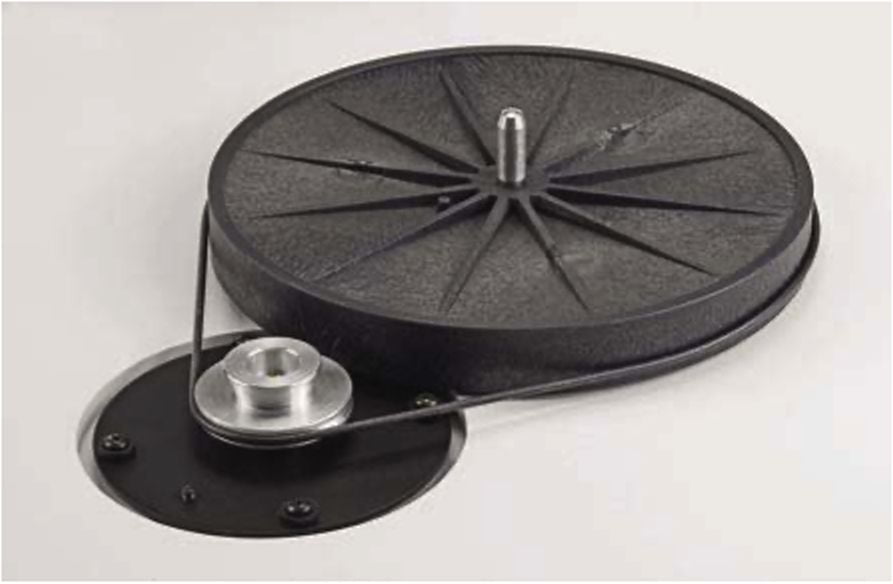 This is the 78rpm belt set up for spinning old shellacs. The large motor pulley diameter is profiled to accept a rubber O ring style belt.

accommodate rear overhang of the cover, the Debut Carbon Evo is about as small as they come. A pair of signal leads with earth are supplied, measuring I m long – setting maximum distance to an amplifier unless a longer lead is purchased separately.

Set up is mostly done at the factory, where the cartridge is installed and overhang adjusted for minimum tracking error.The counterweight that sets tracking force – I.8gm for the 2M Red cartridge fitted – comes unattached. However, it is calibrated, so is simply screwed onto the rear of the arm, set to zero when the arm is in balance, then 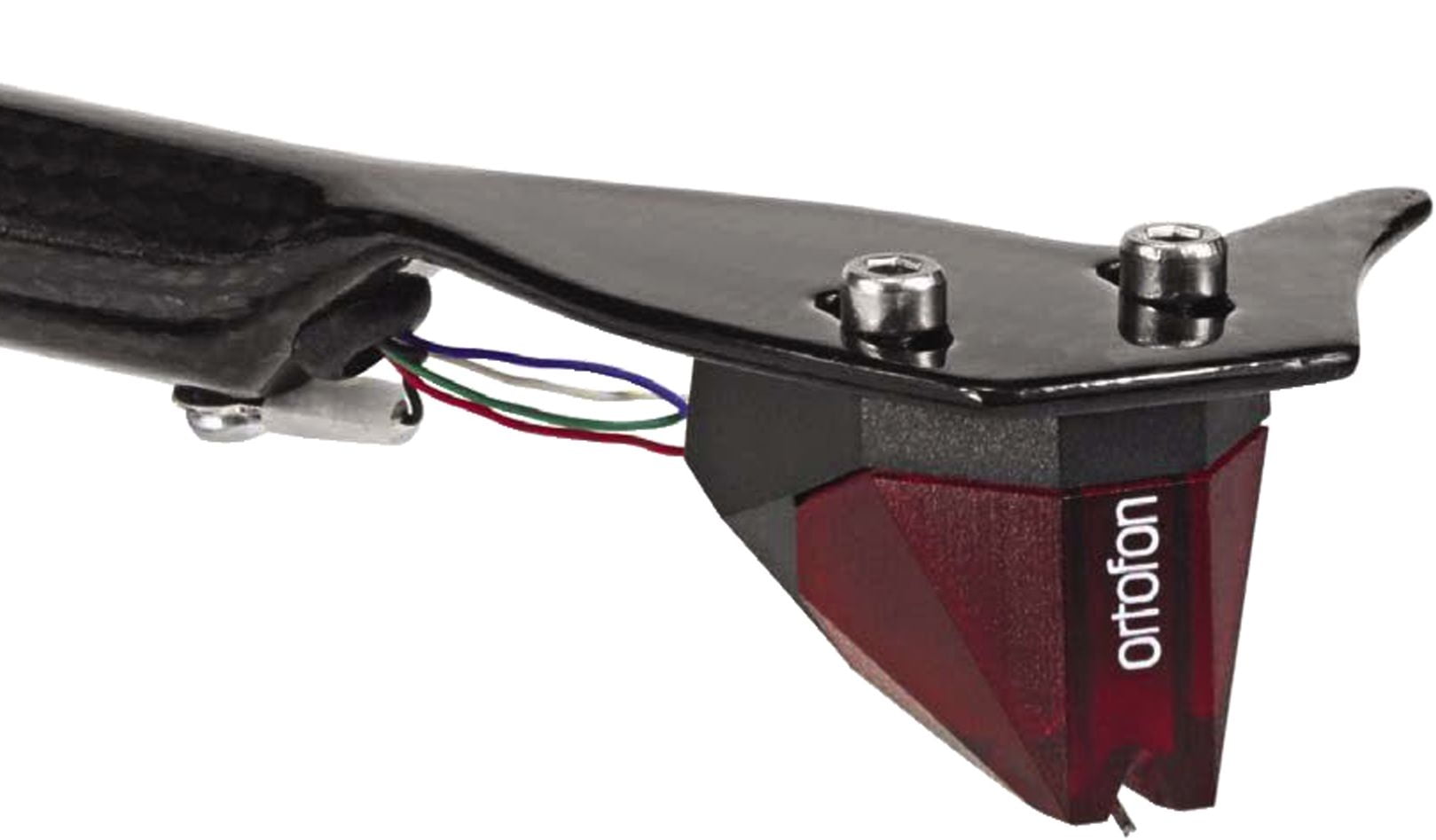 The headshell is integral to the arm, making cartridge changing difficult. The finger lift is flat and slippery – not ideal for those that manually cue.

screwed forward to the 1,8gm mark; I used 2gm, the upper limit Not that the 2M Red is a bad tracker, so much as the sense of security that comes from highest force when playing hot (loud) cuts.

The final touch is to fish out the bias weight and thread from its bag, carefully thread the loop over a small rear rod and settle it into one of the three grooves; i used the furthest groove from arm pivot to apply maximum bias, as tracking tests show this is necessary for best performance when things gets difficult Pro-Ject recommend the middle groove. Music LPs are usually cut well below that of test discs in terms of level, so no big issue here, more a matter of assurance.

The arm is entirely manual, so it must be cued down using the damped platform then cued up at the end of a side. Manual cueing using the finger lift is not easy because it is flat, slippery and close to the LP surface on this arm.

I should mention that a heavy 1.7kg pressed steel platter, with thermoplastic elastomer damping pad around its internal periphery, must be placed onto the hub and there’s meant to be a felt mat it seems, but ours was missing – perhaps moths got there first!

Pro-Ject say the Ortofon 2M Red cartridge fitted has “a slight touch of warmth”. Hmmm. Back in our March 2015 issue review of the RPM I Carbon turntable similarly fitted I said “The Ortofon 2M Red MM cartridge we first measured and reviewed back in 2007. Its stand-out feature is a flat frequency response with small treble lift, so it doesn’t sound warm like MMs of yore”. I have good memory of the 2M Red as such, so I wondered whether the 2020 unit in this turntable had been softened up a tad from its predecessors – going back 13 years no less. More about this in Sound Quality and Measured Performance, 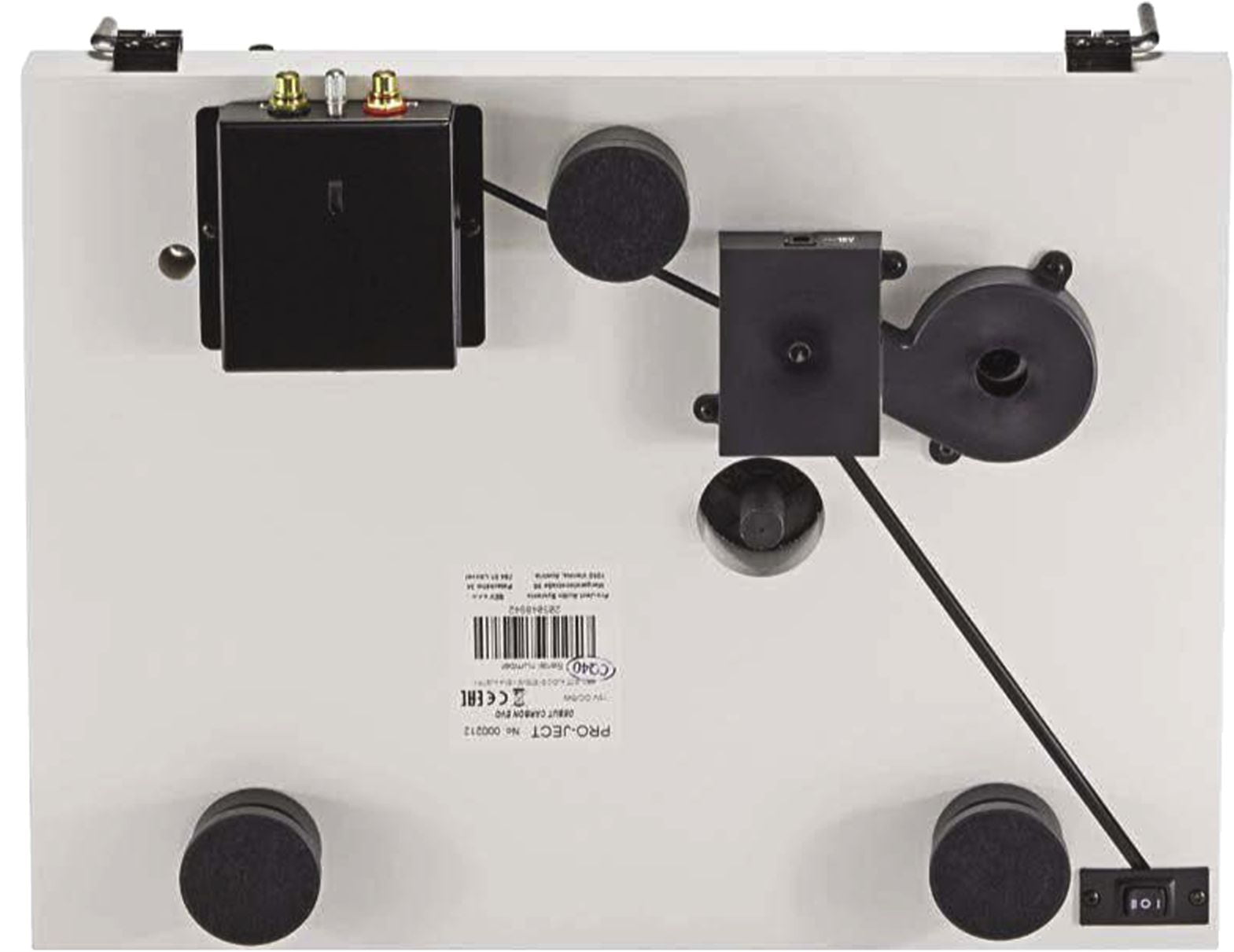 The underside has a screened connection box (top left), three height-adjustable feet and a three-way rocker switch (bottom right) for 33rpm / off / 45rpm speed selection. All neat and simple.

made it to the floor and one of the phono plugs in the signal cable was loose, intermittent and tripped the amps protection circuits a few times before I taped it in place.

Dropping arm onto my preferred starter LP for reviewing, Two Countries, One Heart, that is well balanced and cleanly (recently) recorded, the Debut Carbon got off to a great start. With Fanfare for the Common Man, kettle drum strikes were firm and clear and as the track played it was apparent that the 2M 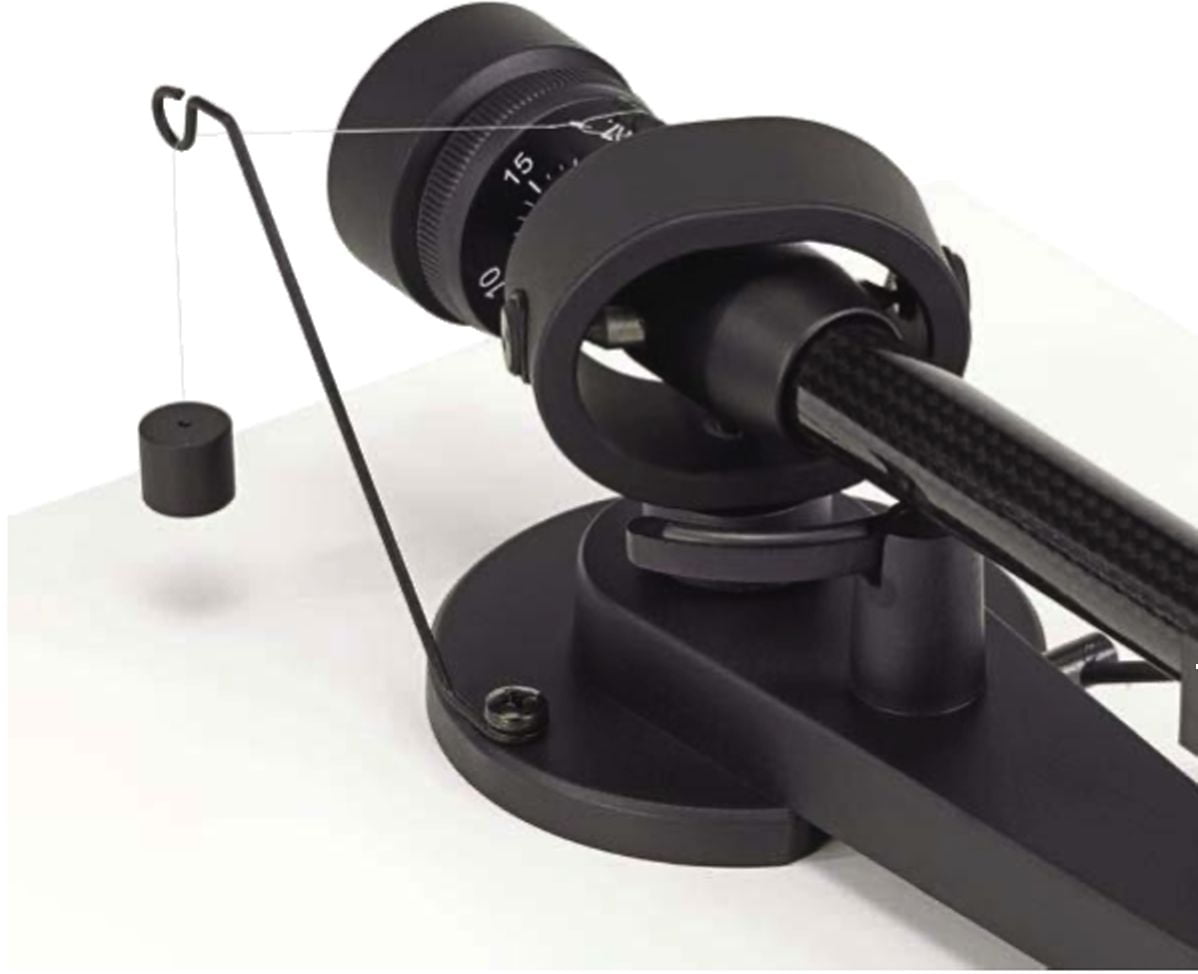 Red cartridge is now more svelte than in the past. Gone is its slightly sharp top end, but at the same time this is not a warm sounding cartridge. It is as academically flat as CD and there was a sense of perfect balance to the sound.

What I loved straight away however was the detail in and the separation between the trumpets: we’re talking high quality analogue here. Also, I could hear right into the character of the kettle drum, enjoying its lovely resonant overhang. Superb straight away – and immediately musically engaging. No digital

Two Countries One Heart also has a great end-of-side ‘test track’ where Rosella Caporale gloriously sings Time To Say Goodbye (I love the weepies!) and again the Debut showed it could deliver this track beautifully in true and best analogue fashion. Her soaring crescendo in the last grooves held steady and was brightly clean but not sharp and edgy.There was a little glare and lack of solidity perhaps, but heavens this is a seriously budget turntable. In my head I am comparing it with our SME309 arm fitted with an Ortofon Cadenza Bronze MC cartridge, a quality standard imprinted into my brain.

The Debut with 2M Red cartridge came over generally as not-warm, strong mid-band insight pushing out vocals and instruments vividly.The penalty here is that old or damaged LPs can sound harsh or noisy, because the turntable reveals LP problems rather than ameliorating them. Best to have at least one or two audiophile LPs available with a critical turntable like this to know how good it can sound when fed decent material.

I span a few older faves like Blues Breakers (Decca, 1966) and as expected the 2M Red revealed iffy recording quality (a hollow metallic sound) and Clapton’s guitar solos were in my face from the 2M Red. No spit from groove noise though.

The arm is a one-piece wrapped carbon fibre tube with integral headshell – for lightness and strength. This construction reduces the vibrational modes of a traditional aluminium tube.

one clear and concise. With Walk of Life kick drum at start was firm and with powerful presence, ride cymbals cut out sharply. I was expecting this LP to sound a tad warm – as I know it – but not so.The 2M Red is more revealing than romantic.

Pro-Ject’s Debut Carbon Evo turntable is a fine starter package, with assured performance. By this I mean no weak spots, such as unstable speed.The Ortofon 2M Red cartridge fitted technically works well, but it lacks warmth and ‘the vinyl sound’. Great with modern, high quality LPs but not alluring with older stuff. All the same, this accepted, the Debut Carbon Evo package is a good one and right up there at the top.

The Pro-ject Debut Carbon Evo was both speed accurate and speed stable under test. The 3150Hz test tone of our DIN 45 452 test disc changed little, from 3152Hz to 3155Hz – negligible speed error and very little speed wander as belt drives go, in fact close to Direct Drive. As a result there was little Wow, just 0.13% (DIN unwtd). Notes will stay stable and there will be no wateriness of pitch that comes from a wandering turntable.

Our analysis shows some flutter components, measuring 0.07% – a bit above the usual 0.04% but difficult to say how or even if this will affect the sound.

The Ortofon 2M Red cartridge fitted to our review sample had a flat response and this will give it a tonally neutral balance with good delivery of detail. Treble now falls slowly above 3kHz our analysis shows (JVC TRS-1007 test disc), avoiding sharp treble. The elliptical stylus inevitably exhibits tracing loss on inner grooves (short mechanical wavelengths) as the red trace in our analysis shows, but not enough to sound dull at end-of-side. The 2M Red tracks very well – no problems here.

£135.95
Added to wishlistRemoved from wishlist 0