Before compact disc, nearly all amplifiers had a built-in phono stage. A few still do. Add a turntable and you’re good to go. Life is just as simple if your record player has a phono stage on board. Connect it to a line-level- only amplifier and, once again, music is mere moments away. For some, the sooner you get plugged in the better, and that’s understandable. Choose your components well and the unseen on-board stages should prove more than adequate, cutting down the box and cable count and delivering a decent enough performance, even if you consider your turntable as more than a token LP spinner.

If the love of vinyl runs a few fathoms deeper, however, devoting a fair chunk of your system budget to a dedicated external phono stage – and taking as much care selecting it as you would the deck, amplifier and loudspeaker – is likely to reap significant sonic benefits. That potential step change in sound quality is one reason why the market for phono stages is so buoyant with dozens to choose from spread over a broad span of price points. Some are dressed in small, nondescript plastic or metal cases perhaps best tucked away at the back of the equipment rack. But a number are more conspicuously styled, often to match other components from the same manufacturer. A good example being Chord Electronics’ Huei (HFC 460), a bijou aluminium brick that is clearly a close relation of the company’s Qutest DAC (HFC 436).

Another is the Primare R15. It’s a price rival for the Huei but very much larger and heavier with casework all but identical to that of the Swedish company’s ‘three-quarter sized’ I15 integrated amplifier. Not an item to tuck away out of sight, then, and you probably wouldn’t want to even if you could as Primare’s spare Nordic neatness is the kind of understated design you can’t help looking at. It’s an easy shoo in for aesthetic harmony if you already own an I15 integrated or, come to that, the

company’s full-width I25 (HFC 459) or I35 (though, if you can run to it, Primare’s flagship R35 phono stage is a size match for the more expensive amps). Whatever the permutation, you’ll be buying into Primare’s minimalist aesthetic and intention to deliver the sonic goods without artifice or affectation.

It’s hardly a surprise that the R15 takes many of its design cues from the more sophisticated R35. Like that unit, its high-gain setting can accommodate the lowest of low output moving-coil cartridges and, as with all serious phono stages, aims to do so with the minimum of noise. Getting this right, Primare contends, has a lot to do with the design of the power supply. The R15 uses a linear low-noise discrete supply fed by a custom-made, mu-metal shielded toroidal transformer, the reason cited being you can have a more controlled magnetic field with a toroidal transformer by simply turning it so that the least amount of noise infiltrates into the circuit from the power supply.

On the input side, a low-noise MOSFET is used in conjunction with a ‘hybrid equalisation system’ that teams an active circuit for low frequencies with passive circuitry for high-frequency EQ. There are six impedance and two capacitance settings for moving-coil cartridges while moving-magnet types get two impedance and four capacitance settings. Up to 65dB of gain is quoted for the moving-coil section (45dB for MM), while a four-layer circuit board shortens signal paths in pursuit of lower distortion. There’s also a subsonic filter, which could be useful in attenuating sub-bass LP warp frequencies and taming excessive bass driver cone excursions, particularly with reflex-loaded loudspeakers.

The weighty robustness of the heavy steel casing inspires bags of confidence, too. Set-up controls and switches are on the back plate and, given the available space, they’re well spread out. Starting on the left, the grounding post is conveniently close to the RCA analogue input (not the case with some previous Primare phono stages) and, either side of the analogue input, are the banks of inevitably fiddly dip switches for configuring MC or MM impedance and capacitance settings. In the middle of the panel is the RCA analogue output and, to the right of that, toggle switches for the subsonic filter, MC/MM mode and gain settings and, finally, the mini-jack service and trigger ports.

I line up a couple of turntables to try with the R15. First up is Rega’s Planar 6 (HFC 453) fitted with the company’s entry-level, low-output moving-coil Ania cartridge (HFC 452). At the opposite end of the gain scale, Ortofon’s popular 2M Red moving-magnet cartridge gets an outing in Elipson’s Omega 100 Carbon Black turntable. Completing the system are a Hegel H120 (HFC 460) integrated amp and Dynaudio Evoke 30 floorstanding speaker (HFC 460). And, as it’s the circa-£ phono stage I’ve been using with the Rega and Elipson lately, Chord Electronics’ Huei is sticking around for comparison.

Adding further fascination to its nuggety build and colourful microprocessor control system, the Huei’s design aesthetic is a little

6 Two gain settings for both MM and MC pick-ups

different to that of most phono stages in this price bracket.

Take Eric Clapton’s 1986 album, August. With a little help from Phil Collins on mixing desk duties and a relentlessly up-beat vibe, there are some decent tunes stymied by a dismally dense and claggy production. Remarkably, the Huei manages to mine the catchiness,

subtler hooks and an infectious rhythmic snap from the period cheese and murky sludge. At least it does when teamed up with the Rega Planar 6, which has a sympathetic talent for nailing the musical message – whatever it happens to be – and not sweating wonky recording minutiae.

With the same feed from the Rega turntable, the R15 gives the sound a

somewhat more literal, critical and dry character, delivering matter-of- fact clarity that lays bare the LP’s sonic shortcomings with telling analysis but little sense of pleasure, guilty or otherwise. That’s the difference a phono stage can make. Eyes closed, you could be listening to a different turntable. But cue up a well-recorded live performance

–   and the R15 comes into its own. Nine minutes of Comfortably Numb isn’t just atmospheric but utterly mesmerising with a sense of air and unfettered bandwidth that captures the scale and magic of the music and the venue.

This has nothing to do with the hyped presence some phono stages employ to pep up proceedings, but a precision and focus that doesn’t blunt edges, blur textures or drag tempos and presents the solid and the spacious as a coherent whole with the full spectrum of tonal colours and 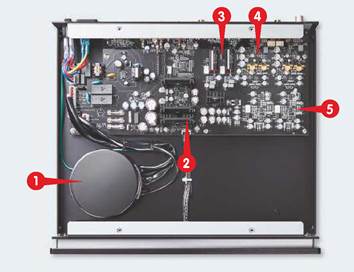 accurately rendered instrumental timbres. The Huei sounds a little more lyrical and fluid, but there’s a more obviously forensic, pristine quality with the Primare that pulls you deep into the mix.

Switching to the Elipson deck and Ortofon 2M Red cartridge, the R15 again delivers a solidity and sense of authority that makes it easier to imagine being in the presence of living, breathing, musicians. Beverley Knight’s orchestrated soul on BK25 sounds properly big and powerful, especially album opener Make It Back. Here’s a horn section with oodles of bite and attack that also opens up a whole world of harmonic and dynamic contrasts rather than sounding merely bright and metallic. Spot on.

I’m always impressed how well an affordable moving-magnet cartridge like the Ortofon can sound given the chance to shine, and the Primare R15 effortlessly waves through its A game. A low-output moving coil such as the Rega Ania is trickier to get right but this, perhaps, is where the R15’s greatest strength lies, combining vanishingly low noise with terrific transparency, if a slightly cool and lean tonal balance. Recommended

Stiffest competition comes from Chord Electronics’ comparatively diminutive (but ever so chunky) Huei (HFC 459) which, as well as being both innovative and cute, is a little more refined, fluent and forgiving than the Primare but doesn’t sound quite as detailed and analytical. Both are top-drawer performers in their own ways. Other stages to shortlist include the Rogue Audio Triton II (HFC 447), Rega Aria (HFC 437) and Vertere Phono-1 Mk II (p54).