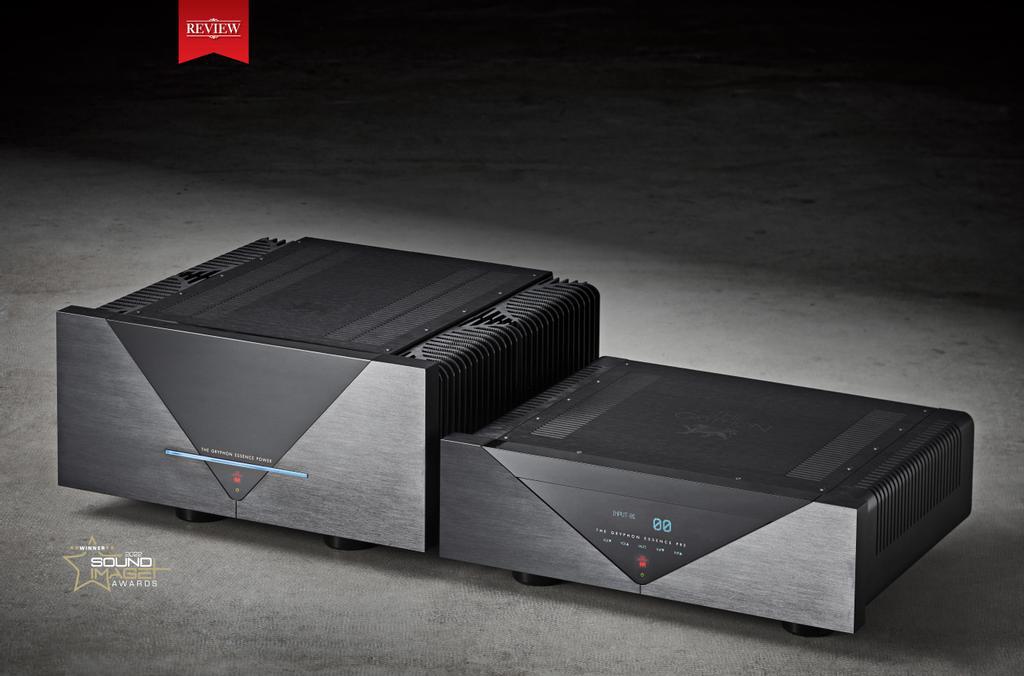 Such a titanic combination did the Gryphon Essence Preamplifier and Stereo power amplifier present when they first appeared in the pages of Audio Esoterica that we are paying a return visit to their wonders now, in celebration of the advance information — classified at the time of publication, indeed, and to be divulged only to you, dear readers — that the Gryphon pre-power amplifier is being awarded the top-level Sound+Image Award for Pre-Power combinations in the upcoming 2022 Awards.

The reasons for this recognition will be self-evident if you have read the original review. The stereo power amplifier is a very, very unusual audio amplifier. Which, if you know anything at all about this proudly Danish high-end audio specialist or its recently-retired founder, Flemming E. Rasmussen, should not come as a surprise. Although Flemming is still associated with Gryphon, the company is now owned by Valdemar Martin Borsting and Gryphon’s employees, which includes electronics designer Tom Moller, who has been the head of the design team at Gryphon for many years now.

The Essence has so many unusual and interesting circuit features that it’s actually difficult to know where to start when describing them. The first thing to note is that the Essence is a true ‘dual mono’ design, where the left and right channels are completely independent of each other. This is fairly common for power amplifiers (and also true of the circuitry inside the Essence Stereo power amplifier) but it’s actually quite unusual in a preamplifier. The next interesting thing is that there’s absolutely no signal wiring inside the Essence. The very few wires inside it are a short ground lead, some ribbons for the frontpanel display and the mains power wires — and even these are contained within shielded channel.

Perhaps the most interesting feature from a conceptual viewpoint is the Essence’s ‘Green Bias’ link which, when the Essence preamplifier is used in conjunction with a Gryphon power amplifier, allows automatic selection of the level of bias applied to the power amplifier’s output transistors (see the section titled ‘Green Bias’, on page 72).

In keeping with Gryphon’s philosophy of maintaining signal purity (which mandates the use of d.c. coupling and eschews the use of negative feedback), there is no volume control as such. Gryphon instead uses a microprocessor-controlled 43-step fully-balanced relay-controlled ultraprecision resistor array to attenuate the signal.

There is no extraneous circuitry inside the Essence. If you want to add a digital stage, or a phono stage, this is achieved by the installation of an additional module. Intriguingly, although two modules are available, you can install only the one or the other, because there’s only room for one. If you do need both phono and digital inputs, Gryphon suggests that you install the digital module (Zena DAC) and connect Gryphon’s standalone Sonett phono stage to one of the Essence’s line inputs, of which there are five — two balanced (using gold-plated XLR connectors) and three unbalanced (also via gold-plated RCA connectors).

It makes a lot of sense to provide a DAC via a module, rather than integrating it with the rest of a pre-amplifier’s circuitry. 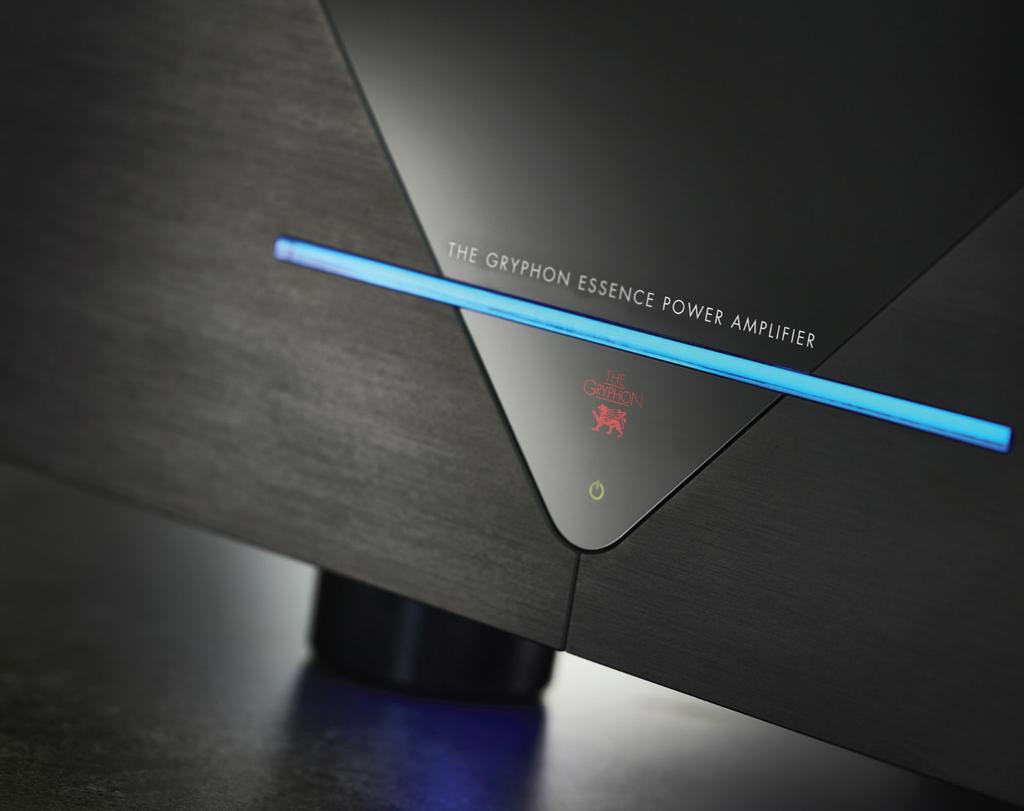 “Gryphon has a philosophy about cables as, indeed, it does about everything involved in audio. It says: “Wires should never be utilised as equalisers.”

The most important is obviously that if you don’t plan to use any digital sources, there’s no sense in paying for digital inputs. But equally important is that it’s possible to upgrade a modular DAC, with Gryphon itself pointing out that its “future-proof digital module is ready for any current or foreseeable high resolution digital format.”

The Essence has only balanced outputs (via XLR) presumably on the reasonable assumption that anyone who buys an Essence will be using either a Gryphon power amplifier (all of which have XLR inputs) or that the amplifier they do use will have them.

Rather unusually for a high-end audio-only preamplifier, there is also a subwoofer output — or, more correctly, there are TWO subwoofer outputs. Note, however, that these are not your typical subwoofer outputs because they’re full frequency-range, not low-pass filtered.

The Gryphon Essence Stereo weighs 45kg and is almost half a metre wide and half a metre deep, and 24cm high. So now guess how much power it can deliver. If you’re thinking it might be four or five hundred watts per channel, you’re in for a bit of a surprise. It’s just 50 watts per channel if you have 8Ω speakers. If the impedance of your speakers is 4Ω, Gryphon’s Essence will deliver 100 watts per channel… and if you have 2Ω speakers, it will deliver 190 watts per channel. This power is managed by ten Sanken bipolar output transistors per channel. The separate driver section has its own power supply, delivered from individual windings of the custom-made toroidal transformers. The power capacitor bank in the Essence Stereo is 440,000μF per channel. As you’d expect in any sophisticated power supply design, both versions use high-quality polypropylene bypass capacitors.

If you understand how Class-A/B amplification works, with each of two transistors operating over more than 180 degrees to eliminate the switching glitch as signals cross zero, then you’re halfway to understanding Gryphon’s Green Bias. The amount of overlap between the two transistors’ operation is determined by the amount of bias voltage you apply to the transistors. If you use a low bias, the amplifier will operate in Class-A mode up to a certain set power — say, 10 watts — before switching to Class-A/B. Let’s call this Amplifier X. If you use a higher bias, the amplifier will operate up to, say, 20 watts in Class-A before switching to Class-A/B.

With the Essence amplifier (as with several other of its amplifiers) Gryphon allows you to select the level of bias you’d like to use (and therefore the amount of power that will be delivered in Class-A mode). Firstly, there’s a manual selection on the Essence power amplifier, which has positions for ‘Low Bias’ and ‘High Bias’. If you use the Low Bias mode the amplifier will be more economical to run, but will switch from Class-A mode to Class-A/B at a lower level than if you select the High Bias mode.

If you choose the High Bias setting, the amplifier will operate entirely in Class-A mode, but will be, well, a lot more expensive to run!

However, if you select the ‘Green’ mode, and link the ‘Green Bias’ terminal on the preamplifier to the equivalent terminal on the power amplifier, the power amplifier will select the bias level automatically, which it will calculate using an algorithm that’s based on the position of the pre-amplifier’s volume control. Using this mode enables Gryphon to offer a third (Medium Bias) mode in addition to the Low and High Bias modes, and vary when the mode will change. Choose one scenario and the Low Bias will apply for volume settings from 00 to 09, Medium Bias for 10 to 19 and High Bias for 20 to 42. Choose the other and Low Bias will be applied for volume settings from 00 to 15, Medium Bias for settings from 16 to 25, and High Bias for settings from 26 to 42. It’s a very clever design and a very convenient one for listeners and the planet.

IN USE AND LISTENING SESSIONS

Although you might imagine that given Gryphon’s minimalist philosophy and the lack of a balance control or tone controls the Essence pre-amplifier would offer no user niceties, nothing could be further from the truth. It has some very cool and useful features.

There is input level matching circuitry which doesn’t introduce additional components into the signal path, rather storing the offset values in the microprocessor that controls the resistor attenuator network, thereby ensuring the purity of the audio signal. This is really clever!

‘Start-Up Level’ and ‘Maximum Level’ do as their names describe, while the pre-amplifier also lets you change the standard input names that are displayed on the front panel — eight character limit. And you can dim the display to 75%, 50% 25%, or off completely, leaving on only a small blue LED.

The first music that we heard delivered by the Gryphon Essence Pre/Stereo was from ex-pat Daniel Thorne, his first solo album, ‘Line of Sight’. On the last track Fear of Floating, we can never quite get over how realistically Thorne’s sax is recorded, and when we listened to it with the Gryphons we heard it more realistically than ever before. As for the Gryphons’ ability to sound-stage, for that we used Thorne’s spooky Pyriscience, and the absolutely grounded way the Gryphons delivered its continuous bass sound while simultaneously suspending the almost supra-audible high-pitched keening treble was an object lesson in control. When we closed our eyes we found that the eerie soundscape was almost surround-like in its ability to envelop us in sound. Truly amazing for both the track and the amplification chain.

Piano is a great revealer of sonic inadequacies, and you won’t hear any sonic inadequacies at all if you audition Jon Hopkins’ extraordinary third studio album, ‘Insides’. Even if you don’t know him, you’ve probably heard his collaborative work, for example on Coldplay’s ‘Viva La Vida’ which features Hopkins’ song Light Through the Veins. 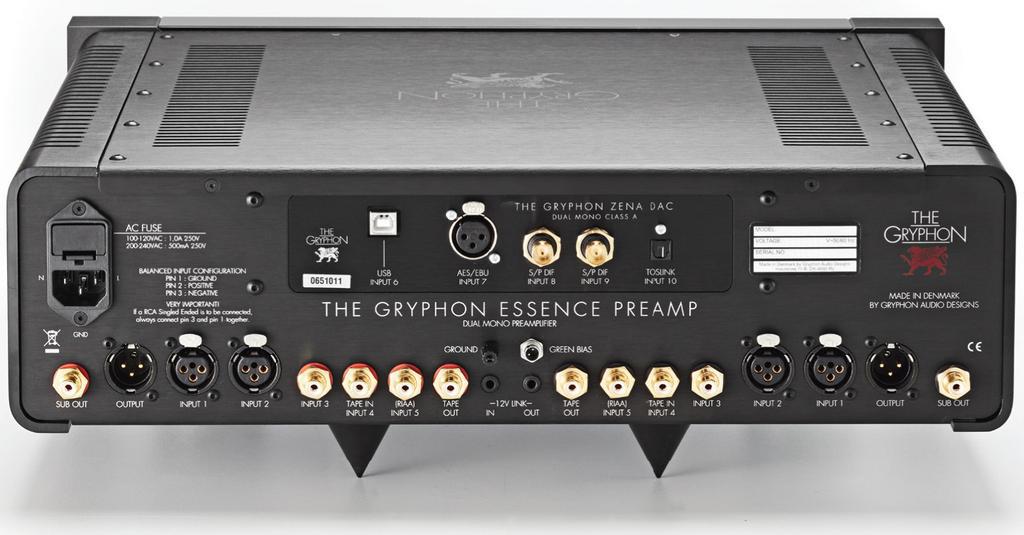 Light… is also one of the tracks on ‘Insides’, but do make sure you listen to Vessel, with the overdubbed piano and the house music. As well as listening to the piano sound across its octaves, you’ll also be able to hear the tonality of the performance of the Gryphon (and stretch the capabilities of your loudspeakers) as the music digs deep into the lowest frequencies. You can also admire the clarity of all the buzzes, beeps and sound effects as delivered by this Gryphon pair.

If you audition the Gryphon duo with a more conventional piano and pianist, such as Australia’s own Stephanie McCallum, you’ll find the same applies. As you’d expect of her, her piano, her piano tuner and ABC Classics, the sound quality on this album is as glorious as her performances of all the works on it, and the Gryphons revealed to us the intimacy of the recorded acoustics, the sonorities of the piano, and the delicacy of her playing, all of which enabled us to reach that Holy Grail of hearing the very essence of the music.

Over the course of our listening sessions we tried the Gryphon’s various bias settings and can recommend that if you use these as a pair, you should most definitely avail yourself of the ‘Green Bias’ setting, but if you are using the Gryphon Stereo on its own, then the ‘High Bias’ setting is the one to go for — if you make sure there’s adequate ventilation to take care of the inevitable heat buildup; the power amplifier gets very hot.

Gryphon goes into many technicalities when it’s describing how its amplifiers are designed, and how those designs are executed, but there’s no single individual element that can explain why these particular amplifiers perform at the spectacularly high level that they do.

And perhaps, like the very best magic tricks, we should not even be wondering about how they do it, much less try to explain it. So to help preserve the magic that is the Gryphon sound, we shall say no more. 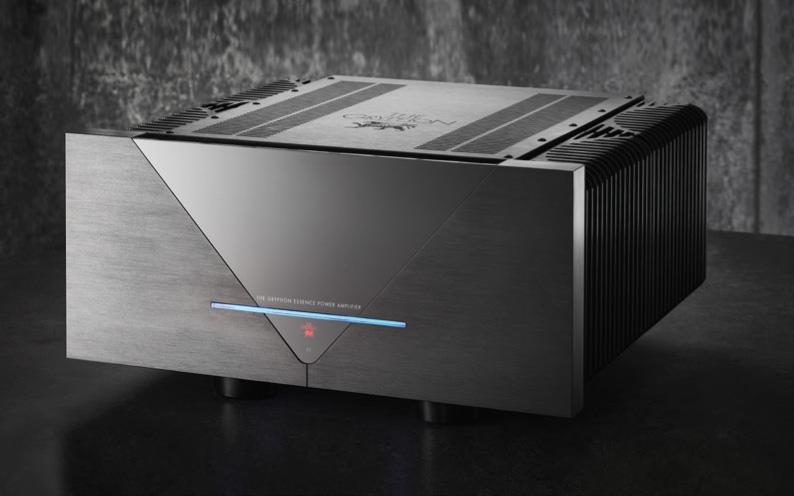