Copland joins the ranks of the do-it-all’ amplifier category with a hybrid model that has Ed Selley absolutely smitten. Read our Copland CSA 100 Review.

It’s been an unusually prolific period for Copland. Normally, new products arrive from the small

Danish concern at about the same frequency as close passes with comets. In a little over a year, however, we’ve been treated to the sublime CTA 408 valve amp (HFC 450) and now, it’s been joined by the CSA 100 you see before you. This represents a considerable number of firsts for the company and delivers a very compelling specification indeed.

Most notably, unlike the Copland amplifiers that we have featured in the magazine before – all valve designs – the CSA 100 is a hybrid offering that cunningly combines a preamp that utilises a valve circuit with a solid-state power amp stage. The actual level of valve involvement in the preamp isn’t that high with just a solitary Electro-harmonix 6922 dual-triode in the circuit. Copland has always viewed valves as a means to an end of achieving the performance the company wants rather than something that it feels obligated to include, and that continues to be very much the case here.

The power amp is a MOSFET design comprised of bipolar transistors. This is the first time that the company has combined these with valves in the same chassis as previous Copland

hybrids have gone down the JFET route. The CSA 100 produces 100W into an 8ohm load and this figure rises to 180W into four. While none of the Copland valve designs I’ve tested have felt underpowered, this should ensure there is very little the CSA 100 won’t be able to drive.

This power is made available to a wide selection of inputs. There are three RCA line-level and a single XLR balanced input, which are partnered with a moving-magnet phono stage (that is descended from the lovely example featured in the CTA 408, although it is op-amp rather than JFET based) and a single tape out and variable pre out. The CSA 100 adds a selection of digital inputs too. Making use of an ESS9018 DAC that is also used in the Copland DAC 215 (HFC 418), this adds an optical, coaxial and USB input to the roster. AptX HD Bluetooth is also available as an option. At a stroke, it means that the CSA 100 is much less dependent on source equipment to form a complete system than a number of rivals at the price (see how it compares boxout, opposite). The connectivity is finished off by a headphone amp fitted with a 6.35mm jack socket on the front.

All this functionality is tied together in a usefully cohesive way. The CSA 100 uses the same input selector system that is present on previous Copland amplifiers and this can be selected via the front panel rotary control or the supplied remote handset. The addition of the digital inputs has necessitated a smaller separate selector, positioned to the left of the main source dial, but it’s far from onerous to use – particularly as I imagine most people are only likely to hook up a single digital input anyway.

Your general disposition towards having to interact with the front panel will be helped by the amp itself coming across as beautifully finished. The CSA 100 does without the horizontal strakes of Copland’s larger products and the result is a very clean and attractive amplifier that benefits from precise and wonderfully tactile controls. There’s no sense pretending that it is cheap, but I cannot see many people unpacking it and feeling short changed with how it looks or feels. This is further enhanced by the inclusion of a small but equally well-made rubber-edged remote control that will also operate Copland’s CD player and connections and other parts of the chassis all feeling as solid as the points of contact. I think it looks its best in the silver finish, but a black version is also available should this be a better match for your setup.

Given that Copland’s all-valve amps don’t exactly sound stereotypically ‘valvey’, it should not be a huge surprise to find that the CSA 100, with a solitary tube to its name, gives few immediate pointers to its presence. Connected to Focal’s Kanta No1 speaker (HFC 454) and taking a USB feed from a Roon Nucleus + (HFC 439), which negates any need to use USB drivers, it turns in a presentation that manages to tread a very fine balance between controlled refinement and performative energy.

Listening to a 24/88.2 download of The Police’s Outlandos d’Amour shows this off to great effect. Even in tarted up form for the hi-res release, it’s still a fairly thin and edgy piece of mastering – but here it feels fuller, weightier and altogether richer than it can do on other equipment. Crucially, the methods by which this happens don’t interfere with the energy of the music itself. So Lonely still pounds along with the required urgency and there’s no hint of it sounding sluggish or soft. The Copland is not the most ballistic sounding device you can pick up for the money, but it never goes so far as to sound in anyway slow.

Give it a more polished recording like Sarah Jarosz’s World On The Ground and the integrated really starts to shine. The implementation of the ESS DAC into the wider presentation is really very effective because of all the benefits it can offer; superb detail retrieval and excellent tonal accuracy to name but two qualities realised without the slightly sterile edge that can sometimes be part of the package. The wonderful I’ll

Be Gone is delivered with Jarosz’s emotive vocals locked to the centre and the supporting instruments sounding crisp and realistic in a believable arrangement around her.

The Copland also has excellent bass response. It thunders through the title track of Orbital’s Monsters Exist with real energy and venom. It manages to extract everything I would expect to hear from the Focal and a little more besides without losing the detail and control it exhibits over the upper registers. No less importantly, the integration with the higher frequencies is very good indeed as effects slide down into the bass in a wholly convincing manner.

Something that also manifests itself is the impressive three dimensionality

that it creates. Without ever sounding diffuse or vague, it manages to take any recording I throw at it and find space and depth that is not always present when listened to on other devices. This part of the CSA 100’s performance seems to be a function of the preamp rather than the digital

stage. Connecting a Chord Electronics Qutest (HFC 436) in lieu of the digital inputs still results in a performance that extends comfortably beyond the confines of the speaker cabinet.

The presence of the Qutest also serves to confirm that the digital board is up to the task of keeping DACs in this sort of price bracket honest. There are pros and cons to the performance of both the Qutest and the Copland, but it would be fairly tricky to suggest one is decisively better than the other. The presentation of the CSA 100’s digital board is more attuned to the overall tonal balance of the amp section as befits something where two elements have been designed to work together.

The phono stage is a genuine delight too. Equipping a Rega Planar 10 (HFC 456) with a Nagaoka MP-200 moving magnet cartridge (HFC 434) and connecting it to the Copland results in a truly invigorating partnership. First up, the basics are all covered off nicely. There is no unwanted noise at any remotely acceptable domestic listening level and it is completely free of hum and interference. It then builds on these fundamentals with a presentation that takes all the virtues of the digital side, but – possibly as a result of the generally propulsive nature of the Planar 10 – with a bit more bite and drive to it. It handles the remastered version of Peter Gabriel’s Up with 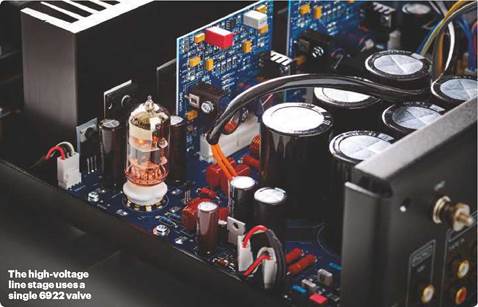 tremendous assurance. This is a phono stage that is more than up to the job of being used on a daily basis and not having you wish for an external design at any stage.

In direct contrast, the built-in headphone output is merely a good performer rather than a truly great one. It has plenty of gain and manages to deliver the same balance of refinement and energy, but some of the spaciousness seems to have fallen by the wayside. It’s more than capable for occasional use, though. It might be seen as a finishing touch to an amplifier that barely puts a foot wrong otherwise.

The CSA 100 is a rare beast in hi-fi terms in that it manages to be almost absurdly competent, but never feels dull or soulless in doing so. There’s nothing within the extensive specification that feels anything other than exactingly thought out, but beyond that it rarely fails to delight across its many inputs and a very broad spectrum of music. Throw in the superb build and rather lovely appearance, and you have an absolutely outstanding amplifier that’s likely to delight anyone who spends any time with it

The Copland is the same price as the Naim Supernait 3 (HFC 456). Both are superbly built and have excellent MM phono stages. The Naim is the more dynamic of the two; it hits harder and delivers uptempo music with more drive and panache. The Copland is more spacious and detailed in its presentation. Both are superb, but the fact the CSA 100 needs less in the way of supporting source equipment is very appealing.

$399.00
Added to wishlistRemoved from wishlist 0