It’s the lowest model in this B&W subwoofer series, yet not the smallest. Read our BOWERS & WILKINS DB4S Review.

The DB4S proves a fine filler of lower frequencies for both movies and music, with all the advantages of smart app control. 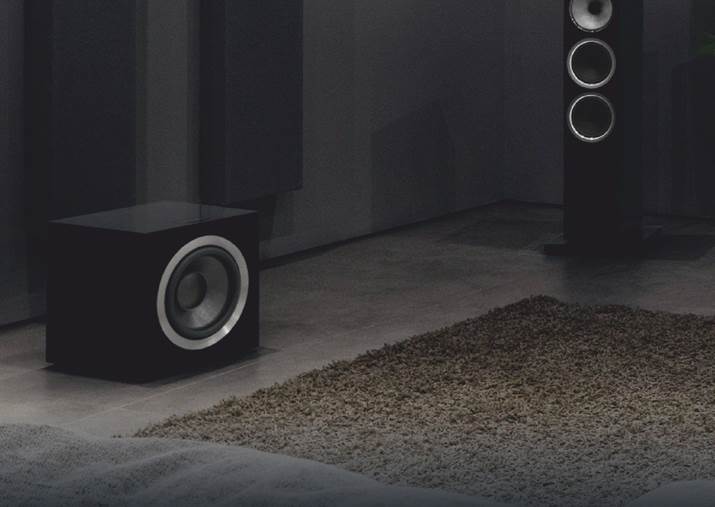 B&W’s latest DB Series subwoofer, the DB4S, is something of an enigma. Although the lowest-priced model in the series, it’s not the smallest. So does it have the smallest bass driver? Nope, its low-frequency driver is actually larger than the model in the range that’s ‘above’ it. So maybe it has a lower-powered amplifier? Again nope. With a rated output of 1000W, its amplifier has exactly the same rated power output as two other models in the range (though only half that of the range­topping DB1D, rated at 2000W). But what the new DB4S does not have is the ‘dual balanced’ low-frequency driver configuration that’s an integral part of the design of the DB1D, DB2D and DB3D models.

As you’ve probably gathered, the DB4S subwoofer is something of a surprise appearance in B&W’s long-running DB range. The three subwoofers above it have followed the usual arrangement of cabinets scaled down in size with each successive model. So the top-of-the range DB1B has a volume of 81 litres, the DB2D a volume of 59 litres and the DB3D a volume of 34.5 litres. We were expecting the DB4S to be even smaller again, but in fact it is larger than the DB3D, with a volume of 50 litres.

A clue to the enigma lies in its model number. The three other subwoofers are all double-driver subwoofers, fitted with two low-frequency drivers working in what B&W calls a ‘dual balanced configu­ration.’ This is where the ‘DB’ comes in… or so we previously thought.

Now it appears that it’s the ‘D’ at the end of the model number that signifies there are two low-frequency drivers in the cabinet. So although this new DB4S is a part of B&W’s ‘DB’ subwoofer range, the DB4S has only a single driver. And that single driver is actually larger than the driver in the DB3D. In fact, it’s the same driver that’s used in the DB2D: a 250mm diameter Aerofoil-coned unit.

The trick here is that with a diameter of 250mm, the driver in the DB4S has an effective cone area of around 490cm2, and it’s this figure (along with the driver excursion) that dictates how effectively the driver will deliver bass frequencies into your living room. Because the DB3D has two drivers, the total cone area is around 628cm2, so it can actually push more air than the DB4S.

B&W is one of the few manufacturers in the world that makes its own subwoofer cones, and the one in the DB4S is a beauty! The cone is made from a material B&W originally developed for its flagship 800 Series Diamond loudspeaker. The construction of the cone is very similar to that originally used for B&W’s ‘Rohacell’ cones, which sandwiched a foam core between two skins of woven carbon-fibre; however, unlike the ‘Rohacell’ driver, whose foam core is the same thickness everywhere across the cone, the core in the ‘Aerofoil’ cone is not constant over the cone’s diameter, but varies depending on the distance from the point at which it attaches to the voice coil former. In fact the curvature is not dissimilar to that of an aeroplane wing — no doubt the reason B&W calls them ‘Aerofoil’ drivers.

Driving this cone is a custom version of a 1000W Class-D amplifier from Dutch amplifier specialist Hypex, whose Class-D modules can be found in a great many of the world’s most famous amplifiers… and powered subwoofers. The founder of Hypex was Bruno Putzeys, sometimes called the modern ‘father’ of Class-D design due to his designs both for Hypex and for Philips, where he worked prior to founding Hypex. Putzeys was the first to best-solve the problems that prevented Class-D amplifiers being used in high-performance products, even though the concept had been around since 1958. Because of the many myths that surround Class-D, we should point out that the ‘D’ in Class-D does not stand for ‘digital’. In fact all Class-D amplifiers are analogue amplifiers, and when properly implemented (and here we must stress ‘properly implemented’), Class-D amplifiers have many significant advantages over the more usual Class A and Class AB, such as higher power output, lower power consumption, higher thermal efficiency, smaller physical size and more.

If the B&W DB4S is sounding pretty special so far, wait until you read this next bit. It does not have any physical controls. Take a look around the back and you’ll find a pair of balanced inputs (via XLR), a pair of line-level RCA inputs (which are labelled as ‘phono’, but no, you cannot connect your turntable directly to these), a pair of 12V trigger inputs, for remote switching operations, an RS-232 connector to facilitate the DB4S being used in remote-control home automation systems, and a 240V input socket plus an associated standby button. That’s it. There’s no volume control, no frequency selector… none of the controls you’d normally expect to find on a subwoofer… except for a single mains power switch with a chameleon LED on it that glows red for standby and green when on.

Despite the paucity of controls on the subwoofer itself, owners will have total control over the DB4S, because all functions are accessed via your mobile phone, with B&W providing the necessary apps for both iOS (Version 10 and later) and Android (Version 5 and later) phones. As well as ‘total control’ (over volume, crossover frequency, phase, high-pass filter slope and more), B&W’s app also allows you to use your phone’s microphone to help adjust the frequency response of the subwoofer to best suit both your listening room and your main speakers. If you don’t like the calibrated response, you can use the built-in five-band equaliser to adjust the sound to your liking, maybe by adding a bit of extra ‘kick’ in the ultra-lows. And if you’d rather not fuss around with calibration, you can also use the ‘ready to roll’ response to which the DB4S defaults. Settings are stored in memory, so you don’t lose one when you switch. you can always switch back if you prefer — or switch between them depending on whether you’re listening to music or a movie, or to different types of music and movies.

However, there’s a much easier way to have settings that switch between, say, music and movies, because if you connect, say, your hi-fi amplifier to the XLR inputs and your home theatre receiver to the RCA inputs, then you can program different settings to be used for each of them. Very neat!

Although both iOS and Android phones can be used to operate the DB4S, the auto­calibration process is (at the time of writing) supported only in Android by the following phones: Samsung’s Galaxy S7, S7 Edge, S8 and S9, and Google’s Pixel & Pixel 2. If you don’t have one of these, B&W suggests that, since it only needs to be done the once, you borrow a compatible phone to do the calibration, then use your own phone for day-to-day control.

The DB4S is available in a number of different finishes. It comes in B&W’s usual superb piano lacquer finish in either gloss black or gloss white, plus it’s also available in a real wood Rosenut veneer. And, whereas once B&W’s DB-series subwoofers came with only a black grille, you can now choose between black or grey.

One advantage of having only a single bass driver, no bass reflex port and no requirement to access physical controls is that of all the subwoofers in B&W’s DB Series, this new DB4S is the easiest to position, not least because you can push it right back against a wall. But we’d recommend you at least evaluate all the ‘best’ positions by using the article at www.tinyurl.com/WHFsubsetup, and put your DB4S in one of the recommended positions before running B&W’s calibration process. Equalisation is a great tool, but it’s not a universal panacea. And, as with all subwoofers, it’s best if the subwoofer is roughly in the same plane as your left and right speakers, or behind that plane.

Calibration will be much easier if you are integrating the DB4S with other B&W speakers because presets for most of these are pre-programmed into the DB Subwoofer app. If you’re not using B&W speakers, you have to choose the ‘Other Speaker’ setting, which allows you to set low-pass frequency (25Hz to 150Hz), crossover slope (12 or 24dB/octave) and phase (0-270°). All this should be done before you run the calibration.

We auditioned the B&W DB4S with stereo music that covered everything from Beach Boys to Beethoven, and in multi-channel using movies that included comedies, period dramas, science fiction and action. We also partnered it with several different loudspeakers that included a pair of small two-way stand­mounters and a largish pair of three-way, four-driver floorstanders.

No matter what we played through it, or which speakers we paired with it, we were entirely satisfied with the performance of the B&W DB4S. It delivered rich, full-bodied bass throughout our sessions, and showed no signs at all of overload even when played more loudly than would usually be warranted in a home environment. We could not hear any distortion when listening at any sensible volume level, and the DB4S’s frequency response was as smooth as silk, being even and controlled with no undue emphasis on any specific region of frequencies. It was all just smooth, controlled bass from the lowest audible frequencies up to where the main speakers took over the sonic responsibilities.

The B&W DB4S is a lesson in the swings and roundabouts of subwoofer performance. In building this new DB4S, B&W has been able to deliver a budget-priced subwoofer whose performance comes very, very close to that of its fabulous DB3S, though to take advantage of the significant cost saving, you will need to accept that the cabinet is larger.

But the cabinet is not all that much larger, and B&W’s finishes are so attractive you’ll likely be proud that it’s a part of your room’s decor. And while you can potentially get a more extended bass response and higher volume level from the larger models in B&W’s DB subwoofer range, you will really only be able to take advantage of this potential if your room is much larger than the average Australian lounge room. Without any shadow of a doubt, the DB4S is yet another great design from the company.

•   Requires a phone for set-up

£329.00
Added to wishlistRemoved from wishlist 0