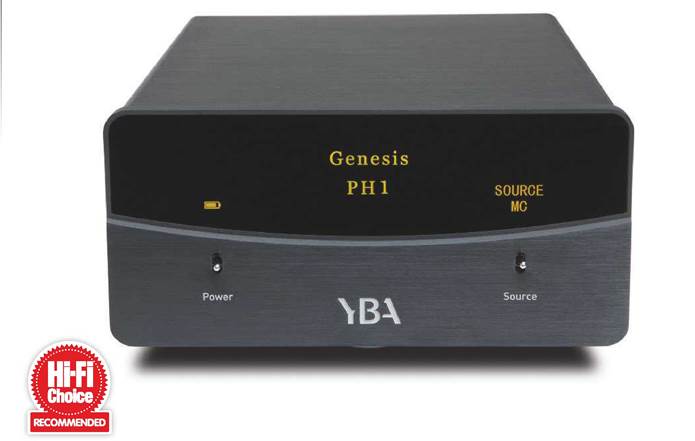 Although not known for my soldering iron skills, I’ve dabbled in DIY – especially in my earlier years of hi-fi addiction. Before I became a scribe, I managed to destroy a number of perfectly good components by ‘modifying’ them. I now know that whatever my talents may be, they don’t extent to re-engineering consumer electronic devices. Yet it was a fascinating learning curve, even if my greatest lesson was to stop messing around. My second greatest, perhaps, was the effect that battery operation had on phono stages, as I built a ‘Heath Robinson’ rechargeable battery platform to power an ageing eighties Hart Electronics MC stage.

It made a huge difference. I can still remember how much better the sound was. Working off batteries stripped away a cloud of noise that dulled the senses and took all the fun out of music. As soon as you put the mains back on things sounded brittle, two dimensional and mechanical. So it was with great interest that I came across the YBA Genesis PH1, which is far better engineered than my kit phono stage ever was. It’s basically a high-quality phono preamplifier with rechargeable cells that are periodically topped up by the mains and has a host of other audiophile features.

Following the French brand’s 2012 relaunch, we recently saw YBA with its Heritage CD100/A100 CD player and integrated amplifier combo in HFC 437. Designed in France and now manufactured in China, this is an interesting East-meets-West hybrid, and its Genesis PH1 is the company’s mid-market phono stage offering.

At its heart is the op-amp based moving-magnet section, which works in conjunction with a moving-coil transformer. The circuit boards are cleanly arranged internally and give the option of moving-magnet and high or low output moving-coil cartridges, with an auto-sensing system to adjust the settings for the type of moving coil used – as long as you set the rear switch correctly. The transformer is a special design by company founder Yves-Bernard Andre housed in a mu-metal shield, which YBA claims gives 26dB of gain.

The onboard rechargeable batteries need to be charged fully before you can use the unit, lest they develop a memory that limits their life. The manufacturer claims the Genesis PH1 can be recharged up to 10,000 times, with eight hours of listening per full charge. If you don’t use the unit for more than a couple of weeks, you should switch it on and let the batteries cycle, says YBA. This aside, the battery system is pretty much totally invisible – you just get on with using it. Ergonomically it’s really rather good, with a small but fine pitch OLED alphanumeric display telling you the percentage of the battery while charging, which changes to an iPhone-style battery icon when in use. When being topped up, a little lightning bolt icon comes on. Another display shows whether MM or MC cartridges are being used. The overall finish is good, although not as glitzy and smooth as some.

Cue up a record and you’re treated to a clean, open and three-dimensional sound with no obvious nasties. The Genesis PH1 is a neutral and even device. It doesn’t have any obvious bass bloom, but nor is there a searing treble. This goes for both moving- magnet cartridges and moving coils using Audio-Technica’s excellent mid-price VM530EN MM (HFC 433) with a quoted 4mV output, and a mid-market Lyra Dorian MC with a healthy claimed 0.6mV Whichever cartridge is feeding it, the YBA proves even handed yet entertaining.

This is a refreshingly clean and open phono stage, one that sounds expansive, authoritative and musical, yet smooth and organic. Via its MC input, it serves up a big, threedimensional sound. Listening to Sparks’ The Number One Song In Heaven, the soundstage is vast, the detailing impressive and I am particularly struck by the combination of life and vibrancy, together with tonal smoothness.

I have heard similarly priced solid stage phono stages sound impressive, but nothing around of late has matched the YBA’s competence. The lack of mush, greyness and general ‘audio smog’ is quite a thing to hear – yet it doesn’t sound ultra forensic or too incisive for its own good. It doesn’t machine gun detail out at you, but rather invites you to peer into the recorded acoustic. Even the rather compressed Sparks track does this, but it’s all the more apparent with high-quality recordings such as Kate Bush’s Running Up That Hill.

The overall production is superlative and with a great phono stage like this, it unwraps before your very ears. You can hear all the layers of sound, yet the result still seems highly polished and conveys Bush’s eerie vocals to great effect. The Genesis PH1 gives depth and space to a recording that can sound small and quite artificial on the wrong equipment. Inside this, her soaring vocal performance is accorded a strong central image, and the strands of the mix hang back respectfully – giving the sort of presentation I’m more used to hearing from really high-end phono stages.

Tonally, it is highly neutral. It doesn’t add bass bloom down below, and nor does it have that saccharine ‘cream

It sounds expansive, authoritative and musical, yet smooth and organic

puff’ treble you often get from tube phono stages. Instead the YBA gets out of the way, letting the listener hear the striking difference in recording quality between Isaac Hayes’ Cafe Regio’s and The Jam’s Smithers-Jones.

Recorded some time apart of one another, the former is a rich, louche American soul classic recorded at the iconic Stax studios in Memphis, while the latter is a light, spry, low-budget post-punk thrash. The Genesis PH1 tells you this in no uncertain terms, rather than trying to remix The Jam track into Isaac Hayes.

Tonally it’s an open performer, not a million miles from other good op-amp based phono stages – yet its battery operation strips all the edge and fog from the sound, making it seem even

cleaner and more neutral, as well as having bigger boundaries left to right and front to back. There’s more focus, yet if anything, the contrast is turned down ever so slightly because some of the mains-related grain is now gone. This is quite a thing to hear, and even evident with the far less expensive Audio-Technica moving magnet. Here I find myself really enjoying this cartridge in its own right – rather than thinking it is just good for the price. I cue up The Police’s Wrapped Around Your Finger, and am quite beguiled by the delicacy available – even if I can hear that the treble isn’t as effortlessly extended as before. A phono stage that doesn’t draw attention to the imperfections of the cartridge is never a bad thing.

YBA’s Genesis PH1 gives a taste of high-end phono stages, with its battery operation turning an already very good stage into a great one. It reminds me of all the noise that a poor AC mains supply can bring, and the difference is clear to hear. If you’re in the market for a phono stage, the Genesis PH1 is worth seeking out

DISLIKE: Nothing at the price 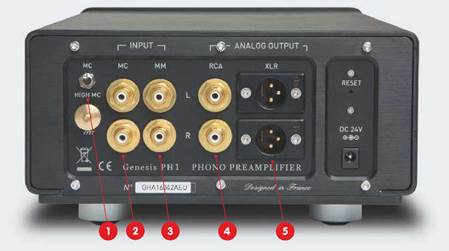 At this price point, there are a few interesting and/or exotic designs around – such as Icon Audio’s tube-based PS1 Mkll MM+MC. At £ this is an impressive performer, with a sweet, open sound that has a big and expansive character. It’s very musical too, with a jaunty rhythmic ability. The Genesis PH1 sounds a little more measured, ordered and cerebral, but there’s no doubting its better detail retrieval and more architectural soundstaging. Either of these two quirky phono stages make a fine listening partner – as ever, you pays your money and you takes your choice…