Our pictures show Wharfedale’s new Evo 4.2 loudspeaker is a compact stand-mounter, one I could lift easily at 13.4kg. 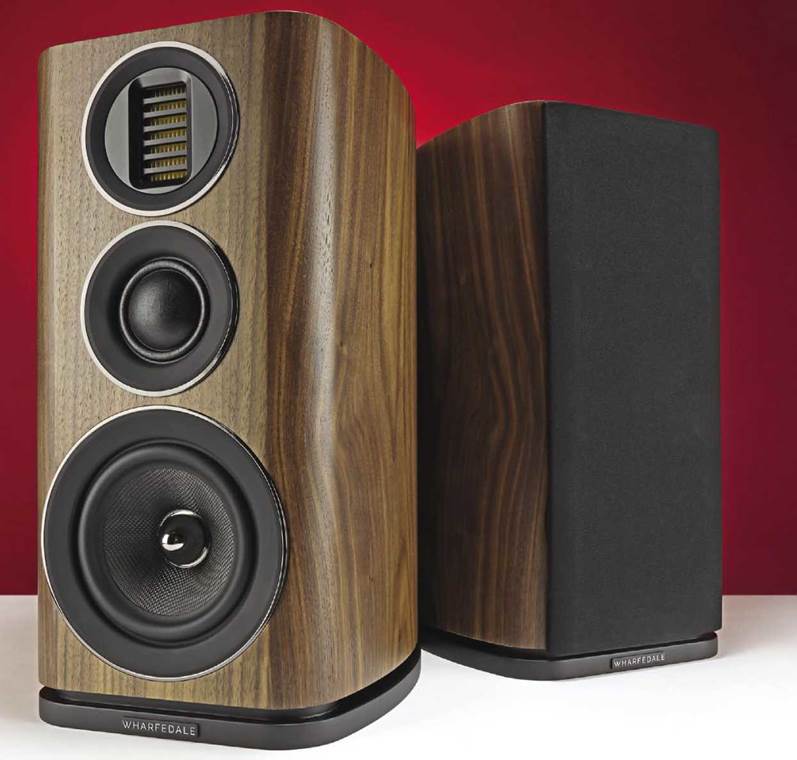 Yet it is a three-way! I was taken aback when I first saw it. Even more surprising was the use of a mid-range dome at centre of the drive unit array, and an air motion transformer (AMT) tweeter at top.

Quite a radical line up – especially for the asking price. So what’s going on here?

I’ll go over the thinking behind it and the sonic implications first, since long ago I started to research use of a dome midrange for very specific reasons.

A dome puts more energy into the room and sounds open, detailed and forward as a result.

Long ago, however, domes had problems. Those I heard gave forward vocals, but with one drawback – sharpness, especially as volume went up. That’s because they have – or had – a tendency to ‘break-up’, especially at high volume. They were popular in studio monitors for engineers wanting everything thrown at them, but for domestic listeners a tad overwhelming. Measurement showed Wharfedale have used a modern design that avoids this old problem.

Alternatively, it could be that Wharfedale prioritised use of a ‘ribbon tweeter’ and found themselves having to use a dome to match it – another problem I faced when designing loudspeakers. Ribbons give lovely treble quality: I’ve always been smitten by them – but they don’t go low, 4kHz being a typical lower limit for 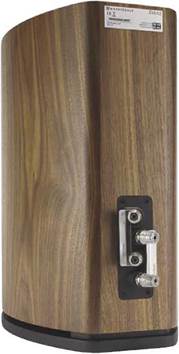 wire links, and a small gap between base and cabinet.

This provides clearance for a down-firing port, the narrow gap providing a measure of acoustic damping.

small ones. The AMT is a folded ribbon in effect and reaches down to 3.9kHz Wharfedale say. The problem this poses is of finding a drive unit that works up to 3.9kHz to match it – and this demands use of a midrange unit. A cone or a dome are options and in the Evo 4.2 Wharfedale use a dome, ‘cos they reach higher.

The Evo 4.2’s bass/ midrange unit must reach up to 1.4kHz to meet the dome and it has a central parasitic dome – the chrome plated item at centre of bass unit cone – to help do this.

Ideally, drive units should be less than half a wavelength apart at the crossover frequency, explaining why they are usually packed together closely. In the Evo 4.2 half a wavelength at 1.4kHz is 12cm and the dome sits around that distance from the central radiating zone of the bass/midrange unit – acceptably close.

So there you are, a brief explanation of the logic behind drive

unit choice in the Evo 4.2. And, providing the drive units work well in themselves, what you can expect to hear from such an arrangement are apparently solid and obvious vocals from the dome, with smooth almost character-free treble from the AMT tweeter. Yes, the AMT tweeters I have heard had less of the sheen of a conventional ribbon, coming over as almost peculiarly “quiet”. I know that’s a funny way of putting it, but really good loudspeakers are drama free – they just let the music through without embellishment. With an AMT expect nothing rather than something!

I admit my description is

general and has flaws. Vocals in particular start at 200Hz (male chest cavity) and have components (sibilance) up to around 3kHz, so a dome ‘mid-range’ (as they are termed) does not cover the human vocal range, only higher bits. But in this line up it does a good job in keeping the drivers all working together in-phase so you get a solid and consistent sound overall.

The loudspeaker cabinet measures 455mm high, 250mm wide and 340mm deep, not including terminals with 4mm banana plugs protruding, for which add 30mm or so. Bare wires and spades don’t protrude of course. The front grille is held magnetically 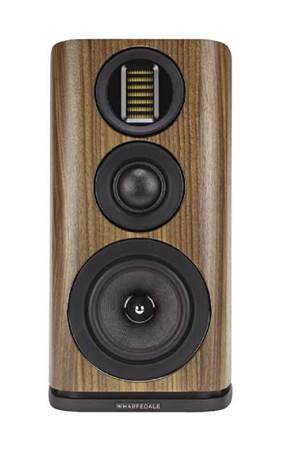 and is acoustically transparent so can be used on or off without affecting frequency response, our measurements showed. The cabinet is solid and quite heavy, but liftable. Wharfedale call it a ‘bookshelf’ design but it requires a large 14in deep shelf, making stand mounting a more likely option.

To drive the Wharfedales I used our Creek Evolution 100A amplifier hooked up with Chord Company Signature Reference cables. A 48 hour run in was needed to smooth the silk dome since it has strong influence. Sources were an Oppo BDP- 205D Universal player to spin CD, as well as process hi-res from an Astell&Kern portable player connected by optical cable, making it fully isolated.

Dave Brubeck’s classic Just Take Five (CD) quickly identified the projective properties of the Evo 4.2, his trumpet standing forward of the cabinets with solid presence. It was smooth edged and free from rasp: I immediately sensed a gentle approach here. And that is how it went, at least in outline. Similarly, saxophone in the Pink Panther Theme was big, fruity and forward.

Holly Cole crooned at me about her station antics in The Train Song (CD) and she loomed large: it was almost embarrassing. The 4.2s project – almost alarmingly at times.

However, whilst treble balance is mild to self-effacing there were occasions the Evos still jumped at me, notably with Willy DeVille’s Spanish Harlem where “It…s” had force in “it starts a fire there”. The dome pulls out upper mid diction but you don’t get high-end spit from the AMT tweeter. Here I understood why domes are used in studio monitors.

Like Dave Brubeck’s trumpet, Willy DeVille had big, firm presence in front of me. Wharfedale have gone a different route with this loudspeaker, but have kept the drive units nicely balanced relative to each other for a tonally balanced sound. The Evo 4.2s will on occasion jump out with vigour though, throwing not vocals but vocalists at you!

As an almost strange counter­balance the refined AMT tweeter is so mild I didn’t get to notice it much. I span Nils Lofgren’s Keith Don’t Go (CD) with its close- miked lacerative guitar work and the strings were solid rather than lacerative, Lofgren’s guitar taking on body, weight and timbral texture . Similarly, Nigel Kennedy’s Stradivarius violin was more big and rich, rather than sharp or edgy, bringing a different character to the sound of most else.

Methinks that here Wharfedale have come to terms with the fact that their potential audience prefer ‘the BBC sound’ to anything associated with Red Bull and Vodka shots. Additionally, the smooth high end doesn’t draw attention to distortion from CD, making silver disc an easier listen.

But the sheer projection of these ‘speakers carries its own challenge. Safri Duo’s Samb Adagio was tightly timed, vivid in its leading edges with volume turned right up but mild up top all the same. This track, which is challenging for any loudspeaker, showed the Evo 4.2s have well controlled bass, not overly heavy in our (large) room of 6550 cu ft. They are meant for a medium sized room, 15ft-20ft in major dimension, with placement close to a wall and in such conditions will match in well, giving fast strong bass.

Playing Tchaikovsky’s Waltz of the Flowers (24/96), from our Astell&Kern AK120 portable, the Bruckner Orchestra took big form in front of me. Opening horns were meaty and sonorous, having conspicuous presence. Strings were smooth and mild by contrast. The performance was clear yet relaxing, no digital nasties here.

Similarly, with the London Symphony Orchestra playing Mars from Holst’s The Planets (24/48) there was scale, a broad sound stage and again a feeling of solid presence. Kettle drum strikes had strength but did not overwhelm.

Wharfedale’s Evo 4.2s are interestingly different and appealed to me. What you get here is solid presence where vocals and solo instruments have power, projection and a sense of weight. What you do not get is sharpness, or edginess: highs are there but refined. At the price these loudspeakers are different and – I feel – ridiculously good. Get a listen if you can.

Our frequency response analysis of the Evo 4.2 shows a broadly flat charac­teristic across the audio band from 40Hz to 16kHz, making the ‘speaker fundamentally accurate. There is no treble lift as is now so common, so no emphasis of distortion harmonics, from CD for example. The sudden dip and peak around 160Hz is due to floor return, so not an intrinsic

‘speaker characteristic. The dome midrange comes in just above 1kHz and its contribution is smooth and well integrated. The AMT tweeter contributes above 4kHz and again its output has been kept in check to avoid treble emphasis. The grille is acoustically transparent, having no impact on these results, so can be left on or off.

Bass extends down to a low 40Hz, the port (red trace) being tuned to 45Hz to add some extra weight in the low bass region. Cut off below 40Hz is sharp as expected for a stand-mount, with no sub-sonics. Also, bass output is restrained for near-wall placement in a medium sized room, helping avoid room boom; this is not a bass heavy design.

Sensitivity was average at 86dB sound pressure level at 1metre, from 1 Watt input. Amplifiers of 60 Watts or more would best suit. Impedance measured a nominal 6 Ohms like most modern loudspeakers, the bass unit having a relatively high motional impedance below 100Hz our impedance trace shows and this likely keeps sensitivity down a tad.

Strong, projective sound with super-smooth highs. Big bodied yet accurate. A “must hear” - especially at the price.