Before the 850 T-5R, a Volvo like this was unthinkable. We challenge its abilities on some of Derbyshire’s finest roads. Read our VOLVO 850 T-5R Review. 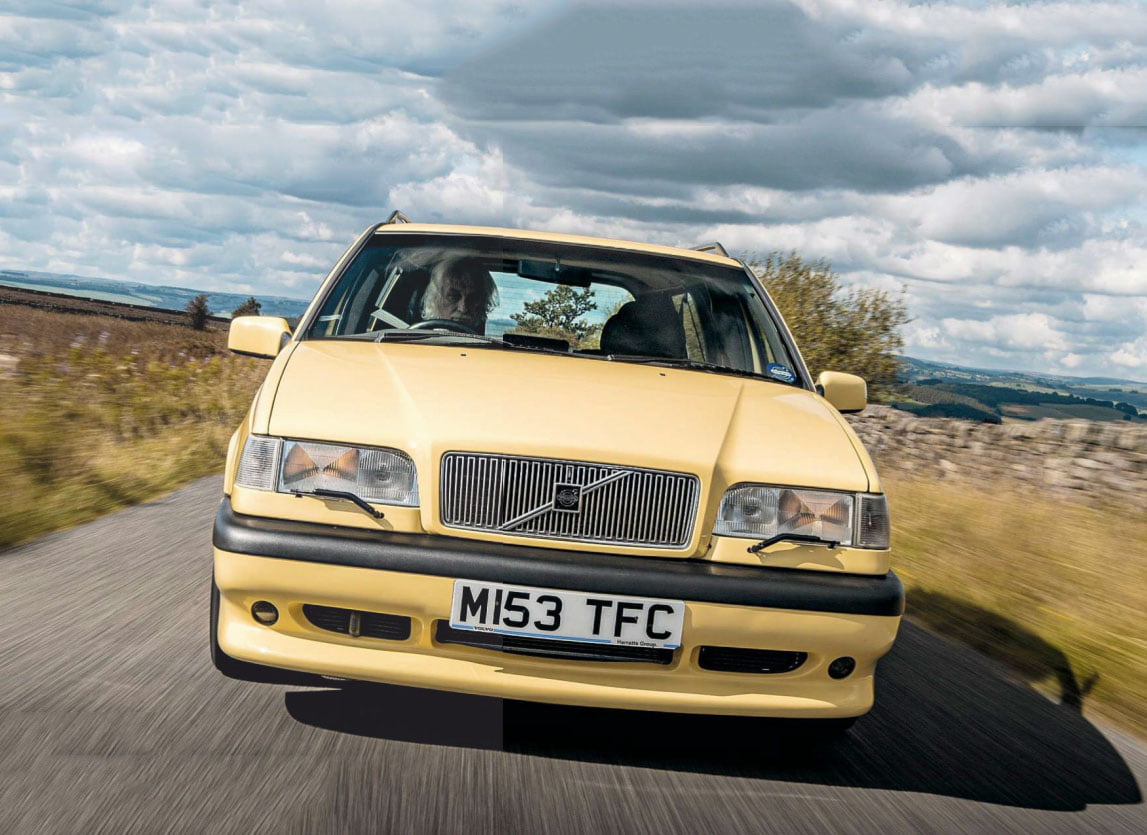 Remember when Volvo was a byword for boring? Back in the 1980s, they did actually try to break out of the boxy straitjacket they had got caught up in, but no-one noticed the 240 Turbo unless they followed the European Touring Car Championship, and the 480ES shooting brake looked like an enticing prospect but never quite provided the sporting drive to match.

In the main, Volvo estates were chosen by austere middle-class families who didn’t own a telly and whose children played very large musical instruments. Volvo was Mercedes-Benz without the flash, Citroen without avant-garde design.

But that dull persona all changed with the 1991 850, despite it being a front-wheel driver. Applying hot-hatch thinking to the suspension and adding passive rear steering meant that even an estate’s bulk could be kept in check, pulling it neatly through the bends irrespective of the number of cellos and wardrobes you were hauling.

In the best Volvo tradition, the 850 estate still looked like a giant housebrick, but its sorted chassis set it up nicely for an increase in power. 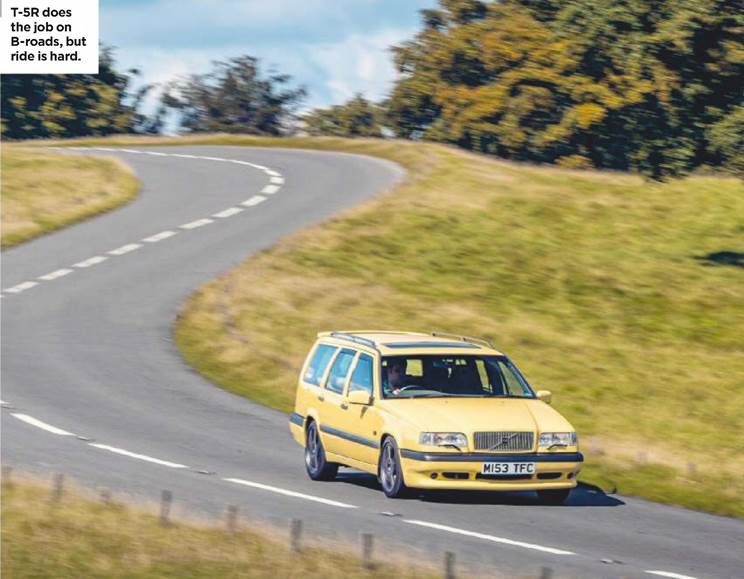 I meet this Cream Yellow Volvo 850 T-5R Estate on the Chatsworth estate, on the edge of the Derbyshire Peak District. I grew up not far from here, indulging in early post-L-plate hoons imagining I was Colin McRae were made on the intricate lanes threading together Hathersage, Castleton, Tideswell and Buxton. They’re fun and challenging in any hot hatch, so if Volvo’s XXL-sized take is any good, it’ll devour them with ease as well.

In a way, the paintwork was as key as the Porsche overhaul that turned the 850 into the T-5R. Volvos had traditionally come in dark, sombre colours or utilitarian whites. The kind of shade usually reserved for extrovert sports cars showed a confidence in the product and showed off the subtler aspects of Jan Wilsgaard’s design. At first glance it looks like a giant box, a trap that’s hard to avoid in a large estate car, but the odd curves around the headlights and grille gave the 850 a streamlined look without losing the Volvo identity.

The light yellow also contrasts nicely with those rear light clusters, showing them off – they may seem passe now that every small hatchback seems to have copied them, but back in the early 1990s these towering fangs of red light were imposing, dramatic and unique.

This was important on the actual car we’re driving because it was the first 850 T-5R Estate many Britons saw. Registered on 15 November 1994 and 16th off the production line, this was Volvo UK’s press car. I drive through Chatsworth estate’s private roads towards the A623 and B6001, tracking the River Derwent towards Hathersage. In the 1980s and 1990s, these roads often formed stages of the Network Q RAC Rally, and would be great fun to take on at speed, but today they’re 30mph.

That gives me time to concentrate on the 850’s driving environment. If you don’t look in the rear-view mirror, it doesn’t feel like a large estate car. The relationship between the heavily-bolstered but still luxurious driver’s seat, smaller-than-usual steering wheel, firmly-sprung pedals and shorter-throw gear lever is distinctly sporty. In overhauling the 850, Porsche didn’t just concentrate on the engine and suspension: they thought about the ergonomics too. The result is a 911-like driving position. The noise is very Porsche too – a deep, hollow howl overlaid with a turbo whistle beyond 2000rpm.

As I jet the 850 down the B6187, through Hathersage and into the Hope Valley, I stretch the T-5R’s legs further, feeling the solid rush of torque billowing past that

Inspired by the Network Q RAC Rallies of the early 1990s, our route takes in moorland, woodland and waterside roads.

The route Making Chatsworth your base, join the A619 at Baslow before heading north at Calver, following the B6001 to Hathersage, the A6187 into the Hope Valley, then the B6049 down to Tideswell. Take the trafficky but spectacular rally-style route to the A6 via the A623, Peak Forest and Sparrowpit before returning via Buxton, or go through Tideswell on the B6049 via valley hairpins. Once you hit the A6, go south via Matlock Bath. If you need to return to Chatsworth, take the A632 back, turning left at Slack.

Why it’s great It’s your own personal rally. Rutted moorland tracks plunge into dark, forested complexes of bends. Upturned cars in fields aren’t an unusual sight near Wheston. Then you’re transplanted to Switzerland. Matlock Bath is the sort of place that feels like it should be at the foot of an Alp. It’s even got cable-cars.

When to go Avoid summer weekends. Early afternoons in winter are a good bet, or wait until after evening rush hour, hit the roads with all lights blazing, and pull into Matlock for a late meal at the Midland pub. 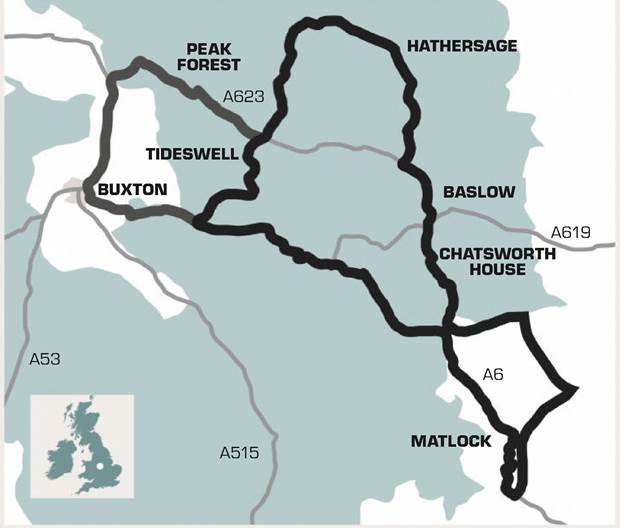 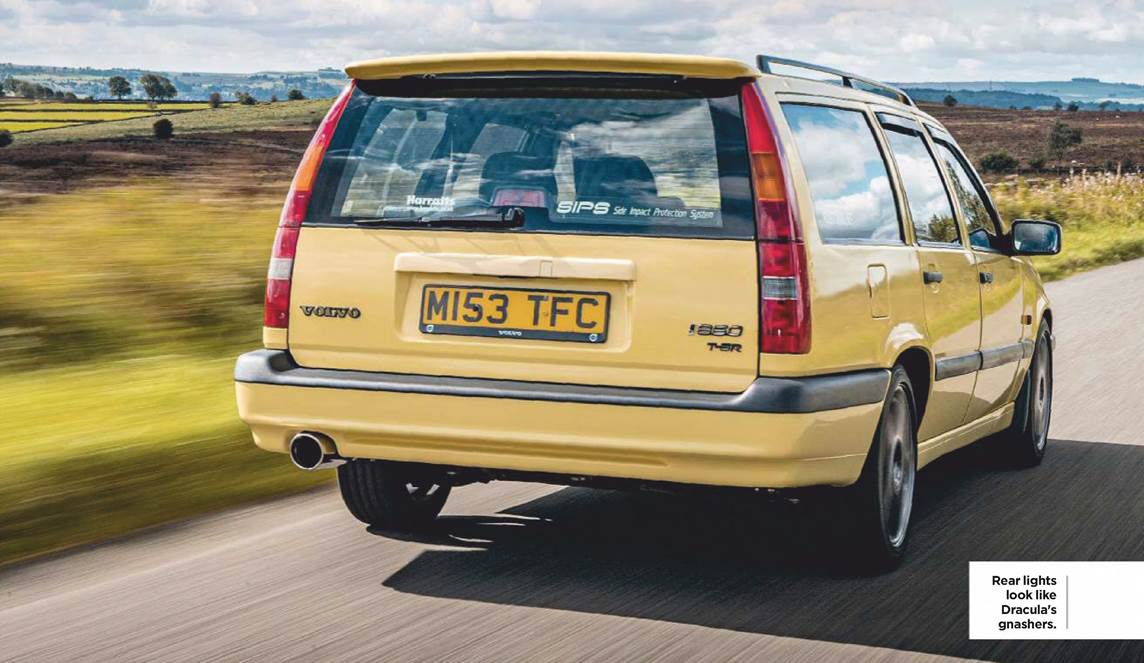 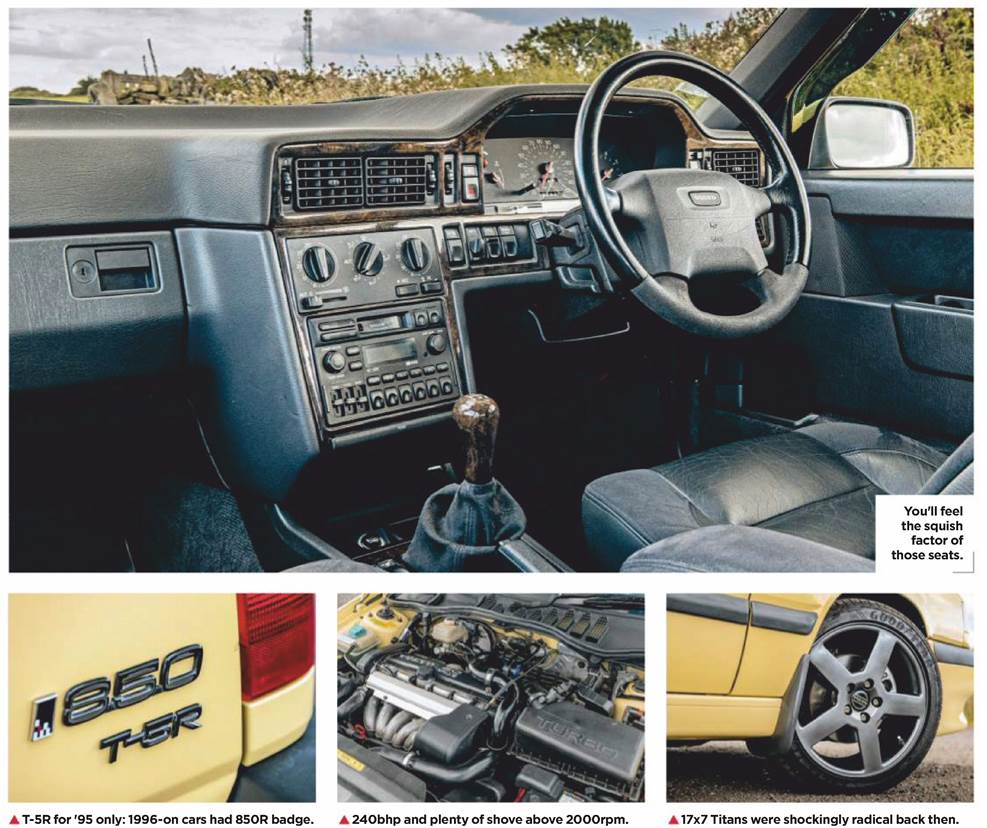 2000rpm mark. It feels strong enough to put the Volvo into 1980s junior-supercar territory, a suspicion confirmed by the contemporary road test figures, but instead I find myself enjoying the way it corners. There’s just enough feedback from the wheel for the 850 to feel incredibly precise, with not much dead-ahead slack. Power assistance lets you feel the car’s weight without taxing your shoulders.

It’s the kind of steering that’s perfect for a grand tourer, interactive enough to let you enjoy the drive but also to take evasive action if you overcook it in a tight bend. Its bulk is well hidden. Only when you look in the rear-view mirror and see how far away the rear windscreen is do you realise you’re in such a large car. 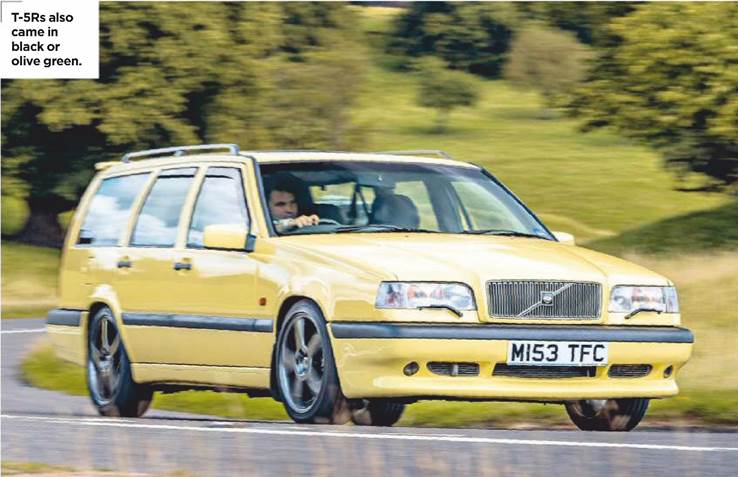 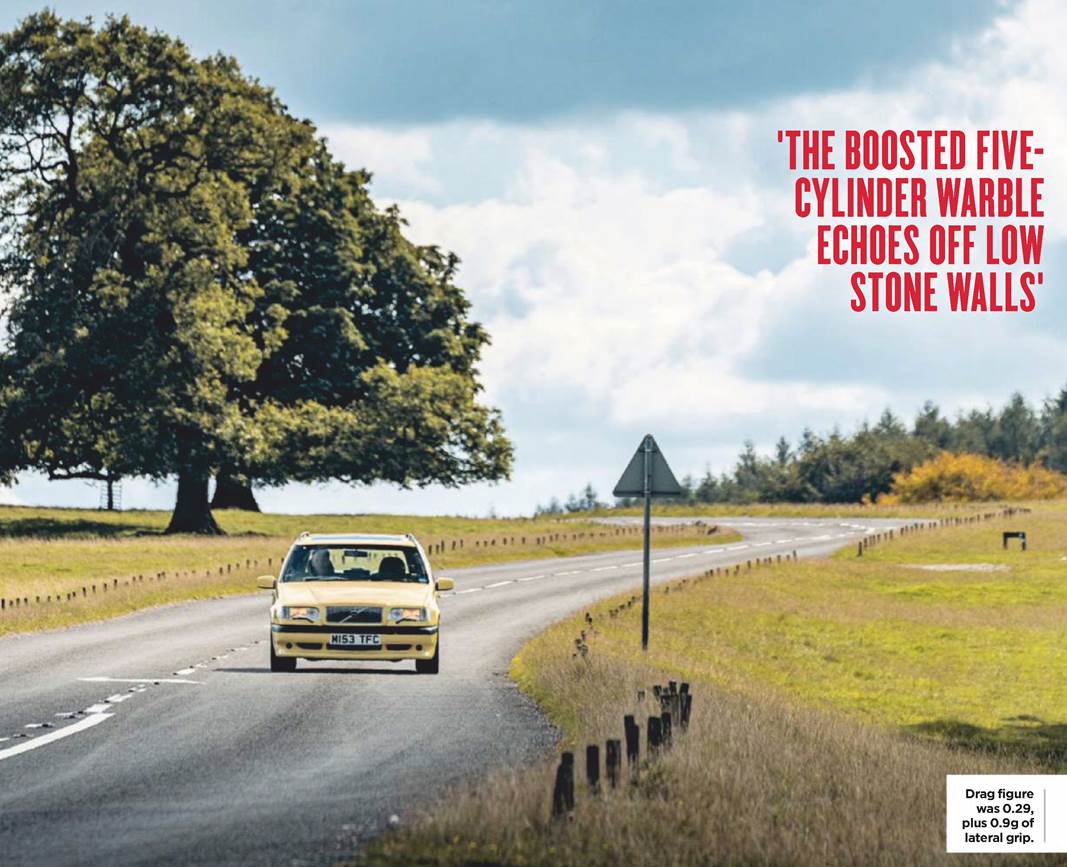 Bradwell, the car never lurches in response to camber changes or threatens to hurl its hefty rear quarters past its front ones. I’m reining in too much over-enthusiasm – 240bhp isn’t too much to mess with – but it’s still doing a very good impression of a giant hot hatch rather than a family hauler. As I emerge from the trees and reach the crossroads with the A623, I’m faced with a dilemma. Do I carry on forward through Tideswell and into a complex of roads that will both entertain and link up the return leg of my road trip, or do I turn right and tackle three of my favourite UK bends? If you head up the A623 in the direction of Manchester, just over the brow of the hill is a wild downhill S-bend that resembles Laguna Seca’s Corkscrew. Keep going, and above Peak Forest there’s a harsh zigzag complex with sighting lines allowing for apex clippage and, at Sparrowpit, the kind of hairpin bend that rally drivers pull the handbrake for. On a road with a 50 limit.

I decide to head through Tideswell. The A623 is great but has a nasty habit of being clogged up by HGVs. Beyond Tideswell, carrying on the B6049 towards Miller’s Dale, I’m suddenly transported to the Alps, viaducts soaring between sheer hillsides and the Volvo’s boosted five-cylinder warble echoing off low stone walls.

But as it climbs out of the valley, the roads get rutted – colliery trucks and farm tractors pass this way – and begin to flag up a shortcoming of the Volvo’s chassis. The price to pay for performance and handling precision in a car this big and heavy is extremely stiff suspension to keep the body under control. It jiggles over any tarmac that isn’t Silverstone-smooth. These rutted roads, taken at speed, will soon send the nose skittering away from where you’ve pointed it if you take too many liberties.

I back off the throttle, but I’m smiling because I know what’s coming next as I

I BOUGHT ONE PAUL WALTERS

‘I bought it in March 2003, and my wife used it as an everyday car – we called it the Flying Banana,’ says Paul Walters of this Cream Yellow T-5R Estate. ‘At the time a friend of mine was parts manager at Speed’s Volvo in Alfreton. He got some information on it and said “did you realise it was the press car?” Browsing eBay, I found the copy of What Car? it appeared in, and decided to keep it. We only ran it for a year before it got laid up. It sat on the drive, getting a bit mossy, when I decided to restore it. It didn’t need much, just new hoses, refreshed electrics and localised respraying on some of the panels. There was no rust at all.’

reach the junction with the A6 and click the tick-tocking indicator stalk to turn left. Keeping that Alpine mindset er… in mind, I take the A6 south towards Ambergate. It might be one of the busiest A-roads in the country, but it’s fast enough for fun, with enough overtaking opportunities if you get held up by some ditherer or a crawling HGV. It’s at this point that the A6 dives into Darley Dale and follows the snaking contours of the Derwent towards Matlock. Mimicking the lacet (‘shoelace’) roads of the Swiss Alps, I’m picking a line between these sweepers as the combination of towering viaducts, mossy edifices and rock walls hems it all in with cable-cars hanging overhead.

This is the kind of drive people will travel thousands of miles to do in something like a Porsche 911 Turbo. And yet here I am, in Derbyshire, en route to the bikers’ hangout of Matlock Bath, with its elegant Victorian architecture, behind the wheel of a Volvo estate with the exact same kind of grin on my face.

Pulling over for a coffee I find myself thinking how miraculous the 850 T-5R estate is. Before it came along, the realities of family life supposedly meant sacrificing sports car fun. Even practical hot hatches were of limited use when they combined a three-door structure with huge standard bucket seats that chomped a big chunk out of the rear-seat legroom.

Randomly, I recall a friend whose petrolhead dad owned a T-5R Estate from new, racing a German-registered 911 over the same roads I’ve just driven in this one, and beating it. Nowadays, just about every manufacturer of big estates – even Skoda – makes sure at least one car in the range is rapid and tidy through the bends. And yet, before the T-5R, did this consideration even cross the minds of Volvo’s rivals?

The racing version of the 850 Estate may not have shone, but it beat every commercial rival on the grid to a much more important finish line. It appeared to do the impossible, and in doing so changed the motoring landscape.

Volvo’s 850 T-5R Estate is a modern classic icon, and rightly so. These well- built, practical cars often led hard lives, but limited-edition homologation-run status meant that T-5Rs tended to get looked after better than most. Decent low-mileage examples go for £20k nowadays, but the remarkably similar cars that followed were a lot less. The 850R of 1996 was less exclusive, with no distinctive Cream Yellow paint option, but it’s just as fast and even more powerful with 250bhp.

Greater numbers brought harder use, heavier depreciation and lower prices. One of the remaining 150 Rs can be had for half the price of a T-5R – but that’s still £10k. The T5, with 225bhp available from fundamentally the same engine minus the T-5R’s overboost function, offers 7.4sec to 60mph and a top speed of 149mph, plus the same neat chassis engineering. They’re less than £5k, even in mint condition.

As these ageing cars are discarded by family motorists, any fast 850 – T-5R, R or T5 – deserves recognition for showing that maximum practicality and maximum driving fun, if engineered properly from the start, can coexist together in the unlikeliest of machines. 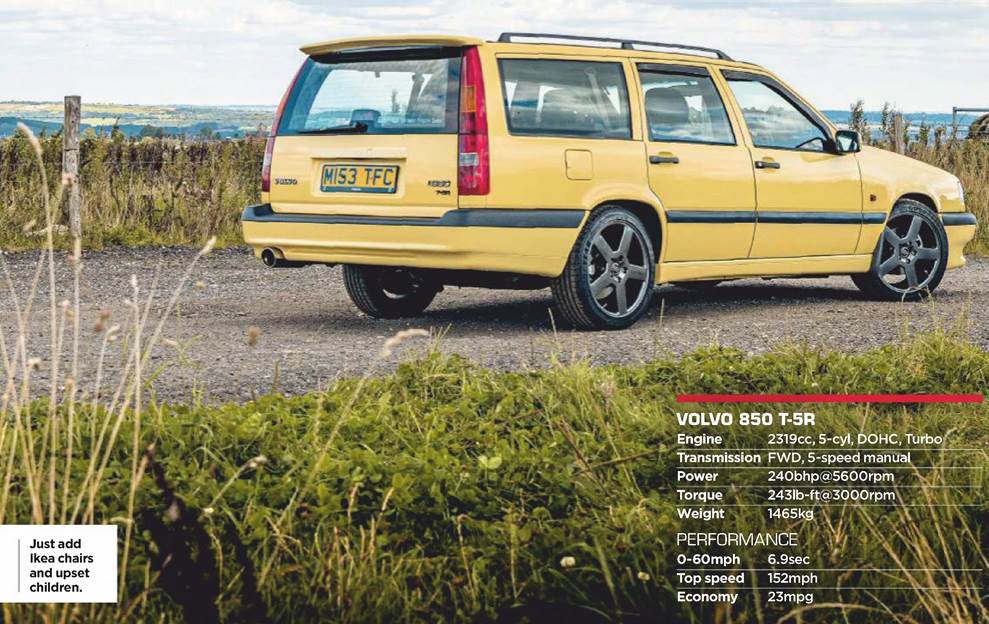