Take one top-notch amp, add a DAC and streaming upgrade modules and the result is the I25 Prisma. David Vivian is impressed. Read our Primare I25 Prisma Review.

There are two types of modern integrated hi-fi amplifier. One has taken the idea of ‘integrated’ to a whole new level, adding a DAC and network streaming to the original pre/power in a box recipe, elevating its status to that of a true system hub. The other remains resolutely analogue with not a digital circuit in sight.

Sweden’s Primare understands this tension between die-hard purists and tech-savvy early adopters very well and its answer is both clever and blindingly obvious. In base form, its I25 integrated amp (last seen in our integrated amp Group Test, HFC 459) is a straightforward 100W design furnished with the company’s own compact and cool-running second generation UFPD 2 Class D amplifier

modules, which utilise high-speed switching rather than linear gain devices (and not ‘digital’, remember).

UFPD stands for Ultra-Fast Power Device, an amplification module in a balanced configuration of four discrete amplifiers – two per channel. Primare is keen to point out that Class D amplifier technology has many inherent advantages, one of which is the ability to locate the heat sink directly on the circuit board within the amplification module, considerably reducing circuit path length and allowing for the power output devices to be directly connected to the speaker binding posts in the process.

There are five line-level RCA inputs and two outputs, plus sync/trigger and RS232 inputs for multi-room use. The I25 thus specified is an analogue integrated amp pure and simple, clean and understated in design and very nicely put together with control actions so slick and tactile they could make the elegant remote redundant.

Primare grew out of Danish industrial designer (and passionate audiophile) Bo Christensen’s frustration with the sound quality, aesthetics and user interface of what he called “typical audio gear”. During the late eighties, he formed a team of like-minded designers, including electronics engineer Bent Nielsen, and formed Primare. Its mission was to design hi-fi of exceptional sound quality, elegance and user-friendliness, and to eschew the industry standard 12-month product life cycle by having the flexibility to evolve in line with technologies and methodologies.

Which is why the I25 has been designed to be modular, with spare room for digital building blocks. They consist of two upgrade modules either pre-installed at the factory or retro fitted as and when: two plug-in steps to full digital functionality. The first is the DM35 DAC module, which links up to the rear panel’s USB and S/PDIF sockets (two coaxial and four optical) and uses the well-regarded AKM AK4497 converter chip enabling up to 32-bit/768kHz PCM and DSD256 conversion. Primare notes that this DAC incorporates a newly developed switched-capacitor filter ‘OSR Doubler’ that is claimed to greatly reduce sound degradation from noise shaping, achieving a flat noise floor up to 200kHz. The DAC module must be in place before the second (SM35) module can join it. It’s the one that gives the I25 I’m looking at here its extra moniker: Prisma.

Prisma is Primare’s digital streaming platform or, as the company has it, the means to enjoy multi-room/ multi-zone connectivity and control for playback of stored and streamed media, wired or wireless, all managed from any mobile device through a dedicated system control app. In addition to Bluetooth, AirPlay, and Spotify Connect, Prisma’s Google Chromecast core in conjunction with Google Home allows direct connection to hundreds of streaming applications. Updates slated for the second quarter of 2020 are a Prisma app for Android smartphones (currently iPhone, iPad and Android tablets are supported), AirPlay 2 and up-front Roon compatibility. Talking of the app, it covers just about everything including input switching, volume control, input sensitivity adjustment, input renaming and multi-room/multi-zone control between other Prisma-enabled devices.

Subtly evolved from previous Primare designs, the spare yet refined

Clarity, speed, grip, strong dynamics, neutral tonality – the Primare has it all

Nordic aesthetic still cuts it. The thick, brushed aluminium front panel, which stands proud of the main chassis by a few millimetres, has a single, lab-style rotary control that can be used for volume or input selection. It’s joined by three small buttons, one activating standby mode and the other pair for menu navigation and configuration. Although wide, the white-on-black OLED display in the middle is only 2cm tall and hard to read from a distance when showing track numbers, though the volume scale is a little larger. Under the lid, things are just as neat and efficient with two and four-layer double-sided circuit boards for shorter signal paths. Surface-mount components are also used whenever possible, again to keep signal paths short. 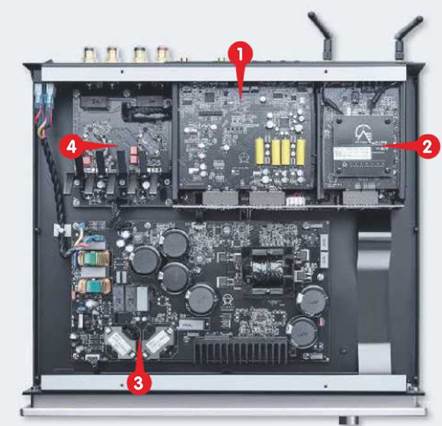 Class D amplification remains a bone of contention among audiophiles, despite the huge gains in consistency and sound quality that have been achieved since the early days. Doubters – perhaps believing, as many apparently do, that ‘D’ stands for digital – could do worse than take a long, hard listen to the I25 Prisma. Yes, Class D still has an identifiable sonic signature, but it’s a far cry from the hard-edged, shiny, bright and off-puttingly chilly presentation of the earliest iterations. We’re not talking the golden glow of valves here, but the kind of transparency that allows the true character of individual recordings to shine through.

Some amps sound great and have fine powers of resolution and separation but show a tendency to homogenise, making contrasts – both bold and subtle – seem more similar than they should. The I25’s sound, conversely, cleaves towards a valued high-end ability to discriminate with meticulous care, not just in broad strokes but also in the finest detail.

James Taylor’s latest album, American Standard, while hardly a stretch for the folksy balladeer and in danger of familiarity overkill, sounds more involving and emotionally invested than you’d credit, simple as that.

Clarity, speed, grip, strong dynamics, neutral tonality – the Primare has all its hi-fi ducks perfectly aligned in a row. But this counts for

little if it fails to communicate the intention behind the playing and, again, we’re back in high-end territory. Irrespective of source – whether streaming the smooth soul of Anita Baker’s Sweet Love on Tidal or playing the densely layered musical complexities of Pat Metheny’s Imaginary Day on CD – the Primare combines impeccable timing with tight focus and a firm grasp of microdynamics, which does wonders for its ability to resolve nuance and inflection. It offers strong in-room presence where performers and instruments are portrayed with body and dimensionality in a truly spacious soundstage.

One of my favourite tracks from jazz fusioneers The Crusaders is Shake Dance, from their 1991 album Healing The Wounds. Its relentlessly funky groove is great but the recording, while crisp and clean, is woefully dry, thin and bleached out – surprisingly so for a GRP production. There’s only so much the I25 can do to ameliorate this and it doesn’t inject as much warmth as a classic tube amp will, but still manages to deliver a plausibly fleshed-out presentation with a still greater sense of drive and depth.

A modern and heavily pumped electro-swing production such as Caravan Palace’s Leena from the album Chronologic is right up the Primare’s street, the amp exhibiting the kind of verve, slam and fulsome yet agile bass the track demands. It also renders the album’s more reflective moments in exquisite detail. There’s no mush or muddle here, no hype or hurry – just balance, control and clarity. If you like a sound that’s fast, open, clean, clear, dynamically expressive and devoid of manipulative emphasis, the I25 Prisma ticks all the boxes.

Perhaps the OLED display could be a little larger. The tonal balance isn’t artificially warmed up, so it’s unlikely to appeal to tube aficionados. Maybe the app, while logically structured and impressively comprehensive, could be a bit slicker. But that’s about it as far as imperfections go. Analogue and digital in graceful harmony? That perfectly sums up the Primare I25 Prisma. Enthusiastically recommended

Both the Hegel H120 (HFC 460) and the Moon Neo 240i by Sim Audio (HFC 430) undercut the Primare by around £ yet offer broadly similar features. With just 50W per channel, the Moon, has only half the power of the Class D I25 Prisma. The Hegel H120, is closer in real-world speaker driving ability with 75W of Class A/B power, but its support of hi-res formats is more basic. Sonically it’s close between the three, but both the Moon and the Hegel sound slightly warmer.