Porsche’s Speedster was built tor sunshine – but can its drive prove just as alluring under the cover of the stars? Read our Porsche 991 Speedster Review. 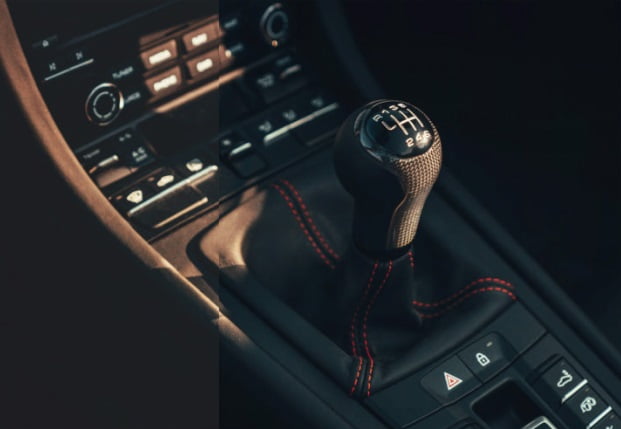 RIGHT The Speedster gets a six-speed manual transmission from the 991.2 GT3 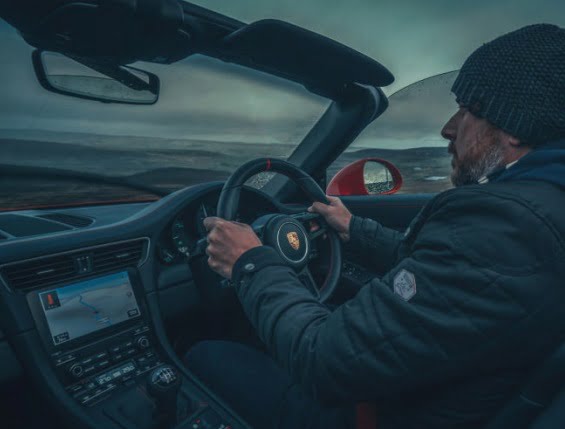 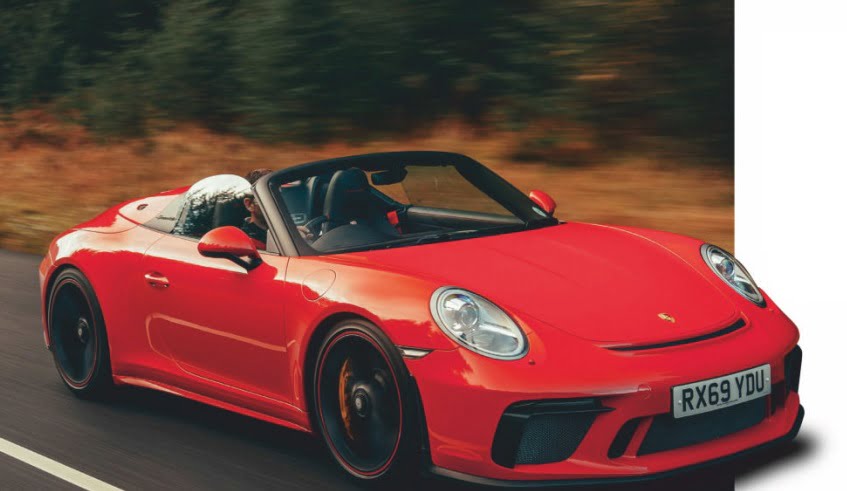 LEFT The hood is technically electrically operated, but you do have to partly unfurl it yourself

There’s no heated seat. Forgivable in a Speedster, particularly given the likelihood being that most, if not all, will be used on warm, sun-kissed days and fitted with full bucket seats. Not this car though, as someone’s ticked the box for Adaptive Sports Seats and saved the £ extra that would have added the possibility to warm them. The winter sun, such as it is in Northumberland, left us an hour or two back, and the digital temperature in the dial in front of me is reading three degrees. It’s dark and cold but, in the absence of the possibility of a toasted butt and back, I’ve come prepared with thermals, a good coat, hat and gloves. Sensible in mid-winter, but given the Speedster’s cabin is, unlike its Cabriolet relation, lacking in buffeting preventing equipment, even more necessary. The Speedster should feel open too, the hood an occasional item, which GT boss Andreas Preuninger admits they considered not bothering with. I’ll be leaving it down, then, just as it should be. 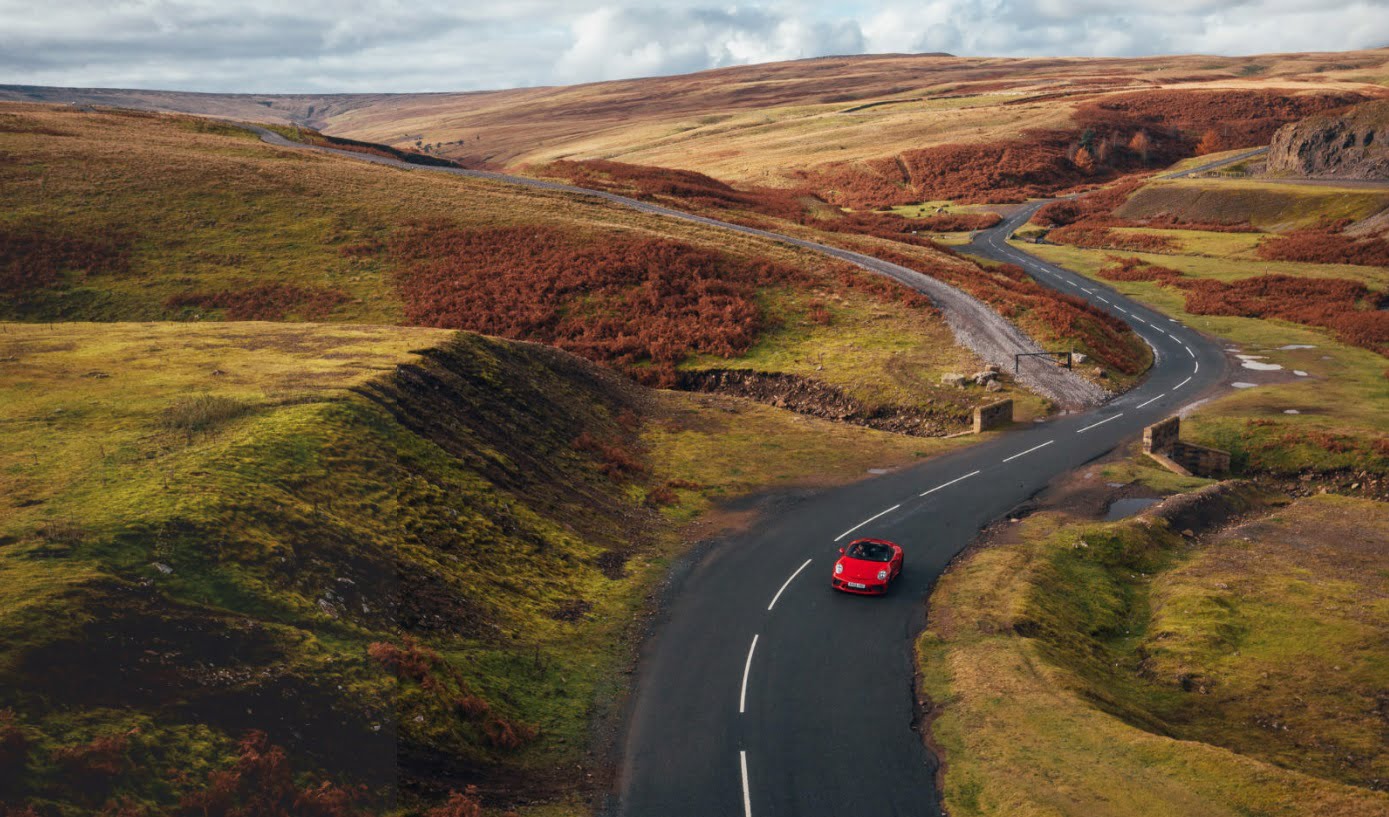 We’re in Northumberland because Porsche GB is celebrating its most visceral open-topped cars, the new Speedster joined by its 718 Spyder relation and a Boxster T The two mid-engined machines are back in the carpark and the other guests preparing for bed. I have other ideas. Photographer Richard Pardon and I have come up with an idea, stealing the Speedster to make a break for the border. It’s a loose plan, my hometown of Edinburgh our destination, simply because it’s there, the roads between it and us are familiar to me and, well, why not? There’s a tenuous Speedster link too – the Cannonball restaurant, the last building before our intended Edinburgh Castle destination, is number 356 Castleview, the first of Porsche’s Speedsters, of course, being a 356. That’ll do. Pardon’s convinced and chucks in his cameras, and we point the red, open car north.

It’s cold but clear when leaving, so an early diversion is in order. Kielder Forest is a few miles away, and it’d be mad not to run through it. It’s a place that’s captivated me since the early days of rushing home from school to watch VHS recordings of Top Gear Rally Report, ‘Killer Kielder’ being the famous stages that more often than not determined the result of the Lombard RAC Rally. We’re obviously not on the gravel forest and fire roads, instead taking the main route through Kielder Forest Park, turning left off the B6320 Pennine Way, through Hesleyside towards Greystead, before tracking around Kielder Water and towards the Scottish border.

Kielder Water might be the largest artificial lake in the UK, and I know it’s over to the left of me, but I can’t see it. Actually, I can’t see much, the reach of the standard bi-Xenon headlights limited in the freakish darkness surrounding us, their reach denied not just by the inky blackness, but the undulating roads that characterise the tarmac around here.

Like the lack of that heated seat, I’m wondering who didn’t tick the optional Porsche Dynamic Light System; it’d be helpful here, and even if you’re not intent on driving it late at night, the dark chrome metallic internal parts and surround look really cool.

It’s little wonder there’s an observatory located in Kielder, there being next to no light pollution in the woodland park. It’s quiet too, except tonight, as the howl of the 4.0-litre naturally aspirated flat six is breaking the silence. The 4.0 is doing a better job of piercing the eerie quiet than those headlights are doing in revealing what’s ahead, the visceral effect of that incredible engine heightened to another level when it’s experienced without any other 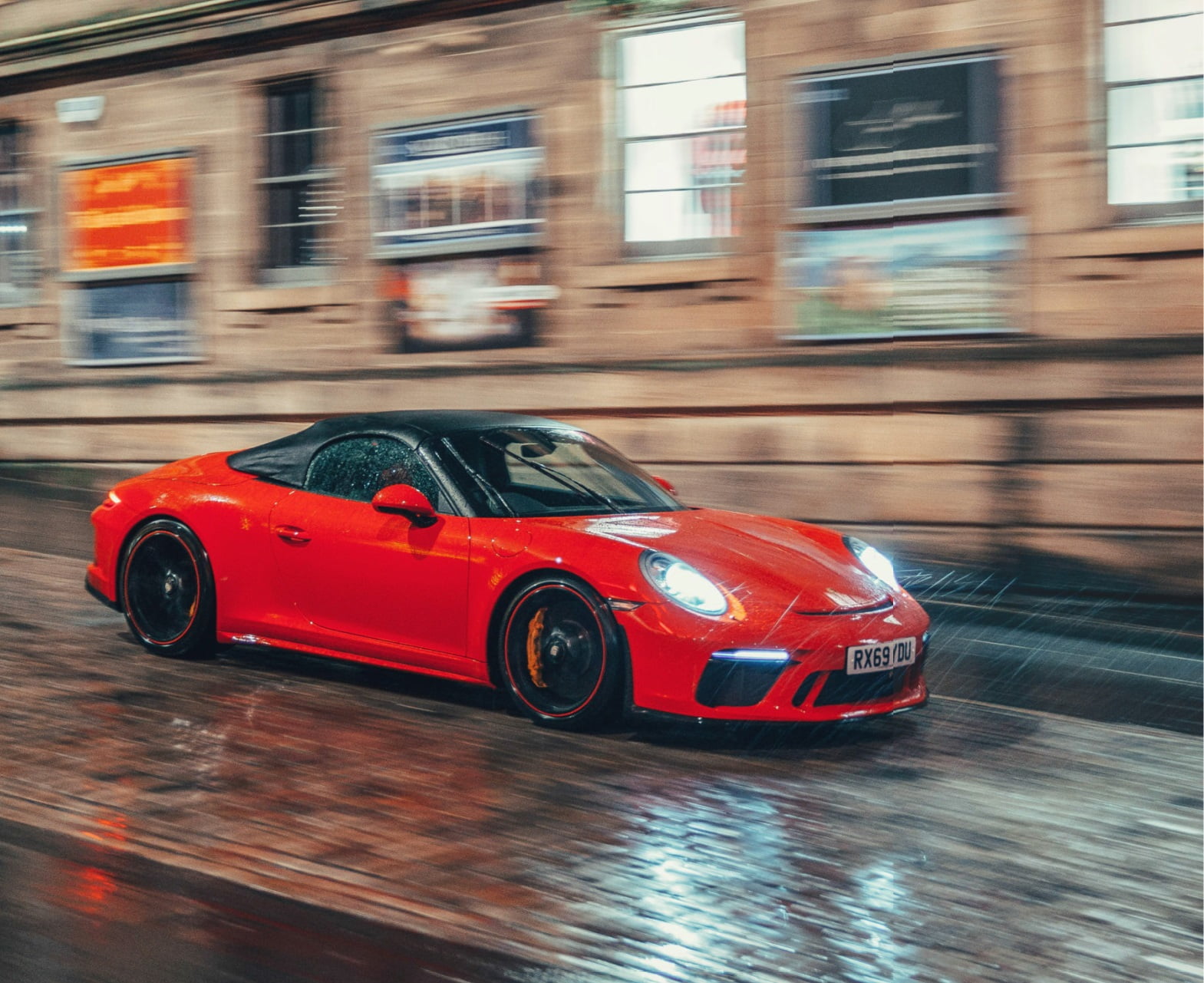 distractions. Just it, the potential for 9,000rpm and the view ahead, as far as those headlights reach. The temptation to wring it out is just too much to resist where, of course, the road allows it.

On its launch it sounded more exotic than any of its 4.0-litre relations before it, the necessary exhaust filters bringing more metallic, higher pitches to its repertoire, which are heightened here without any background noise to mute its tones. Make no mistake, the 4.0-litre sounds incredible. That it’s managed by one of, if not the, finest shifting six-speed manual transmissions to grace a 911 ever, only makes it more rewarding. I’m busy with it, though not through necessity – the 4.0-litre’s impressive urge such that you could leave it in third all day – but because I want to. That, and it begs you to. 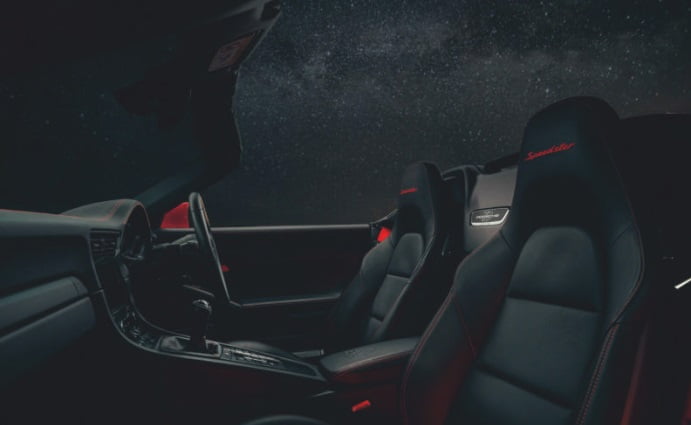 There’s joyous satisfaction in every gear selection, whether you’re going up or down the ‘box. I’ll ignore Preuninger’s advice to me on the launch event in Sardinia to have the Auto Blip on. Yes, as the engineering boss said, “it’s better than me”, but I just don’t care. A huge part of the Speedster’s appeal is in perfecting heel-and- toe downshifts, however good, or not, you might be at it. It feels so natural managing every downshift by rolling over from the brake pedal to blip the accelerator, seeing, hearing and feeling the revs surge enthusiastically while you dip the clutch at the same time and snick the gearstick down a cog. To not do so is to deny yourself one of the most delightful aspects of driving the Speedster.

And the Speedster is, by definition, a driver’s car, one that’s singular in its purpose, unequivocal in its purity, and yet uncompromised at the same time. The

“Rain. There’s no stopping though: the goal always was to reach Edinburgh roof down”

suspension copes with the often tortuous tarmac that passes for roads in the UK, the body control, the feel and feedback through the brakes, steering, and your backside – even here with the lesser connection brought by the more cosseting comfort seats over the more desirable Sports Buckets – such that you can’t help but become completely immersed in it. I’ll admit I was tired when I arrived in Northumberland to pick up the Speedster. A few busy days working, an eight-month-old boy who wakes frequently, and a 250-mile drive to get there was not the best build up to an overnight drive. I’m wired now though, the Speedster a 503bhp stimulant that exhibits poise and focus without vice, unless of course you’ve got the roof down.

I have, and upon approaching the Scottish borders the inevitable happens. Rain. There’s no stopping though: the goal always was to reach Edinburgh roof down. It’s warm enough, just, with the heater on full and gloves on. The rain, when it comes ever harder, does not reach the interior, even when the velocities are necessarily low as we trickle sensibly and as quietly as possible though sleepy villages and towns through the Scottish borders. Out of town the weather, combined with the autumnal mulch and countryside detritus on the tarmac, makes for sometimes treacherous conditions, but the Speedster remains resolute in its composure. It’s wearing Dunlop Sport Maxx Race 2 tyres, OEM fit and, some say, inferior to the headline Michelin Pilot Sport Cup 2s. With some heat in them though the Dunlops are doing an admirable job in exceptionally tricky conditions, with huge traction on offer and fine grip, with only deep standing water causing them any issues – as they would any tyre of the size and width fitted to the Speedster. 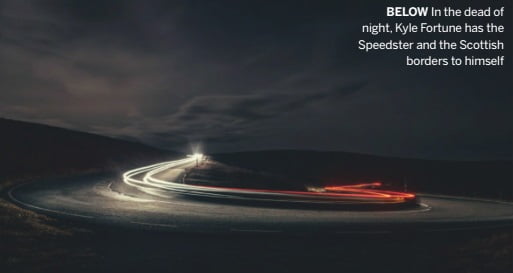 BELOW In the dead of night, Kyle Fortune has the Speedster and the Scottish borders to himself

There’s more standing water as we get closer to Edinburgh, the rain now sometimes falling as snow, but it’s too wet to be lying at the sides of the roads. The city looms ahead, and the temptation to drive further north to ever better roads in the Highlands is high, but one we’ll not succumb to on this occasion. Driving through Edinburgh’s city streets after midnight in the pouring rain with the roof down does garner some unusual looks from a few late-night revellers making their way home. We’re at the mercy of traffic lights here, the last few miles punctuated by them, resulting in a soaking that’s been avoided by velocity in similar conditions over the last 100 miles or so. We head to the Royal Mile, then the Castle, and the Cannonball restaurant, our tenuous link to the Speedster here and one you’ll have to believe me on, as there’s no number outside it.

I’m biased, but rightly so. Edinburgh is a beautiful city; even in the dreich conditions we’re visiting it. We admit defeat at our destination, saving the interior from drowning and putting up the roof. It’s easy enough, its shape lengthening the Speedster; it’s a 911 that’s strangely devoid of its characteristic silhouette, not helped here by the lack of the contrasting black stone guard which helps break up the expansive flanks. 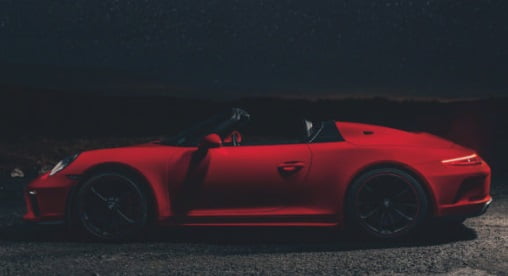 My respect for it has grown even more, despite my usual reservations about open-topped cars, and this example, number 305 of the 1,948 build series, having a slightly unusual specification, with no Chrono and Sports Bucket Seats being glaring omissions for this driver. Even so, the Speedster is so engaging, involving and intuitive, and opening it up only enhances that – dropping the lightweight top reveals more of its character, adding richness to every single, already incredibly detailed facet of the driving experience. That’s true too when it’s freezing and wet – indeed, arguably even more so. The Speedster’s purity and connection is its defining feature, and also one that’s increasingly rare among modern performance cars.

Pardon’s done, we pack up his wet gear and leave town for the drive back. I know I’ll revel in every single mile of it, despite the conditions and the lateness of the hour. The route, as yet, is undecided, because if you get the opportunity to experience a car like this, the destination is irrelevant – the drive is incredible. If you’re one of the lucky 1,948 owners, you have to do this kind of thing, and often. The Speedster is a car that must be driven. To not do so is an affront to it, the people who created it, and every single one of us who’d like to… again.