THE MIGHTY MID-ENGINED CORVETTE STINGRAY IS ONLY A YEAR AWAY FROM OZ, BUT WE COULDN’T RESIST DRIVING IT FIRST IN CALIFORNIA. Read our Chevy Corvette Stingray Z51 Review.

YPE SWIRLS AROUND the new Corvette Stingray like few other cars in recent memory. In the US there have been rumours of a mid-engined ’Vette for decades and people are drooling at the prospect, or outraged that more than 65 years of front- engine heritage has been betrayed. It seems to offer the most outrageous value and yet packs a 6.2-litre V8 with 369kW and 637Nm, and an 8-speed dual-clutch gearbox.

US magazines have already recorded sub-three-second runs to 60mph (97km/h) and 0-100mph (0-160km/h) in the low 7s. This from a car that starts at just $ in its home market, or $ less than a Cayman S. No wonder there’s so much hype. It looks like Corvette has democratised the supercar.

Let’s not spend too long worrying about what went before and whether placing the engine behind the driver is sacrilege or simply progress. Holden has announced that the Stingray will come to Australia in right-hand-drive form, so what we really need to know is whether this thing is any good. If Chevrolet has finally built a car to take on and beat the rest of the world and it’s available to buy here through your local Holden dealership… well, who cares about talk of legacy and heritage and all that nonsense? Don’t tell anyone I said this, but most of the older Corvettes sucked anyway.

Sadly, the stylists weren’t as keen as the engineers to cut the baggage loose. The inescapable truth is that the C8’s styling is rather conservative, slightly clumsy and very definitely weighed-down with all that history. There’s drama in the shape, but park it beside something from McLaren or Ferrari and it looks heavy-handed and rather dated already. Even in the context of a 718 Cayman, the Stingray looks like it’s trying way too hard. A shame but maybe not a deal-breaker, as there’s so much good stuff going on beneath the fussy lines.

The C8 is built around a central aluminium spine, essentially a three-sided box-section that’s closed for added stiffness with a carbonfibre panel. Aluminium subframes bonded and screwed in place carry the double-wishbone suspension all round and cradle the powertrain.

WHO CARES ABOUT TALK OF LEGACY AND HERITAGE? MOST OF THE OLDER ‘VETTES SUCKED ANYWAY

The Stingray weighs 1530kg dry. I wish it were a little lighter, but the chassis is a hell of a piece of engineering for a car that will be built in great volumes – up to 40,000 a year – at a pretty reasonable price. Encouragingly, the thing you notice when you walk around the C8 for the first time is just how low they’ve managed to locate the engine in the chassis. Dimensionally, it’s full-scale supercar – longer than a Ferrari F8 Tributo and with a significantly increased wheelbase, a shade narrower and 28mm taller.

Now, let’s talk options. Not leather and infotainment packages – of which there are many – but performance options to unleash the Corvette’s sharpest, most focused character traits.

The big one is the Z51 Performance Package, which comprises uprated suspension with manually adjustable threaded spring seats, bigger brake discs with four-piston monobloc calipers all round, enhanced cooling, shorter gearing, electronic limited- slip diff, performance exhaust and a fixed wing. It’s a USD option and our Rapid Blue Z51 test car has the additional benefits of Magnetic Selective Ride Control. It’s also fully loaded with the 3LT interior, has Competition Sports Bucket Seats and a few other goodies to take the total to USD$. That’s a chunk more than the headline-grabbing base price, but still spectacular value.

Jethro found the new Corvette to be more of a comfortable cruiser than a serious corner carver, even with the Z51 Performance Package

BELOW Traction is a C8 strong point, especially with the Z51’s upgraded rubber 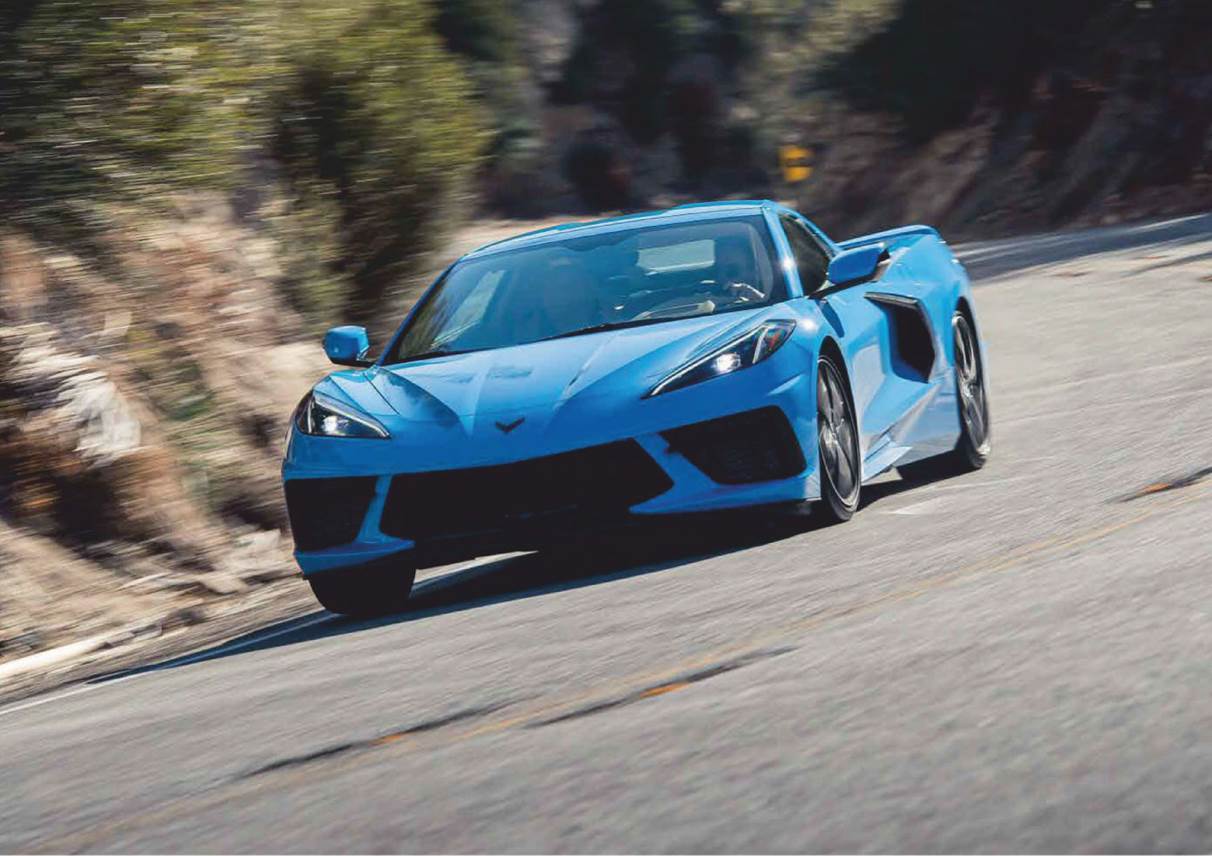 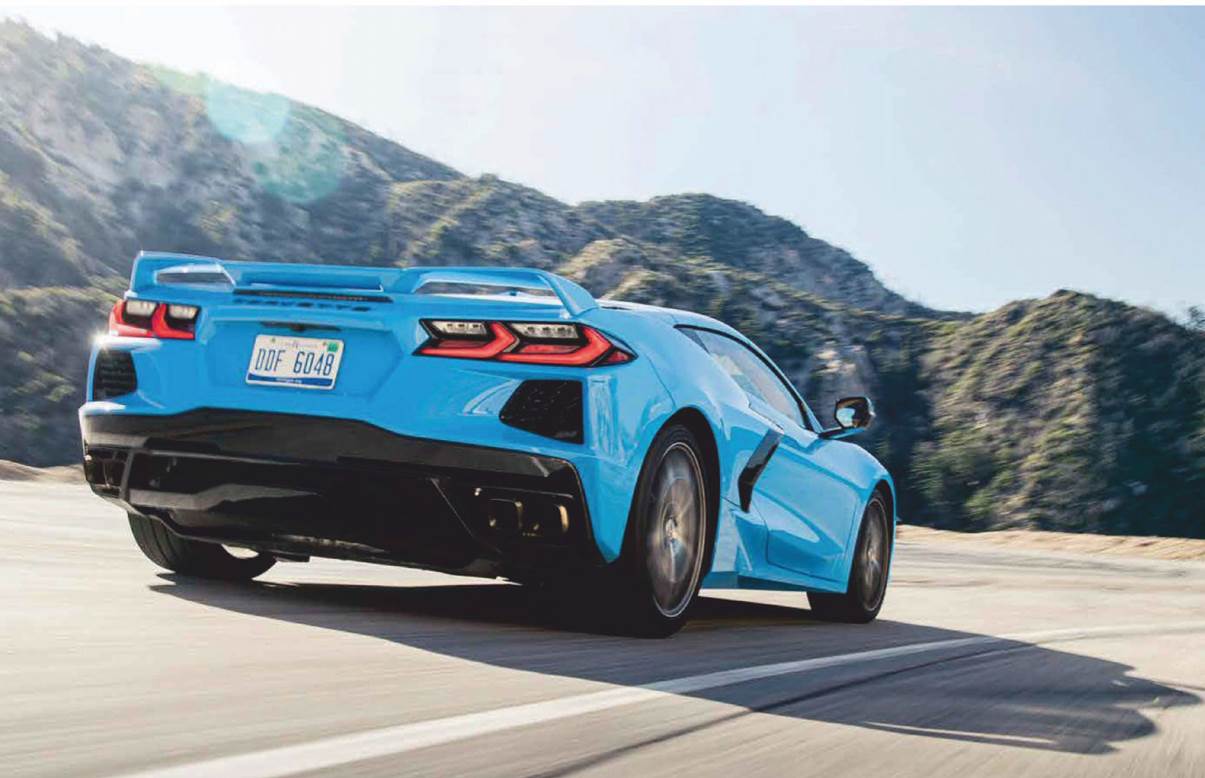 Swing open the door and drop into the tight-fitting seats and you’ll remain convinced that’s the case. The square-topped steering wheel looks odd but gives a fantastic view of the instrument binnacle, and the intensely driver-focused layout shows the C8 team really cared about the person in the hot seat.

The V8 starts with a nice, big boom but settles back to an almost restrained idle, and even when I hit the Z button on the steering wheel that has been pre-loaded with Sport or Track settings for most parameters, the noise is pretty polite. The C8 has Weather, Tour, Sport, My Mode and Track modes as well as Z mode, which you can shortcut to via the aforementioned button. The small-block’s smooth, slightly distant noise suggests powerful GT car rather than hair-on-fire supercar.

First impressions continue along the same theme. The ride is extremely good – quieter than even a McLaren with its trick hydraulically linked dampers and lack of anti-roll bars – with a lovely sensation of well-oiled smoothness mixed with effortless precision. Sport is the sweet spot, as Track goes too far for even quite smooth roads. It’s nice to feel such defined steps between the modes, though. The electric power steering also has various weighting options but in essence is light, very clean in feel and reaffirms a sense of inherent agility if you avoid the needlessly stiff and sticky-feeling Track mode.

Quite simply, there’s a polish and fluidity here that I haven’t experienced in previous Corvettes and the dynamic package immediately feels poised, alert and yet well within itself. And I love the driving position; you sit so far forward and have an amazing view ahead, very much like an original Honda NSX.

The engine is naturally endowed with a fabulous breadth of performance, and such is the traction available Chevy has given the C8 very short gearing in the first two ratios. It’s a nice introduction to the V8’s insistent and linear power, then once you’re rolling along in third or higher you get to feel its any-rev muscle. The LT2 V8 doesn’t have the sweet, cultured tone of, say, the Porsche flat-six in a Cayman GT4, but there’s something intoxicating about the big-cube feel and sound. If only the 8-speed dual-clutch had a tighter, punchier shift. I’m

THERE’S SOMETHING INTOXICATING ABOUT THE BIG-CUBE FEEL AND SOUND

sure the computer says it hits as hard and fast as a PDK but it doesn’t feel it. In fact, you could almost be forgiven for thinking it was a really good torque-converter auto rather than a dual-clutch unit. It needs more edge.

Pretty soon you start to wonder if the whole car doesn’t need a bit more edge. The Stingray flows with a lovely sense of calm, the steering light and precise if a little lacking in texture and feedback, the front-end quick to respond but never manic or jumpy, and there’s so much traction available that once the nose has bitten you can load the rear axle with torque and know it will deploy every last bit. There’s a real efficiency about the way the C8 tackles a road, and it always feels within itself even when you’re starting to really push. Yes, there’s a trace of understeer at the limit, and just occasionally over bumps on corner entry you suddenly sense a lot of weight behind you, but this is a car with real composure even under duress. In fact it positively invites you to up your own commitment to experience everything it has to offer.

What you don’t get is an expressive driving experience or one rich in feedback and adjustability. Try to impose yourself on the C8 by braking hard into turns or really gassing the V8 early in corners and it remains relatively benign and seems reluctant to really indulge the driver. It’s extremely impressive but maybe a shade too buttoned-up.

Having complained about the snappy on-limit behaviour of the C7, it seems unfair to call the C8 too well-mannered, but I can’t help feeling that making it a touch more aggressive on turn-in and a little stiffer at the rear to bring the tail into

play would make for a more intense and exciting experience. I understand this is the entry point for the new mid-engined Corvette and there are faster, more focused iterations to come, but the beauty of rivals from the likes of Porsche is that they play the everyday card perfectly and then offer infinite entertainment and adjustability. A little more of that split personality would be very welcome.

Even so the new Corvette is a deeply impressive car. Its talent runs deep and doesn’t feel artificially magicked out of extreme tyres or crazy spring rates. The feeling of agility and composure is inherent in the chassis, suspension and engine location. Even better is that the car celebrates its mid-engined configuration. The styling had led me to believe the Corvette might feel like its radical new architecture was done begrudgingly rather than embraced for all the benefits it can bring. Yet when it’s flowing down a twisting road and you feel right at the point of an arrow, masses so well controlled and with all that lovely traction to lean on, there’s no doubt the engineers wanted to show that abandoning the old layout wasn’t a necessary evil but instead opened up a whole new world of possibilities.

This standard Corvette Stingray, even in Z51 configuration, isn’t the natural conclusion of that bold step into the future. But it’s a hell of a place to start.

The Specs – Sting in the tail 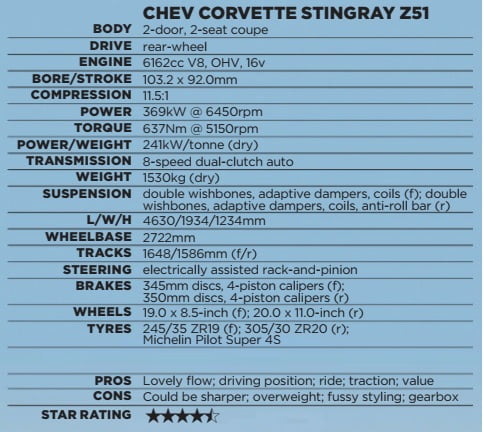 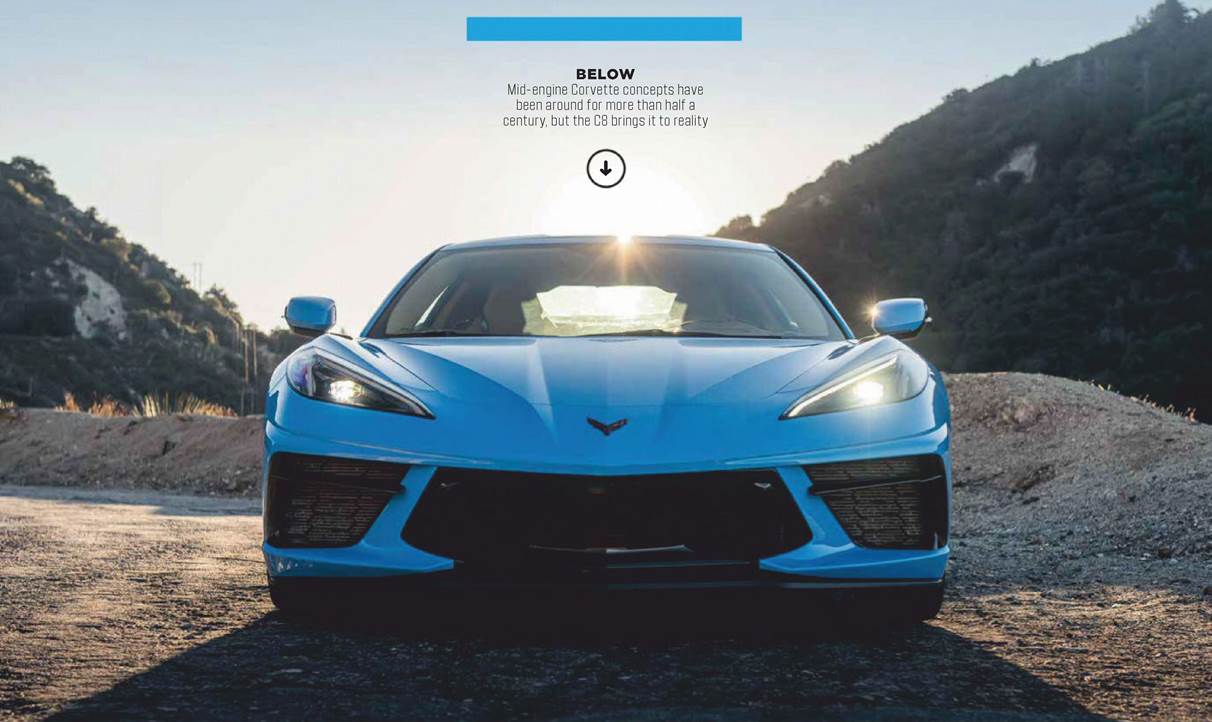